In North America, it's not surprising that New Nordic cuisine has found its most faithful adherents in the cities with the coldest climates. The school of cooking forged by Noma's René Redzepi helps chefs view their local, often bleak terroir with new insight and enthusiasm. But as much as Copenhagen's best New Nordic restaurants have elevated lichen and whey and preserved fish, their kitchens also imbue menus with welcome richness. Cooks use brown butter and smoke their root vegetables. They zap meats with sharp berry sauces for acidic contrast.

All of which is to say that I found Actinolite, one of Toronto's most recently acclaimed restaurants, a work in progress whose food was overly ascetic. Chef-owner Justin Cournoyer opened the 30-seat restaurant in 2012 with his wife, Claudia Bianchi. The convivial, modern space includes a rear bar with sky-blue walls and the kind of light fixtures that, if you squint enough, bring to mind Champagne bubbles. When it launched, the menu leaned to the flavors of Italy, Spain, and Portugal. Feeling like his cooking was mimicking passé trends, Cournoyer began looking at what was happening in Denmark and thinking about his Eastern Ontario childhood. Last September, Cournoyer audaciously scrapped the Mediterranean flavors altogether and began offering tasting menus built on New Nordic sensibilities. 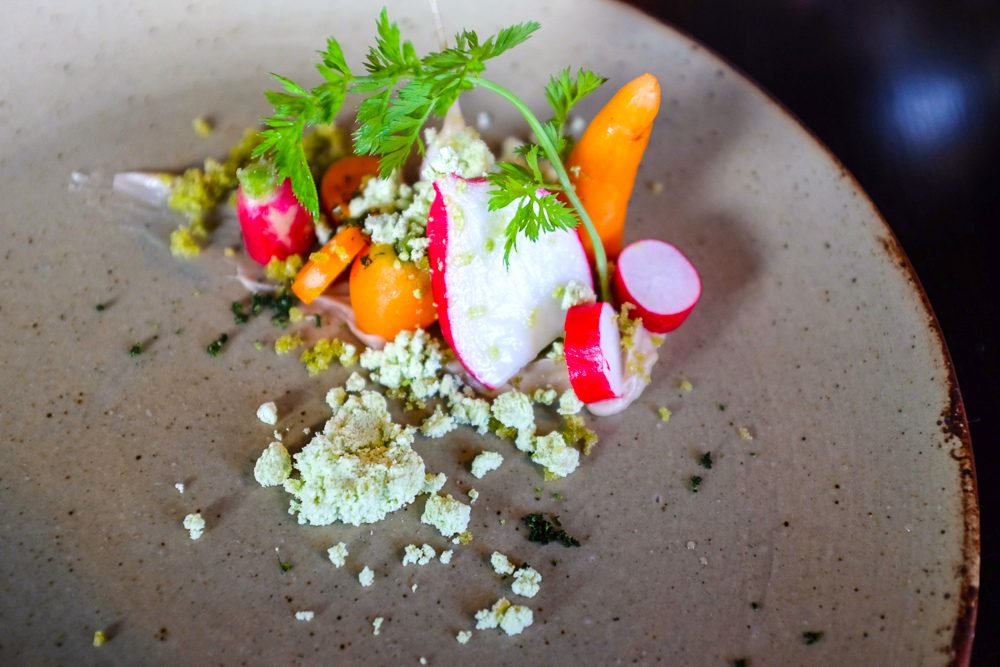 The menu I had in July stayed true to Ontario's growing seasons: It spotlighted the produce that U.S. restaurants in the southern and western states see in their springtime. The highpoint of the seven courses was halibut in a sauce of whey and butter with peas and gooseberries and the flavors of spruce in the form of infused oil. And the elusive herbal qualities in hay ice cream buddied up playfully to strawberries scattered with meringue chips made from curd.

But many of the dishes veered from refreshing and earthy to downright austere. The kitchen goes through great pains to make a crumbly butter out of actual soil, to be swiped with seasonal vegetables. Nifty, and it certainly establishes a sense of place, but then I yearned for the next course to deliver more lushness. Instead, a bowl of shucked Quebecoise oysters arrived in a bowl of oyster leaf and sea asparagus with a faint broth of whey and dulse. It tasted like undressed weeds. And a similarly unadorned plate of cucumber with fresh currants, lemon balm, and fennel felt oddly placed between the halibut and some beautifully cooked sweetbreads with chanterelles and turnips. The wine pairings—white Rioja, rose, Pinot Grigio, Vouvray—helped add nuance to the starker preparations.

Cournoyer has embraced a fascinating transition as a chef. I applaud his mission to challenge palates and more poignantly reflect the Canadian topography in his cooking, but the extremity needs a payoff. The food of an often-unforgiving terrain requires warmth to balance the chill. 971 Ossington Avenue, Toronto, 416-962-8943, website. Open Tuesday-Saturday 6-10 p.m. Seven-course chef's menu $85; summary menu $55 (Canadian dollars). 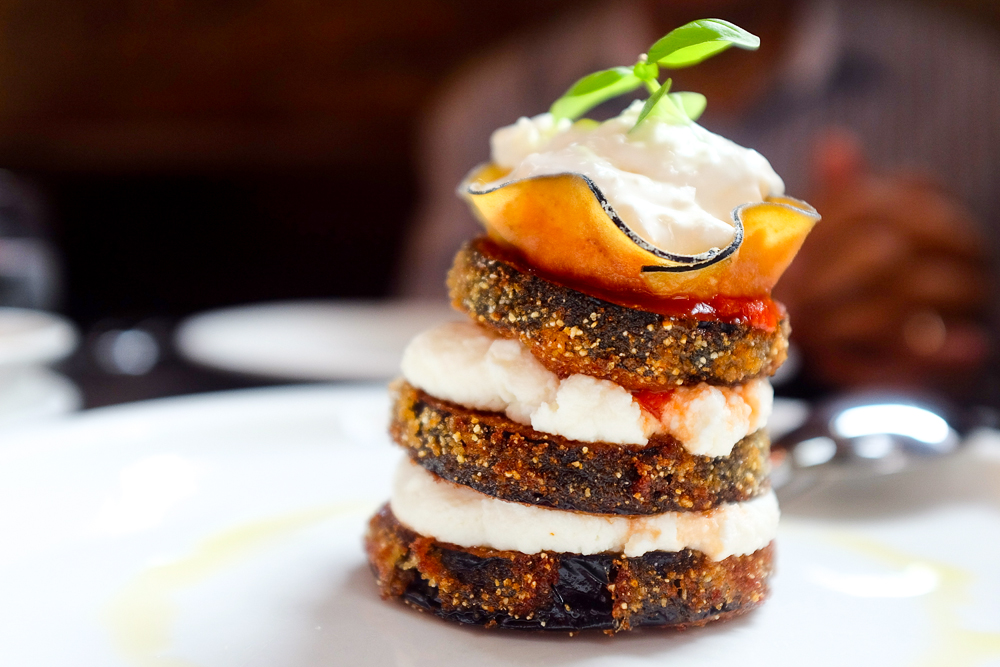 And now for the sun-drenched flavors of Italy: a leaning tower of fried eggplant, layered with preserved tomato, burrata, and buffalo ricotta. Agnolotti stuffed with wild hare and foie gras. Grilled branzino scattered with preserved lemon and slivered olives. Dizzying baba with amarena cherries and lavender cream. Buca, housed in a warehouse-chic subterranean space with a humming aboveground patio hidden down an alley, has been a darling of Toronto's dining scene since it opened in 2009. It shows no signs of losing its party-girl status anytime soon. 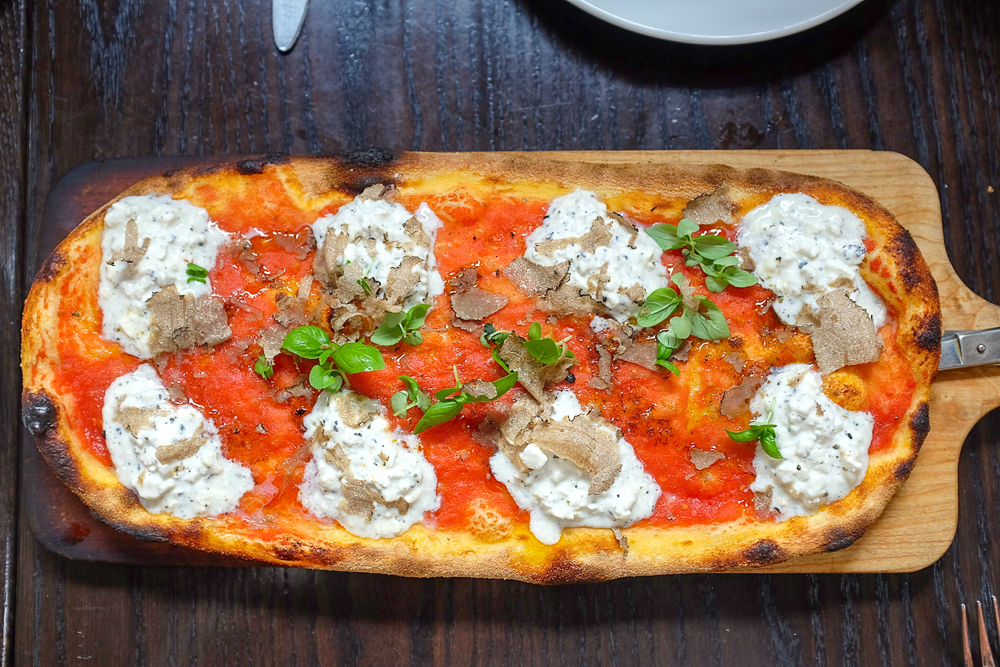 Stunning servers in jeans and black shirts dart across concrete floors, weaving between tightly packed tables. Chef Rob Gentile channels his Italian heritage into deftly cooked, feel-good pleasures. A glassed-in salumeria separates the large dining room from a smaller one: It yields aged beauties like toothy coppa and willowy prosciuttini di cinghiale (cured wild boar leg). Pizzas and pastas feature prominently. How refreshing to find that an oblong, crisp-edged pizza topped with truffled burrata tasted gently of funghi rather than fetid truffle oil. Scialatielli, a thick version of hand-cut spaghetti, cradled sweet bits of spot prawns and a vegetal variation on pesto made with asparagus. The noodles themselves were doughy, though. Gossamer gnocchi deserved only praise: They were made from buffalo milk ricotta and tossed artfully with lobster claw meat, fava beans, and tiny sprigs of basil. 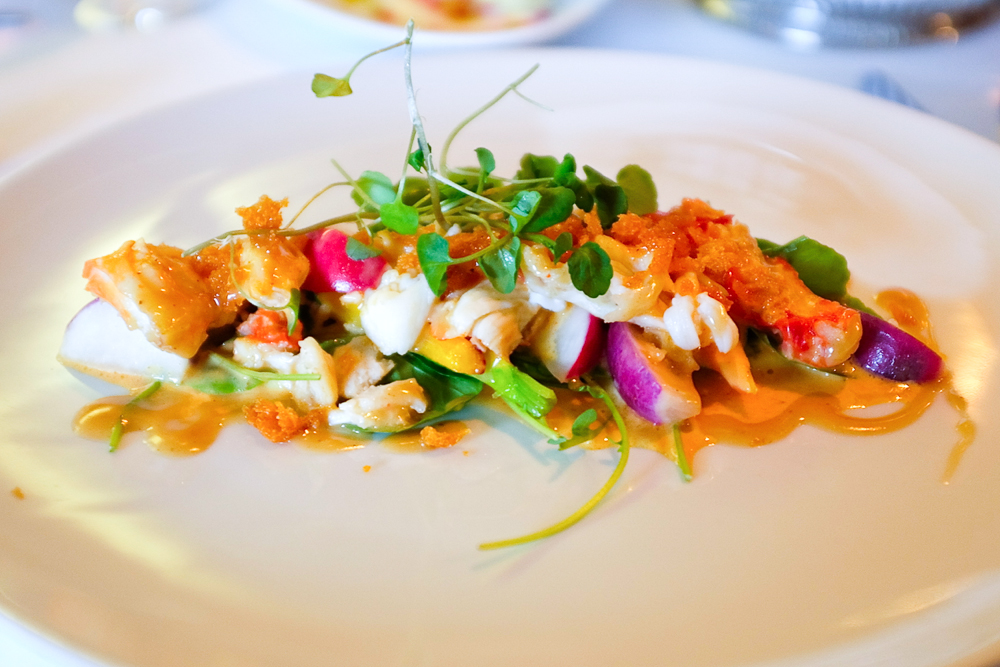 The only thing blatantly Italian about this white-tablecloth veteran is its name, a hat tip to the clown-rogue character of the commedia dell'arte whose image is sketched in wispy pastels on the dining room walls. Open since 1981, Scaramouche is the default recommendation for fine dining in Toronto—a place to take visiting parents, or celebrate graduations, or convene for a business dinner. 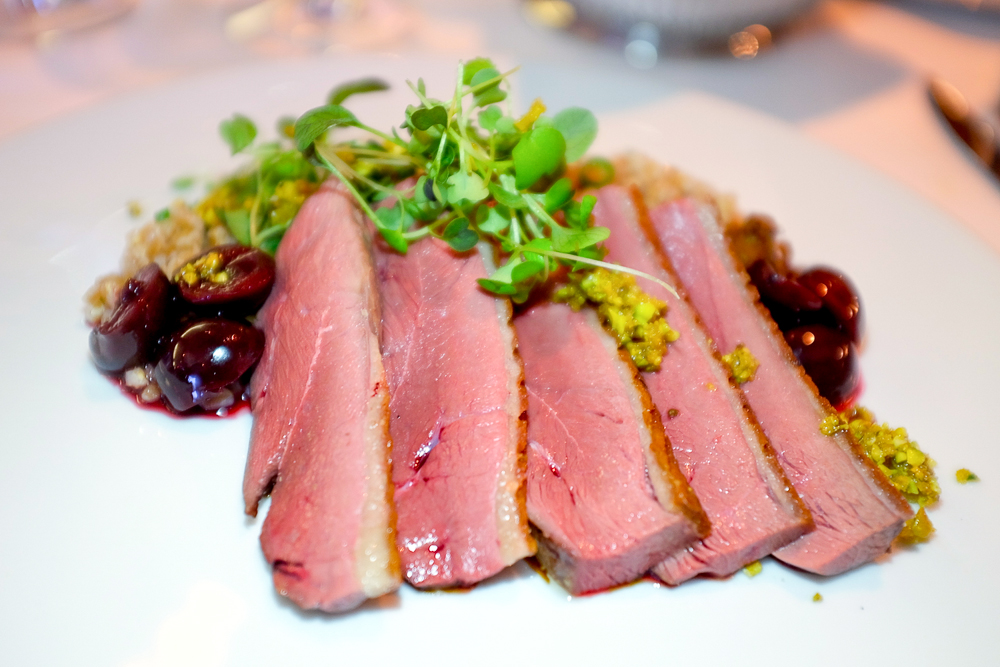 The space itself feels old guard. Ensconced in the bottom of a condo building, the location seems odd until you glimpse the twinkly spectacle of Toronto's downtown skyline through the restaurant's panorama windows. (Despondent is the party that gets stuck in a viewless corner.) The cityscape was misted over from drizzly weather on the night I was there, but I can see how the scenery makes the place a timeless destination.

Longtime Scaramouche chef Carolyn Reid has made sure the menu rolls gracefully with the times: The food appeals to a broad swath of palates but keeps up with current fashions. Edible flowers join micro greens as garnish. Sauces show up slicked across long plates. Dishes are pretty and busy. A lemon-chive crepe disappears into a fray of king crab, radishes, carrots, watercress, squiggly brown butter, and tempura crumbs. Fans of rosy roasted duck breast anchor a plate with farro, pickled cherries, chanterelle mushrooms, and dollops of pistachio-garlic sauce.

There are desserts like vanilla panna cotta with wild blueberry granite, lemon marshmallow, and a shower of oatmeal crumble. Most tables seemed to be ordering the signature 1980s showstopper: a slice of coconut-cream pie festooned with white chocolate curls, which the menu conspicuously notes is available as a whole pie for takeout. One Benvenuto Place, Toronto, 416-961-8011, website; Open for dinner Monday-Saturday 5:30-10:30 p.m. Appetizers $18-$28, entrees $41-$56 (Canadian dollars).
Email Bill at bill@eater.com and follow him at @BillAddison.