After a Decade of Hype, Momofuku Noodle Bar Still Delivers the Goods

Share All sharing options for: After a Decade of Hype, Momofuku Noodle Bar Still Delivers the Goods

In the food world, David Chang is as much a ubiquity as he is a man. But beyond his juggernaut of influence—the ever-proliferating restaurants in America and abroad, Lucky Peach magazine, the line of Asian condiments he’ll soon unleash on the world—there is still the joy of returning to eat at his first business, Momofuku Noodle Bar in the East Village. He opened it in 2004 and struggled at first with his ramen recipes, working with a distributor to hone the noodle’s soft-chewy texture and ditching tradition in favor of a pork bone broth that blew bacony steam onto diner’s faces.

He also added other dishes to the menu beyond noodle bowls, creations that reflected his Korean heritage, his Virginia upbringing, and his time cooking in kitchens like Craft and Cafe Boulud. From his rookie panic and resolve for success came creations like rice cakes in chile sauce with caramelized onions and—they need no introduction—steamed Chinese buns swabbed with hoisin and folded around pork belly squares with scallions and cucumber. Within a year the restaurant would be a phenomenon. Chang’s style merged cultures and dining formats in fresh ways. His bar with the plywood wall that bent the mind serving such sophisticated flavors? It helped to strike a crack in upscale formality that spread until the genre shattered. 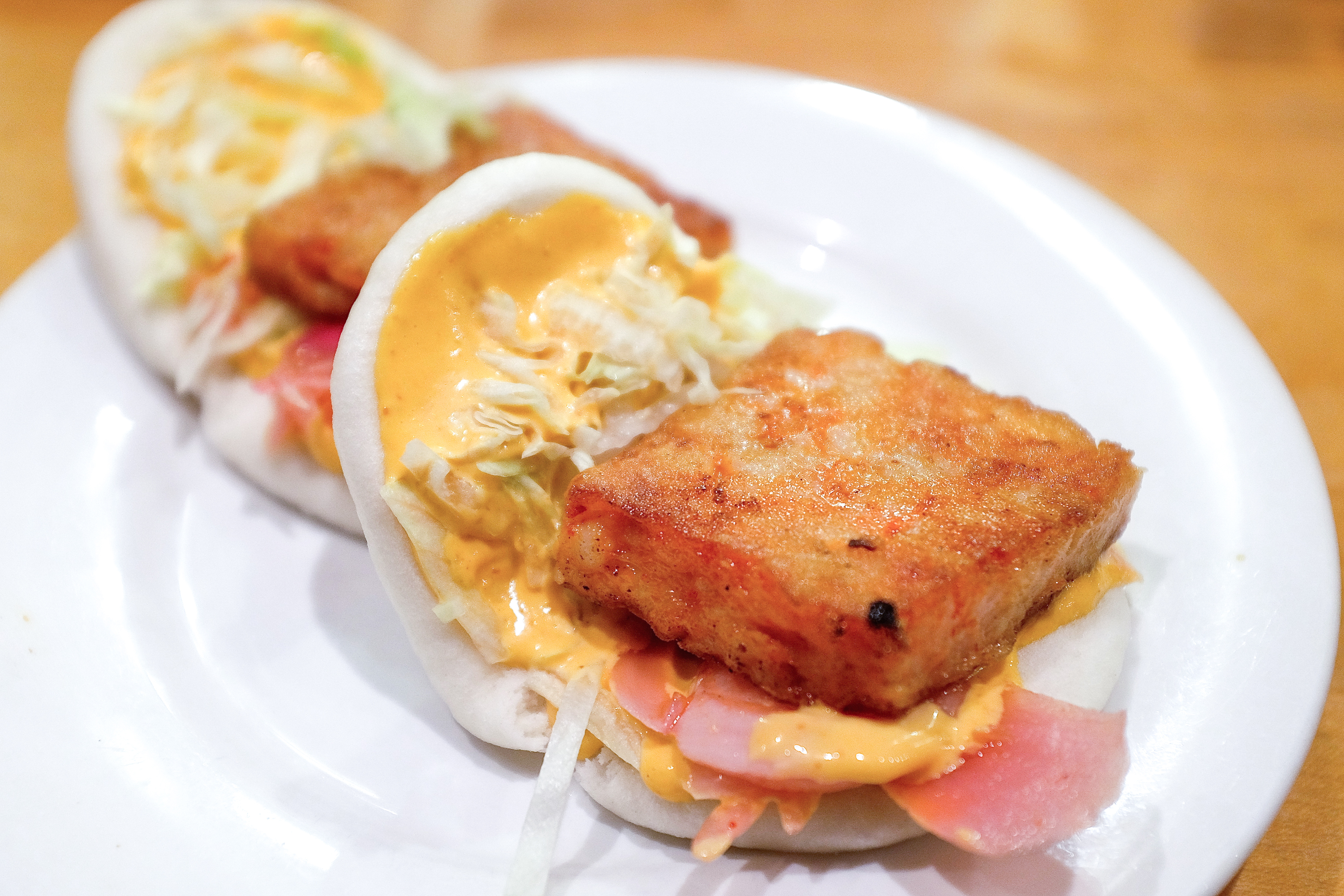 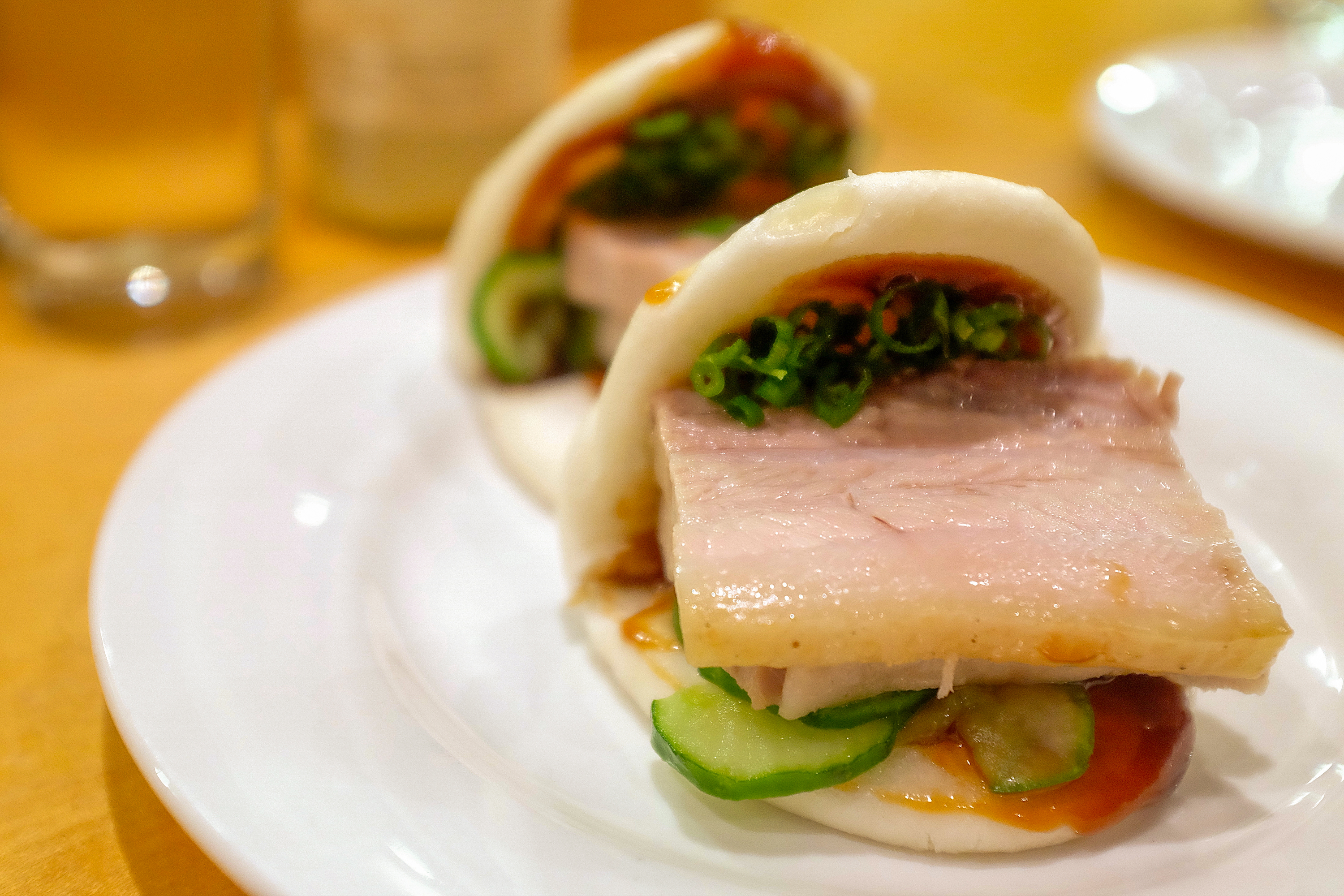 A decade of fetishism and imitation later, I’m so sick of pork belly buns that my vision blurs when they appear on menus. I only want to eat them at Noodle Bar to savor their archetypal rightness: the airy squish to the bun, the ratio of dense meat and tremulous fat, the sweet sauce colliding with oniony sharpness and clean-tasting cucumber. Order a bunch of dishes and the buns often arrive first. Nothing compares to the original but other persuasive variations entice, including an oily-crisp shrimp cake with spicy mayo, pickled red onions (sometimes they’re shallots) and shredded iceberg lettuce.

Last month the restaurant served a weeklong menu celebrating its tenth anniversary, lugging out some beloved recipes from previous head chefs. Garlicky smoked chicken wings were worth returning to the rotation, as was a witty riff on caprese salad with tofu masquerading as mozzarella and pungent shiso subbing for basil. The chile-slaked rice cakes with their jammy onions made a triumphant return, too. 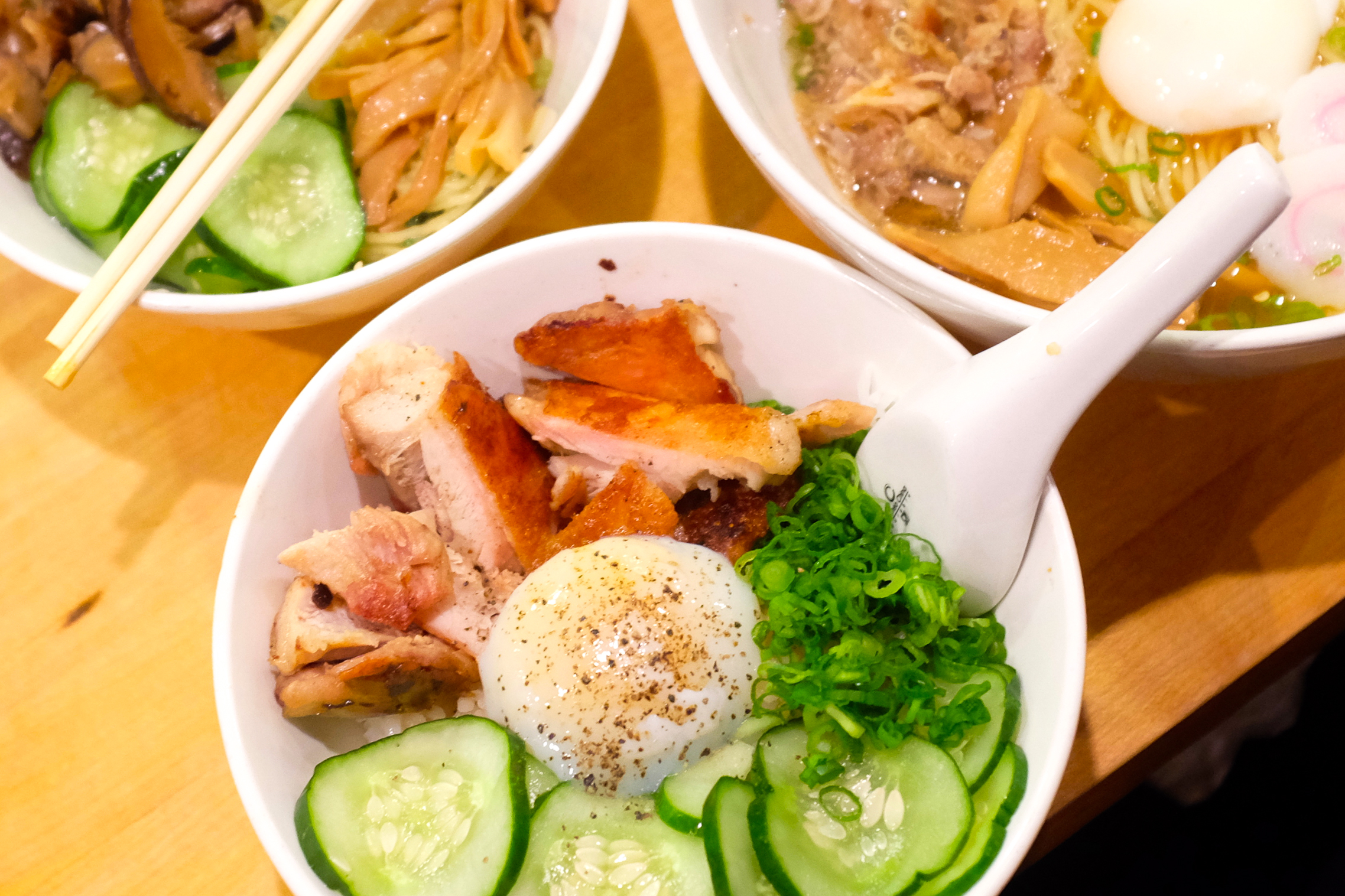 Noodle bowls came last, the de facto entrees. Chang also spurred the ramen wildfire that continues to rage across New York and the rest of the country. Other ramen efforts in the city surpass Noodle Bar these days, but don’t discount the contentment this bowl still delivers. The egg’s yolk enriches and smooths the broth, and the bevy of textures (frilly shoulder, firm belly, pleasantly spongy fish cake, the yielding noodles) ensures that every spoonful is varied. Share another bowl with an eye out for contrast, like the zingy ginger-scallion noodles topped with shiitakes and the cucumbers that the kitchen quick-cures with sugar and salt.

For anniversary week, the restaurant served just one dessert—a peaches-and-cream cookie that references both pastry chef Christina Tosi’s popular blueberries-and-cream cookie and the company’s slogan, "Momofuku means Lucky Peach." If we’d wanted more of Tosi’s sweets, we could have moseyed around the corner to Momofuku Milk Bar.

Of course there was a wait at Noodle Bar, so my friend and I walked a few blocks to Chang's cocktail den, Booker & Dax. We had time for exactly one reviving drink (for me: Creature Preacher, with green chartreuse, pineapple, and lime juice) before a text message called us back to the restaurant. Shuffling through the throngs on the way to our seats across from the kitchen, we looked around and commented on the crowd's extraordinary diversity. The rich stew of faces and languages was so New York—and a testament to how Chang's eldest succeeds not just as an accomplished kitchen but also as an egalitarian haven.

Our review of Momofuku Noodle Bar

Cost
Most dishes $9-$16
Sample dishes
Ramen with pork belly, pork shoulder, and poached egg; pork belly buns (with other protein variations); daily changing vegetable dishes like pea shoots with chicory, sesame, and kimchi vinaigrette
What to drink
The beverage list is concise, with less than two-dozen selections; sake, beer, and cider pair most winningly with the food.
Bonus tip
Unless you’ve made an advance request for the $125 fried chicken meal (which includes both Southern and Korean versions with sides and feeds four to eight people), there are no reservations. Come with patience; the staff sends a text message when your seats are available.