Money raised through tickets to the various events all went to help Fundación Escuela Taller, a non-profit school offering training to underprivileged young people in a variety of fields related to the preservation of cultural heritage, including cooking.

Check out a recap of the talks, events, and some general hangover observations below.

Dominique Crenn's talk — more of a conversation with the crowd than a speech — centered on her observations about the lack of local pride in Colombian cuisine. She noted that in her few days in the country, she had been shown to a number of non-Colombian restaurants and was disappointed more chefs weren't interested in focusing on native ingredients and techniques, especially given the strength of the local market. Said Crenn:

Colombia is a very rich country. You need to take pride in it and understand that the core of any culture is the food. If the food is not there and no one cares about it you don't have any identity. It's your responsibility to learn whatever you need to learn and go back to local and recreate what the gastronomy is because it's amazing. Throughout the meandering conservation she touched on a number of topics, including gender in the kitchen ("The struggle is going to be harder but it's worth it because at the end of the day you're making a legacy not just for yourself but for the youngster, the girl that needs you to be there"), her cooking philosophy ("We have the responsibility to celebrate the product), and her advice for young cooks ("Be who you are, lose your ego, and learn").

The talk ended with famed local chef Leonor Espinosa, inviting Crenn to return to Colombia to explore native communities and meet the women chefs and producers who have valuable, ancestral traditions. And Crenn said she's looking forward to returning. "I'm not from here but I want to be part of it. I take pride in culture. I'm just a student of it, but I want to help them to bring their voice out."

- Narda Lepes gave a very impassioned speech about making better choices in the way we eat. Meat should be a ritual, she said, adding that animals take so much work to prepare — to raise and then kill, gut, butcher, and cook — and people still eat it quickly without thinking. Her other main points: people should be using more native ingredients, be informed about what they're eating, cook more often at home, and avoid processed foods, especially diet foods and drinks. She noted that both chefs and diners need to fix the food system from the bottom up, from the choices they make, every dish, every day. The solution isn't going to come from the Secretary of Agriculture.

- The premiere talk of the festival — and the one that packed an auditorium of the Politécnico Internacional school — was a presentation by Joan, Jordi, and Josep Roca, the brothers who own the lauded El Celler de Can Roca in Girona, Spain. Each brother took turns on the stage talking about the history of the restaurant, their Colombian leg of their world tour, and the importance of four tenets in their operation: landscape, academics, tradition, and humor. They also screened a number of beautiful videos, some humorous, some informative, the best of which explained all of the Colombian dishes they created for their pop-up using almost entirely Colombian ingredients (save for wine and some jamon iberico).

When their talk was over, they were rushed out of the auditorium, blocked from the crowd eager to ask questions.

- Other interesting talks at the festival: Rafael Osterling discussed what Colombia needs to do for its culinary scene to grow and gain more publicity (like Peru's); David Kinch discussed his past, cooking as art vs. craft, and what kids these days are missing; Lucía Solís, an educator and chef from the coast of Colombia, showed off special underused native ingredients and how they should be used; and Renzo Garibaldi focused his talk on meat sustainability. Read the in-depth recaps of these and other talks at the excellent South American site Como Sur here, here, and here.

The Bogota Wine and Food Festival, like many of its ilk, included tasting events, dinners manned by celebrity chefs, seated brunches, demos, food crawls, cocktail classes, and special tastings (in this case, coffee and chocolate).

The standout event, called Barbacoa, took place in the restaurant-cum-nightclub-cum-party-palace Andrés Carne de Res located about 40 minutes outside of the city in Chia. Here, in a portion of the compound that seemingly seats thousands, three chefs grilled up meat for hundreds of guests. The most popular attraction of the night: Renzo Garibaldi butchering a cow live for the crowd, and then auctioning off the meat afterwards.

- Chef David Kinch, whose Manresa restaurant suffered a debilitating fire earlier this year, said he's hoping to reopen in time for Thanksgiving but that will all depend on construction. He's thankful that the town of Los Gatos has been so helpful in fast tracking his permits. - The Meal of the Weekend took place at Leo Cocina y Cava, where chef Leonor Espinosa (the Enrique Olvera of Colombia to many) displayed just how excellent and inventive Colombian cuisine can be. Deploying everything from coconut rice to rabbit arepas with ant sauce, goats shins, and arepas with native ham, she showed what ambitious chefs in Colombia can aspire to.

- There was nonstop talk and debate about the 50 Best list, probably because a) the new list for Latin America is about to be revealed (tomorrow) at the Mistura festival in Peru and b) because it's such easy fodder for conversation in a festival full of both earnest and cynical chefs, writers, and food world hangers on.

- The lineup was much more evenly distributed between men and women than a number of other festivals. BWFF, run and staffed by women, featured as many women speakers as men, including native women from the coast schooling the audience in indigenous elixirs and creams, internationally renown chefs, and local producers and writers.

- A great quote from an audience member in one of the talks, which somewhat sums up the general theme of the festival: "If we compare...countries like Peru and Colombia, if we compare conditions and biodiversity, we are richer in biological recourses. We have the Caribbean, the Pacific, the mountains of the Andes. But if the processes are not articulated with government politics to make the gastronomy of Colombia developed, all of the efforts are going to be just efforts. They are not going to be focused on the main goal which is to export our culinary traditions."

Said another: "People here are used to eating things that are not Colombia. The gastronomy has revolved around everything except Colombian cuisine."

- Which is why it may be telling that a favorite haunt of the festival goers was Gordo, a Brooklyn-themed restaurant featuring a tin ceiling, barrel aged Negronis, homemade tonic water, and a French bulldog logo splashed on walls, coasters, and stirrers. The menu, old hat to Americans (burgers, wings, fried oreos, pork belly tater tots) was well executed and a favorite of the visiting chefs. The chef and restaurateur responsible, Daniel Castaño, spent a decade in Mario Batali's outfit in New York before returning to build an empire in Bogota and Cartagena. 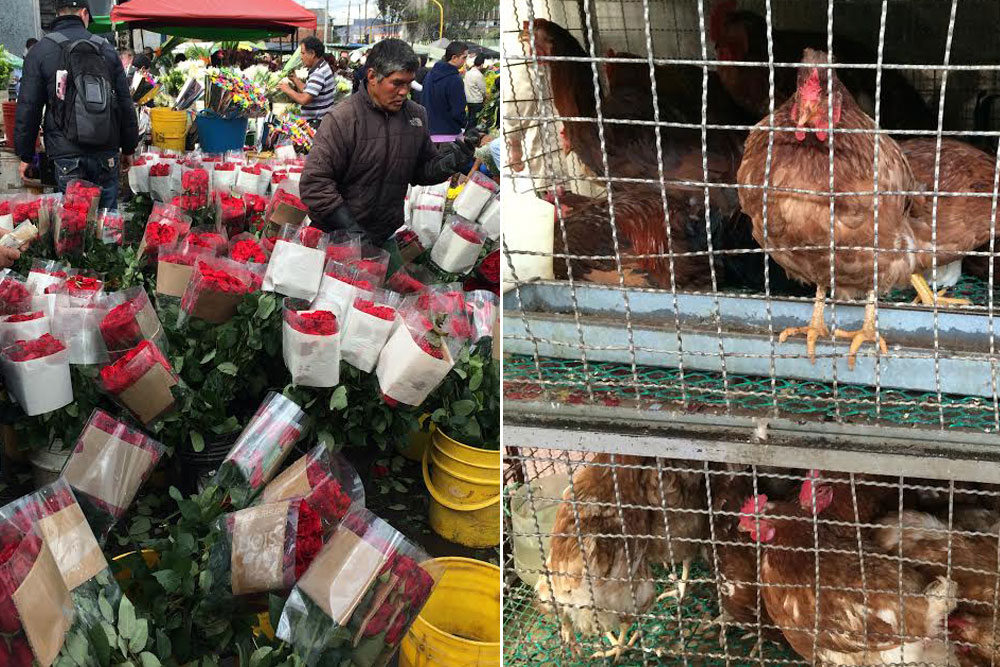 - Many of the chefs and writers got the opportunity to visit the Paloquemao market, a must for any food loving visitors to Bogota. In addition to hosting hundreds of vendors selling an incredible variety of tropical fruits and beautiful vegetables, the space hosts a giant flower market, seafood vendors, live chicken vendors, meat counters, candy shops, and arepa stands.

- Gin and tonics are getting to be huge in Bogota — served in the Spanish style in a huge goblet with lots of ice, quality tonic, and a lime peel — but aguardiente, an anise flavored liquor, is the beverage of choice for many Bogotanos.

- Other favorites of festival-goers: Salvo Patria for the upscale coffee and great food, La Puerta Falsa for ajiaco (a hearty chicken soup that Chef Kinch was partial to) and tamales, Julia for Neopolitan pizza, and Apache, Bandito, and El Coq for drinks/nightlife.