The soft sky, the craggy coast giving way to dense forest and manicured lawns, the endless lobsters and berries: No place unfurls the senses like Maine in summer. Before fall arrives, here's a survey of five restaurants I visited during a recent blitz through Portland:

This nonstop-crowded bar opened two years ago in Portland, specializing in Maine's other seafood star. Gander at the day's selections of oysters mounded over ice on a corner of the counter cut from rugged granite. The menu divides the oysters into "From Maine" and "From Away;" slurp locally with gems like citrusy Pemaquids from the Damariscotta River. Accouterments go traditional (cocktail sauce, mignonette) and inventive (ices flavored with blasts of cucumber and ginger or kimchi). Asian flavors also slip into specials like fried Winterpoint oysters strewn with crisp, shredded pork "floss" and kimchi. 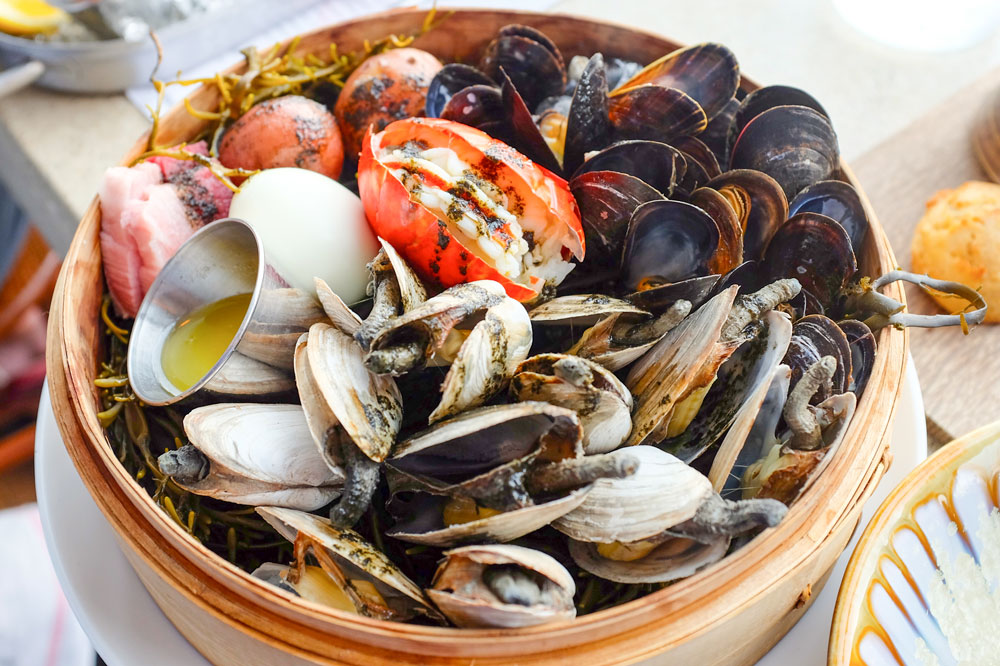 Locals surely relish the changeup of cross-cultural seasonings. I savored the traditional New England dishes: a platter of raw oysters, creamy lobster stew perfumed with sherry, and a condensed but exuberant version of the classic clambake. A basket came crammed full of steamer clams (with their tail-like siphons still attached), mussels, lobster, new potatoes, slices of salt pork, a hard-boiled egg, and drawn butter. To drink with all this? The beverage list was impressively thorough: zippy cocktails, local brews, a selection of white wines that leaned French, and even a smart mix of sherries, sakes, and vermouths. 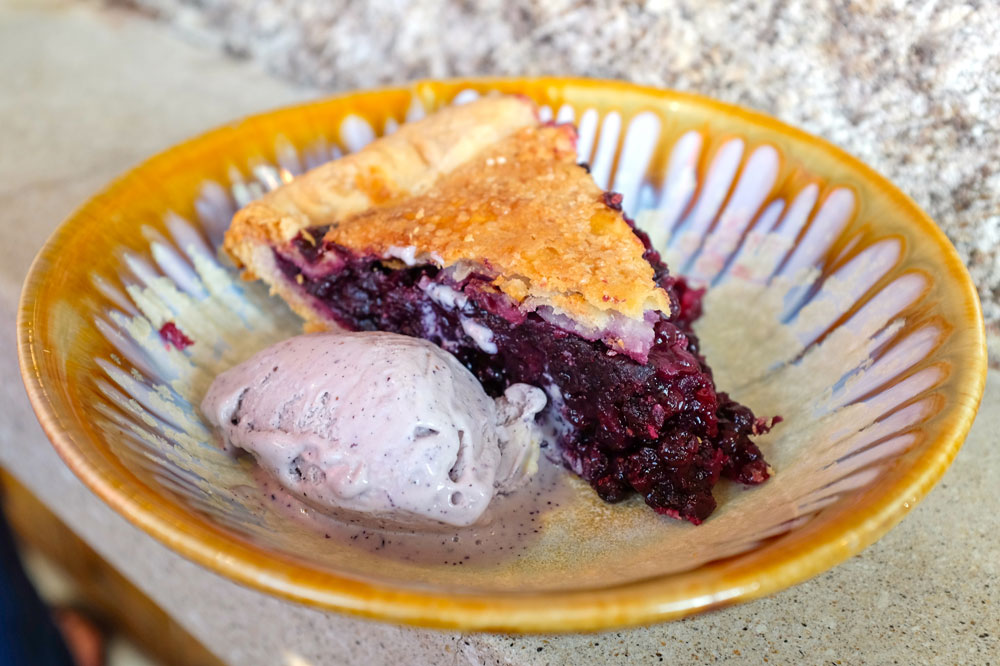 My only complaint: Our server delivered our entire meal—small plates and large—in the course of five minutes. She couldn't rush us out the door before dessert, though. The pie of the day, naturally, was wild blueberry, paired with a scoop of blueberry ice cream. It ably demonstrated why Maine's tiny blues are indeed superior to their plump cousins, with a flavor that was more intense and nuanced, and almost piquant, against the flaky crust. 86 Middle Street, Portland, 207-774-8538, website. Open daily 11 a.m. -midnight. Oysters $14 for half - dozen, $25 for a dozen. Most small plates $6 - $12, clambake $35. 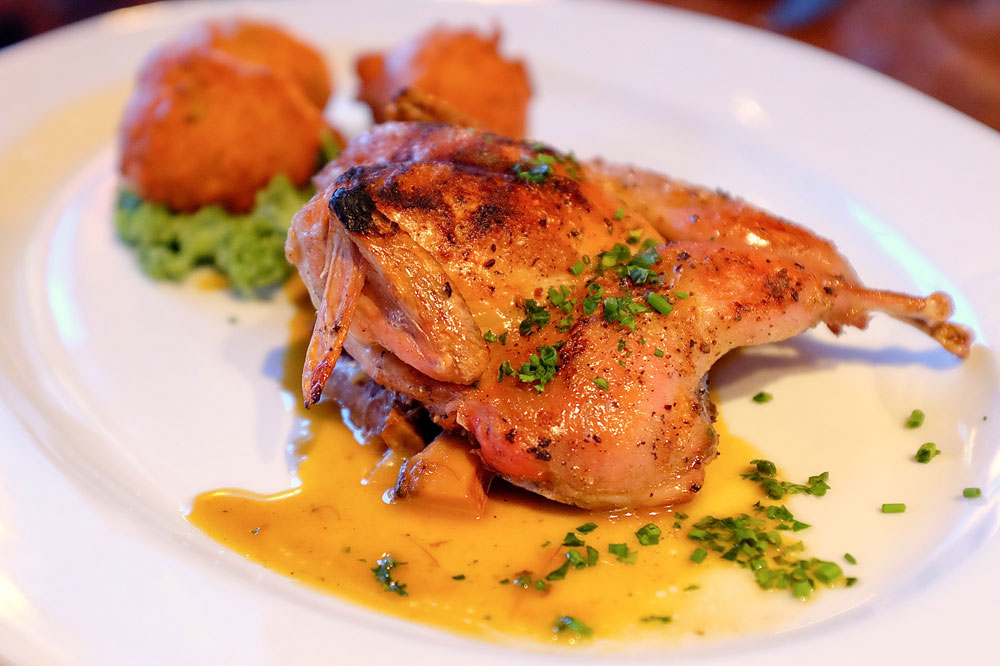 Maine blueberries were on the dessert menu at Portland's defining restaurant as well, but they showed up most memorably at dinner's outset, where they were the sweet contrast in a verdant tangle of arugula, sliced cucumber, and slivered green pepper. It sounds simple, but it was a combination so full of vitality. It reminded me that too many lackluster salads are served in the world. It's a standard reaction to Sam Hayward's cuisine. When he opened Fore Street in 1996, it helped set Portland's now-roaring dining scene into motion. Hayward was an early champion of the locavore aesthetic. He made farmers part of the restaurant community. He used old boxcars for the floors and fashioned tables and other furniture from decrepit farm buildings.

Meaty gusts from the open kitchen's 35-foot hearth greet you before the hostess does. Take cues for ordering accordingly: The menu changes daily (and isn't listed online) but look for high-on-the-food-chain pleasures like grilled quail in unctuous jus with hushpuppies, spit-roasted pork loin with sauerkraut, and a duo of blushing duck breast and crisp-skinned confit. Along with a leafy composition du jour, start with the chilled seafood plate; on the night I dined there it included scallop ceviche, house smoked mussels, and house cured arctic char. Think of the cooking, in its straightforward clarity, as the East Coast bookend to Chez Panisse. 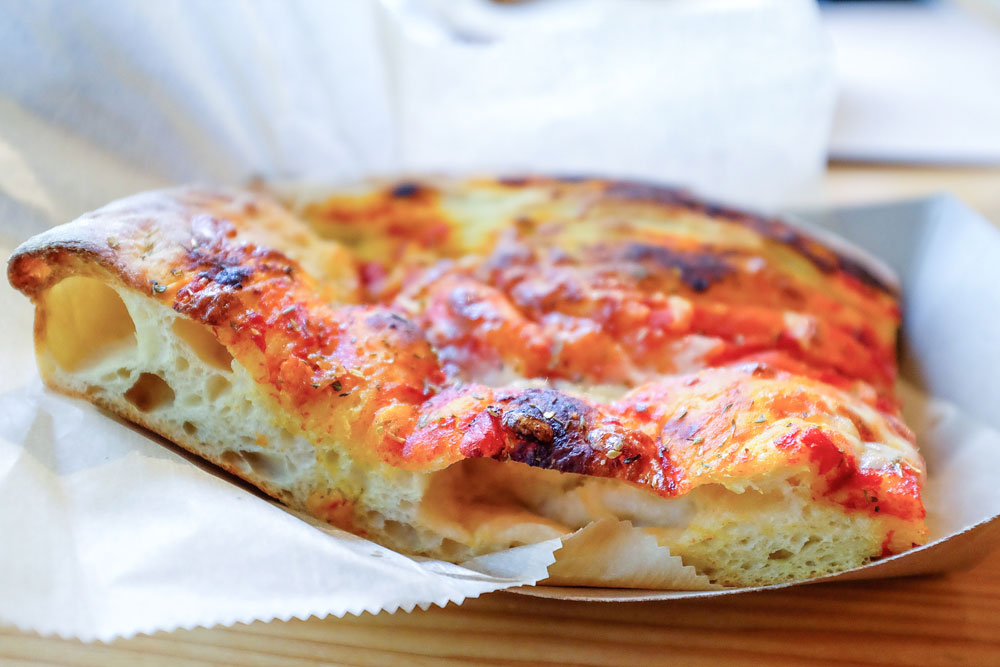 For a town of just over 66,000 residents, Portland has an astonishing range of ambitious and culturally specific restaurants. Case in point: the newly opened Slab in former Portland Public Market building, which serves Sicilian-inspired street food. Stephen Lanzalotta made his name at a local grocery store, baking billowy loafs of flatbread that share little in common with the dense, rectangular pies often served in Italian-American restaurants. To launch Slab, Lanzalotta teamed with four business partners, including Jason Loring, chef-owner of nearby Nosh Kitchen Bar. The beverage of choice is beer, with twenty rotating (and mostly local) brews on tap.

I didn't expect Lanzalotta's specialty—a one-pound slice with a texture between focaccia and Parker House rolls, thinly painted with tomato sauce and specked with mozzarella and provolone—to be one of the best things I ate on the trip. But it was, and the hits didn't stop there. Sicilian is most often referenced as the ancestral homeland of Sunday gravy, and the restaurant duly offers a mean meatball sandwich. But the cuisine is also knotty from centuries of conquest, including from Arab colonists who brought their crops to the island. Lanzalotta honors the heritage with Sicilian street food dishes like hummus, an edifying variation seasoned with whole crushed oranges, turmeric, fried sage, a mere scent of cinnamon, and homemade tahini. Lighten the meal with a side of slaw whose dressing flickers with cumin. 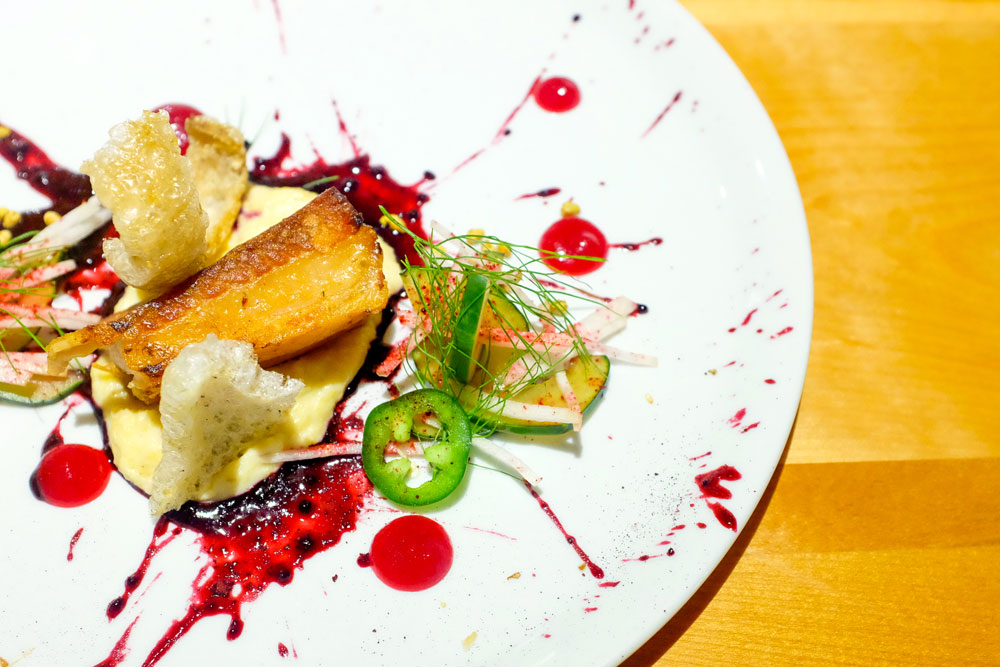 Slab with mozzarella and provolon

David Levi, a first-time restaurateur, set lofty aims for himself when he launched Vinland in January: He prepares food solely from Maine. That includes seasoning ingredients: No black pepper, no sugar cane, no citrus for acidity. To attempt a cuisine so arduously local in a climate that is bitter much of the year, it's no surprise that Levi looks to the New Nordic movement for inspiration. He staged at both Copenhagen's Noma and Sweden's Fäviken. His dining room has an appealing, natural minimalism—light woods, knobby birch twigs covering sound-muffling panels. Though he still likes them crafted as close as possible, Levi makes concessions for alcohol. There are wines from Slovenia and France and Italy, though a cocktail like the Pine Gimlet (Barr Hill gin from Vermont, condensed yogurt whey, white pine syrup) evokes a satisfying sense of place.

The spirit of the approach is admirable, but less than a year in Levi still needs to fine-tune the harmony of honoring his aesthetic while preparing food that tastes balanced. The menu of small plates can be ordered a la carte or in five courses for sixty dollars. Some of it is splendid, like a smooth herb soup refreshing with cucumber and dots of locally processed sunflower oil. A plate of chicken—white and dark meat in a shallow pool of rich stock with squash and an herb sauce earthy with sage—was so satisfying my group ordered a second round, but largely because many of the other dishes had left us wanting.

A broth of yogurt whey, cayenne, and garlic for mussels was oddly sweet. Levi layers on another challenge for himself: His restaurant is gluten-free. As a Southerner I know that sublime cornbread can be made with no wheat; Levi's was a dry, sticky mass. A lovely stack of shaved fennel with yogurt and cucumber needed salt and acid: Could a gentle vinegar be made useful? The elements on an arty plate of pork belly with blueberry splatters, grits, pickle, and pork rind never quite came together. A bowl of blueberries lolling in custard sounded like a comforting finale, but steeping the custard in anise hyssop made the custard astringent and unpleasant.

Misses were acute enough that we spoke up to the server. He nodded and agreed: the fennel dish needed more salt, it would be great if the chef relented and served bread. But it was the pacifying assent of the converted. Levi and his crew will succeed or not on their own terms. 593 Congress Street, Portland, 207-653-8617, website. Open for dinner nightly starting at 5 p.m. Small plates $4 - $18. 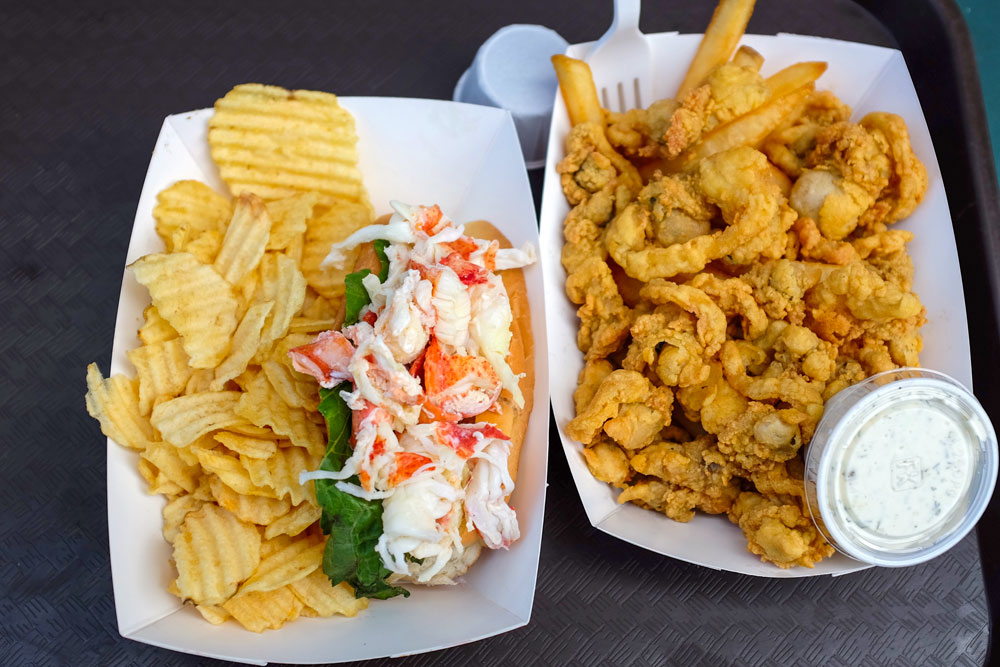 How to choose from among the state's profusion of lobster shacks? I asked a local friend for a suggestion. She sent me to Five Islands Lobster Co., just shy of an hour's drive from Portland overlooking wide Sheepscot River. This is the Maine of the imagination, with views of fishing boats and jutting inlets and the thwack of sea salt in the air.

The encampment has three buildings: the lobster building where the crustaceans, plucked from the river in the last day or so, are boiled in seawater to order; the "Love Nest," which sells lobster rolls and other sandwiches as well as fried seafood baskets; and a storefront that sells Annabelle's ice cream made in Portsmouth, New Hampshire. Arrive early for the broadest selection at the Love Nest. By 1 p.m. they had run out of their biggest enticements, including lobster stew, haddock and seafood chowders, and fried oysters. "Do you still have lobster rolls?" I asked anxiously. "We never let ourselves run out of those," said the woman behind the counter.

For $14.95, it was an indulgence that forever ruins the overwrought versions passed off in big cities. Sweet, toothy lumps with the merest slick of mayo in a hotdog bun with a single leaf of lettuce: That was it. That was all it needed to be. A pile of fried clams alongside gave satisfying contrast. But soon I was back to lobster: a freshly boiled beast with sides of new potatoes, corn on the cob, and melted butter in which to dunk it all. I sat among couples and families at a green-topped picnic table (there is no indoor seating, and it's BYOB), dismantling the lobster and feeling content. Ice cream seemed superfluous after that kind of feasting. 1447 Five Islands Road, Georgetown, 207-371-2990, website. Open daily Memorial Day to Labor Day 11:30 a.m. - 8 p.m., September 6 - October 12 weekends only, 11:30 a.m. - 7 p.m. Prices vary, but freshly cooked lobster around $9.75 - $12.75 per pound (depending on size), lobster rolls $14.95, seafood baskets $14.95 - $18.95.