What's the latest must-try restaurant in Chicago? I'd name the understated charmer that opened in May in Avondale, a swiftly gentrifying community on the city's north side. Top Chef Season Nine contender Beverly Kim and her husband, Johnny Clark, wade into the next-gen fusion fray with persuasive originality. Their place looks low-key, with a familiar, comfortable mix of brick and light woods and a bar-cum-communal table that runs more than half of the restaurant's length.

The menu at first seduces with a similar folksiness. Most customers begin by ripping into Kim and Clark's irresistible version of bing, the Chinese flatbread, given a steakhouse makeover with baked potato dough, bacon, scallions, and sour cream-enriched butter smeared on the side of the plate. Snack-size portions of kimchi, pickles, and watermelon radishes marinated in soy and sake attune the taste buds to Asia.

But the mingling of cultures in larger plates is more deliciously inscrutable. Translucent curls of zucchini and summer squash cover a giant square variation of a mandu, Korea's meat-filled dumplings that aren't so different from Eastern European pierogi or kreplach. A slick of Lebanese labneh underneath bridges the culinary traditions that stretch the breadth of the ancient Silk Road trade routes. The scent of pristine basil leaves scattered over halibut rises up from the plate like summer captured and aromatized. 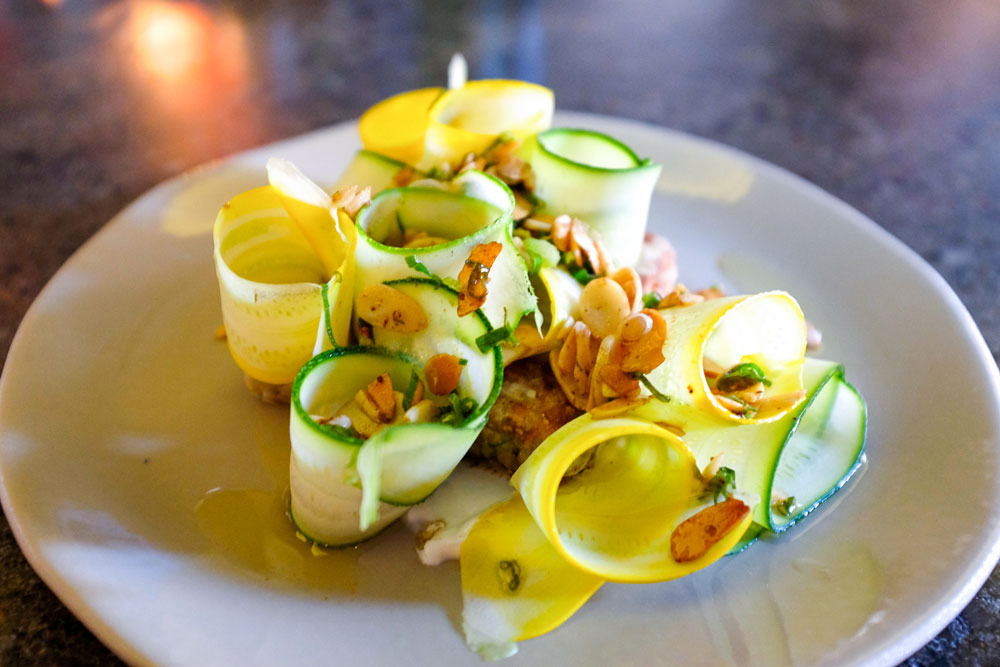 Mandu with zucchini and squash

Wade into slightly edgier dishes, like hand-torn noodles that capture a saucy lamb sofrito intensified with cumin and Sichuan peppercorns. Soon the palate is ready for the most affable possible iteration of boudin noir (blood pudding), its texture as soft as molten chocolate cake and its mysterious sweet-savory flavor played deftly against mint and endive. The couple's take on dol sot bibimbap, Korea's famous rice salad, appears almost too polite with its untraditional barbecued onions, escarole, and pearly slices of albacore tuna. But it arrives blazing—you can catch the muffled sound of sizzling rice like applause heard from a distance—and the bottom layers chars and the ingredients get tumbled and every bite differs. 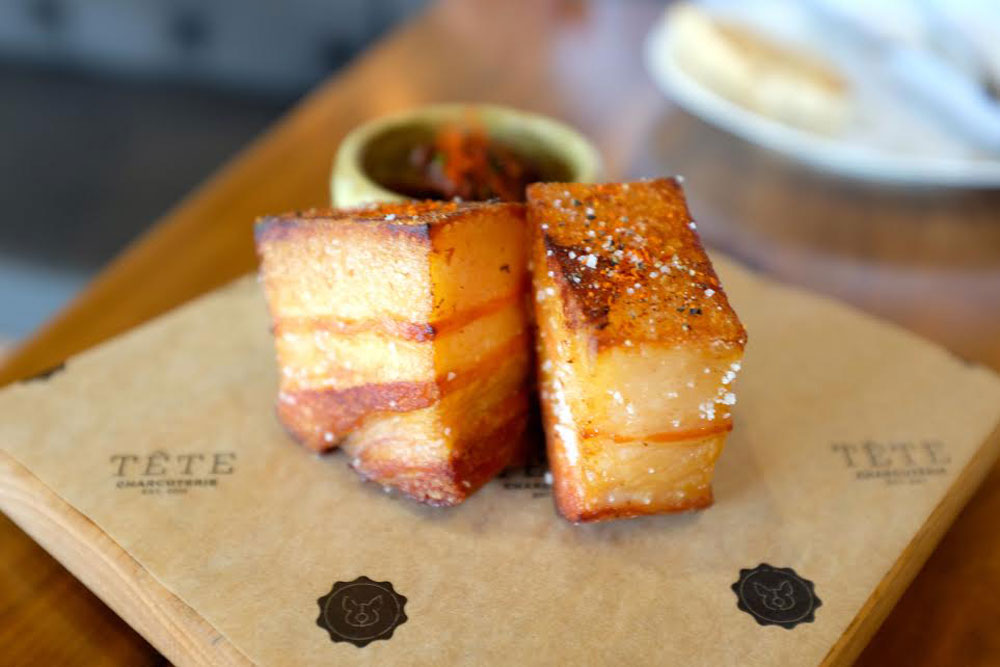 The name says it all. Chefs Thomas Rice and Kurt Guzowski go full-bore—or, more accurately, full boar—on a world tour of preserved meats: Italian salumi, French terrines, sausages from the Philippines and Morocco and Germany, smoked bacon that would be welcome on any American breakfast table. If it sounds dauntingly caloric, know that the dish generating the most buzz since the restaurant launched in March is all flora: A "garden" entree revolves around the seasons. The presentation is a bit more rustic than French chef Michel Bras' painterly, oft-imitated gargouillou of young vegetables. In a sturdy cast-iron cocotte, the kitchen staff carefully layers glossy greens, tiny root vegetables, sliced fruits and other gifts of the earth, some raw and others cooked just passed rawness via grilling or poaching.

Ordering this herbivorous splendor certainly balances pleasures like pork belly rillons, stubby pillars of oink that crackle and melt against the teeth in meaty bliss. The prowess it takes to pull off the garden creation also helps the restaurant stand out from the competition—including Paul Kahan's lunch destination Publican Quality Meats seven blocks away. Tête sits on the developing end of the West Loop's restaurant row, fittingly in a former meatpacking plant. As word gets out that Rice and Guzowski's menu offers more diversity than the moniker first implies, the restaurant should find the loyal audience it deserves. 1114 West Randolph Street, Chicago, 312-733-1178. Open for dinner Monday-Thursday 5-10 p.m., Friday-Saturday 5-11 p.m. Snacks and charcuterie plates $8-$30, entrees $20-$30. 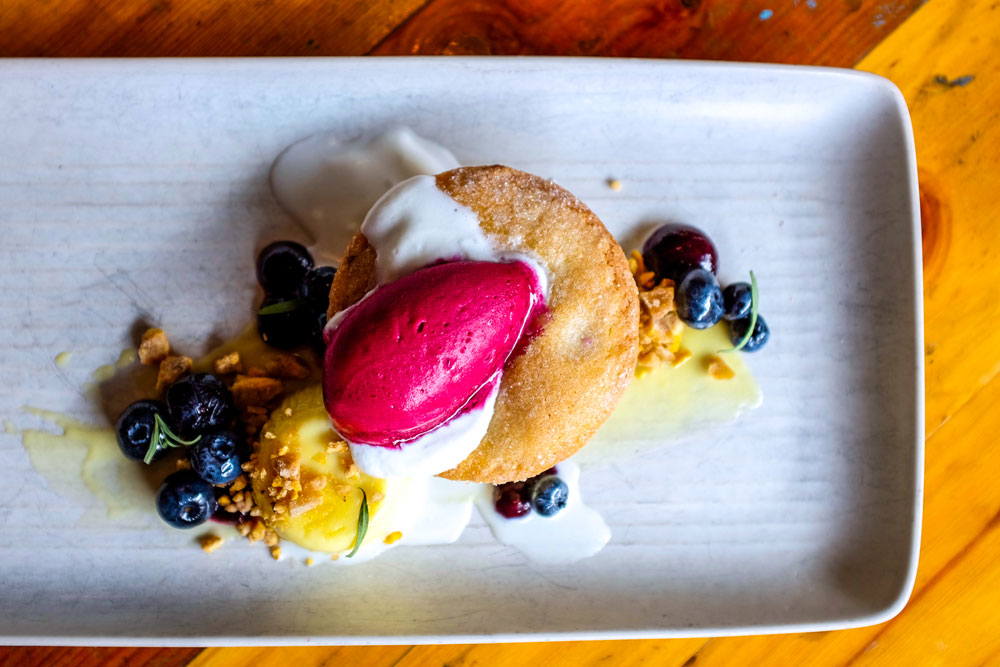 I've had a pastry chef crush on Mindy Segal since 2001, when I reeled over a raspberry crisp she served at Michael Kornick's MK that involved pecan streusel and a tableside pouring of raspberry cream caramel. Segal went solo in 2005, opening a neighborhood draw in Bucktown that woos customers with New American comfort food before they go overboard on dessert.

Hot Chocolate has been a habitual stop on jaunts to Chicago, and a recent lunch only encouraged future visits. Green goddess dressing enriched an otherwise virtuous salad of tender kale, red quinoa, Sun Gold tomatoes, other warm-weather vegetables, and an optional addition of plump grilled shrimp. A B.L.T. on brioche and a teetering bacon cheeseburger (fun touch: crusty shreds of melted cheddar broiled atop the fluffy sesame bun) soothed with their maternal homeyness.

But they couldn't compete with the sweets. Segal and her pastry chef Kymberli DeLost craft temptations for every taste. For something extravagant: a petit, end-of-summer blueberry pie and sweet corn custard, around which swirl blueberry jam, key lime curd, candied corn nuts, a drizzle of cream, and a quenelle of blueberry sorbet. For a simpler joy, try the choice of three ice creams or sorbets, in flavors like triple vanilla, coffee cocoa nib, salted caramel, and apricot. The hot chocolate options are downright democratic in their range: Mexican with cinnamon and cayenne, one laced with espresso, another with chai, even a white chocolate number with mint. Purist will appreciate the French dark with a single, slowly dissolving marshmallow. 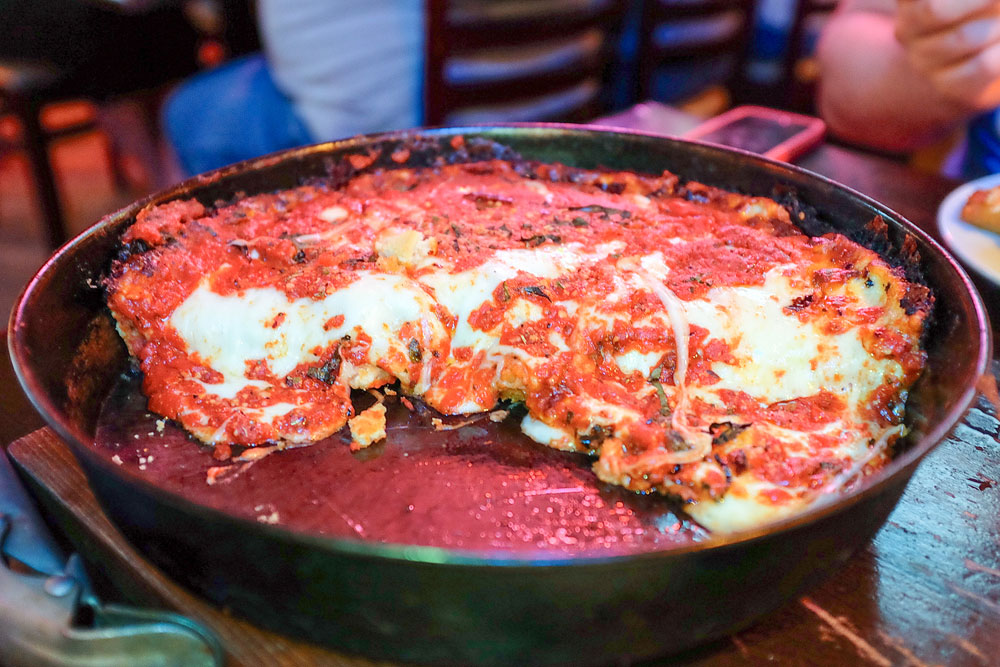 Chicago food writers tend to roll their eyes when asked, "Where's the best deep dish pizza?" But several of them directed me to Pequod's. Burt Katz, a local pizza legend and the current owner of Burt's Place, started the original Pequod's in 1971 in Morton Grove, a suburb just north of Chicago. Katz sold Pequod's long ago but developed the style of pie that the restaurant (with a second location in Lincoln Park, where I ate) still serves: a centrist creation somewhere between thick and thin that bakes in a cast-iron pan in which grated parmesan has been scattered around the edges. The resulting blackened, lacy edge compels more than even the scorched edges of a molten lasagna.

Deep-dish has its naysayers, but one advantage is that it can handle a profusion of toppings: Piling on the sausage and garlic and green peppers gives credence to pizza aficionado Ed Levine's definition of deep-dish as a "casserole." Honestly, a plain pie with extra cheese proved most rewarding in texture, the swampy core buoyed by sturdy crust and the crisp, cheesy exterior. One warning: The staff likely won't bother to mention that a large pizza can take almost an hour to bake. The wait rewards, though appetizers like jalapeno poppers and mozzarella sticks aren't worth the calories to fill the time. 2207 North Clybourn Avenue, Chicago, 773-327-1512, pequodspizza.com. Monday-Saturday, 11 a.m.-2 a.m., Sunday 11 a.m.-midnight. Pan pizzas $6.95-$17.50.