More than any other American luxury restaurant, Grace sits at the intersection of fine dining's past and present. At first glance, the place has an almost impersonal, pre-1980s serenity: creamy, hand-stitched leather club chairs; milk chocolate-colored tablecloths; art that brings to mind asymmetrical inkblot tests. After the eyes acclimate to the dim room, once a pickled herring factory, it's easier to appreciate the elegant grain of the brown ash wood paneling and the voluptuous forms of the columns built to resemble wine decanters (and, indeed, fitted with discrete stations for beverage service).

But the design also leaves no doubt about the real atmospheric centerpiece: the kitchen, gleaming all white and steel and viewed through glass. Tables are angled for maximum observation of the more than 20 cooks assembling your dinner with balletic concentration. The setup reinforces all the modern notions about dining as an event, as participation theatre. 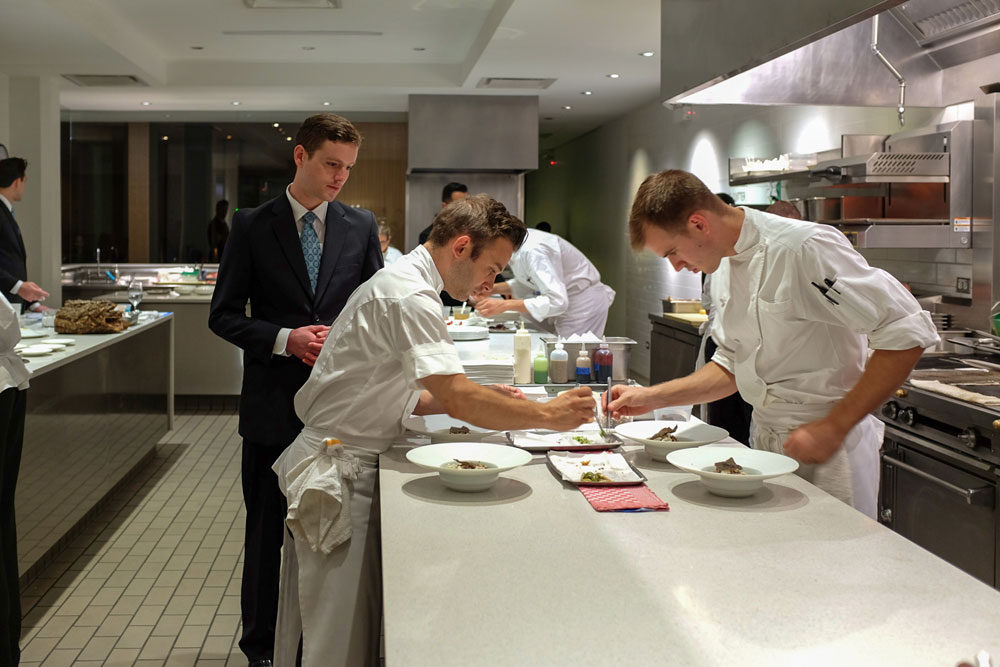 It was a performance that left me feeling uplifted. Grace's chef-owner Curtis Duffy, Eater's 2013 Chef of the Year, has absorbed the techniques of some towering, driven mentors to create his own kinetic style. Along with Corey Lee at Benu and Joshua Skenes at Saison, Duffy is on the front lines, defining the country's next generation of high-ticket dining. He discovered his life's path while cooking in home ec class during a stormy childhood. He moved to Chicago to work for Charlie Trotter and then with Grant Achatz, first at Trio and then as Achatz's chef de cuisine at Alinea. While executive chef at Avenues in the tony Peninsula Chicago hotel, Duffy earned two Michelin stars by displaying the sum of his experiences—food that links Trotter's refinement and love of vegetables with Achatz's wit and showmanship. 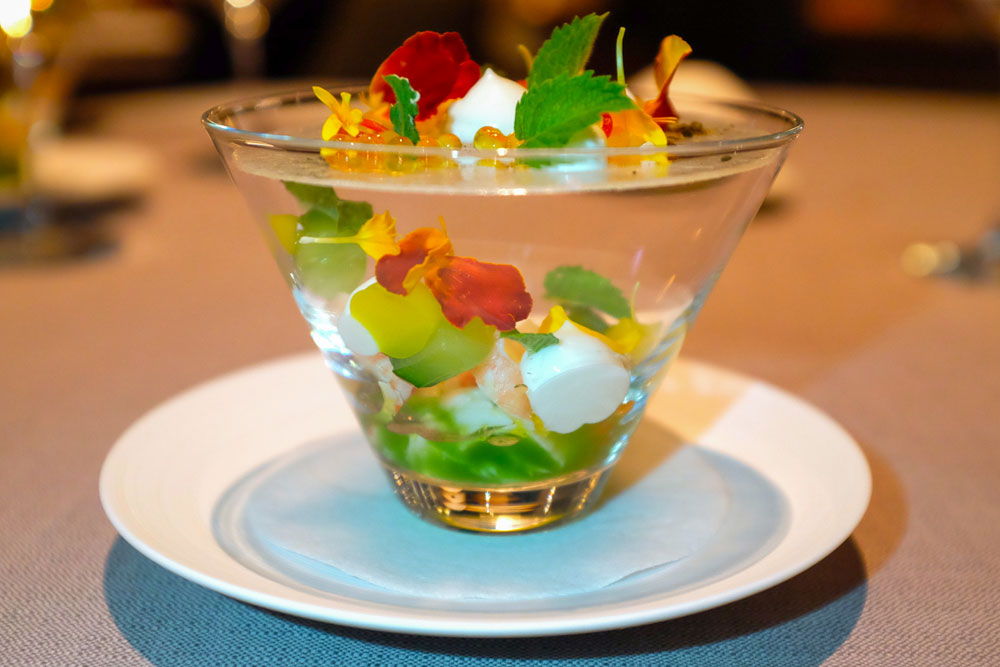 Consider one of the signatures that Duffy developed at Avenues and refined for Grace. Alaskan king crab salad rests at the bottom of a V-shaped tumbler filled with enough flowers and herbs to recall a terrarium. The top is sealed with a tuile of flavor-neutral sugar, a modernist fillip that also slyly references Duffy's time at Trio as a pastry chef. Tap on the glass with a spoon and it shatters, adding fleeting crunch to the crab poached in a citrus stock reinforced by sweet-sour calamansi. Trout roe adds pop, cucumber juice lends astringency, and dollops of cream steeped with marigold and lemon mint (also the flowers and herb in the glass) emit an herbal pheromone. It's a feat of a dish that quickens the senses and leaves the diner energized for what's to come.

The crab is the second course in Duffy's Fauna menu, one of the two prix fixe options the restaurant offers. The other, not surprisingly, highlights Flora. Both cost $205 per person and deliver around 10 to 13 courses—a smaller number than at other tasting menu restaurants of similar cost and ambition, though it didn't take long for the progression to include plates of a substantial size, which I found satisfying.

The meal began with whimsy. Soon after being seated, a gnarly hollowed log arrived, its bark dotted with indulgent bites: an ear of baby corn paired with the juicy beads of finger limes, a sliver of nutty Iberico ham impaled on a metal skewer, a slice of lady finger banana brûléed, and a black truffle macaron that packed a sensual wallop. Then came a small jar containing a morsel of cod and filled with smoke. The contents had the milky opaqueness of yogurt, an effect emphasized by the foil wrapper affixed to the top. Of course there was fruit on the bottom: lychee, contrasted by a dab of osetra caviar. 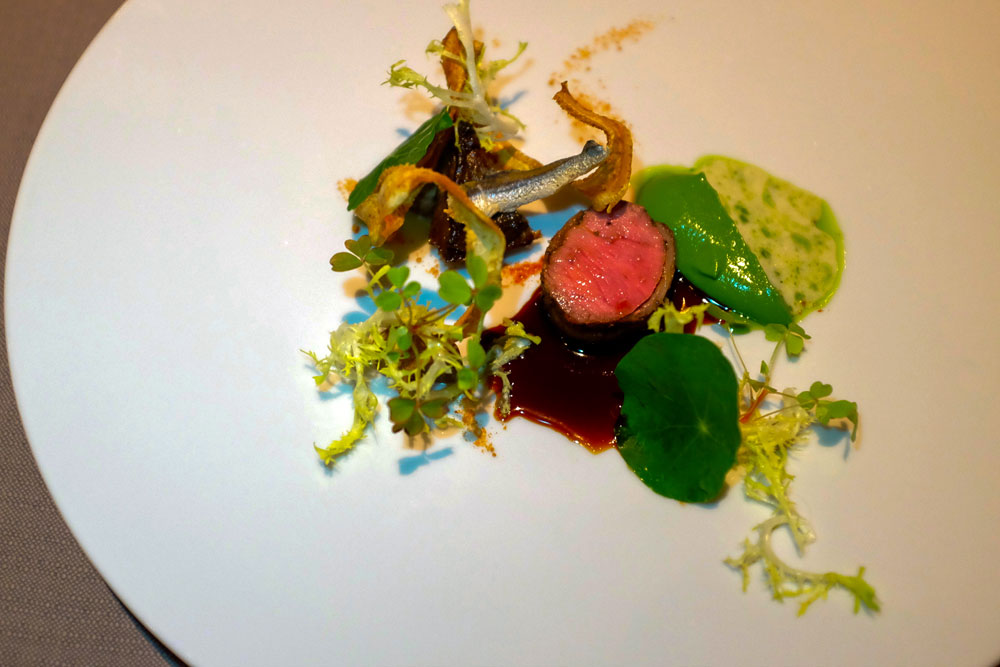 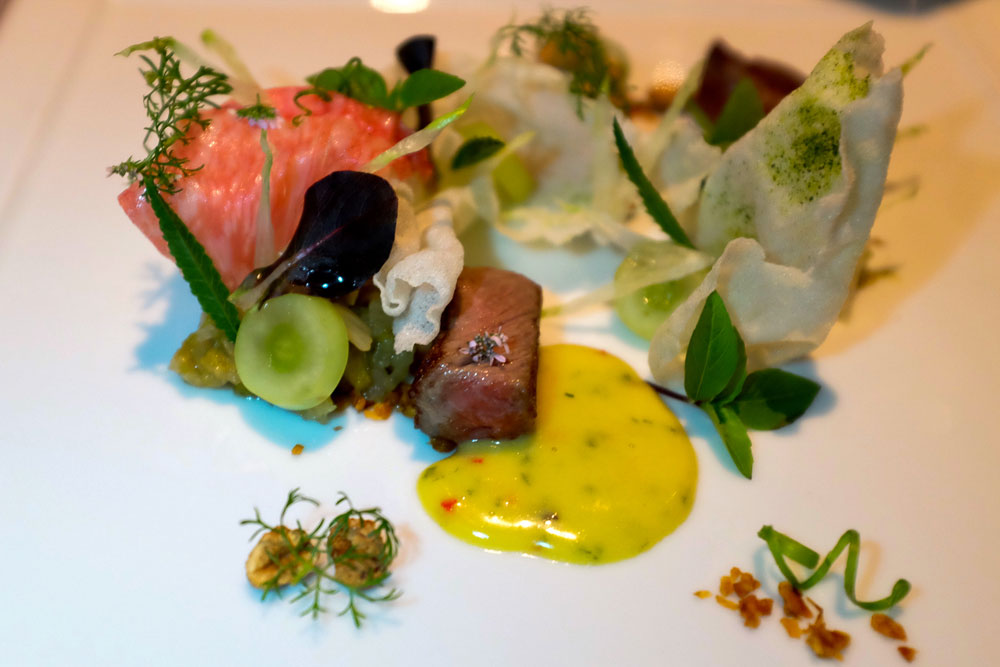 Presentations veered from fetchingly austere (a bowl of green grapes with carbonated juice, blueberries, and green chartreuse ice cream) to rococo, but the ingredients on even the most flamboyant plates always made sense together. An essay on lamb—loin cloaked in belly fat and roasted, pickled tongue—was punctuated with artichoke heart chips braised in brown butter, smoked paprika gastrique, curling white anchovies, frisee, and oxalis, a lemony herb that's part of the sorrel family. The evening's crowning glory was gorgeously marbled beef from Japan's Miyazaki prefecture. Duffy loves this protein and has concocted several stagings for it; this one was in the form of a deconstructed Thai beef salad. Raw and cooked forms of the meat hid among a forest of herbs, romaine lettuce cooked into marmalade, and peanuts both caramelized and pureed. Citrusy tom yum broth, poured tableside, provided the soprano line to the meat's baritone smoothness. 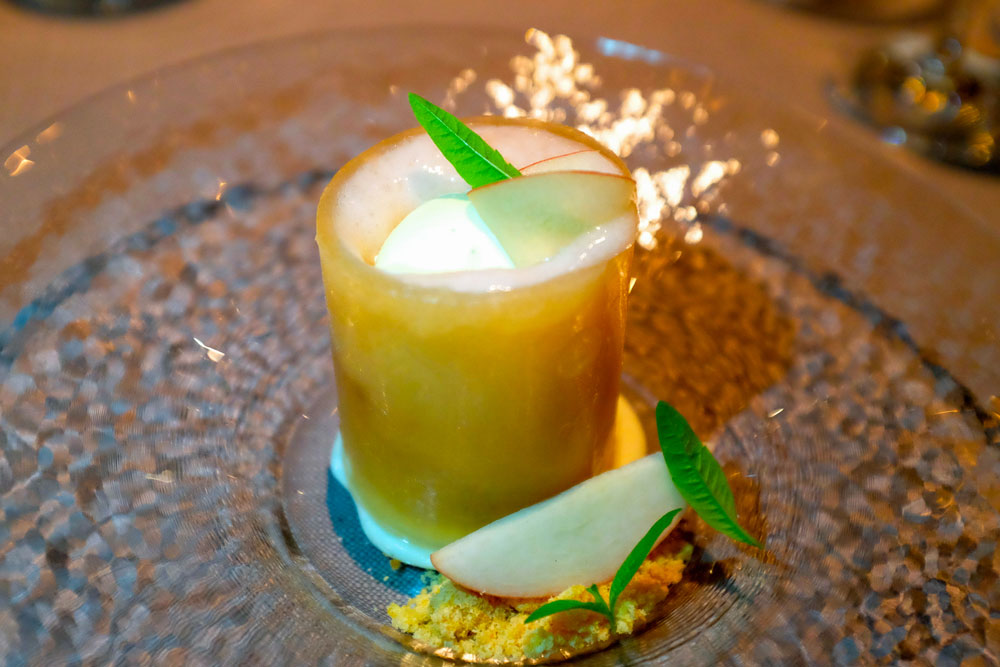 The pastry team stole the show with a peach dessert in a frozen cylinder of jasmine tea. Duffy worked with a mold maker for years to perfect a silicone model that could reproduce the same results night after night. This is the first time the kitchen has used it in a sweet dish, and it was wondrous: Braised and fresh white peaches, cream cheese ice cream, and Champagne foam filled the tea canister, which held its form but could also be easily sliced with a spoon. A lot going on, but the purity of the flavors gave me the same innocent happiness as eating a drippy peach over the kitchen sink.

Duffy receives ample support from general manager and partner Michael Muser, who leads a pitch-perfect service staff and oversees a beverage program that includes a diverse wine list (more bottles in the two-digits than one would expect) and some pricy but heady teas to end the meal. As every critic who writes about this restaurant reports: Don't miss the bathrooms themed to the seasons. Start with winter.

Our review of Grace

Cost
Two tasting menus (one that focuses on Flora, the other on Fauna) are both priced at $205. Wine pairings are available for $125 per person.
Sample dishes
A sumptuous 10 to 13-course meal that's remarkable in its sophistication, venerating vegetables and herbs (even in the meatier menu) yet wowing with some restrained modernist effects. The kitchen viewed through glass in the dining room makes for quite the floorshow, with chef-owner Curtis Duffy as a James Dean-esque leading man.
What to drink
The wine pairings lean heavy on French (particularly the Loire Valley, the current darling of sommeliers), Italian, and German. The wine list runs 25 pages and especially showcases the Loire, the Rhone, Alsace, and Germany.
Bonus tip
Weekends book out nearly two months in advance; it's much easier to get in during the middle of the week at short notice.