A Playful, Singular Take on Italian Food at Philly's Vetri

Share All sharing options for: A Playful, Singular Take on Italian Food at Philly's Vetri

Restaurant Editor Bill Addison is traveling the country to chronicle what's happening in America's dining scene and to formulate his list of the essential 38 restaurants in America. Follow his progress in this travelogue/review series, The Road to the 38, and check back at the end of the year to find out which restaurants made the cut.

A server at Vetri hands three of us tabloid-size sheets printed with lists of more than twenty dishes divided into fish, vegetable, meat, and dessert. "So this is an idea of what your meal will look like," she says. "You'll probably see most of these throughout the evening. Is there anything you're particularly interested in trying or avoiding?"

So begins one of the country's most playful and singular takes on the tasting menu format. Diners obtain a blueprint for their dinner, but exactly how it rolls out is left to the kitchen. And the cooks often send out different dishes for each guest per course, rather than having the whole table receive the same rigatoni with Bolognese or guinea hen with chanterelles.

It's an approach that chef-owner Marc Vetri has been gradually working toward since he started the restaurant in 1998. He lived in Italy for a year and a half, moving from ristorante to ristorante and mastering recipes, before returning to his hometown to launch his ode to alta cucina. Vetri's wizardry with pastas in particular rewired notions in spaghetti-and-meatballs Philadelphia. The success of his upscale flagship begat a lineage of businesses over the last seven years, including two locations of boisterous Osteria, a lauded pizzeria that opened last year, and a forthcoming addition called Lo Spiedo headlining grilled and rotisserie meats.

With so many accessible ways to feast on his culinary vision, Vetri wanted his firstborn to be an even purer, higher expression of fine dining. In 2011 he left behind a la carte service in favor of prix fixe, which had already been the only available option on Fridays and Saturdays. Dinner then was priced at $135 per person; it is currently $155, with wine pairings available for $90 or $135. 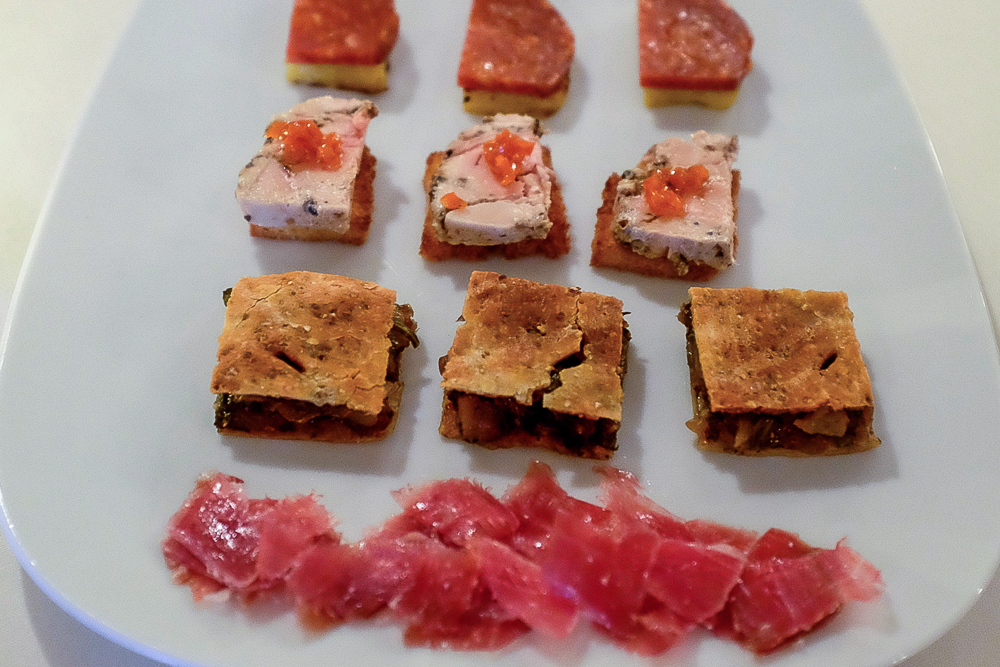 The tasting menu format does align with the environment. Set in a converted townhouse, the 30-seat restaurant's mustard walls, slatted wooden chairs, and mounted antique plates and copper pans resemble a Roman apartment where generations of a family live together. It lulls you into a state of mind that says "feed me" more than "let me direct this dinner." That headspace takes over even more when the ebullient staff brings out glasses of prosecco and a tray of celestial snacks to start: squares of witty foie gras pastrami; pork terrine on crostini, dabbed with preserved kumquats; a torta of garlicky vegetables squished between parmesan crackers; thick slices of chorizo; and shavings of nutty ham, aged three years, from Mangalitsa pigs.

Many of the dishes that follow have been perfected through the years as part of the Vetri repertoire. Quivering asparagus flan barely contains a quail egg aching to ooze. Onions, caramelized for half a day into a chocolaty jam, are encircled with a crepe, baked with parmesan, and lowered into a pool of white truffle fondue. Speckled brown butter coats chubby orbs of spinach gnocchi; it came paired with almond tortellini caught in a sweet-savory tug of war between crushed amaretti cookies and glossy white truffle sauce. We were each treated to plates of a Vetri masterpiece, smoked goat with crackling skin over a slick of soothing polenta. 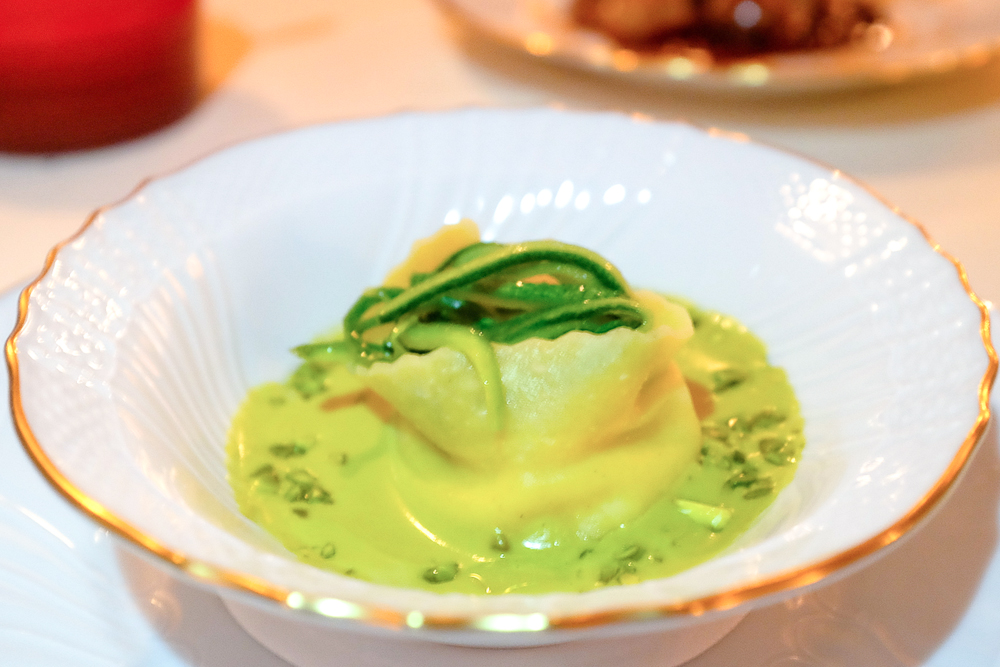 But executive chef Adam Leonti also has the chance to flex his intelligence and creativity with some newer novelties. The evening's most memorable dish was the salt-baked quail, inspired by the salt-baked branzino that Vetri helped popularize. For the quail version, Leonti blanches and purees spinach and mixes it with salt and egg white until it becomes dough-like. He wraps it around the bird, which is stuffed with spinach and farro. The result is intensely saline, which Leonti ameliorates by dousing the quail with a fragrant syrup from Alto Adige made from pine cone buds. It smells like a freshly cut lawn on a fall day.

Leonti is shrewd in his tinkerings with pasta. A riff on the American idea of soup/salad/pasta comes in one bowl: A silky agnolotto filled with julienned zucchini ribbons in a moss green moat fashioned solely from pistachios, onions, water, and olive oil. He draws in Spanish influences for smoked-paprika chitarra that ensnares charred octopus and Marcona almonds in its tangles. Desserts included a flamboyant blueberry baked Alaska and a pert little cake that seeped pistachio cream.

There were a few hiccups. A pea and ricotta tart had a dense, mealy texture. Saffron fusilli, though surrounded by a wondrous lobster emulsion tinged with absinthe, fell apart at first bite in a way that reminded me of gluten-free pasta. A server mentioned that the kitchen has been experimenting with a new batch of semolina that week, so I'll call it a fluke. And though I'm sure it has its longtime fans, perhaps it's time to put the "chocolate polenta souffle with a ganache center" (oh, you mean molten chocolate cake?) out to pasture.

The odd foible barely detracted from the extravagant talent on display. For an experience that encompasses both the elegance and familial joy of Italian cuisine, few restaurants in America are equal to Vetri.

1312 Spruce Street
215-732-3478
website
Open for dinner Monday - Saturday 6 - 9:30 p.m., Sunday 5 - 9:30 p.m.
How much does it cost?: Tasting menus—with house-made pastas as a centerpiece but including courses that feature vegetables, meat, and fish—cost $155 per person.
Standout Dishes: Caramelized onion crepe in truffle fondue, ragu Bolognese with rigatoni, crackly-skinned goat over creamy polenta, pistachio flan with milk chocolate gelato.
What to drink: Wine pairings come in two categories: a $90 option or a $135 grand tasting. Sommelier Bobby Domenick leans heavy on the Italian varietals, naturally, but draws from the breadth of the country's wines to match the scope of the cooking. And he happily obliges guests who would prefer glasses or bottles or a modified pairing.
How to get in: Typical of a special-occasion restaurant, the prime weekend slots are usually booked weeks in advance, but it's easier to slip in last minute earlier in the week. If you don't see an appealing time available on OpenTable, do call the restaurant; they hold back some spaces and may be able to accommodate you.

Our review of Vetri