How Philly's Vedge Is Taking Vegan Food to New Heights

Share All sharing options for: How Philly's Vedge Is Taking Vegan Food to New Heights

Throughout the year, Restaurant Editor Bill Addison is traveling the country to chronicle what's happening in America's dining scene and to formulate his list of the essential 38 restaurants in America. Follow his progress in this travelogue/review series, The Road to the 38, and check back at the end of the year to find out which restaurants made the cut.

It's amazing—unsettling, even—that only a handful of places like Vedge exist across America. What's so radical about an upmarket restaurant focused on exceptional vegetable dishes? Today's kitchens may be treating vegetables with more respect, but elegantly prepared roots, brassicas, and nightshades haven't exactly supplanted America's lust for meat. No matter how much we coo over charred broccoli and shishito peppers, most food obsessives still view them as opening acts or side dishes.

We'd likely have more of an appetite for vegetarian restaurants if chefs as skilled and driven as Rich Landau ran them. Landau's evolution is fascinating, and a model for budding vegetarian cooks. He began his cooking career by opening a natural foods and juice bar pit stop called Horizons Cafe two decades ago in Willow Grove, a community in Philadelphia's northern suburbs. There he met Kate Jacoby, who would become his wife. They grew the business together, following a typical course for vegetarian/vegan restaurants. Landau strived to master the "I can't believe it's not X" genre of dishes: "scallops" made of tofu, "wings" fashioned from seitan and slathered in barbecue sauce. He served meatless versions of familiar dishes pulled from cuisines around the globe, and Jacoby tinkered with desserts that eschewed dairy or eggs. They tackled this approach with more success than most, but it wasn't cooking destined to reach a broad audience. 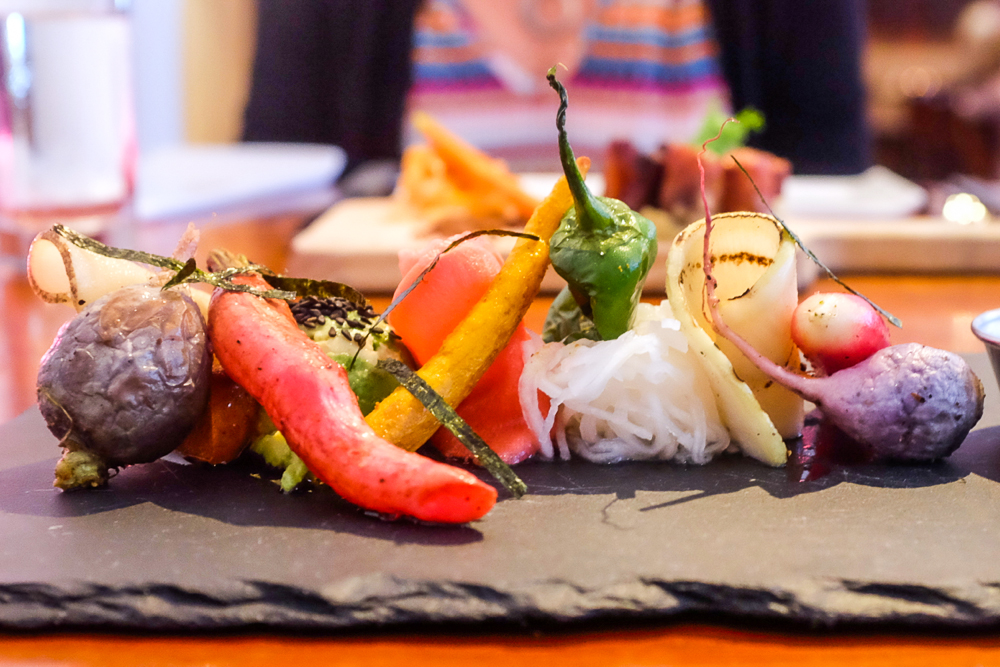 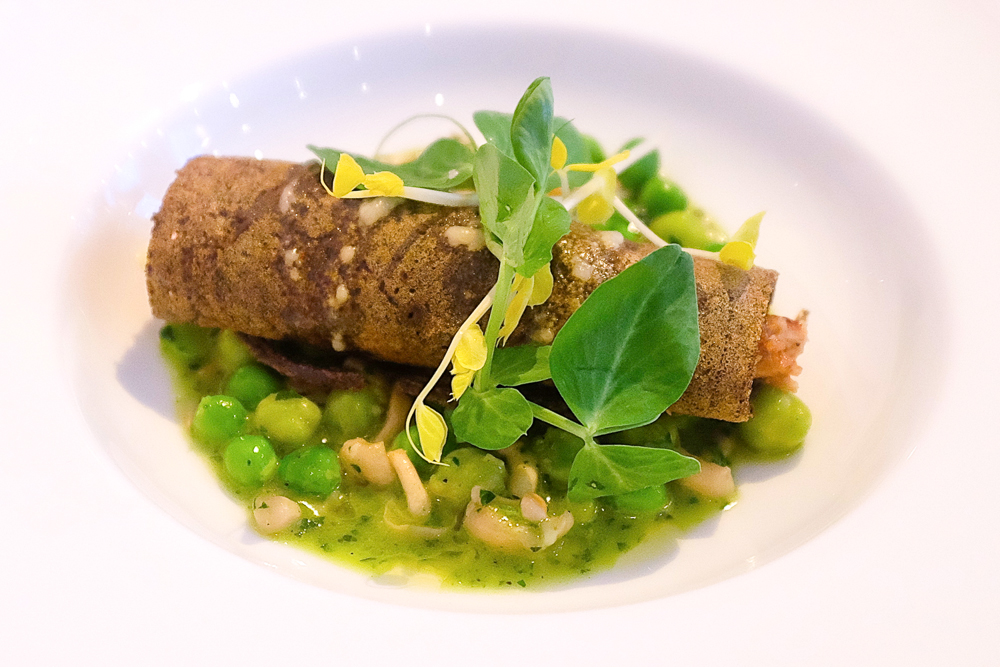 In 2006, Landau and Jacoby dropped the "cafe" from the Horizons name and moved the restaurant to a two-story space in Philadelphia's Bella Vista neighborhood. Landau still specialized in tofu, tempeh, and seitan, but he'd stopped labeling them as the meats and seafood he was initially trying to imitate. Purer vegetable expressions also began appearing on the menu—things like cucumber soup silky with avocado and bright with lime and cumin. Over the restaurant's five years, produce moved more and more to the forefront, in step with overall dining trends and the resurgence of local farmers markets. In 2011, the couple closed Horizons and took over a historic brownstone in Center City.

Vedge reached the zeitgeist—local and national raves, reservations smugly offered at 5:15 or 9:45—not simply because the cooking is among the most accomplished in the city. The format couldn't be more of the moment: a swank multi-roomed restaurant with designer lighting, knotty hardwood floors, and a menu of gorgeous small plates. There's nothing overtly dogmatic. The place happens to serve vegan food.

Any doubt about its ability to satiate appetite and palate is erased with a few bites of a signature dish: yellow beets roasted on a bed of salt and then sliced and minced as the base of a cylindrical terrine layered with avocado, smoked tofu, capers, red onion, and cucumbers creamy from vegan mayonnaise. The only thing missing from its piquant crisscross of flavors and textures is crunch—which comes from a couple slices of rye toast tilted jauntily on top the terrine. 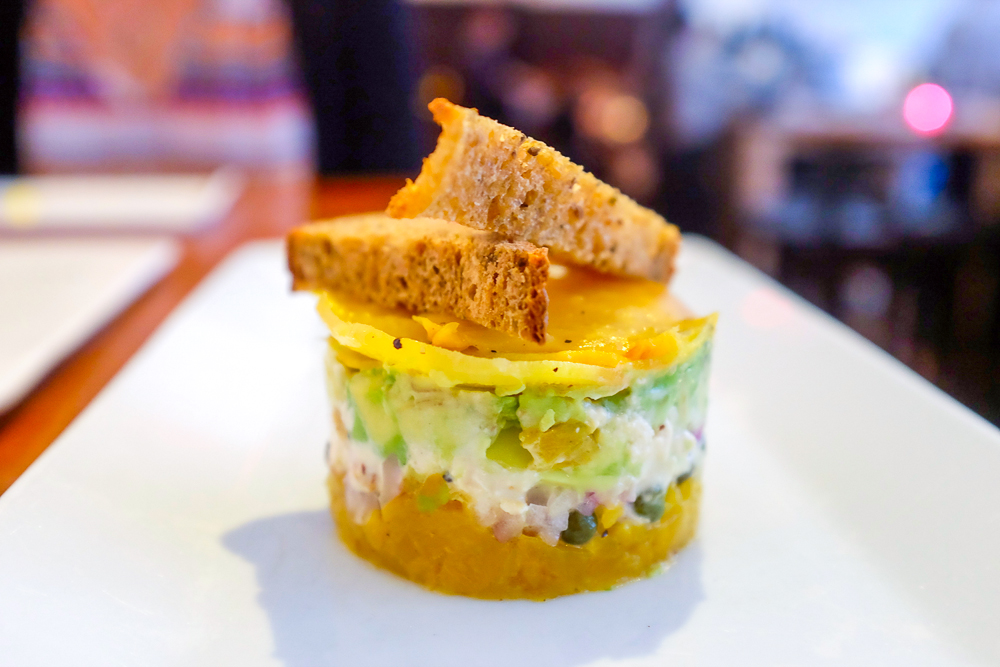 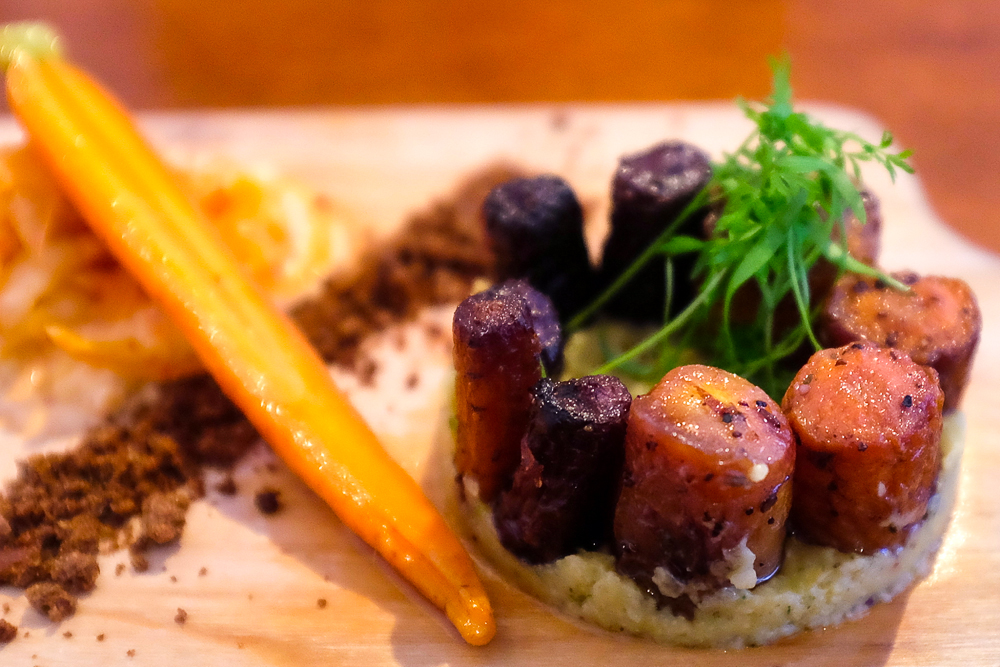 Landau still borrows from meatier lexicons for inspiration, but it is less obvious these days. The beets, for example, take cues from lox and its traditional accouterments. A montage highlighting smoked carrots draws from the reuben, another deli classic. The carrots stand in for brisket, a tangle of cabbage bridges the gap between sauerkraut and kimchee, and a strip of pumpernickel breadcrumbs underscores the Eastern European influences. Grilled seitan doubles for Middle Eastern shawarma in a dish seasoned with whipped tahini and za'atar.

Many dishes have no need to reference other cuisines; they are delicious unto themselves. The elongated forms and kinetic colors of another Landau signature, "Fancy Radishes," brought to mind Ernie Barnes' euphoric painting "Sugar Shack." A cauliflower-stuffed buckwheat crepe sat on a bed of English peas as a final farewell to Pennsylvania's spring, while slices of red and yellow tomatoes warmed by the presence of grilled and whipped corn ushered in summer. Grilled zucchini hollowed out, stuffed with chopped hearts of palm, and glossed with herbaceous green harissa was substantial in a way that any omnivore could appreciate. Just consult with your server to avoid ordering one too many dishes that rely on the eggless mayo for creamy tang. Its mouth-coating slickness can get monotonous.

Hats off to Jacoby's sweets: I worked as a vegan pastry chef for six months in my twenties, and there were days when I could hardly face another tub of Tofutti cream cheese. It must have taken her years to perfect the blends of tofu, coconut milk, and soy milk for desserts like her rich-tasting cheesecake (topped with blueberries and lemon gel) and poppy seed ice cream. Her creations provide the ambrosial finale so necessary for a meal of this caliber. The fact that dinner excluded any ingredients from the animal kingdom seemed superfluous by its conclusion. Which is exactly the point.