Share All sharing options for: A Thrilling Iranian Breakfast at Toronto's Takht-e Tavoos

The broth looked muddy, like a river after a rainstorm. Cinnamon's barky-sweet scent whirled with gamey aromas. On the side there were lemon slices and logs of crusty flatbread sprinkled with sesame seeds. But it wasn't until we dipped spoons into the soup that the mystery meats bobbing just below the surface revealed their identities: the lobe, soft from hours of simmering, was certainly a tongue, and, yes, that pointy bit was indeed a hoof.

Kaleh pacheh, a potage of sheep's head and foot that is served for breakfast in Iran, can be unnerving—but I was thrilled. The menus at Persian restaurants in North America veer toward monotony: the same mix of kabobs, yogurt dips, and stews at place after place. Takht-e Tavoos, on a stretch Toronto's multicultural College Street not far from the city's Little Italy, is the brave groundbreaker that looks further afield. Owners Alireza Fakhrashrafi and Danielle Schrage own two other Persian restaurants on College Street: Their first, Pomegranate, trades in greatest-hits dishes like mast-o-musir (yogurt with dried shallots) and fesenjan (the stew seasoned with pomegranate syrup and ground walnuts, often served with chicken). Kabobs headline at Pomegranate's little sister, Sheherzade. 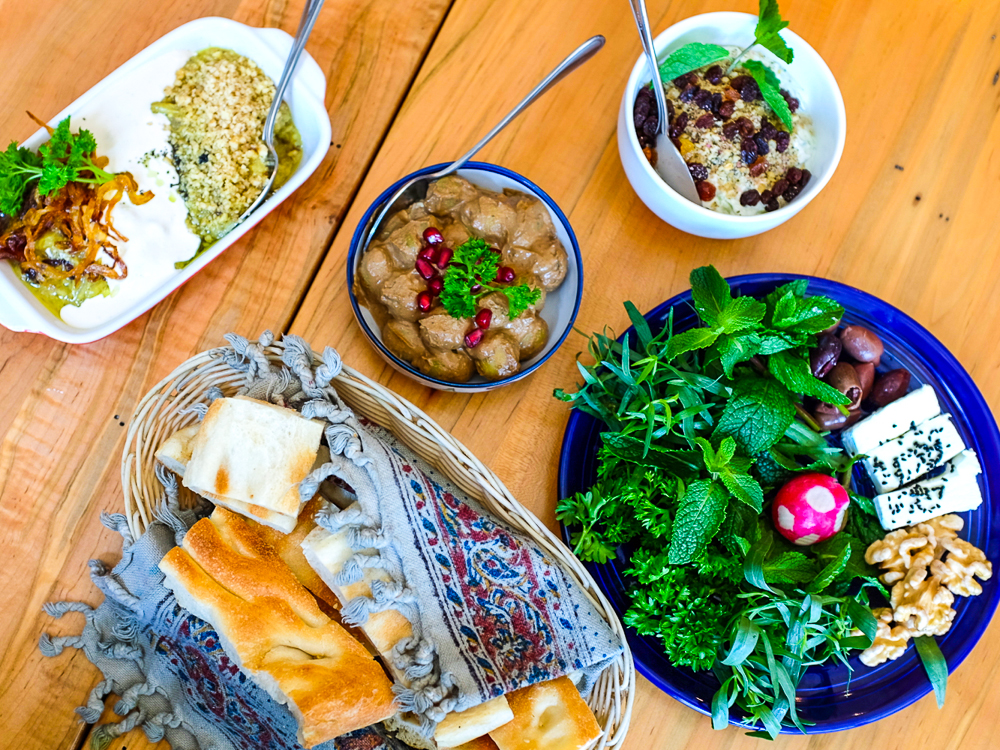 Fakhrashrafi and Schrage let their youngest be the wild child. Tavoos, as locals refer to it, only serves breakfast and lunch Wednesday through Saturday, with a menu of exhilarating departures. If sheep's tongue, however delicious, doesn't appeal as a morning meal, there are plenty of tamer dishes. Eggs sunny-side up serve as the foundation for some beguiling combinations, including sauteed dates and walnuts with a sauce of tahini combined with grape syrup, and another of smoked salmon and cubes of halloumi cheese with tomatoes, olives, and potatoes.

I came closer to the lunch hour and ordered accordingly. The meal began, as is traditional in Persian restaurants, with a platter containing sprays of mint and tarragon, radishes, soaked walnuts (to cut the tannins and revive their crispness), olives, and rectangles of sharp feta sprinkled with nigella seeds. These made eloquent accompaniments to the ridged flatbread just yanked from the oven—as did a homey version of kashk-e bademjan, eggplant puree with caramelized onions and Persian whey, which is akin to a thin sour cream. Zeyoon parvardeh—green olives blanketed with a sauce of ground walnuts and pomegranate molasses, garlic, and mint—pulled focus with its paroxysms of flavor. 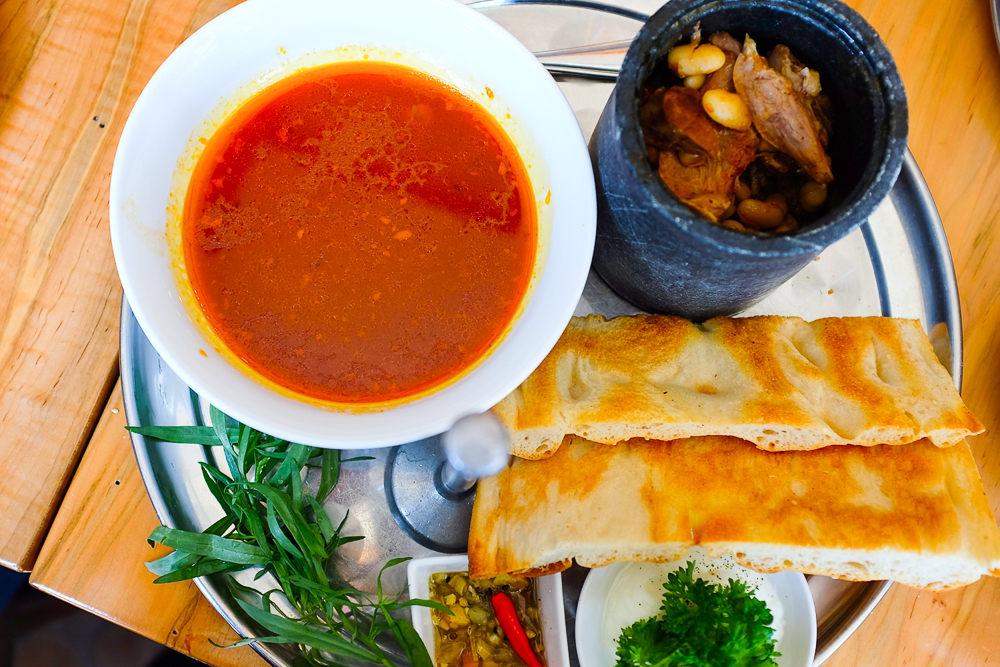 Dizi sangi shared entree status with the head-to-toe sheep soup. "Dizi" refers to a conical stone vessel typical in Iranian cooking: It arrived filled with a fragrant, long-simmered stew of lamb shank, boneless rib meat, white beans, potato, and tomato. The red-orange broth was drained off, brightened with lime, and served in a separate bowl for slurping and dunking. A metal masher came on the side; the idea is to pound the stew meat into a rough puree with a texture akin to pulled pork, and then scoop it all out and spread it on hunks of flatbread with torshi (a garlicky pickle), yogurt, and scallion greens. In this type of dish it's especially evident how deep the connection runs between Persian cuisine, one of the world's oldest, and northern Indian cooking: They share the sweet, sultry spicing and the lush contrasts of sharp and creamy condiments.

The small space at first appears simple but becomes more bewitching the longer you gaze. The restaurant's name translates as "peacock throne," in tribute to a famous room in Tehran's Gulistan Palace. A gold border, hand-painted on cedar, runs along the wall, which is also decorated with clay pots, bright vases, lanterns, and framed examples of Iranian calligraphy. Local critics uniformly lauded Tavoos (which opened last year) and steady, diverse crowds have followed—an inspiration, hopefully, for other Persian restaurateurs and cooks who must surely grow bored with their homogenous menus.

1120 College Street, Toronto
647-352-7322
Open for breakfast and lunch Wednesday-Sunday 10 a.m.-4 p.m.
How much does it cost?: Mazeh (small plates) $3.95-$7.95, breakfast egg dishes $9.50-$12.50, traditional dishes $9.95-$13.95.
What to order: kashk-e bademjan (eggplant puree with caramelized onions and Persian whey), zeyoon parvardeh (green olives with walnut and pomegranate molasses sauce), a dip like mast-o-sabzi (yogurt with herbs, walnuts, and raisins), dizi sangi (lamb stew with a slew of condiments), and, for the adventurous, kaleh pacheh, a warming soup of sheep's head and hooves.
What to drink: The restaurant doesn't serve alcohol. There is coffee and spiced tea, or try the bottled yogurt beverage called doogh.

Our review of Tavoos Restaurant