The $100 Chicken at Canada's Edulis is Worth Every Cent

Share All sharing options for: The $100 Chicken at Canada's Edulis is Worth Every Cent

Edulis' truffled coquelet deserves a place alongside Zuni Cafe's roasted chicken as the most succulent bird served in North America. While the Judy Rodgers icon touts dry-brined simplicity and crisp skin, Michael Caballo, who operates Edulis with his wife Tobey Nemeth, uses young chicken raised on a farm in Quebec as a palette upon which to layer flavor after flavor. He makes a compound butter with black truffles and Madeira, pipes it under the skin, and then tucks in a few more truffle slices. The bird is washed with extra Madeira before roasting, covered, in a snug pot over alfalfa hay for 45 minutes.

It arrives at the table in its rich juices, covered with generous discs of shaved, striated truffles. As decadent as the ingredients sound, the final effect is a marvel of subtleties—like taking a deep breath in the countryside, with wafts of earth and herb that drift by rather than assailing. The buttery meat more than compensates for the lack of crisp skin, and the yielding textures are cleverly mirrored by an accompanying salad of Bibb lettuces glossed in schmaltz vinaigrette. 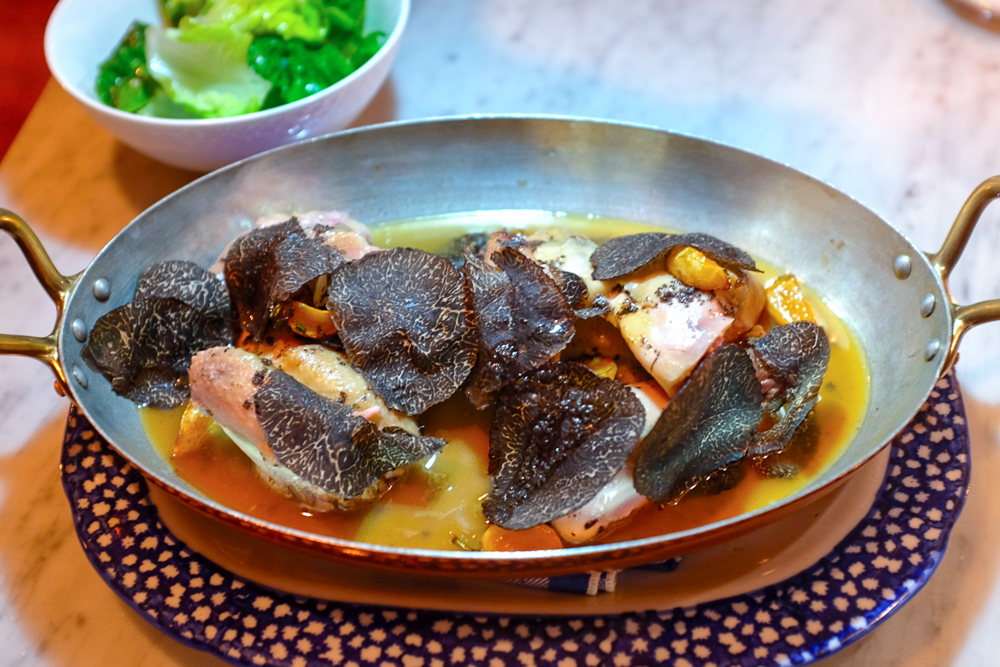 The chicken cost $100; I didn't feel one speck of buyer's remorse when the bill arrived. It was the supplemental centerpiece to an already remarkable eight-course meal. Edulis ("edible" in Latin) has the air of a dinner party. In 2012 the couple took over a converted two-story house, surrounded by condo buildings, just off busy King Street. The tiny dining room—separated by a service station adorned with vases of sunflowers, an antique cake dome, and other quirky knickknacks—has just enough tables to feel congenial rather than cramped. Food arrives on the kind of delicate, appropriate plates (including a wild strawberry Wedgewood pattern for dessert) that one usually encounters in the home of eccentric collectors. Caballo mans the kitchen; Nemeth oversees service and occasionally jumps on the line as well.

They both left jobs in Toronto to travel and work abroad in Spain and Italy (among other places) for several years before returning home. The food has the savor of someone who absorbed Europe's modern culinary culture at a leisured pace rather than in a fevered expedition. The ever-changing dishes Caballo sends out in five- or seven-course menus aren't exactly homey, but they taste the way I'd imagined Caballo would cook if he were trying to impress guests at his own dining table. Customers can call ahead to request extra dishes like the truffled chicken or paella or canard a la press (the baroque recipe for duck in blood sauce developed at La Tour d'Argent), classic preparations that Caballo and Nemeth prepare simply because they enjoy them. 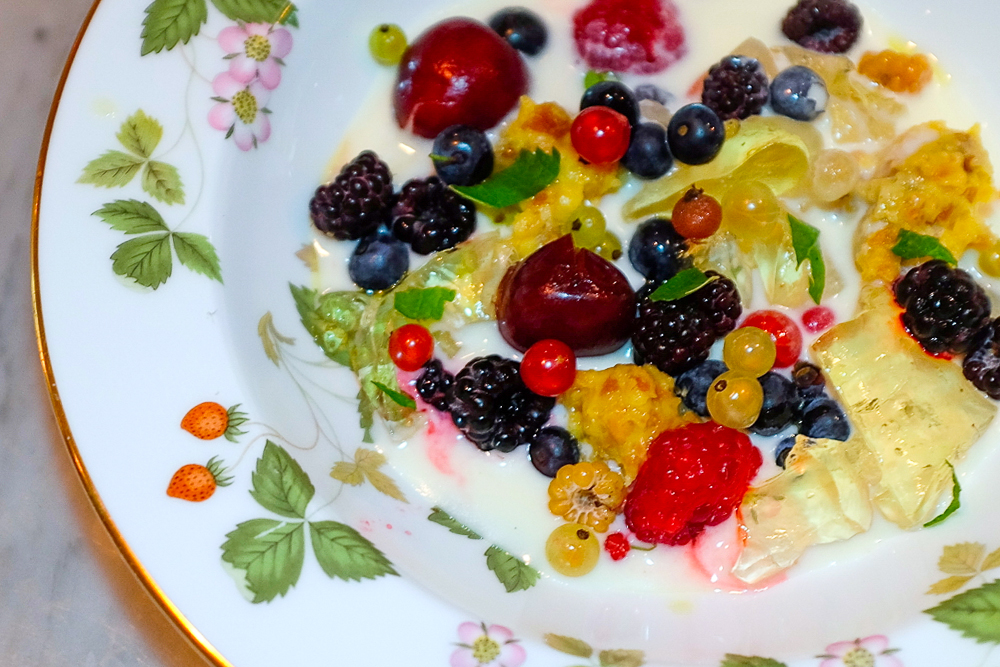 Though luxuries from up and down the food chain appear throughout dinner, Caballo favors seafood and vegetables. Fluke, cured in sake and seaweed, arrived as the first course in a shimmery glass bowl, bathed in a cooling cucumber seed dashi and overlaid with stalks of sea asparagus as thin as rose stems. Nova Scotia lobster with Australian black winter truffles (a hint of what would come with the chicken) came suspended in an astringent, palate-perking gelee of young, foraged grapes. The flavors warmed with the next two dishes: house-smoked eel with chanterelles and cauliflower in matelote sauce (which includes red wine, fish stock, and crème fraiche) and octopus grilled over charcoal over a rich corn emulsion with radishes and basil sprouts. Smoked duck breast with hunks of feisty duck sausage and morsels stuffed silky foie gras primed the taste buds for the forthcoming chicken. Afterwards the wild strawberry-patterned plates came out flaunting blueberries, blackberries, cherries, and fresh currants in cream with dabs of elderberry jelly. A dreamy summer conclusion.

The cocoon created by the doting staff and the candle-lit room took the evening to another level. Nemeth and other servers beamed every time they appeared, describing the apple nose of a Taiheizan sake or gushing over the Basque teardrop peas a local farmer grows just for the restaurant. It was as much a conversation as it was feast, without being obtrusive or overly earnest. The tables were close enough to allow for good-natured eavesdropping: Across from us sat a restaurant-industry couple celebrating their third anniversary; next to us were two longtime friends catching up. We left the restaurant exchanging friendly, wistful glances. It's always bittersweet when an exceptional dinner party comes to a close.

169 Niagara Street, Toronto
416-703-4222
website
Open for dinner Wednesday-Sunday 6-10:30 p.m., Sunday lunch noon-1:30 p.m.
How much does it cost?: Five courses for $50 or seven courses for $70 at dinner (with a $40 set menu for Sunday lunch), but with tempting pre-order splurges available like a young chicken baked with truffles and Madeira ($100) or canard à la presse ($150).
What to expect: One of the warmest fine dining experiences in North America. Husband and wife team Michael Caballo and Tobey Nemeth—he cooks, she runs front-of-the-house but is also an accomplished chef—cocoon their guests in a 33-seat converted house, serving nightly-changing dishes heavy on modern French and Spanish influences.
What to drink: Beer and wine only, with little chance to miss the harder stuff given the selections' breadth and care. Beyond Old World and Canadian bottles, look for aperitifs made with vermouth and Campari, sherries by the glass, and homemade sodas.
How to get in: The restaurant's smallness and popularity make weekend dinner reservations difficult to come by; plan a month to six weeks in advance for Friday or Saturday nights.

Our review of Edulis