Four Perfect Meals (and One Dud) in Detroit

Share All sharing options for: Four Perfect Meals (and One Dud) in Detroit

Gallic settlers first arrived in the area between Lake St. Clair and Lake Erie that became known as Detroit (le détroit is "the straight" in French) in the early 1700s. Hearty Germans arrived at the small colony in the 1820s. But at the dawn of the twentieth century, when Detroit became an industrial capital brimming with factories and Henry Ford opened his automobile company, immigrants began arriving from all over the world seeking work. Their deep-rooted communities still support the restaurants that make up the fabric of Detroit's enduring dining scene. Among several paragons, there was only one highly trafficked but noteworthy disappointment. 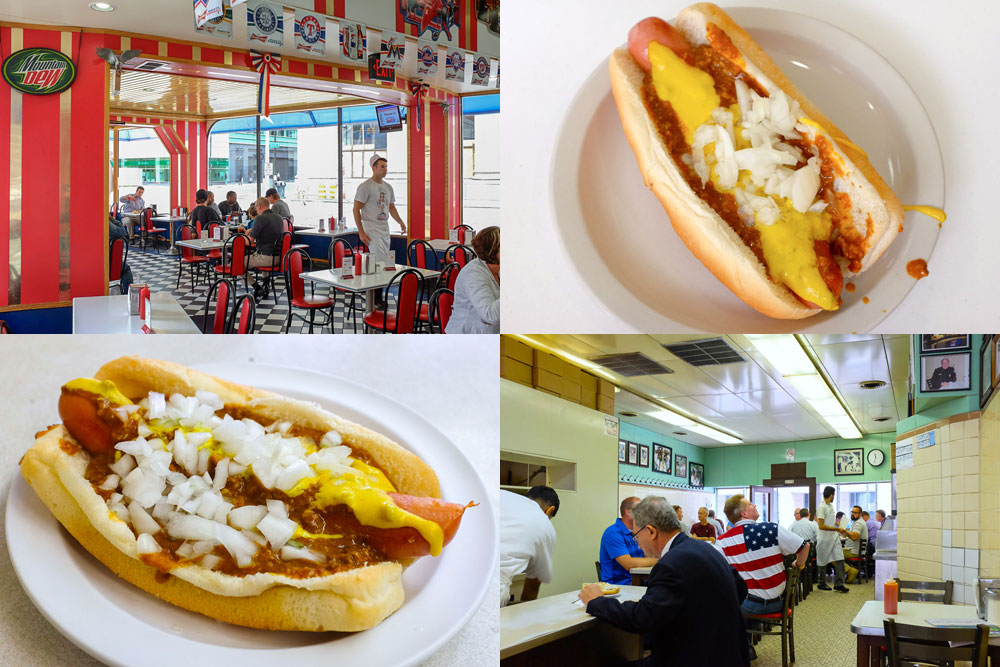 Any odyssey into Detroit's food culture begins with a coney—a chili dog cradled in a steamed bun with chopped onion and a couple slashings of yellow mustard. Origins of the "coney" moniker are hazy, though likely it came to Michigan in the early 1900s from Greek immigrants who passed through Ellis Island and heard of, or perhaps sampled, a Coney Island hot dog. Less murky is the man who popularized the dish: Constantine "Gust" Keros, who came to America in 1903 and, after peddling hot dogs from a cart, opened American Coney Island in 1917. Eventually Gust's brother, William, joined the business and then opened Lafayette Coney Island right next door.

Lafayette is no longer family-owned, though the grandchildren of Gust Keros still run American, which is clearly the more ambitious business between the two. American is as shiny as a new baseball stadium, with checkered floors and bright red and gold stripes running down the toothpaste-white walls. It runs a successful outpost in Las Vegas. Lafayette, in stark contrast, looks like a 1950s lunch counter, with avocado-colored paneling and beige tile. Service can be gruff. Both places inspire fierce loyalties.

Which is better? It's easy to decide for yourself: Coneys at both Lafayette and American cost $2.35 and, unless it's the prime lunch hour, you can be done eating in less than half an hour. (Bring a pack of Tums for dessert.) I found them similar but slightly preferred the one at Lafayette: The toppings showed a more generous hand, and the balance between sweet and sharp flavors was slightly more attuned. American's hot dog flaunted more snap, however. A preference between the two, then, can easily come down to environment: American's incessant cheer or Lafayette's Edward Hopper moodiness? Lafayette Coney Island: 118 West Lafayette Boulevard, Detroit, 313-964-8198. American Coney Island: 114 West Lafayette Boulevard, Detroit, 586-219-0995, website. 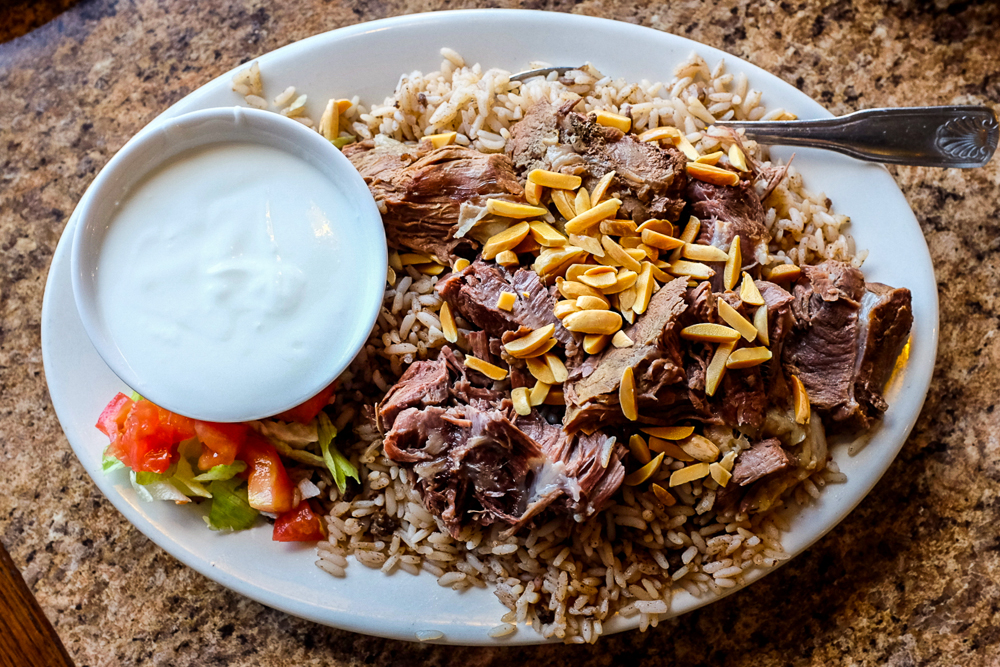 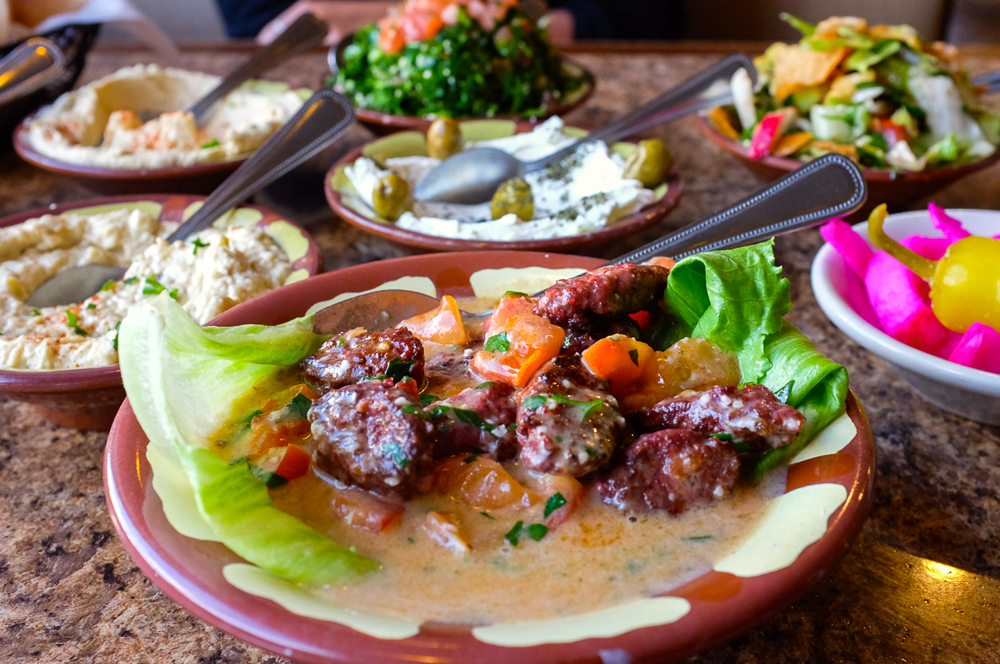 Dearborn, about 10 miles west of downtown Detroit, is home to one of the largest Arab-American populations in the U.S. Among its many Middle Eastern restaurants, Al-Ameer stands out as the don't-miss crown jewel: spacious, welcoming, and with a sprawling menu that urges feasting. The Lebanese family that runs Al-Ameer also operates a butcher shop next door, so this is a place to indulge in meat dishes like sujuk sausage, lively with paprika and cumin, or raw kibbeh, minced beef massaged with bulgur wheat, pureed onion, and subtle spices. Squeamish souls can opt for fried kibbeh, ground lamb croquettes studded with pine nuts that are falafel's meaty counterpart.

Both falafel and fried kibbeh arrive as part of the Al-Ameer maza, a spread of small plates that comes either as a serving for two for $26.95 or four for $49.99. (The smaller option would be plenty for several people ordering multiple dishes.) Servers brought the dishes in waves: hummus and baba ghanoush, labneh (drained yogurt) sprinkled with dill and dotted with olives, puckery stuffed grape leaves, palate-cleansing tabbouleh heavy on the parsley, and jawaneh, the garlicky, lemony Lebanese version of chicken wings.

Our table was already chockablock when the server delivered a platter of stuffed lamb. The name turned out to be a misnomer. The lamb was roasted on its own, hacked into lush shreds, and then piled onto a plate with traditional ingredients for stuffing: rice seasoned with lemony sumac and handfuls of slivered almonds. It was a deconstruction of sorts that nonetheless came together beautifully. 12710 West Warren Avenue, Dearborn, 313-582-8185, website. 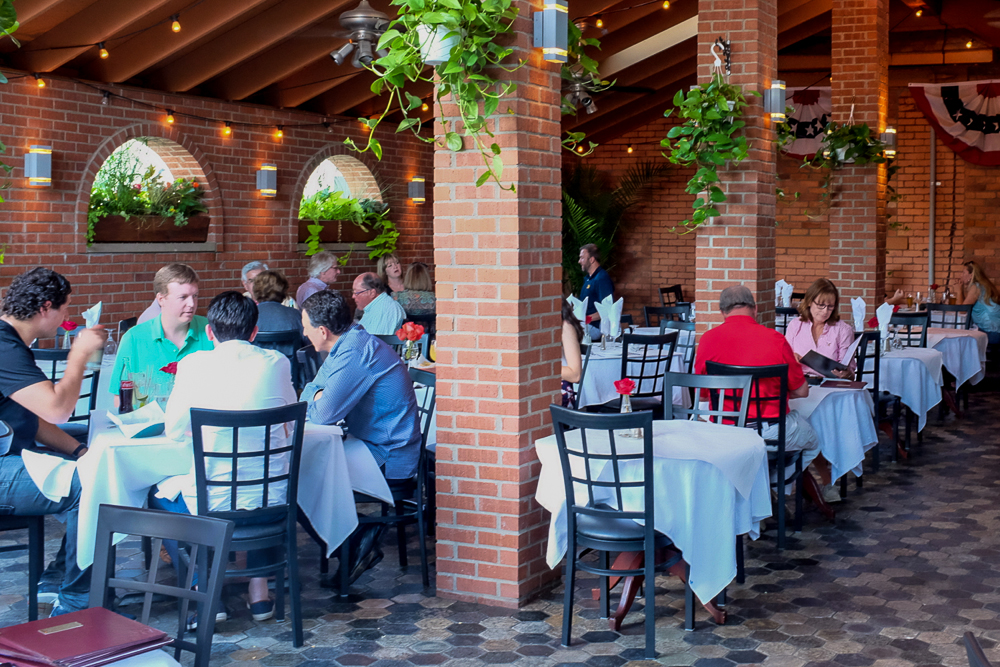 Just off Michigan Avenue, the broad artery through Southwest Detroit, sits this local haunt that serves Italian and Mexican food. Yes, both cuisines, though they aren't entwined: Don't expect saltimbocca napped in tomatillo salsa or enchiladas layered with Bolognese and mozzarella. Owner Norberto Garita, a native of Puebla, Mexico, cooked at a now-defunct Italian restaurant for nearly a decade before opening El Barzon in 2006. He planned to cook his native foods but also didn't want to let his acquired expertise languish, either. The menu, then, lists Italian and Mexican dishes separately, never dipping into fusion experiments.

But the kitchen's duality does make for a charmingly brain-jangling meal. It's like ordering dinner from two favorite neighborhood restaurants simultaneously. Neither halves of the menu delve into regional obscurities: Most dishes are so familiar they're essentially American. We strived to be equal opportunity in our ordering: arugula salad with Parmesan and chile relleno, veal piccata and chicken enchiladas, a trio of pastas and two versions of tamales. And to drink? First a margarita, then a glass of Chianti.

One cuisine didn't outshine the other, either. The piccata seduced with its kiss of capers and white wine. Enchiladas didn't rely on a mantle of cheese; its sauce of jalapeño, tomatillo, and roasted poblano pepper bore a feisty bite. The pasta trio (cheese ravioli bathed in tomato, cavatelli smothered in mushrooms and cream, strozzapretti with sausage) and a chile relleno in salsa rojo each dispatched their own versions of red-sauce comfort. You can guess the choices for dessert: tres leches or tiramisu? (Go for the latter.)

In winter customers huddle together in the dining room painted sage and with sombreros on the wall. In summer, though, regulars pack the roomy, brick walled patio. Our server seemed hurried and disengaged; we didn't know about night's specials until we eavesdropped on another staffer reciting a list. The upbeat crowd, the balmy weather, and the earnest cooking offset the absentmindedness. 3710 Junction Road, Detroit, 313-894-2070, website. 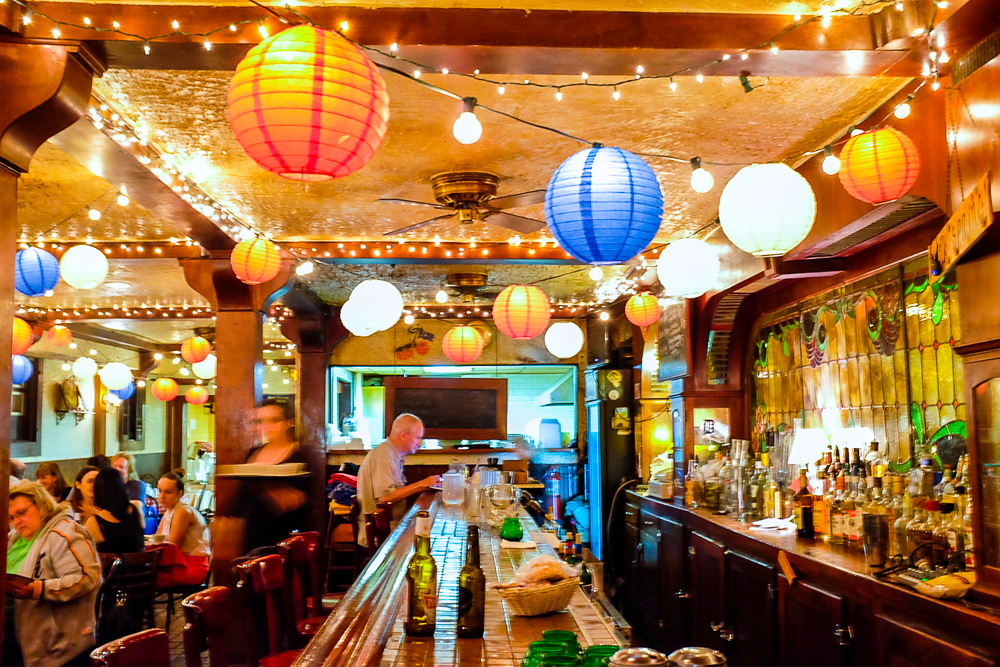 Hello, 1976. The ornate bar fitted with psychedelic stained glass; the low, stucco ceilings in the subterranean space; the rec-room wood paneling: Polish Village Cafe is a trip literally and figuratively. It resides in a residential neighborhood six miles from downtown Detroit in Hamtramck, a city that was 90 percent Polish when the building, once a gentlemen's hotel, took its current form almost forty years ago.

The demographics have shifted, but Hamtramck remains a bastion of Polish culture; this restaurant has achieved landmark status. Visitors intersperse with local characters sporting suspenders and porkpie hats. A distinct tang of cabbage drifts in the air. Order accordingly and ask for the Polish Plate, a sampler (modest in size and in its $8.95 price) that includes a scoop of sauerkraut, one piece of stuffed cabbage fat with ground pork and cloaked in smooth tomato sauce, a three-inch hunk of kielbasa sausage, a mound of mashed potatoes in murky brown gravy, and a choice of pierogi: Gravitate to savory flavors like potato and cheese, rather than the sticky-sweet blueberry or strawberry fillings. A plate of meatballs came with kasha varnishkes, which sounds much more exotic and appealing than its English translation, buckwheat groats. 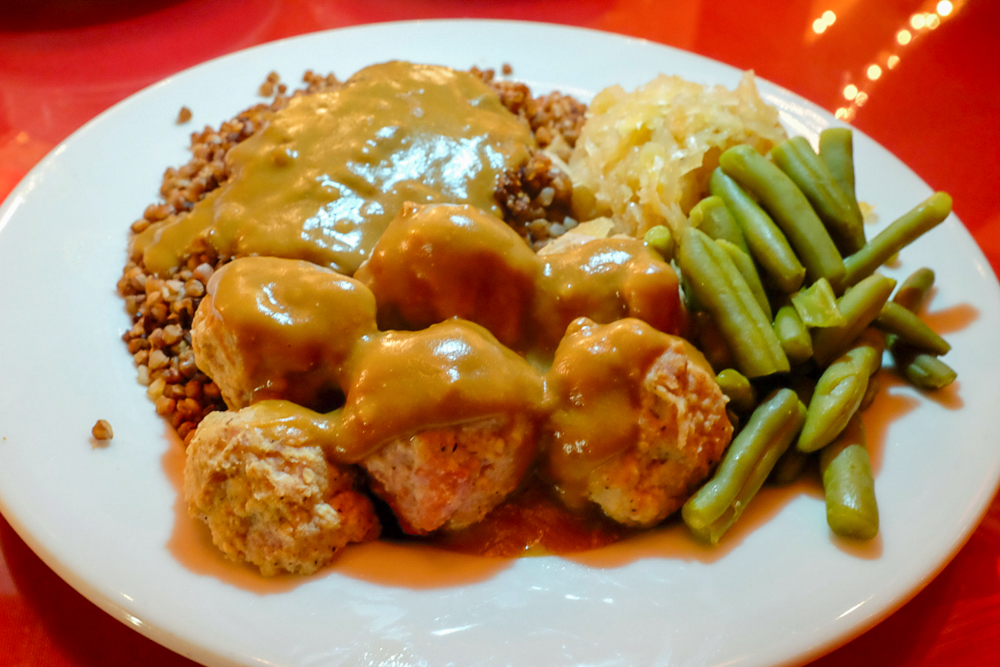 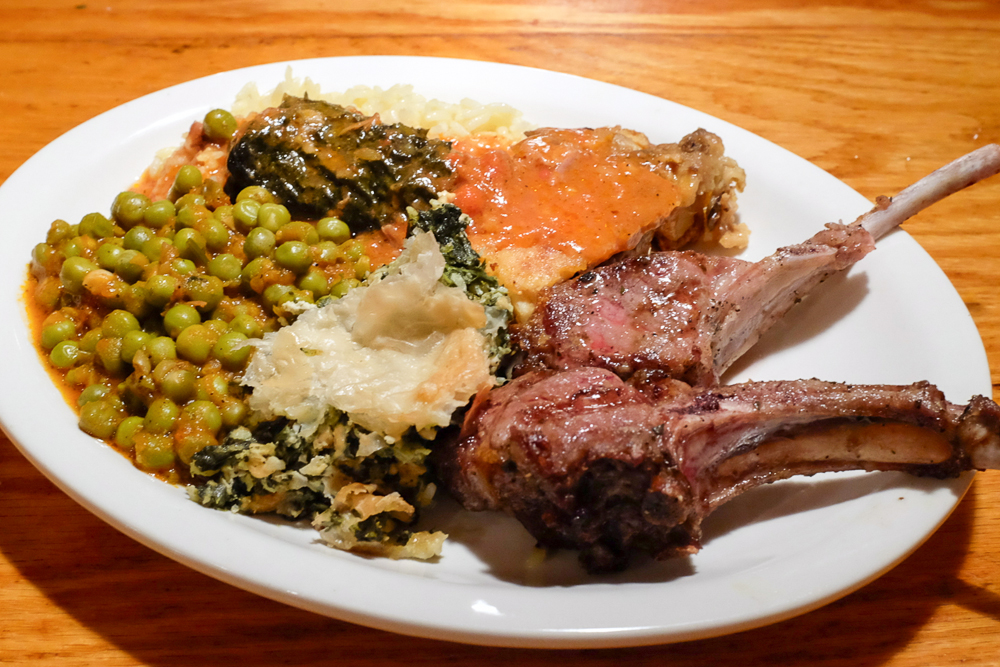 "Opa," droned a server at a nearby table, as he lit a block of Kasseri cheese with brandy and the flames surged. Nearly every table orders this dish, and the exclamation point behind the word had long drained from his voice. It was the same all through the cavernous room—staffers setting cheese ablaze and echoing a joyless "opa."

The food mirrored their fatigue. Pegasus is situated in the center of Greektown, an area of downtown Detroit that thrives as a tourist destination, primarily due to the Greektown Casino-Hotel close by. The restaurant does steady business, and its menu offers over ninety dishes. Sadly, the kitchen goes too far in its appeal to broad tastes. Taramosalata, the traditional cured roe dip, was so bland I could hardly detect any fishy nip. Moussaka and spanakopita had lifeless textures suggesting they'd languished on a steam table. A couple meaty lamb chops were decent but not enough to salvage the meal. We hardly ate any of our dinner. Our server took away the plates without a word and thanked us in a zombie monotone. Opa, indeed. 558 Monroe Street, 313-964-6800, website.