Share All sharing options for: Bill Addison's 21 Meaty Highlights From the Road

I've strived as a food writer to avoid asides about clogged arteries and appointments with the cardiologist. But scrolling down this list—a mere highlight reel—of the mightier meat dishes I've consumed the last three months while crisscrossing the country may indeed inspire me to seek a prescription for Lipitor. True, vegetables are gaining status on restaurant menus. In America, though, meat is forever. The 21 dishes below, roughly presented in the order I've eaten them, span both coasts (and stops in between) and run the gamut of high-on-the-food-chain proteins. 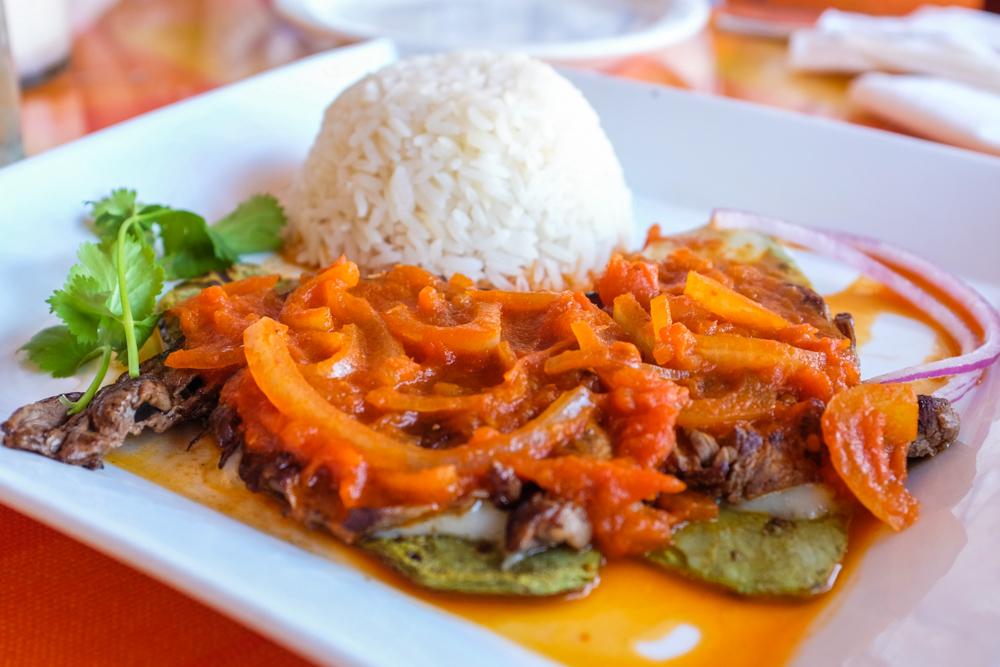 Chef-owners Jaime Martin del Campo and Ramiro Arvizu blanket pork and chicken with wondrous moles and perfume ground beef with spices, fruits, and nuts before stuffing it into their famous chiles en nogada. But for a specialty in which the meat isn't quite so cloaked, conquer the "Conquista" plate: pounded steak over grilled cactus with a veneer of smooth Oaxaca cheese and an oniony chile guajillo sauce. It's but one reason why this Mexican standard-bearer merits the 20-minute (non-rush hour) drive from Downtown LA. [Read the full review] 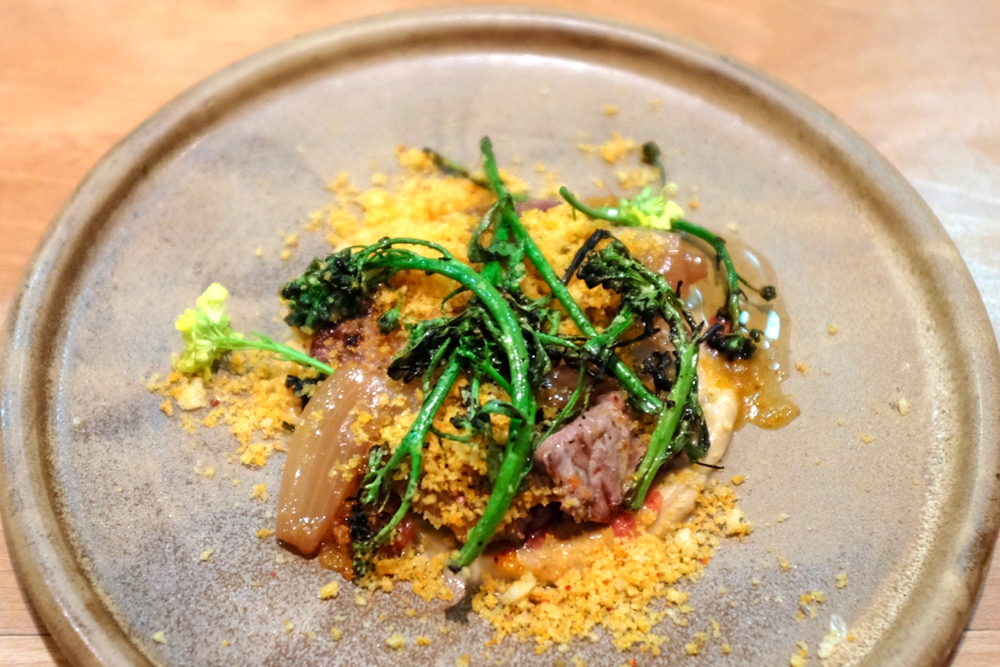 The meatiest dish of an operatic meal at Ludo Lefebvre's tiny theatre-restaurant. Strips of tenderloin hide amid the clamor of smoked peanut butter, charred broccoli, and shallot bits. [Read the full review] 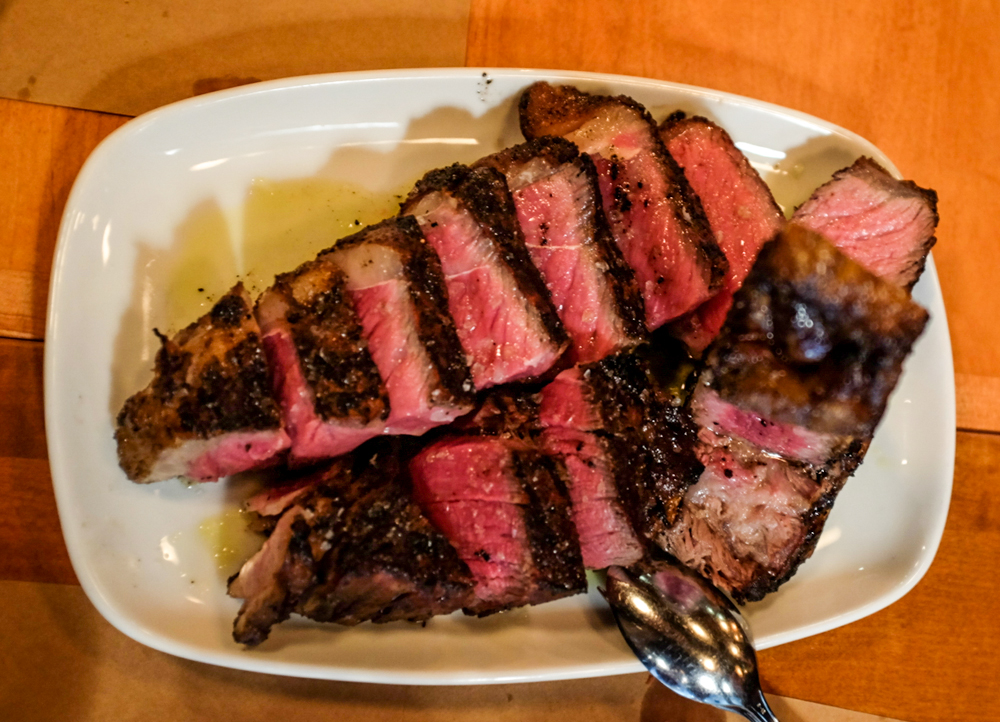 Over a wood-burning grill, chef Chad Colby cooks a foreboding 42-ounce T-bone and saws it into slices that look like the carnivorous equivalent of toast. No artisan jam for these babies, though: You need only the olive oil and sanguine drippings collecting under them. Before the steak at this sister restaurant to Mozza, don't miss Nancy Silverton's bready ode to perfectionism, focaccia di Recco. [Read the full review] 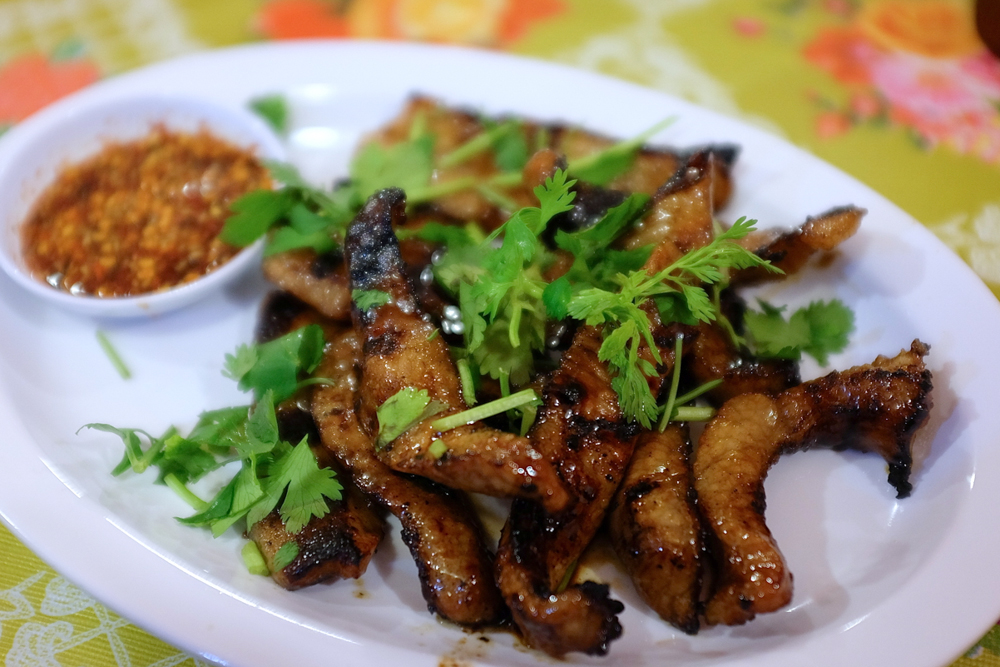 You know hamachi kama, the yellowtail collar filled with lush flesh that's popular at Japanese restaurants? This is the porcine version—curls of fatty neck meat made livelier by a no-joke char and a galangal-spiked chile dip. It's a signature at both Kris Yenbamroong's first restaurant and his Silver Lake offshoot.
[Read the full review] 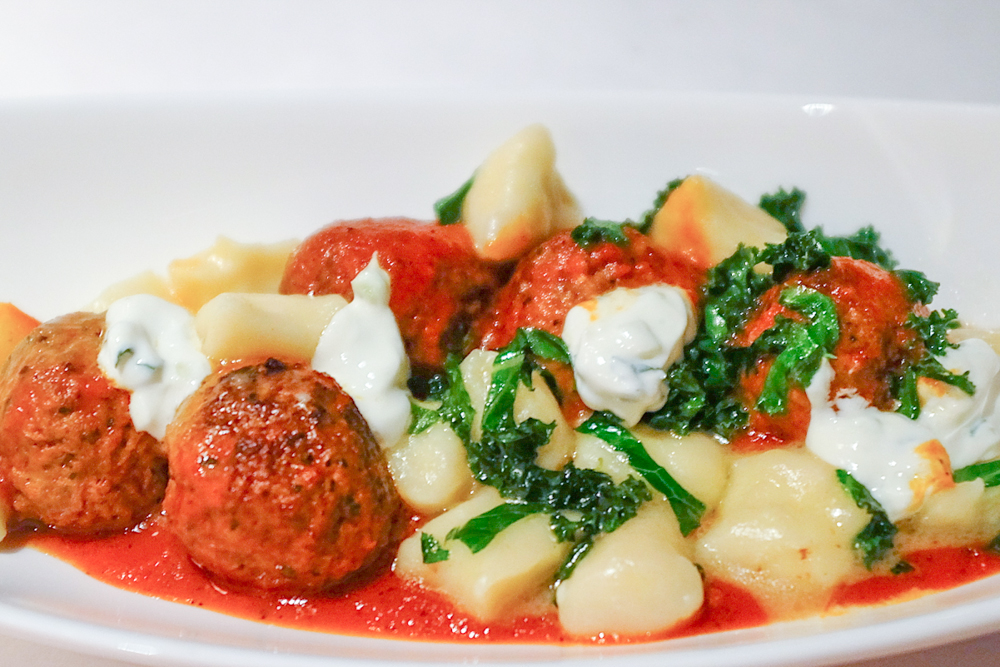 In April I had dinner at Michelle Bernstein's flagship restaurant and, frankly, it was lackluster—the meal revealed nothing of the sizzle I've known from previous experiences at Bernstein's restaurants. I wasn't surprised that, shortly afterward, Michy's announced it was closing for a renovation and refresh. The gnocchi with meatballs were the dinner's highlight, a saucy, sassy take on Greek flavors with harissa-spiked tomato sauce and cooling cucumber yogurt. It's one to keep for the menu's makeover. [More on the restaurant]

6. Burger at The Cypress Room, Miami 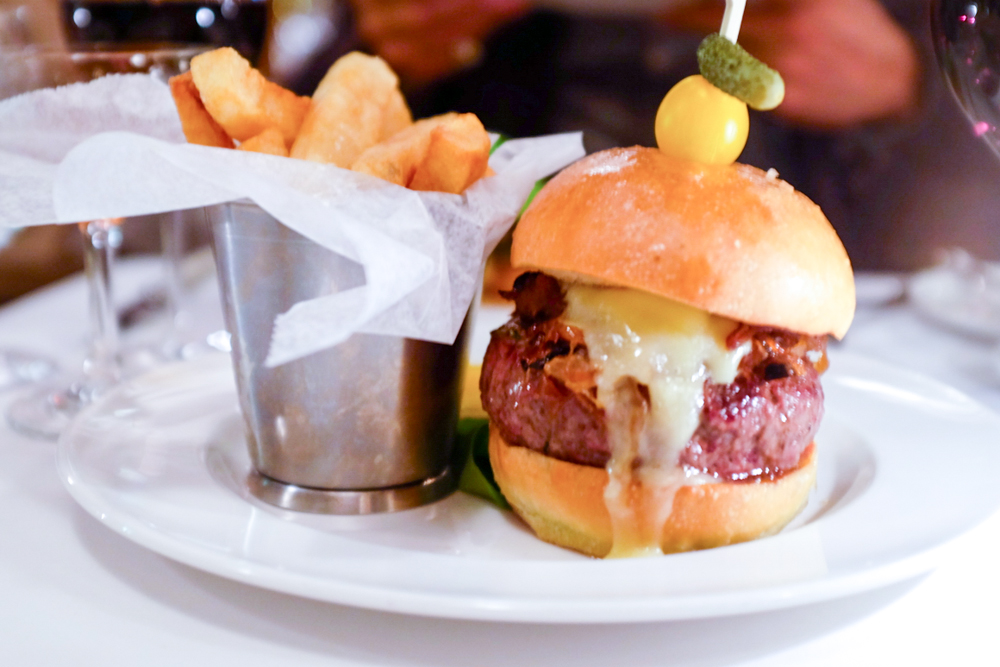 I've been glad-handing burgers of every size and shape in each city I visit, but I'll limit myself to one in this rundown: the upscale underdog at Michael Schwartz's glamorous Design District throwback. This beaut, thicker than a rich man's wallet, is a mixture of ground chuck and the trimmings from dry-aged côte de bouef, varnished with onion marmalade and an oozing New Hampshire cheese. [Read the full review] 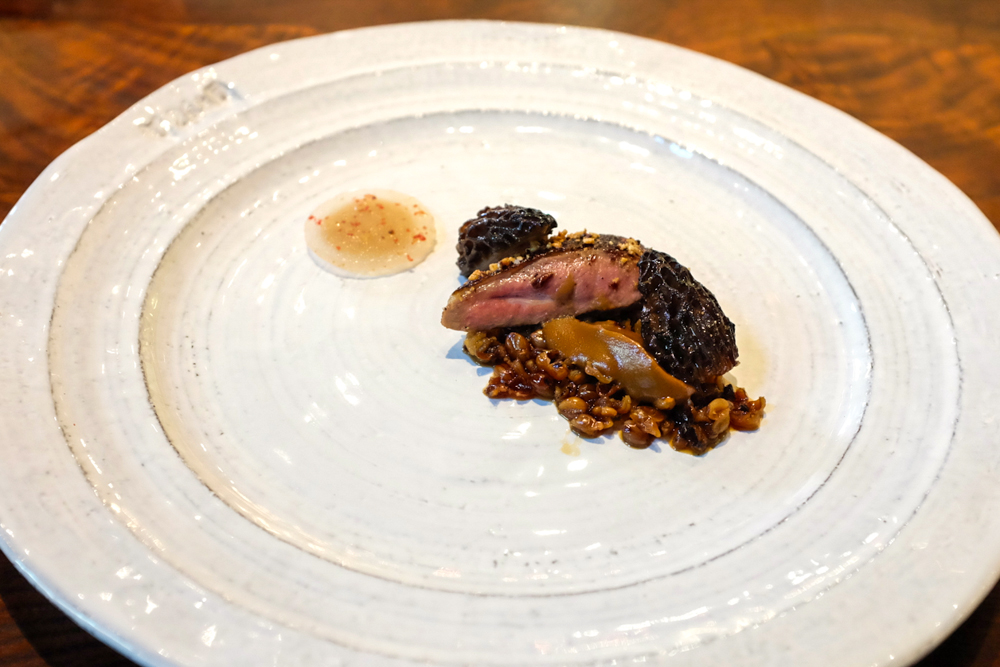 Joshua Skenes skews toward seafood and vegetables in his cooking, but a meaty centerpiece of my $863.91 solo dinner at Saison was rosy wood pigeon aged for two weeks, roasted briefly, swabbed with sunflower seed butter, and flanked with forcemeat-filled morsels. On the side? Papery circles of pear sandwiched with pear butter and spiced with red peppercorns and nutmeg. [Read the full review] 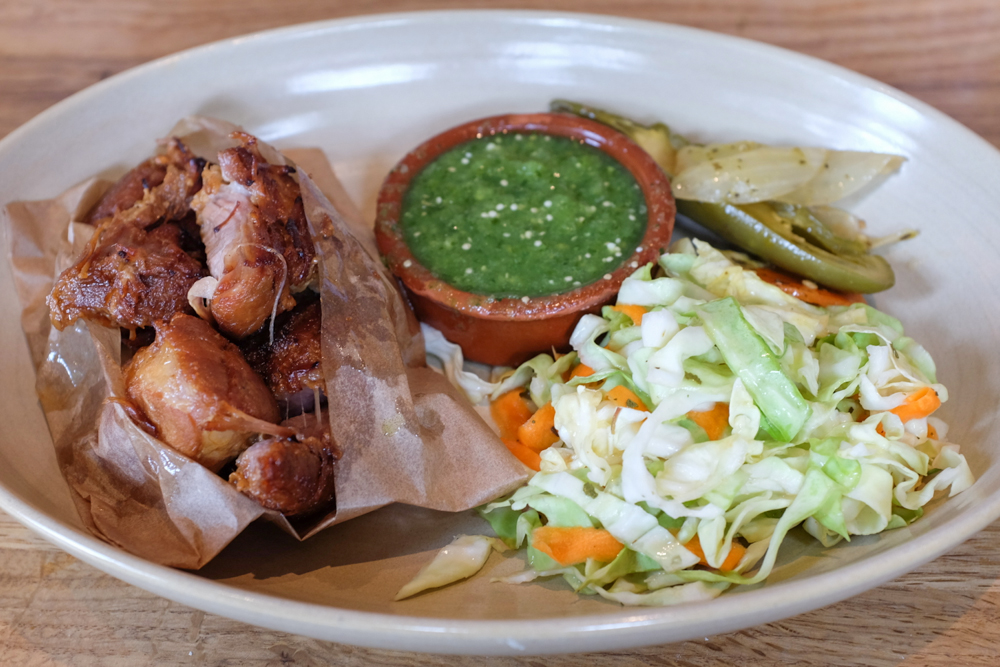 Should scoring reservations or claiming a bar seat at Nopa prove trying, consider lunch or dinner at one of the restaurant's two little sisters. Inspired by the staff meals cooked by the line cooks at Nopa, both locations of Nopalito serve clean-flavored renderings of regional Mexican dishes. The carnitas are braised in beer and milk, and seasoned with orange and bay leaf and cinnamon, until the hunks of pork are frizzled on the outside and gossamer inside. They're the star of DIY tacos fashioned from fresh corn tortillas, tomatillo salsa, cabbage salad, and pickled jalapeños and onions. [More on Nopa] 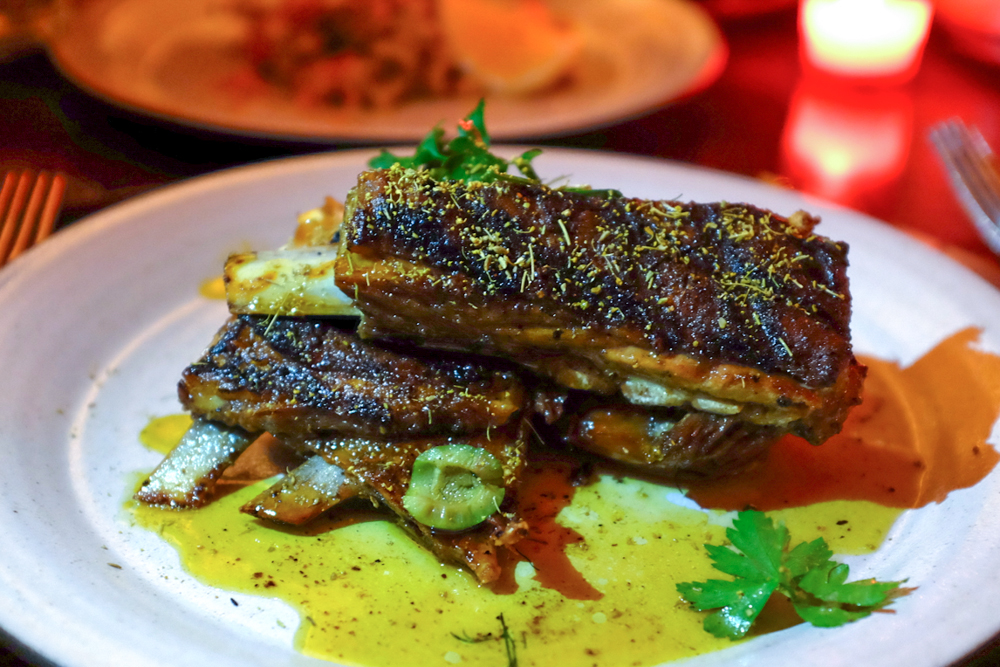 A plate of gnaw-worthy morsels at April Bloomfield and Ken Friedman's first, pricy foray into the San Francisco dining scene. I waited over two hours for a four-top on a Saturday night in May—glad to know that the duo broke their New York rules and now accept reservations at Tosca. [Read the full review] 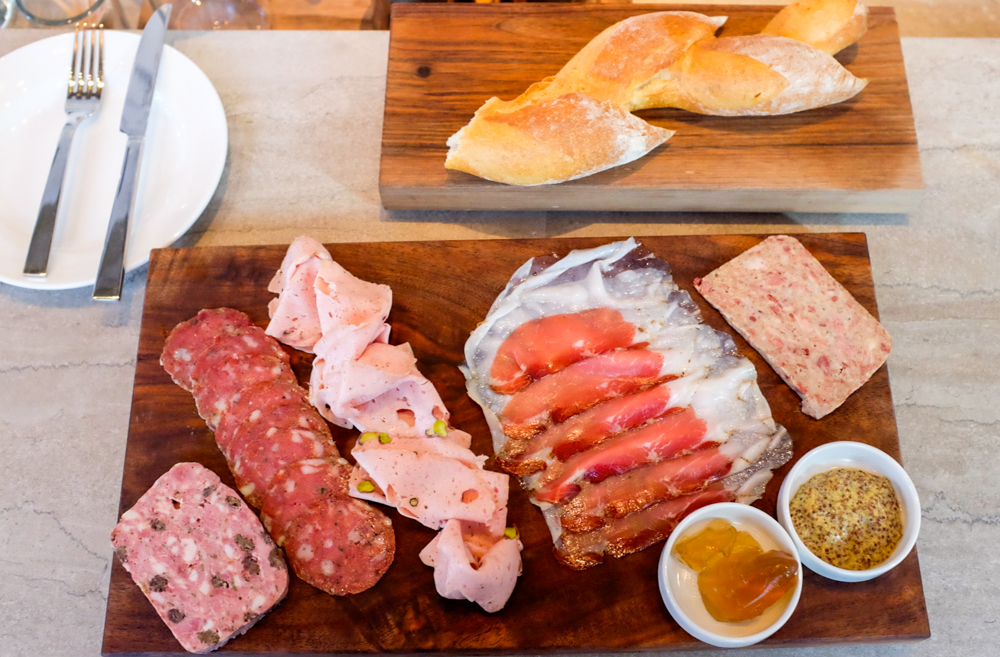 Among many pork-centric dishes on the breakfast, lunch, and dinner menus at this newcomer in SF's SoMa neighborhood, the salumi and charcuterie selections nab the limelight. This spread, which included pork pâté speckled with mulberries and a particularly silky iteration of mortadella, and a cocktail laced with Armagnac or Calvados kick off an evening brilliantly. [Read the full review] 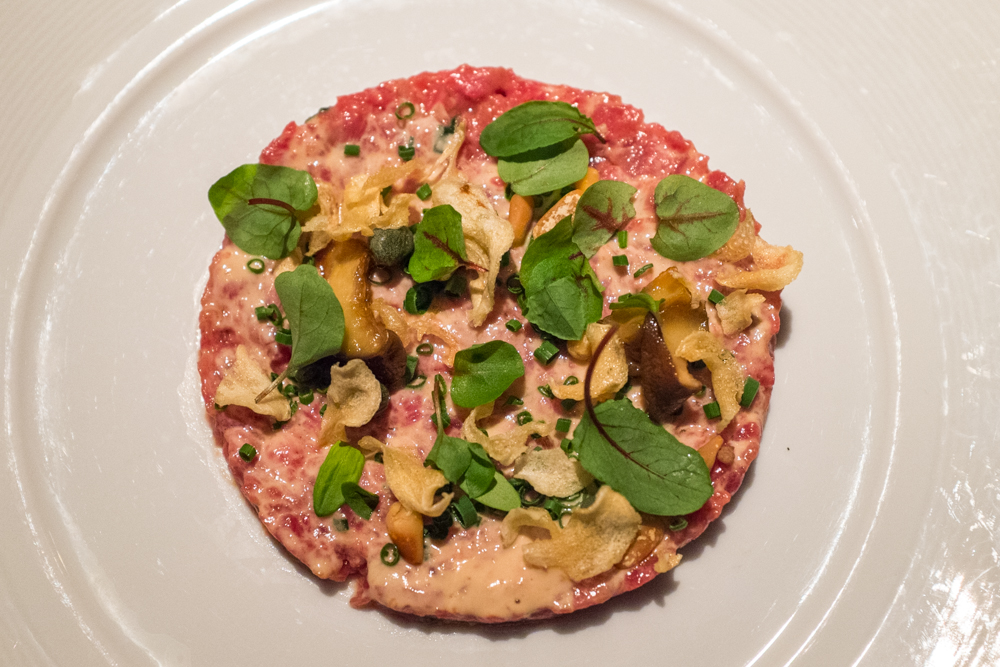 A perennial favorite at Danny Meyer's bastion of comforting pleasures, the tartare was accented with pine nuts, pickled mushrooms, capers, and chives. [Read the full review] 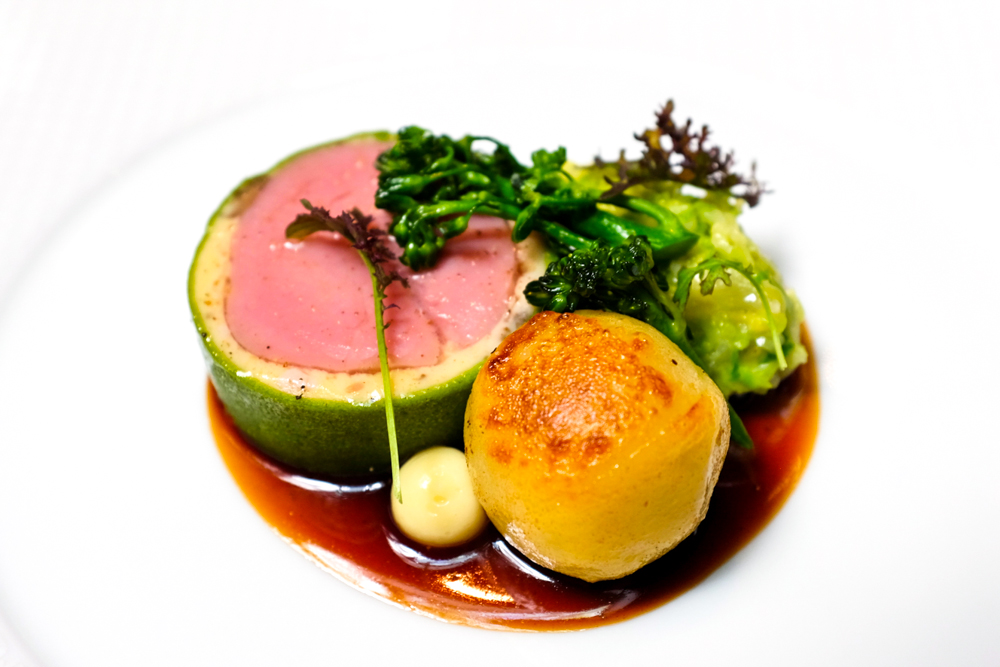 In this dish, the flavors of Poland received the Thomas Keller treatment. Cabbage mousse and a wrapper made from cabbage leaves encircled the veal. The pierogi on the side was formed from potato pasta and filled with a ragout of diced, corned veal heart. A quenelle of buttery cabbage hid behind the broccolini. [Read the full review] 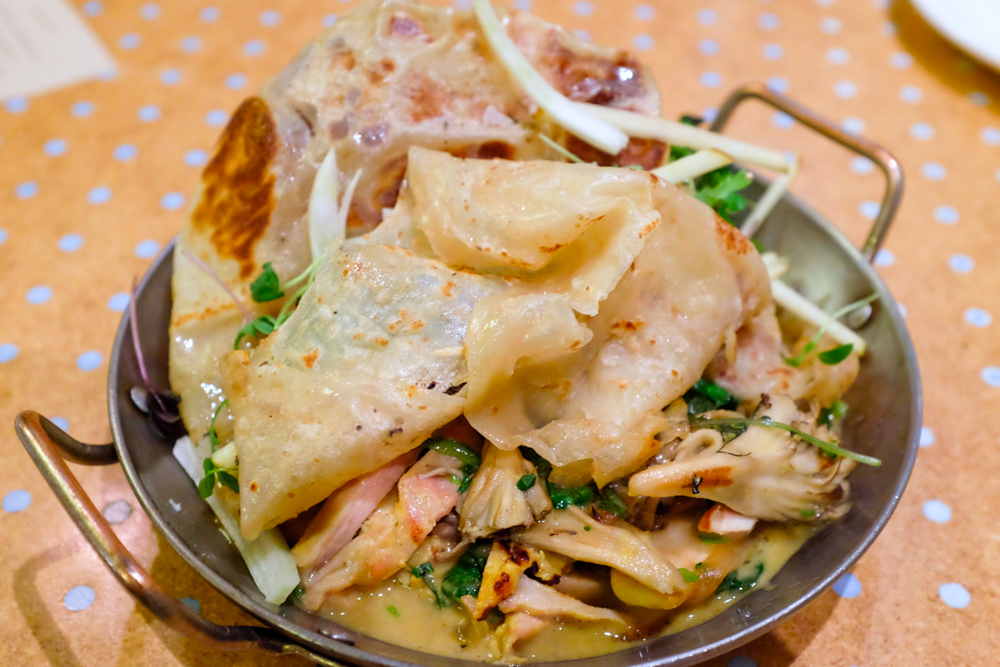 Two of us finagled seats at State Bird, arguably the toughest reservation in the Bay Area, on at Monday night around 10 p.m., when the restaurant's famed dim sum-style cart service was winding down. I didn't sample enough to merit a full report (I'll make a point of returning), but the standout among the few dishes I tried was this feisty jumble, zinged with spices, of shredded rabbit, hedgehog mushrooms, and lentil dal—all meant to be scooped up with the satisfyingly greasy roti. [Read the full review] 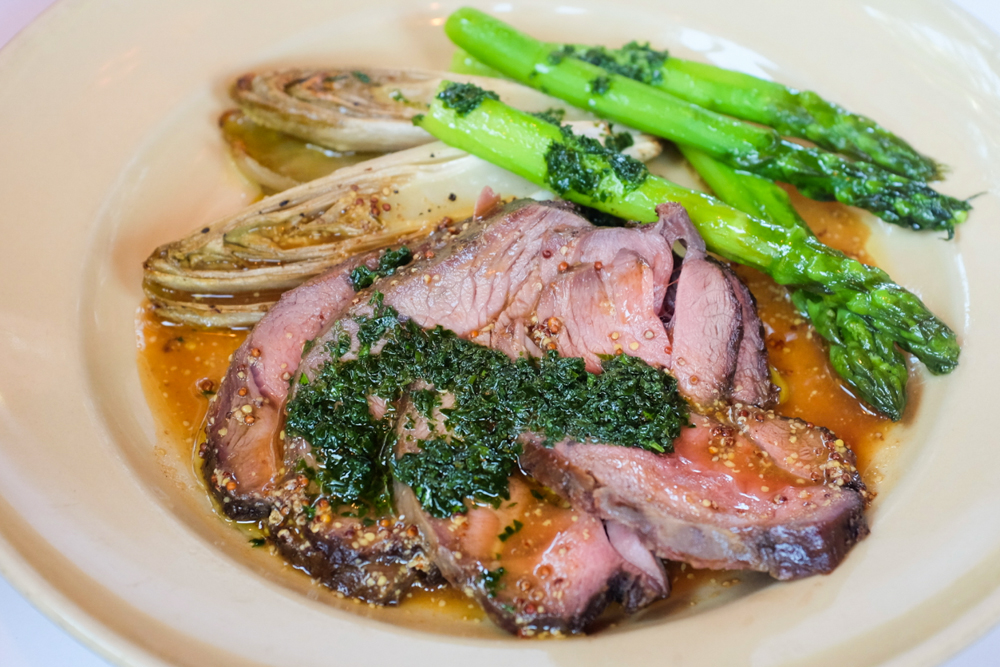 Simplicity never equals boring at the upstairs cafe of Alice Water's still-compelling command center. This lunch entree was a case in point: shaved leg of lamb with mustard seed sauce and salsa verde, the asparagus and braised endive on the side cementing the meal in springtime. [Read the full review] 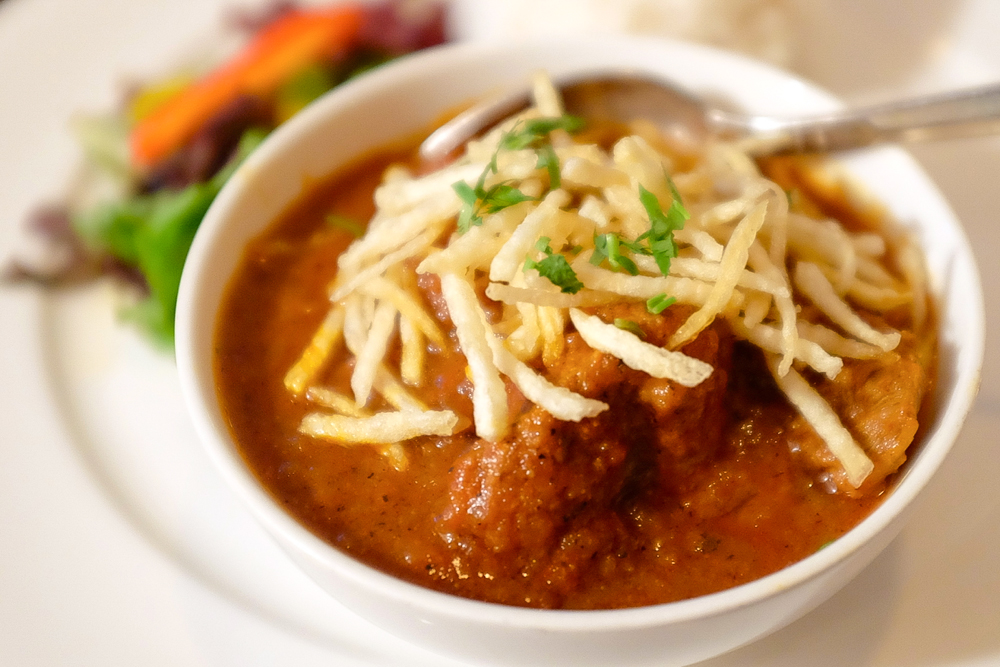 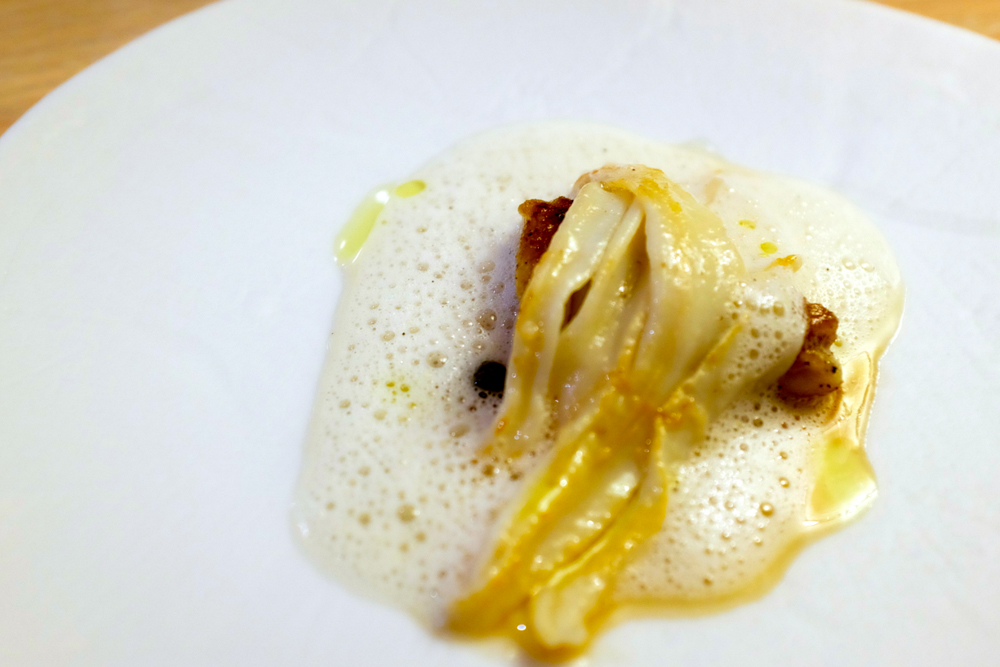 Surf and turf for the new millennium: The dish, which came just about in the middle of a meal of more than two-dozen courses, was as much about the play of toothy textures as it was about the punchy flavors. [Read the full review] 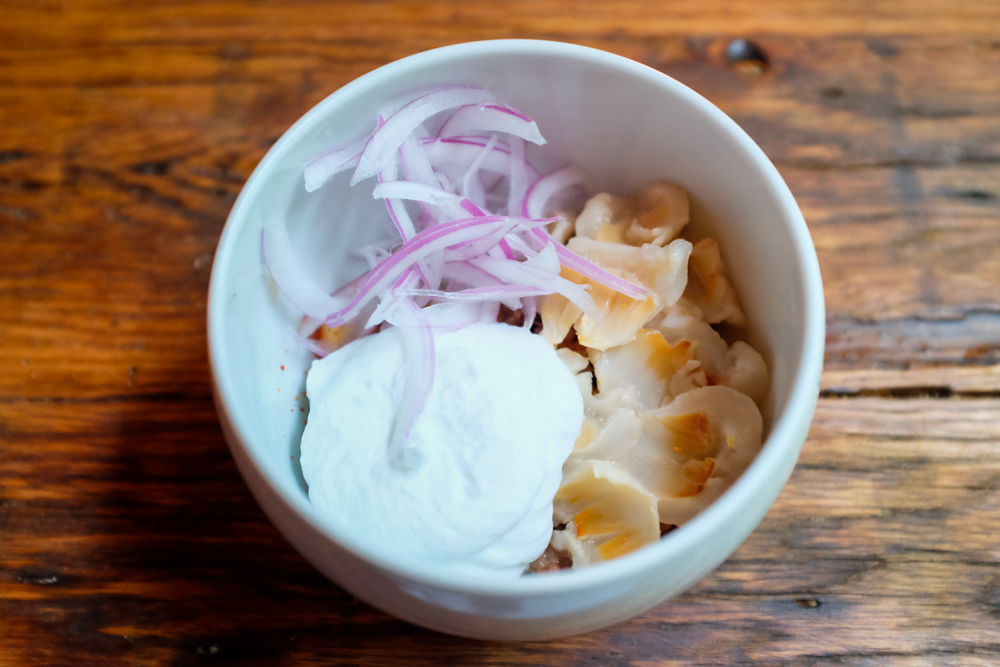 Chef-owner Aaron Silverman's eclectic menu fueled by Asian, Italian, and Southern flavors changes continually, but one of the few constants is this odd-sounding but wholly endearing collage of crumbled sausage, lychees, red onions, and coconut cream. Herbivore bonus: The kitchen will happily make a version using vegetarian sausage. Worth the no-reservations wait. [Read the full review] 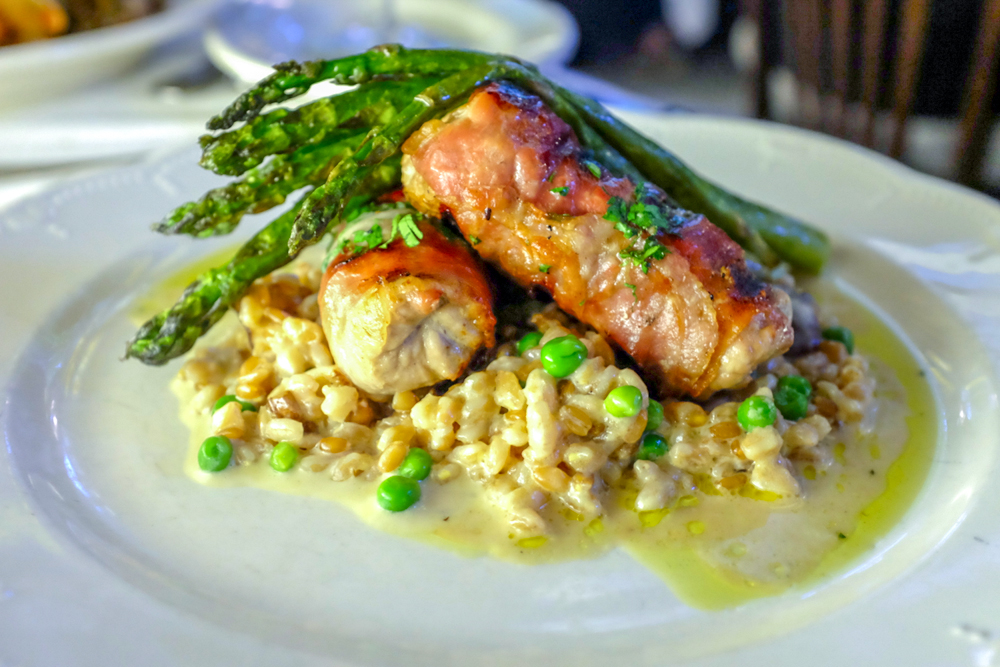 The grilled pizzas and à la minute desserts justifiably hog the attention at Johanne Killeen and George Germon's longtime draw, but mains like the rolled veal cutlet stuffed with Gorgonzola endear in an old-school-red-sauce-joint sort of way. [Read the full review] 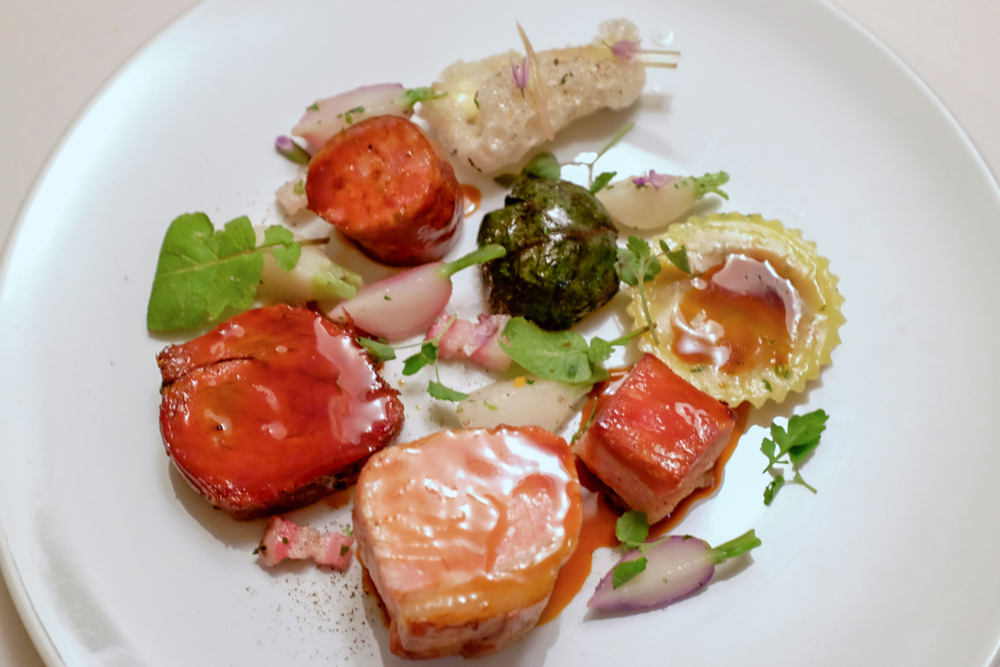 At this quiet special-occasion destination, in a seaside town about 20 minutes from Providence, chef and co-owner Champe Speidel presents even the most carnal of dishes with a refined grace. The porcine glories included smoked and roasted loin, raviolo filled with braised jowl, housemade sausage and braised coppa, and scattered local turnips and radishes. 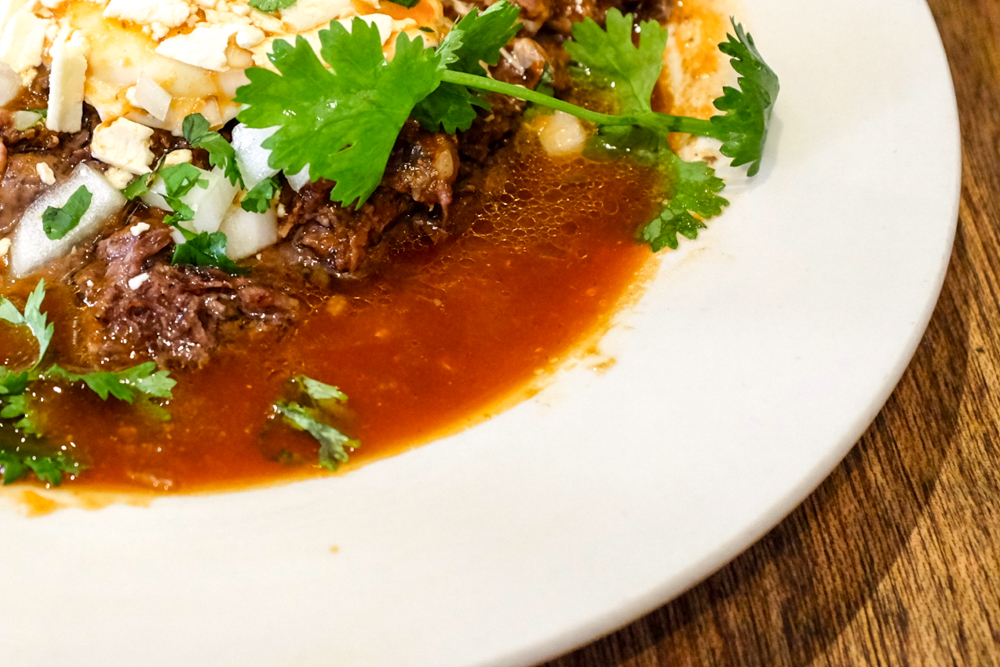 During a recent trip to New Mexico, I had to swing by one of Santa Fe's classics, where breakfast draws an even mix of tourists and locals. One meaty morning frontrunner: slow-cooked shredded beef doused in salsa con chile de arbol (a.k.a. "red" in local parlance) with poached eggs, refried beans, and cotija cheese. 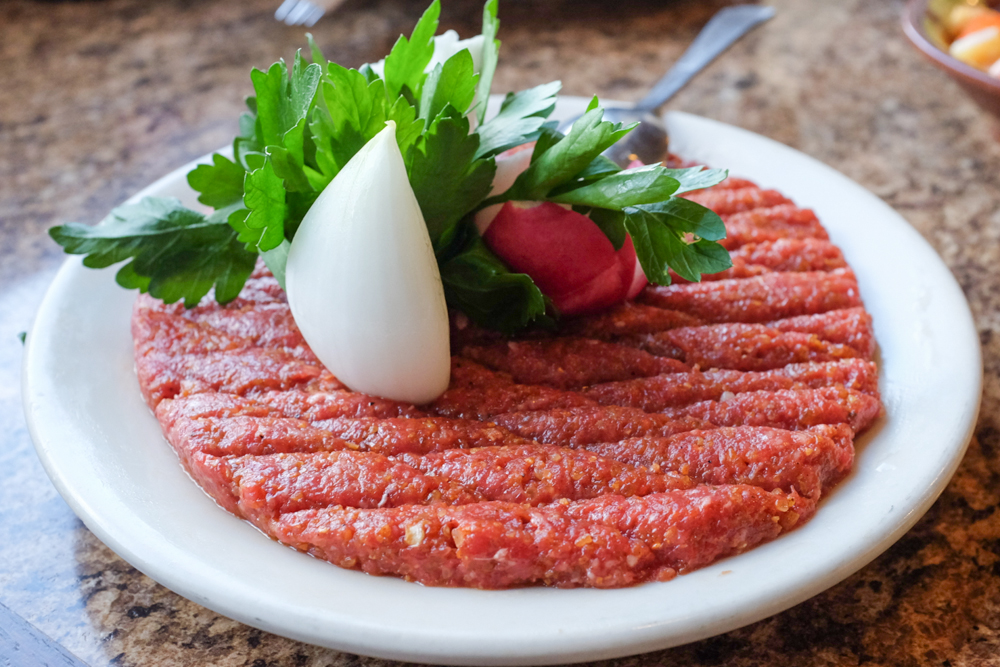 The tartare of Lebanese cuisine: Raw beef kneaded with bulgur, onion, and a mix of spices (including an elusive dash of cinnamon), often bundled into hot pita. It was among many high points of a feast at this cradle of homey Middle Eastern cooking.