Share All sharing options for: What's a Better Deal For Restaurants: Selling Tickets or Taking Reservations?

Welcome to Suttonomics, where each week Eater Data Lead Ryan Sutton looks at facts, figures, and interesting data across the restaurant industry. Today's column is one of two companion pieces on the topic of tickets, an up-and-coming alternative to making restaurant reservations. To read about why San Francisco chef Daniel Patterson is adopting the system, read Amy McKeever's Q&A. 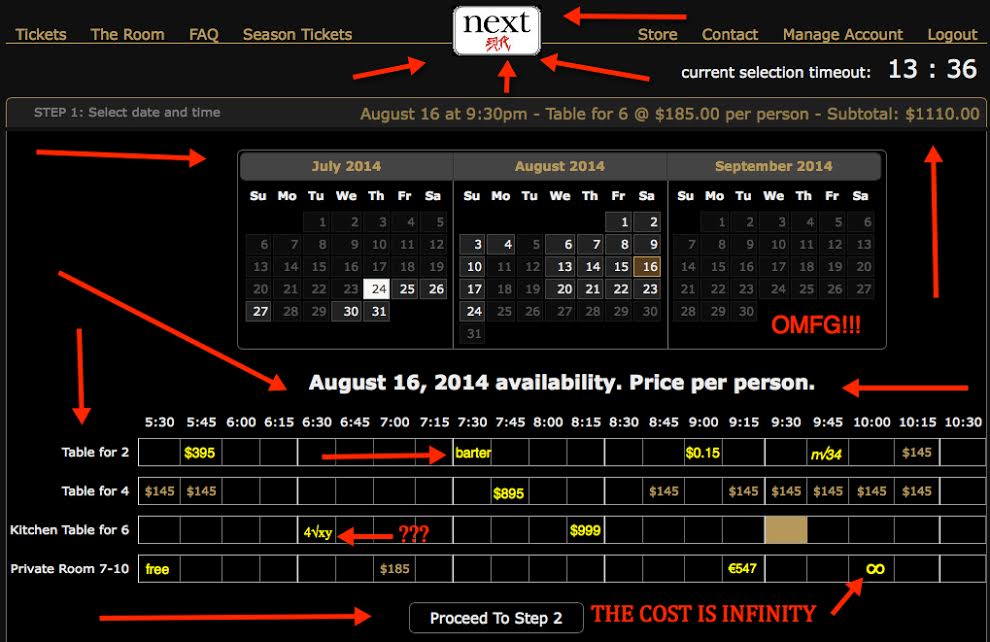 The online reservations and ticketing system from Chicago restaurateur and former derivatives trader Nick Kokonas is picking up steam. It's the same system he's been using for years at Alinea and Next, the duo of tasting menu establishments he runs with chef Grant Achatz. Neither venue accepts phone reservations and diners are charged the full menu price, along with tax, tip, and, in the case of Next, wine pairings, at the time of booking. Like for sporting events or concerts, ticket purchases are non-refundable, with prices higher for peak days, and lower for slower days (or even slower seasons). For a la carte spots — like his The Aviary cocktail lounge — the ticketing system asks for small deposits to hold tables, which are fully applied to the cost of the meal.

Three non-Kokonas restaurants currently use the ticketing system — Trois Mec in Los Angeles, Elizabeth in Chicago and now Coi in San Francisco. And Kokonas tells Eater 10-20 more venues will join the "pilot program" in the next few months. Those establishments, he says, include one, two and three-Michelin-starred venues in New York, Philadelphia, Austin, Phoenix, San Francisco, Hong Kong, Vancouver, the United Kingdom, Europe, and Australia. Around 30 percent of those restaurants — two of which are in New York — will use the deposit system for a la carte dining. Kokonas adds that some of these venues will offer "free" reservation-style tickets in addition to deposit dining.

By September, five venues from the World's 50 Best Restaurants will be using tickets, and Kokonas says he'll have a full 20 percent of that list on tickets within six months. Eventually, the restaurateur says he hopes to be able to host tens of thousands of restaurants on the ticketing system.

So is this system worth it for either the restaurant or the diner? Or does the pricing favor OpenTable, the industry leader in online reservations? Let's break down the Suttonomics to find out. 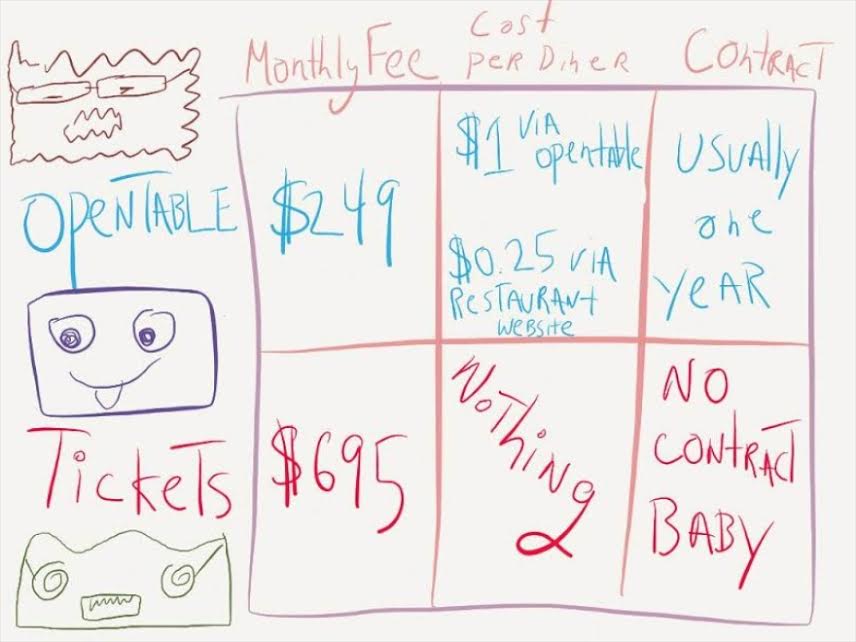 Tickets by Kokonas, a pilot program whose "real name" will be unveiled soon, costs the restaurant $695 a month, which works out to $8,340 per year. That's well above the $249 per month ($2,988/year) charged by OpenTable. But OpenTable also charges $1 for each seated guest who books a table through its website, or $0.25 cents for each guest booked through the restaurant's website. Tickets charges nothing on top of the monthly fee. So for perennially packed restaurants who seat more than 456 guests through the OpenTable website every month ($456 + $249 = $696), Tickets might prove to be a cheaper alternative.

The larger question of course is whether those hypothetical 456 diners booking through OpenTable will feel comfortable ponying up the full price of their meals in advance, or putting down a non-refundable deposit; Kokonas says he's working on a function that will allow diners to transfer deposits or tickets to another day if a restaurant chooses to allow that.

Restaurants like Eleven Madison Park or Noma, with their oversupply of destination diners, should have no problems converting guests to a fully pre-paid system. But how would the clientele at an ambitious neighborhood spot like Oink! in Gowanus react if a $75 deposit were required for a Saturday night reservation? A bit differently, one might argue, which is why the option for free reservation-style tickets will be important.

Tickets is a month to month service; while OpenTable employs one year contracts.

It stands to reason that guests are more likely to show up for a table if they've already paid for it. As such, Kokonas reports no-show rates of 1.5 percent or less at Alinea, the Aviary and Next since his tickets system was implemented. OpenTable has not yet responded to this reporter's request for no-show data. 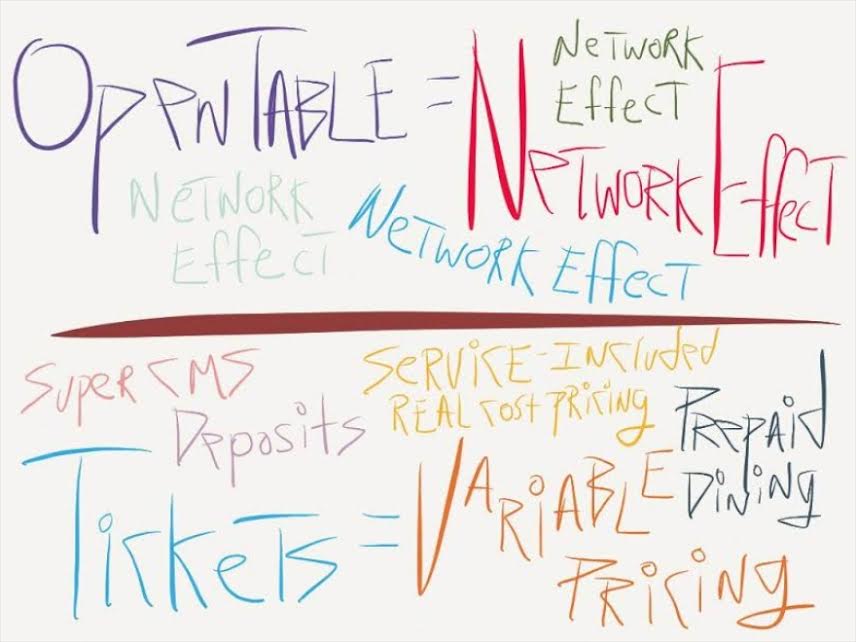 This is the supposed killer OpenTable feature. If a user doesn't know where to eat, she can simply search the OpenTable list of available reservations for a given evening. Or if a user tries to make a reservation at, say, Carbone in New York City, and there's nothing available, she can search for availability at other similar restaurants people booked instead, such as Toro, Lafayette or Alder — all fine venues. And the result is a gain in "incremental tables," which is industry jargon for what happens when seats that might have gone unfilled are now occupied by diners that wouldn't have gone to the restaurant in the first place. To what extent this actually happens is hard to gauge.

As someone who dines out every night, I know where I want to eat and if there's no availability at Toro, I'll go as a walk-in rather than search for availability elsewhere. "Try sitting at the bar" is a suggestion I've never seen on an OpenTable search and that's a point worth remembering. OpenTable profits off you making a reservation; Tickets doesn't.

If the network effect is OpenTable's strongest feature for attracting incremental diners, that's what variable pricing does for Tickets; it helps fill empty seats.

Kokonas, on the Alinea blog, recounts how he booked 46 additional diners on a slow Super Bowl Sunday by cutting ticket prices to $165 (they're normally $210-$275). And while a good restaurant always wants to maintain price integrity — go too low and you'll alienate the customers who paid more — a restaurant also wants to pay off its fixed costs. Just as empty airline seats are worthless after a plane takes off, restaurant food is no good after it's spoiled.

The variable pricing of Tickets can also work for a la carte restaurants; the owner can simply make a $40 deposit worth, say, $45 in the off hours. Would Kokonas ever make a $20 deposit worth $10 during peak hours? "No, because that's an access ticket," he replies.

So the big question is whether a restaurant thinks its business might benefit more from OpenTable's network effect or the variable pricing of Tickets. A small venue that books well under 100 guests per month could very well do better under Tickets if the discounted (or raised) pricing helps attract enough incremental profit to offset the higher monthly cost of the Kokonas system.

It also stands to reason that many of the tasting menu restaurants might benefit less from OpenTable's network effect if you believe that those who dine out at the ultra-high end are generally looking for a specific experience, at a particular restaurant, at the right price, rather than a general tasting menu experience at a variety of restaurants that might have availability. Would you really try to book Le Bernardin and do Per Se instead if the former is booked? If you're a business diner with clients to entertain, perhaps. If you're like the rest of us, perhaps not.

Either way, expect to see more venues using Tickets, some of which might not be places to eat. Kokonas says he eventually hopes to bring ticketing into barber shops, non-emergency medicine, and personal training and other fields which can, according to him, can boast even higher no-show rates than dining out.