One could crisscross the breadth of New Mexico's 121,593 square miles for a month and still not consume all the green chile cheeseburgers its restaurants have to offer. The dish, popular at least since the 1950s, is practically a state symbol. (Chiles, along with pinto beans, are New Mexico's official state vegetables.) I didn't sweep through Santa Fe specifically to eat cheeseburgers—that would have included stops at classics like Burt's Burger Bowl and newcomers such as Shake Foundation—but since they pull focus on so many menus, I ate my share. 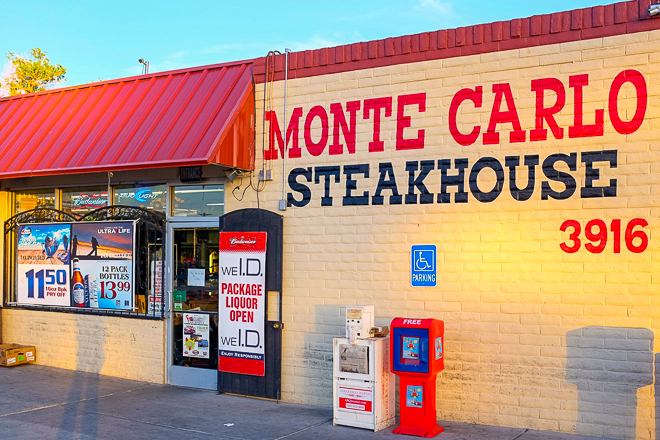 The name doesn't mislead: A chophouse and booze depot cohabitate in a low-slung, painted brick building. Drive the seven miles from the Albuquerque airport for this bulls-eye indoctrination into New Mexico's wonderfully weird culture. A back entrance leads directly to the steakhouse, but it more richly sets the mood to walk in via the liquor store. Regional food authority Cheryl Jamison, who penned a green chile cheeseburger trail map for the New Mexico Tourism Department, mentioned the place to me. With tufted, horseshoe-shaped booths, posters of Elvis and Marilyn, and red pleather seats, the dining room looks hardly changed since The Godfather first ran in theaters. No surprise that the cast of Breaking Bad broke bread here. 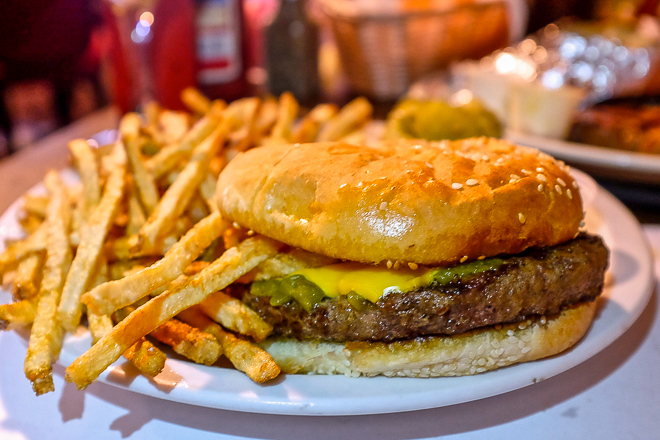 The food matches the atmosphere precisely. Shrimp slung over parfait glasses filled with shredded lettuce and cocktail sauce. Steaks with precise grill marks that looked like they were lifted from Sizzler commercials of yore. Baked potato on the side? Naturally. We weren't sure whether a single maraschino cherry was an intentional part of our complimentary basket of packaged crackers until our server discretely snatched it while taking our order. The green chile cheeseburger far and away stood out. Eating it was like being first in line for the grub at a neighborhood block party: It tasted summery and smoky but also hot and rosy. One slice of American-style cheese merged with the minced chiles slathered over the generous patty. A revelation: the gin in a strong, simple martini magnifies the vegetal warmth of green chiles. Welcome to the Land of Enchantment. 3916 Central Avenue, Albuquerque, 505-831-2444; Open Monday - Thursday 11 a.m. - 10 p.m., Friday - Saturday 11 a.m. - 11 p.m. 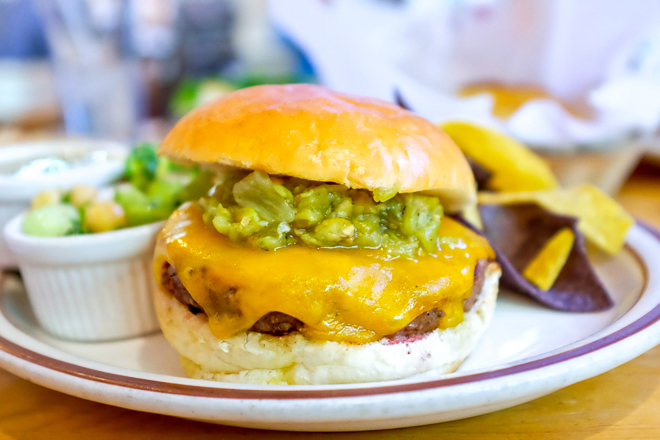 Dining in The Shed's courtyard, or in its colorful warren of adobe rooms, is as much a New Mexico rite of passage as it is a tourist destination. Visitors keep its tables filled night and day, but locals will join them without protest. The Shedburger is a staple of the lunch menu: A third-pound beef patty comes with a molten splotch of American, cheddar, or Swiss (cheddar, please), and a mix of chopped green chile and jalapeño comes on the side, lest it scar sensitive palates. It's a solid effort, but it shouldn't be the only dish on the table. Be sure to order the number five: blue corn cheddar enchiladas nearly swept off the plate by a sea of red chile sauce. The green chile's fresh sting and the aged red chile's dusky heat basically form a perfect food group in Santa Fe. 113 East Palace Avenue, Santa Fe, 505-982-9030, website; Open for lunch daily 11 a.m. - 2:30 p.m., dinner 5:30 - 9 p.m. 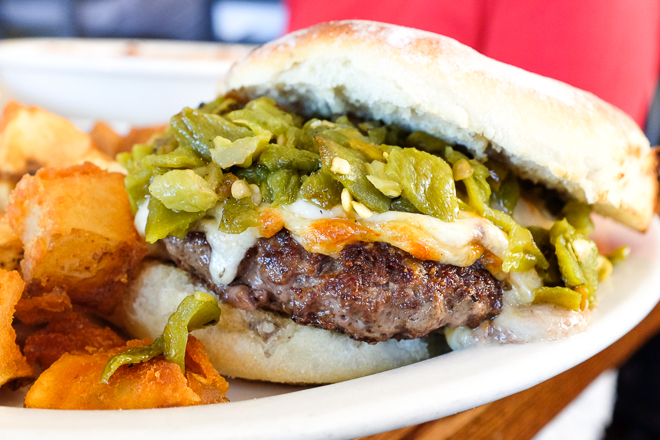 Wince-inducing name, but the restaurant—which began as a food truck and became a brick and mortar last year—resides in a strip mall on Santa Fe's western fringe and is a bustling new haunt for locals. The kitchen prepares the usual gamut of casual foods (quinoa salad, mussels, Cuban sandwich) as well as some finessed versions of regional classics, including a green chile stew tawny with pork and bubbly chicken enchiladas. Theirs is a burger that merits a detour. The cooks use a half-pound of ground buffalo meat (from a herd bred in New Mexico), which they roast in a wood-fired oven, blanket with smoked mozzarella, and heap with roughly hacked green chiles full of seeds for a spicy slap. Don't balk at the crunchy potatoes that come alongside in lieu of fries; you'll want them. 2860 Cerrillos Road, 505-471-0043, website; Open daily 11 a.m. - 9 p.m. 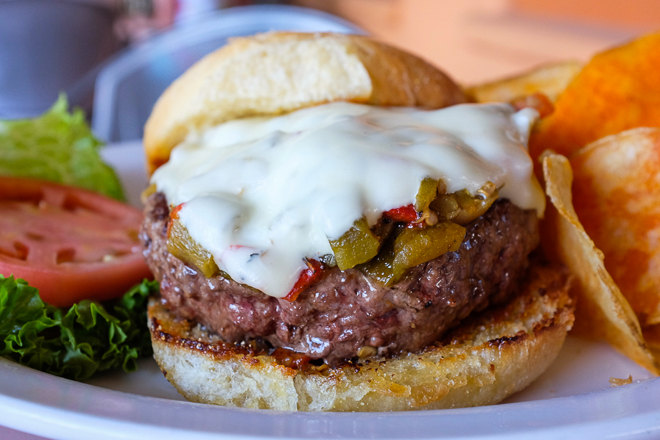 The former Bobcat Bite on Old Las Vegas Highway was revered for decades. Its green chile burger, made using ten righteous ounces of chuck and sirloin from beef raised in Southern New Mexico, was a brute worthy of a Tolkien pilgrimage. The restaurant's dusty, edge-of-civilization location and boxy, 28-seat dining room only served as bait for the seekers. But last year, a dispute between the restaurant's proprietors and the building's owner dismantled the business. John and Bonnie Eckre, who'd run the restaurant for the last dozen years, quickly took over a space inside Garretts Desert Inn, a motel with a quirky midcentury-modern vibe on Old Santa Fe Trail. "I haven't been," scoffed my friend, a longtime New Mexico resident. "It won't be the same."

Well, certainly the bright space is a departure, with its shiny taupe and turquoise walls and its kitschy art depicting antique cars and Route 66 signs. But that burger? Man, it remains a phenomenon. The meat has steak-like depth, and the cheese, a blend of Swiss and American, adds creamy tang to each bite without taking over. The chile's smoky punch is pure and right. The toasted bun captures the juices. This is a American icon you hold in both hands. 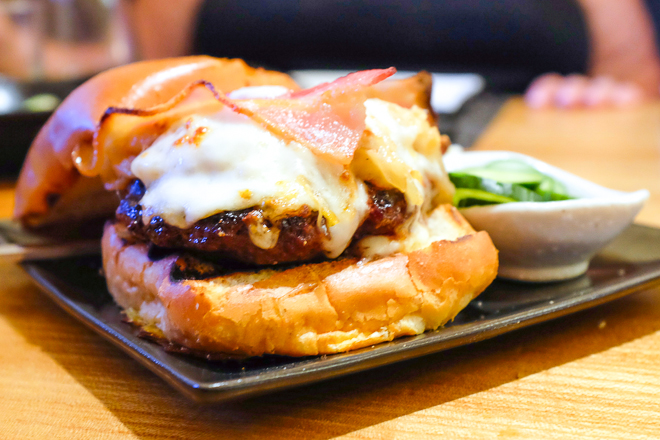 This one's a cheat: It sidesteps the green chile. But it nonetheless illustrates the depth of the state's burger adoration. It's the only savory American item served at the restaurant recently built on the grounds of Santa Fe's famous Japanese spa, Ten Thousand Waves. Ground beef from New Mexico's Lone Mountain ranch, which raises cattle of Japanese descent, is brushed with soy-based yakatori sauce and then gilded with oozy asadero cheese, caramelized onions, and bacon. All the toppings are optional, but they add enough gusto to make you almost forget the green chile. Almost. 3451 Hyde Park Road, Santa Fe, 505-428-6390, website; Open daily 11 a.m. - 10 p.m.