Chef-owner Tony Maws received his share of accolades at his first restaurant, Craigie Street Bistrot, located in a cramped basement space in Cambridge about a half-mile from Harvard University. But in 2010, when he moved his business into the light of a standalone brick building closer to MIT, he ascended to the national map and stayed put. Craigie on Main maintains the kind of ambassador status afforded to one or two places in most every U.S. city—the ambitious, elevated American restaurant led by a perfectionist who keeps pace with trends but never loses sight of his own culinary compass.

The digs certainly fit the part. The room is so comforting it is almost patriotic: brick walls, partly painted and partly exposed; polished wood floors that make the starched white tablecloths stand out in high relief; a wraparound burgundy banquette in one corner. Much of the kitchen is open and in line of sight from the moment you enter. The cooks tango around one another frantically, but their stovetops gleam. They have nothing to hide.

My recent dinner at Craigie showed off Maws' penchant for technical precision. A curling octopus tentacle was seared to smokiness, offset by chickpeas that dissolved to puree on the tongue and a black garlic vinaigrette that pumped out umami. Two scallions, twisted into a complex bow on top, received their own attractive scorching to echo the octopus. The mirror effect in a bowl of squid ink rigatoni was even more arresting: The black pasta was cut to match the shape of squid ringlets, and they had such a similar al dente texture that I had to concentrate on the flavor to distinguish them. Fried clams were too heavily battered for my taste, though I admired how the other, powerful elements of the dish—preserved lemon, pickled peppers, an anchoïade (similar to tapenade) as black as tar—breached the crust to zing the clams. 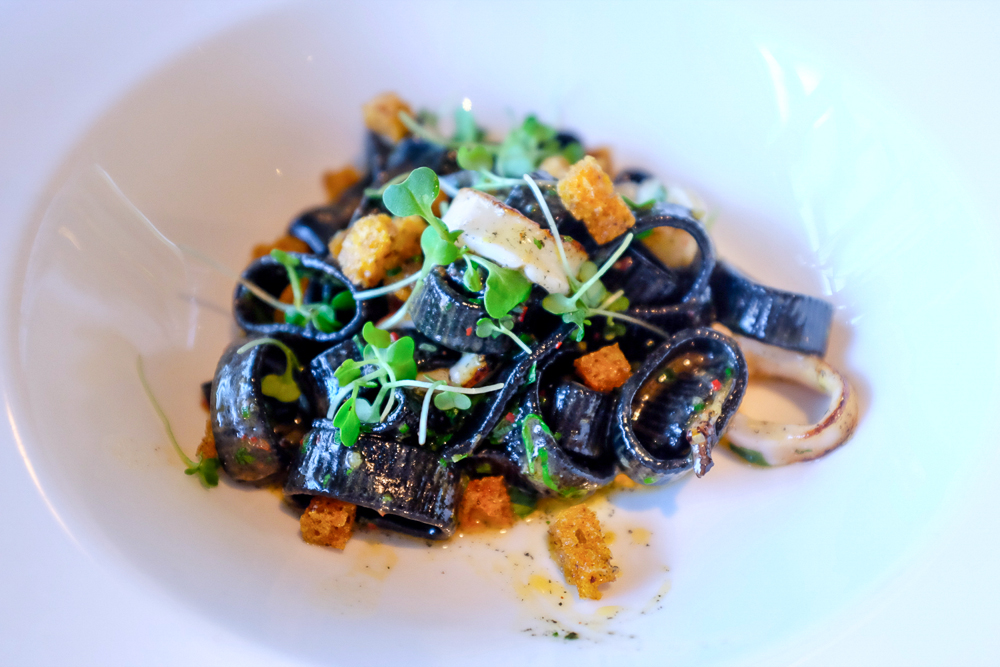 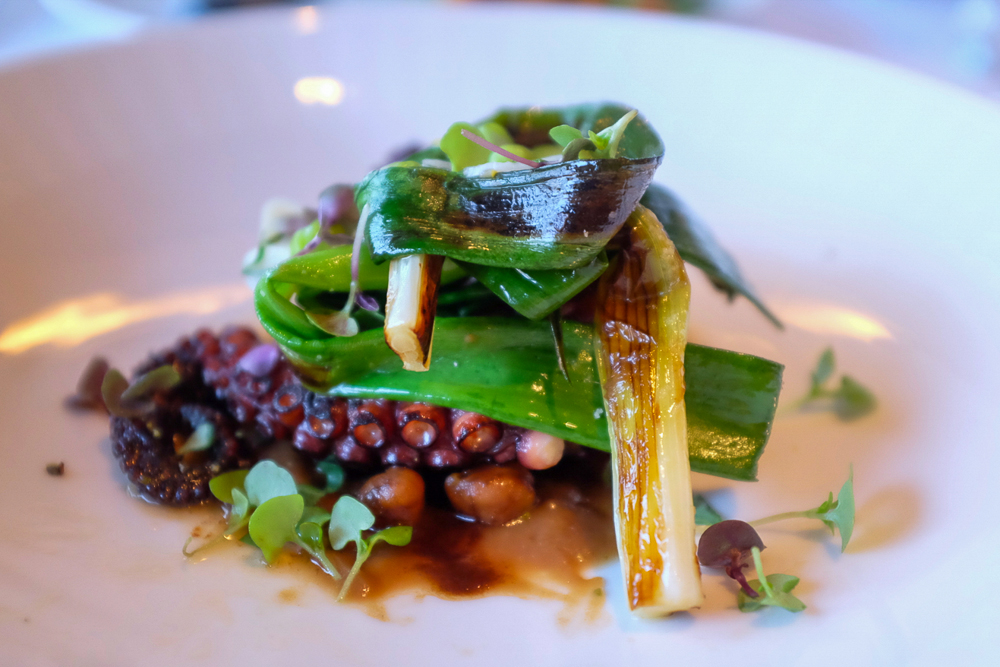 Maws is known for his meaty predilections (one menu signature is confit and roasted pig's head for two), but the kitchen revealed a delicate hand with seafood. Blushing sea trout simmered in olive oil just to flakiness, and, in a nod to Middle Eastern cuisines currently in favor, it was drizzled with tahini vinaigrette. A Levantine gust also blew through a fragrant, soothing saffron-vanilla pudding dotted with apricot sorbet.

It wasn't until the meal's end that I realized how low on the food chain I'd ordered. At the kitchen's pass, the cooks were assembling the restaurant's lauded burger — a half-pound brute adorned with cheddar and homemade ketchup pinged with mace. I should have marched into the bar, where the burger is served (except on Sundays, when it anchors the dining room's brunch menu), and started dinner all over again. 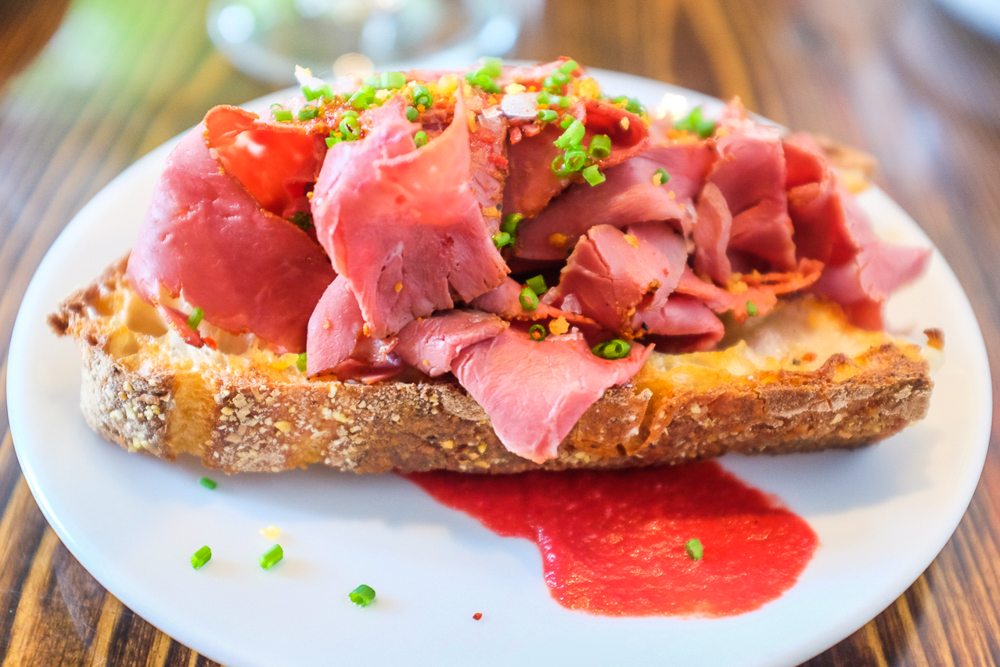 There was no shortage of meat during lunch at Coppa, the Italian-themed wine bar and small plates haunt in Boston's leafy South End. A steel-gray pig sign above the door swung in the breeze. On the table, in the flesh, was the namesake dish—pink and white kerchiefs arranged in a circle around a plate, as veined as radicchio leaves but silky in only the way that properly aged, salt-cured pork shoulder can be. Alongside stood a plate of toast piled with shaved beef heart pastrami, brawny in flavor yet feathery in texture. A slick of harissa under the toast held its own with a jolt of peppery acidity.

Chefs Ken Oringer and Jamie Bissonnette opened Coppa in 2009 as a little sister to Oringer's Spanish tapas bombshell, Toro; the duo have lately been giving their attention to Toro's Manhattan spinoff that opened last year. Coppa has its own ardent devotees, and when eating the most carnivorous dishes I understood why. Bone marrow made a sly substitute for cheese on white pizza, its fatty gush surprisingly soothing among cured beef heart and horseradish shavings that resembled grated parmesan. And there was a lilting rendition of cacio e pepe, ricotta gnocchi with perocino and pepper but with the addition of nasturtium butter that gave the dish an herbaceous lift. 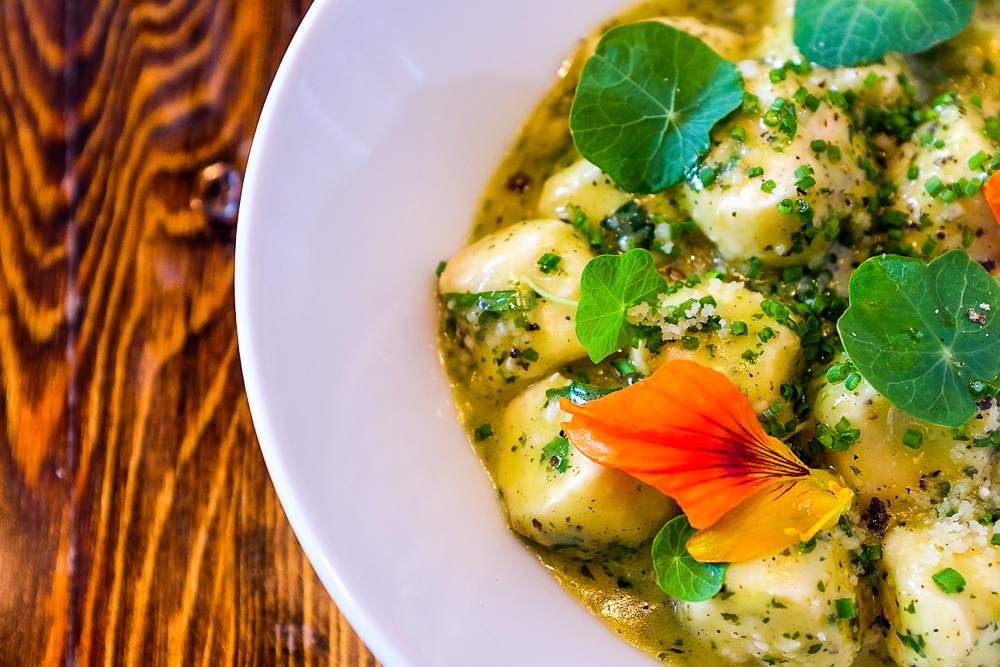 But a few dishes fell flat. One antipasto combined stracciatella with apricots, toast, greens, and a generous trail of caviar into a summery tableau. The ingredients had nothing in common, though, and didn't socialize well as flavors. Metallic-tasting blobs of uni tasted one day past their prime in an otherwise satisfying dish of twisty gemelli tossed among clams, bits of pancetta, and lovage. And I love charred food as much as the next obsessive grazer, but a head of cauliflower looked like it had needed a fire extinguisher. Maybe Oringer and Bissonnette's middle child could use a little extra TLC just now? 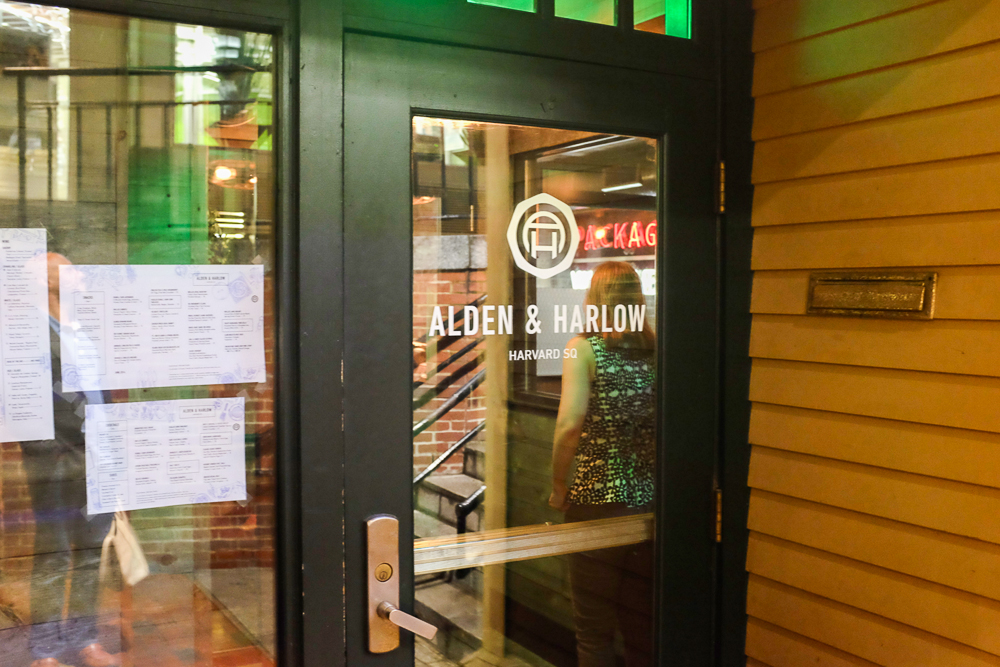 For 50 years the space under Harvard Square's tenacious art house cinema, Brattle Theatre, lodged a bar called Casablanca. In 1996 the owner hired Ana Sortun to help expand the place into a full-fledged restaurant, serving chicken tagine and other dishes with spices that alluded to Morocco. For decades Casablanca was an institution, a convenient, easygoing post-movie hangout: As a college student, I had one of my first legal cocktails there after seeing Schindler's List.

Casablanca finally closed in December 2012, and in its place a year later local chef Michael Scelfo opened his first solo venture, named after the architectural firm that designed the building in the late 1800s. Alden & Harlow is more than a simple reincarnation of a beloved neighborhood watering hole: Scelfo has turned it into one of the Boston area's buzziest new restaurants. 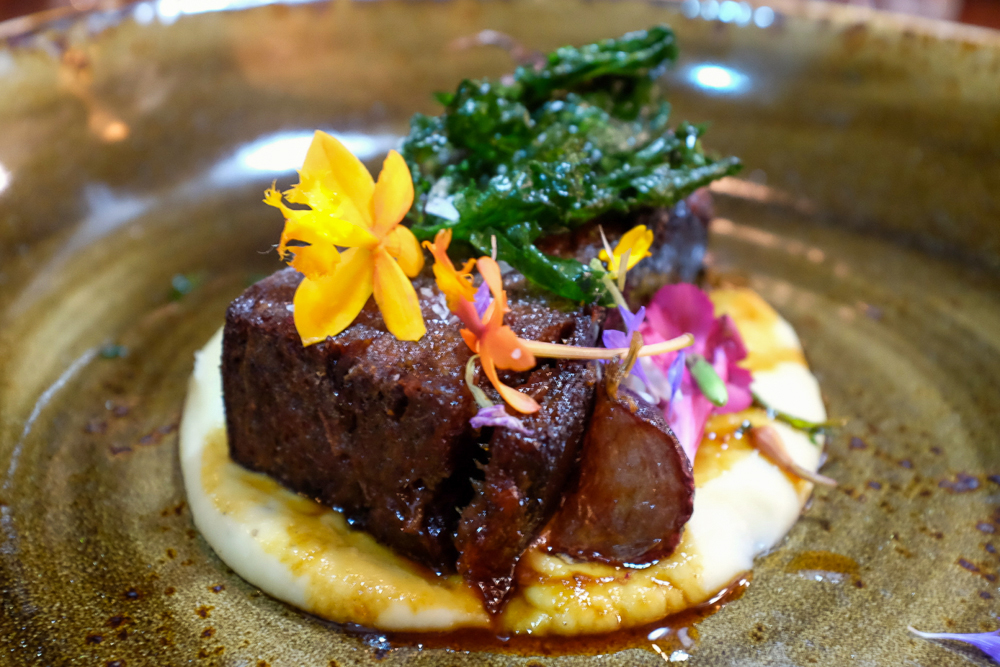 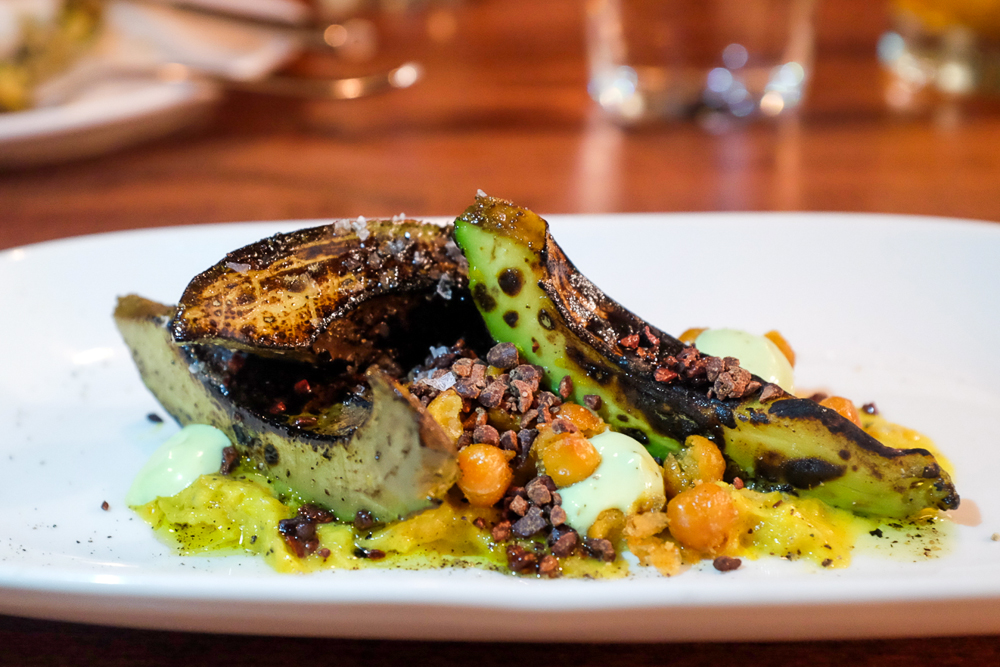 People jam this place nightly, and blessedly the restaurant does take reservations. The crowd is predictably young, and savvy enough to come in groups to share a table full of frisky small plates. Scelfo strikes with gonzo flavors. Chickpeas, green garlic, and cocoa nibs surround slices of avocado smoked and then blistered from the grill. Beef neck, roasted to tender submission, collapses over parsnip puree. Crisp corn pancakes act as a neutral foil for other contrasting elements: glossy shishito peppers, trickles of maple syrup, and a couple fistfuls of chewy popcorn.

As with any small plates menu, the key at Alden & Harlow is to entertain the palate with a span of textures and flavors. Something crunchy: the chicken-fried rabbit, encased in a panko brick and given a gastropub makeover has become an early signature. Something cleaner: grilled bluefish with pickled fish and a cooling celery remoulade. Skip the mediocre desserts and save the calories for another cocktail mellow with sherry or thumping with mezcal. This is sharply conceived food and drink for unwinding and fueling conversation. It should enjoy the same longevity as its predecessor.

Our review of Craigie On Main

Cost
The restaurant constructs the menu primarily as a three-course prix fixe, with a starter, entree, and dessert totaling $67. But every item can also be ordered à la carte: $18 for first courses, $38 for mains, and desserts for $13. The kitchen also prepares more elaborate tasting menus: $98 for six courses, $118 for eight courses.
Sample dishes
Confident, of-the-moment American cooking that pairs local produce and proteins with trending ingredients like black garlic and preserved lemon. The cheeseburger, served in the bar and on the Sunday brunch menu, is legend.
What to drink
The restaurant has a spacious, adjoining bar, and the beverage program is thorough. There are lists of spirits, kicky cocktails like Shore Leave (gin, absinthe-like Dolin Genepy, rosemary, and celery bitters), and a wine selection that homes in on Old World standouts.

Our review of Coppa

Cost
Snacks (crostinis, terrines and small seafood bites) $5 - $10, antipasti $8 - $14, pastas $24-$27 (with half-portions available), pizzas $14 - $18, desserts $8 - $10.
Sample dishes
The full snout-to-tail tour, with luscious house-made salumi and offal insinuated into every Italian dish possible. That includes a pizza topped with bone marrow and shaved beef heart. The omnivorous will find a few rewarding vegetable and seafood options.
What to drink
The cocktail and wine list takes its cues from the Italian menu. But this is a neighborhood hangout, so there are also a dozen or so canned and American bottled beers available.

Our review of Alden & Harlow

Cost
Snacks (smoked cashews, charred broccoli, chips and three-onion dip) $8; small plates range from grilled halloumi ($11) to grilled bluefish with celery root remoulade ($16) to lamb loin with mashed grilled carrot ($17).
Sample dishes
A rambunctious, subterranean hot spot packed with characters of all stripes. The food is frenetic and full of ideas and works more often than not.
What to drink
Cocktails with chutzpah, like a Mai Thai laced with absinthe or the Eastern Slopes highlighting rye whiskey and pisco. IPAs and saisons go down easily here as well.