The Road to the 38: Ranking New Haven's Best Pizzas

Share All sharing options for: The Road to the 38: Ranking New Haven's Best Pizzas

After a friend and I bulldozed through four New Haven area pizzerias on a recent Saturday afternoon, we dropped in on one of my dear pals from college, MaryLee. She was raised in New Haven and now lives in nearby Wallingford with her husband and three children. We delivered them eight boxes worth of leftovers. "Look, kids—apizzas!" said MaryLee, pronouncing the last word as locals do: ah-beetz. The trio swarmed the dining table and started flipping open the cardboard tops. The oldest one, who is 10, went straight to the box that read "The Original Frank Pepe Pizzeria Napoletana." Then he looked up at me, his eyes set in an appraising squint.

"Not yet," I said. "It's only open for dinner. We're headed back in a couple of hours."

"Sally's and Pepe's are the best," he pronounced, reaching for a slice with clams and bacon.

That's a popular opinion, and one I agreed with by the end of the day, though of course I needed to find out for myself. The merits of New Haven-style pizza are well documented: Eater published a definitive guide in March as part of Pizza Week 2014. I'll skip the origins and lexicons, then, and simply recap my experiences through the five area pizzerias with the largest reputations. Rather than sampling the same toppings at each place in an attempt at pseudo-scientific analysis, I instead ordered each establishment's signature pies. I ate no bad pizza that day, though my favorites were easy enough to rank. 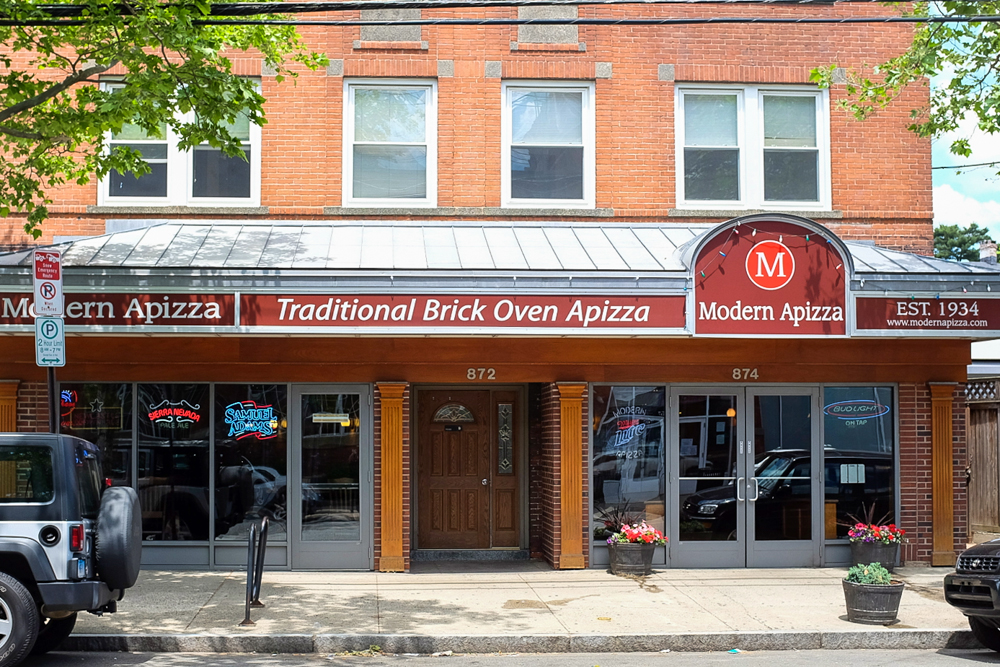 We stopped first at Modern, started in 1934, purely by proximity: It sits a mile away from Wooster Street, the stretch of Italian-American businesses that includes Frank Pepe and Sally's, and Modern is closest to the highway. We arrived shortly after it opened at 11 a.m. The booths in the first of two dining rooms were nearly filled but the place was surprisingly calm. A gaggle of blonde, teenaged-looking servers congregated near the window in the back from which the pizzas emerged. They took turns circulating through the dining room. Their youth would eventually stand out against the seasoned, sometimes grizzled, servers we encountered throughout the day. Between Pepe's, Sally's, and Modern, New Haven's longstanding pizza honchos, this one is by far the most easygoing. 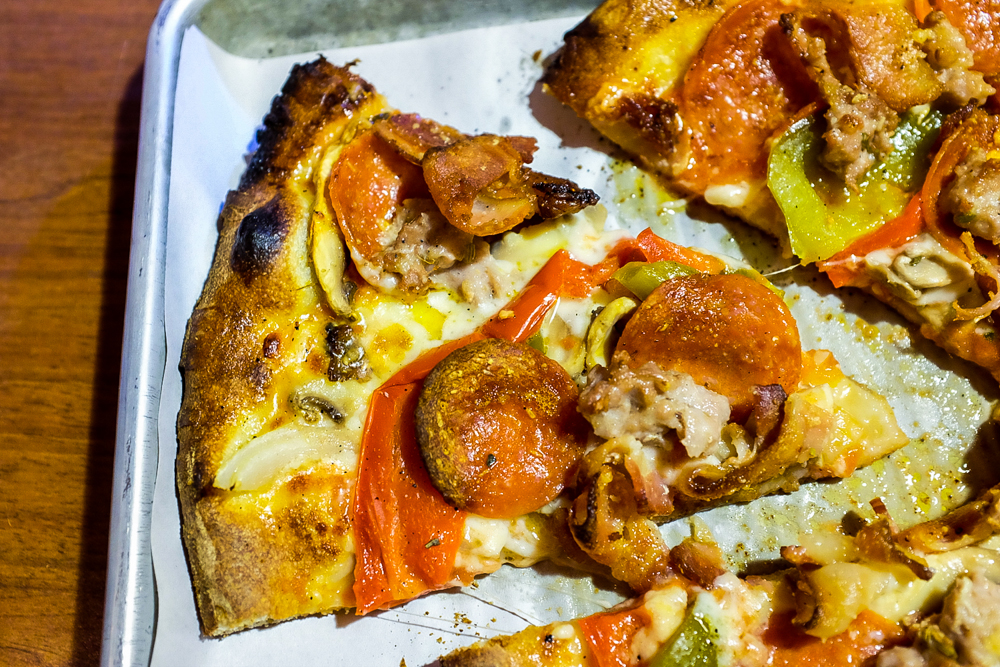 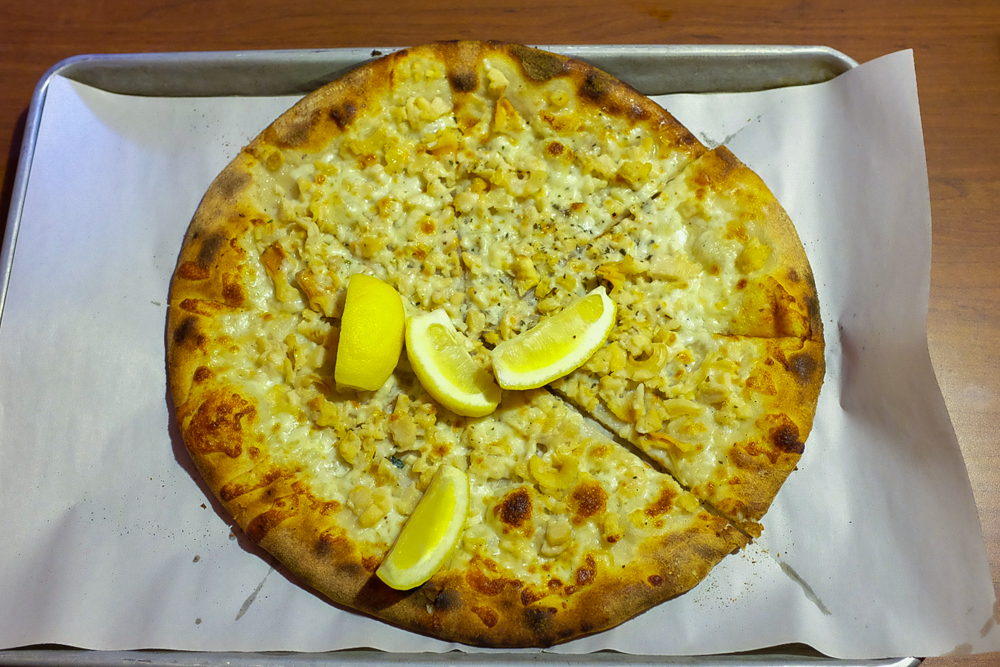 And, to my taste buds, it makes the least striking pies of the three. By national standards it was standup pizza: The cooks pull the thin discs, bolstered with breadcrumbs on the bottom that scorch appealingly, from an open flame brick oven. The lip is puffier than the others I tried, the crust chewier around the edge. We went for the restaurant's famous Italian Bomb, loaded down with crisp curls of bacon, pepperoni, sausage, onion, mushrooms, garlic, and strips of red and green peppers—with just enough "mootz," the native verbiage for mozzarella. We ate quickly, before its center sagged too heavily from the weight of all those ingredients. A clam pie tasted bland, leached of the usual brininess. The place has ferocious local defenders, but I'd return to other New Haven parlors before Modern. Ranking: Four/Five 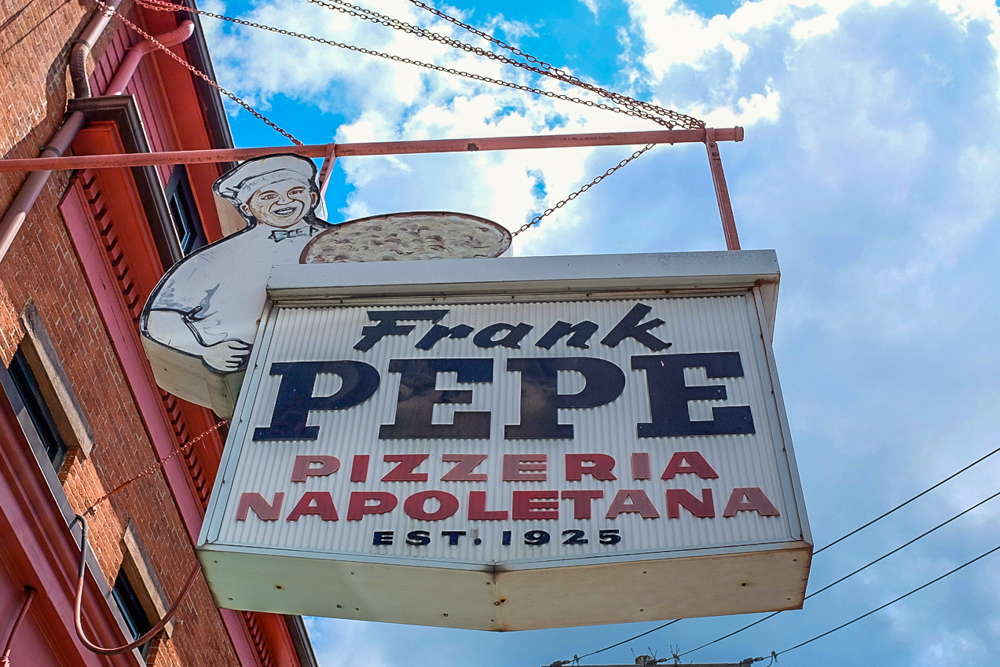 Just before noon, we snagged the last spot in Pepe's parking lot, watched over by a wizened codger that few would dare mess with. It took about 15 minutes to be seated. We lingered in the foyer with a large family driving through from Salt Lake City; the father had read about Pepe's (which opened its first location next door in 1925) in a guidebook. Once inside, I stood under the neon sign proclaiming "The Original Tomato Pies," staring at the massive brick oven whose white tiles have long faded to a besmirched yellow. The guy pulling pies out of the oven's black window occasionally rested the handle of his 14-foot-long peel on a hook hung from the ceiling.

Almost as soon as we touched down at our table, the server asked if we knew what we wanted to order. At Modern, I'd tried the legendary birch soda from Foxon Park, the preferred beverage brand in these parts. I hadn't gulped that antiseptic sting of wintergreen since childhood. Now I switched to Foxon Park's Gassosa, a lemon-lime sparkler much friendlier to food. We ordered the house salad in a feeble stab at healthiness. It was a perfunctory muddle of lettuce, tomatoes, cucumbers, cabbage and olive. All of the restaurant's life force flows into the pizzas—as it should. 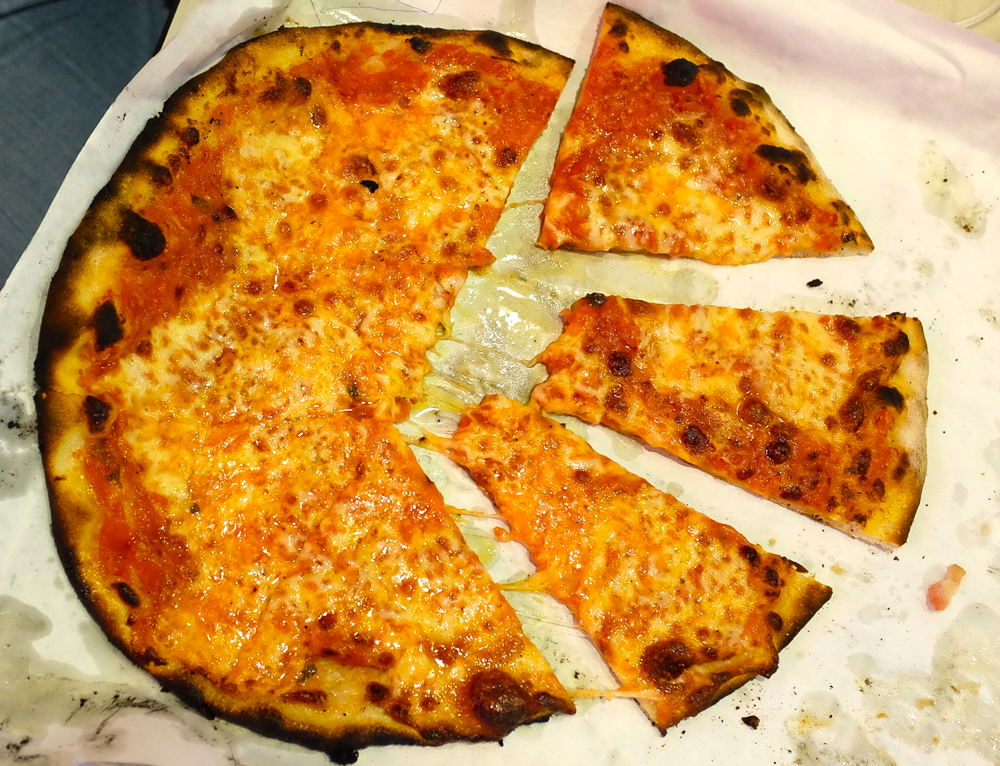 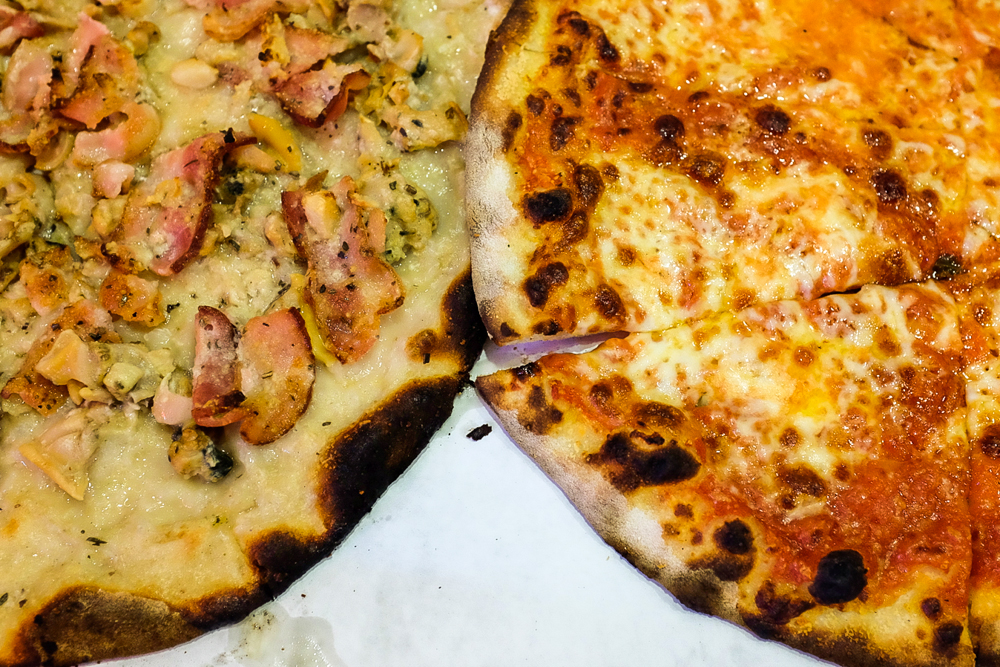 The staff hacked our two lopsided beauties into irregular slices; some were triangular, others rectangular. It was so rich with Italian umami that I didn't care about the shape. The tomato pie with mootz was a prototype for the "plain pizza" we all know, with the border of acidic-sweet red sauce and the golden specks of baked cheese, which mirrored the larger splotches of char that seared smokiness into the crust. Remarkable. Pepe's clam pie was my one previous foray into New Haven dining. This time I added bacon, which mimicked the clams' texture and stoked their saline qualities. Walking back to our car, we saw a line had formed halfway down the block. I'd brave it. If you come to New Haven for pizza only during the day, make this the one to visit. Ranking: Two/Five 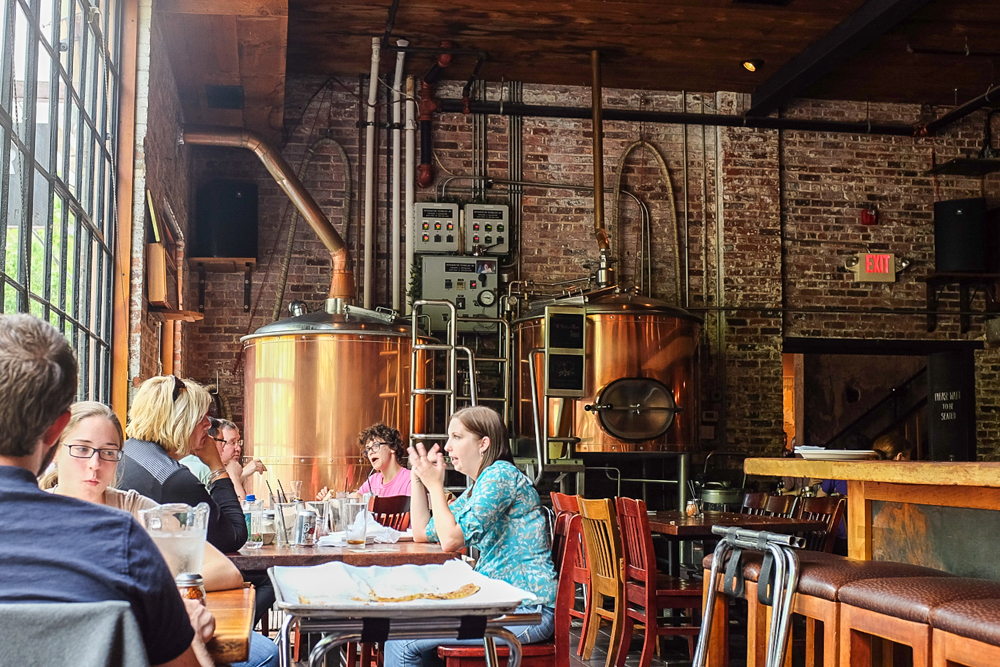 Mashed potatoes on a New Haven-style pie? That's the attention grabber at this relative newcomer, a microbrewery-pizzeria-nightclub that launched in 1996 six blocks from Yale University's campus. The atmosphere leans more toward pub than parlor: loft ceilings, an exposed brick wall flanked with copper brewing equipment, a row of tables against two-story windows and more darkly lit booths across across the room. I took sips of the beer samples my buddy asked for: thumbs up to the pale ale, not so much for the seasonal watermelon creation that tasted like Jolly Ranchers. 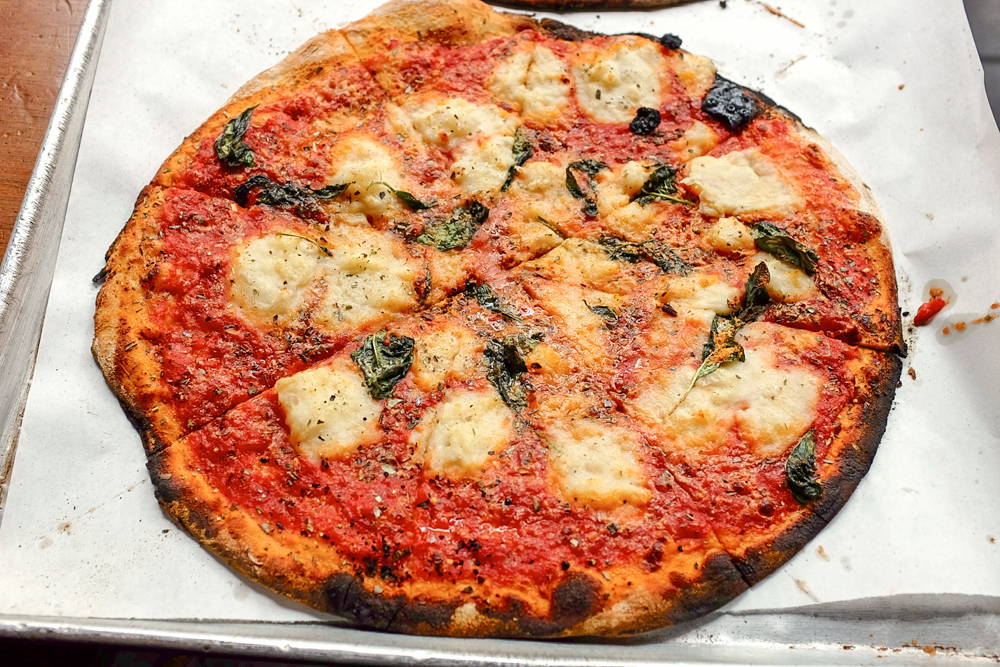 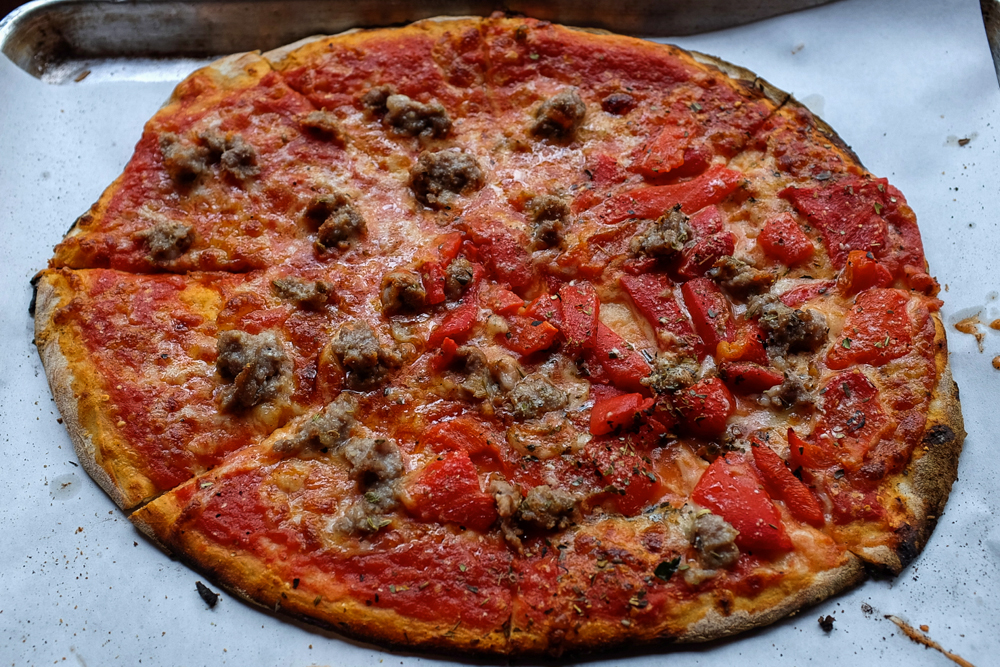 I kept my eyes on the pies. Order a large and the oval pie nearly fills the aluminum sheet tray on which the food is delivered. We asked for two small pies, which came as the classic misshapen circles. I loved the trompe l'oeil of the mashed potato topping: It looked like dollops of mozzarella dotting the surface, though at first bite there was no mistaking the fluffy, nicely seasoned starch for cheese. We tried it on a red pie, no mootz; the combo beloved by the community is a white pie with mootz, add bacon and garlic. Next time. The menu offers a list of toppings rather than pre-designed specialty pies; we composed another red pie with mootz, sausage, and roasted red pepper. I wouldn't pile on any more than that: The crust was the sheerest among the pizzas, but with a satisfying bready flavor. Bar wasn't a letdown; it just had some lethal competition. Ranking: Five/Five 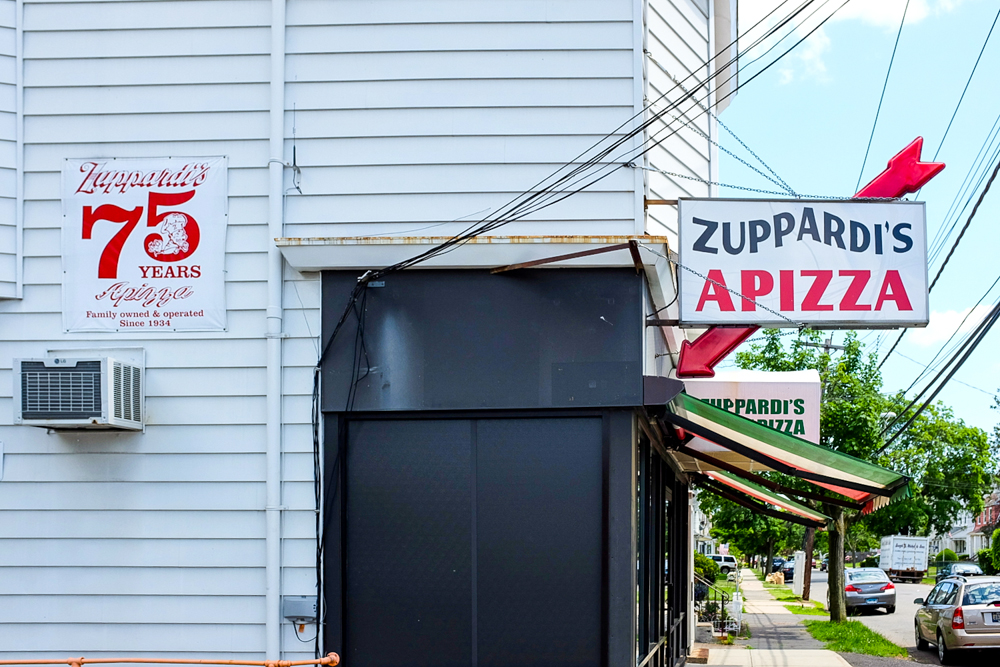 Co-owner Cheryl Zuppardi Pearce scrutinized me at the counter. "Is this your first time here?" she asked.

She leaned over. "We won't disappoint you."

If Zuppardi's, in business since 1934, sells itself a little harder than the other local pizza luminaries, perhaps it's because it isn't in New Haven proper but five blocks over the West River Bridge in a residential section of West Haven. The pizza that makes this place worth a short detour? The fresh clam pizza. We asked for a fresh tomato pie with mootz as well.

"Do you want us to make the tomato for you first?" asked Pearce. "We shuck those clams to order so that pie can take twenty or thirty minutes."

"Should I get the clam pie with mootz or without?" I asked.

"Which do you prefer?"

"Get half and half," Pearce said. "That way you can decide for yourself." 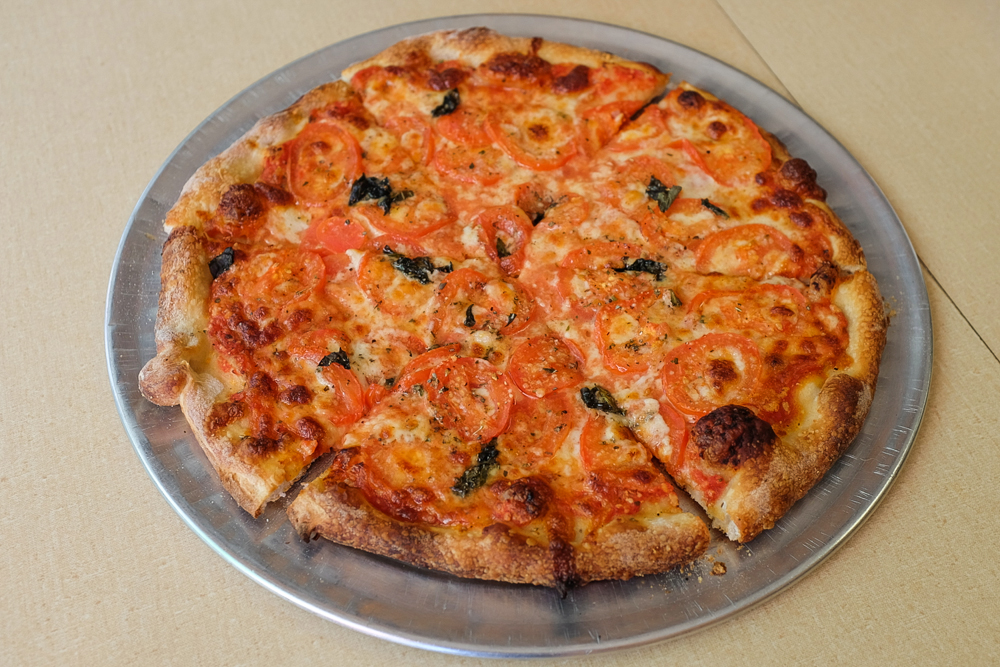 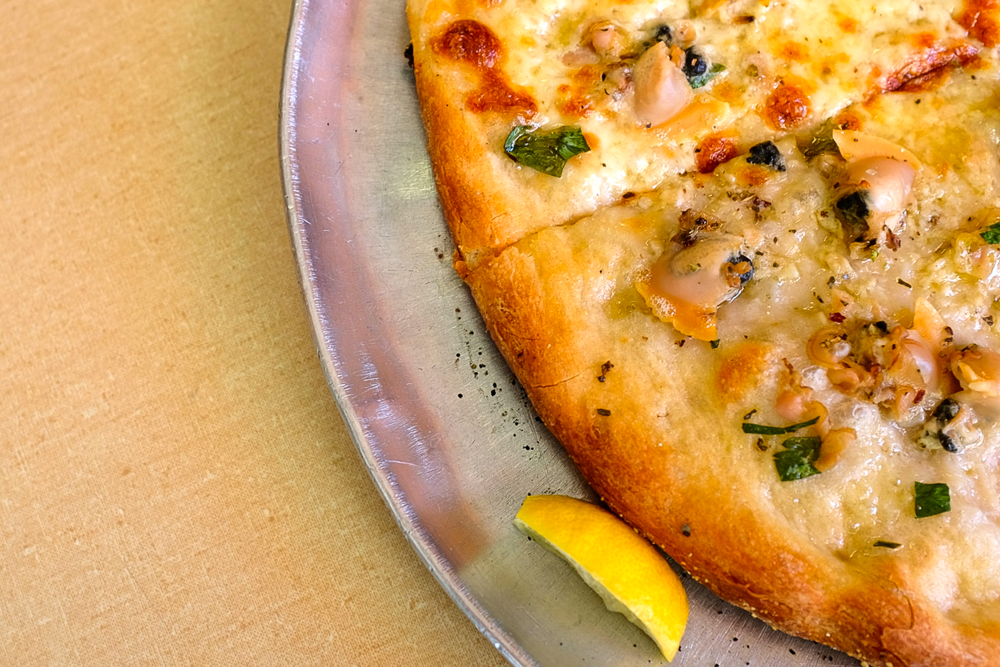 The tomato pie arrived within a few minutes. Zuppardi's fashions the thickest crust I tasted that day, chewy and sturdy enough to handle some serious toppings. (I learned later that sausage pie is a classic order here.) The fresh tomato was a needed break from the pork products I'd ingested at the first three pizzerias—but man, that clam pizza took it to another level altogether. The sweetness of the just-opened Little Necks mingling with parsley, a sprinkling of dried herbs, and garlic didn't need mootz, though I happily consumed the side with the blonde blanket of cheese as well. It more than justified the $22.75 price, though the restaurant also makes a pie with canned clams for $11.50. In any case, a close, close third. Ranking: Three/Five 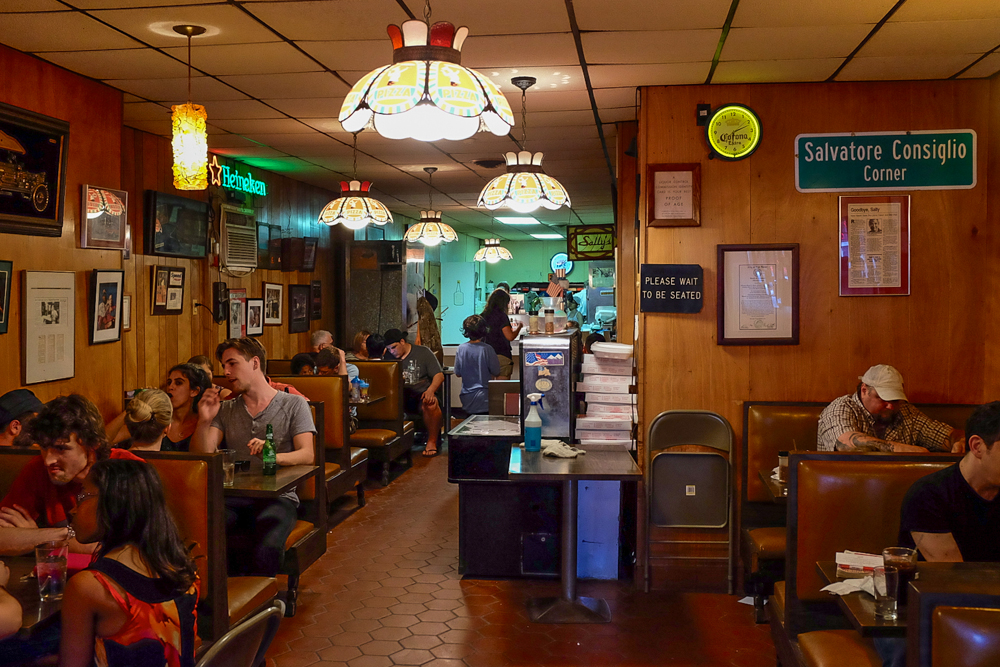 The pizzeria started by Salvatore Consiglio in 1938 and still run by his children is famous for not going out of its way to ingratiate itself to customers. The restaurant only accepts cash. The person overseeing the queue at the door blinked at us indifferently. Our server, wearing shorts and black socks pulled up almost to his thick calves, forgot our drink order. When we waved him down, he mumbled and shuffled off, and it still took ten minutes to retrieve our beers.

All my gripes blurred when the pizza landed. It was if I hadn't eaten all day. The clam and bacon closely resembled the version at Pepe's, though the Sally's baker dared to keep the pie in the coal-burning oven a few more seconds for a sootier singe around the edges, and there was a more generous sprinkling of bivalves. The Garden Special—a white pie with tomato slices, wide zucchini slivers, ringlets of onion, and basil—had a fetching sparseness that allowed the lip of the crackery crust to puff up around the vegetables. 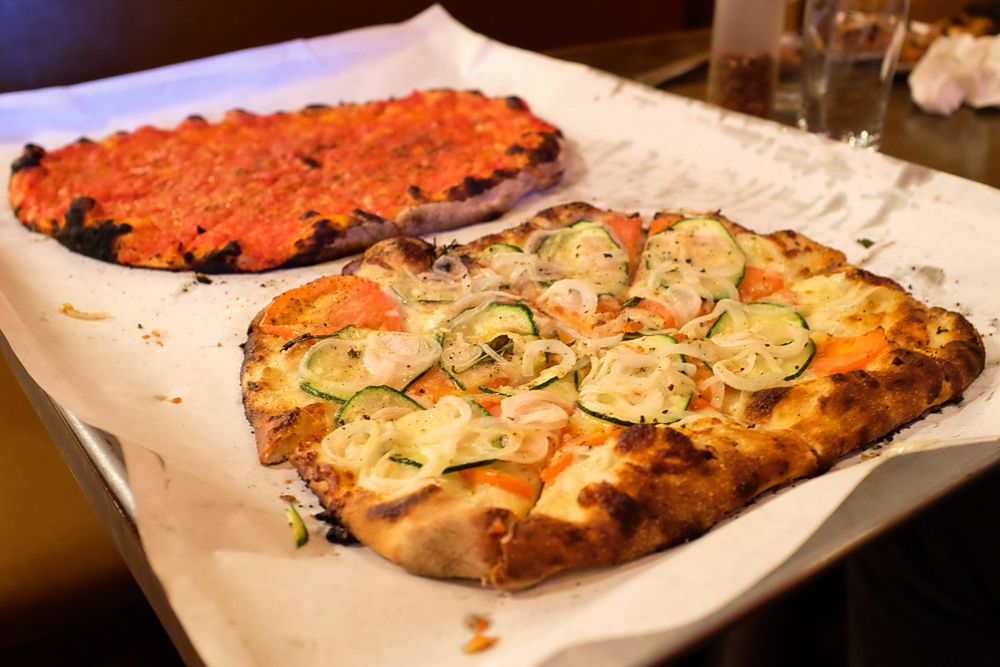 But the real killer was the tomato pie. I suddenly, truly, understood how a pizza without cheese could be a thing of glory. Our waiter had asked if we wanted to add garlic, and I'd nodded. There was also a dusting of dried herbs and Pecorino Romano. The closest comparison is probably Spain's essential tapa, pan con tomate, but in that case the garlic is rubbed on and the tomato spooned over. Blasting the tomatoes and garlic in the heat deepened and caramelized them into something new, something elemental. The tomato's tanginess lit up every corner of my palate. A thousand holy yesses. It made complete sense that parents with small children, college students, and senior citizens all ignored the scruffy digs and staff's brusque ways to savor these wonders.

I woke up the next morning with my hands swollen from the salt of the eleven pizzas I'd gorged on; otherwise I would have torn through the few slices of Sally's I'd brought back to the hotel. I should have eaten them anyway. Ranking: One/Five