Boston Oysters Worth the Wait at Neptune and B&G

Share All sharing options for: Boston Oysters Worth the Wait at Neptune and B&G

Seafood lovers have been eating freshly shucked bivalves in Boston restaurants for two hundred years: Union Oyster House (originally called the Atwood & Bacon Oyster House) has been in operation near Faneuil Hall Marketplace since 1826. These days, the city's modern raw bars serve New England specialties alongside dishes laced with global flavors. I recently bellied up to two of the most popular seafood counters in Boston. 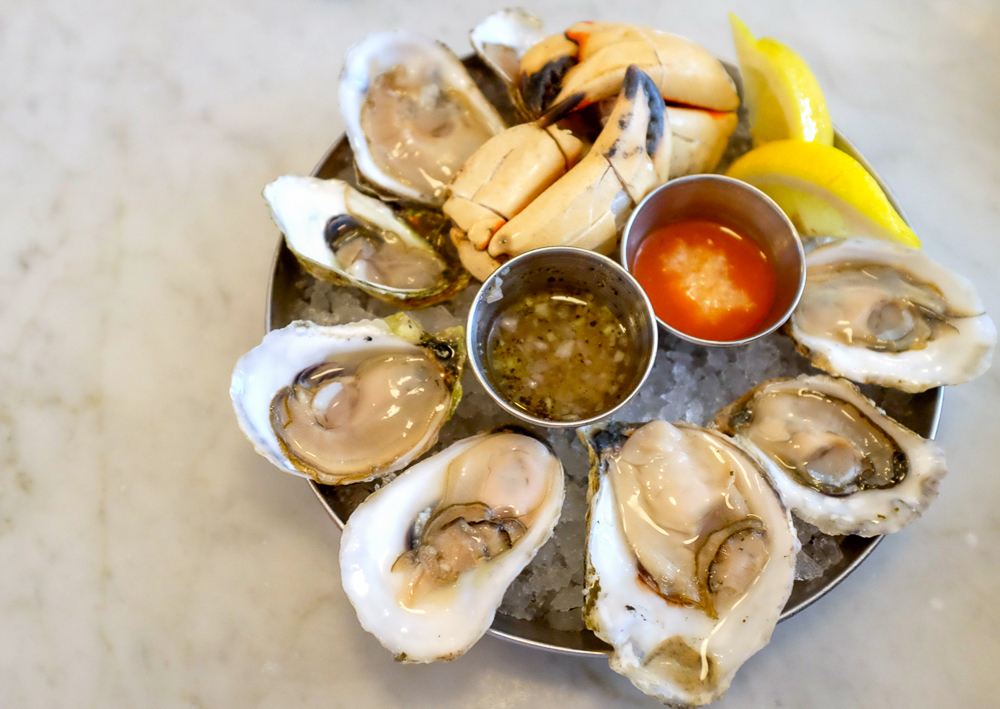 Apparently a dozen of us had the same clever idea: Show up at 2 p.m. for a late Thursday lunch to avoid the notorious lines at one of the North End's biggest draws. Didn't happen. The cheerful server manning the door at Neptune smiled apologetically and told us the wait would be around 45 minutes. This did not surprise my Bostonian friend. To stave off hunger, she suggested we split a square slice of Sicilian pizza (the crust was remarkably light) around the corner at Galleria Umberto. The Neptune server called after 35 minutes, summoning us back for seats at the marble-topped bar.

But simple, regional fruits of the sea lure most strongly, because the place crackles with the frisson of a classic American oyster bar. Customers scrunch in together at the counter or along an L-shaped, candy-apple-red banquette. Globe-shaped fixtures hang from a pressed-tin ceiling; sconces flank mirrors with thick, pewter-colored frames. The mad shucking of oysters and clams leaves a seashore tang in the air.

Our bartender, capable but not especially warm, slid us a sheet with a dozen oyster selections and a few more seasonal enticements. It listed origins and flavor profiles: Onsets from Buzzards Bay, Massachusetts, for example, were medium size, high in salt, and had a "seaweed finish." I appreciated the honest mention that the shrimp hail from Indonesia. We downed eight oysters in quick succession before savoring the dense, sweet meat from Jonah crab claws. Kimchi, the condiment du jour, found its way into a freeform ceviche of hamachi slices over a slick of tomatillo salsa. The straightforward joys of frilly Maryland crab tossed in light Dijon dressing proved more gratifying. 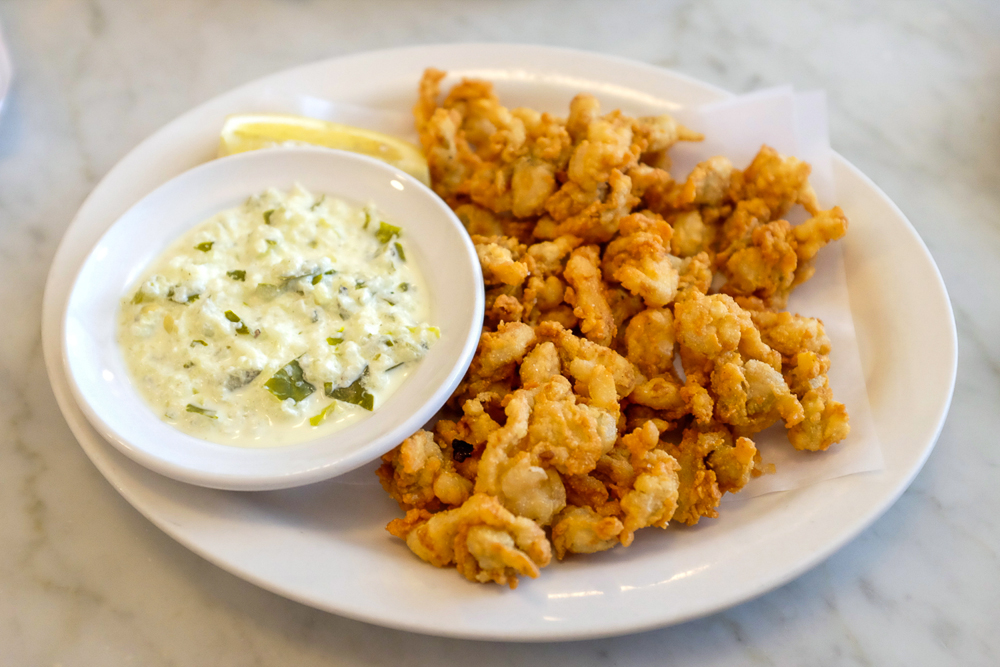 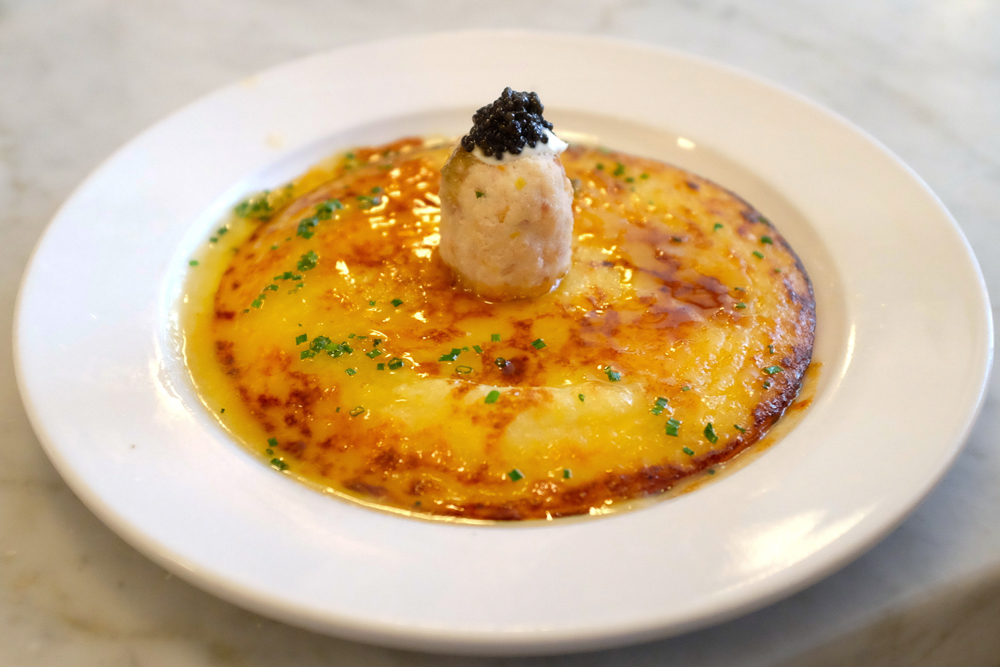 As did two cooked dishes. Properly fried Ipswich clams—crisp-chewy, not too greasy, the oceanic equivalent of potato chips—are one of the great pleasures of New England, and Neptune did them justice. And the meal's surprise hit was the johnnycake, a dish that harkens back to European settlers. For its luxury makeover, it was capped with smoked salmon tartare and a thimbleful of California sturgeon caviar and then saturated with melted honey butter. It arrived as an appetizer but it made dessert redundant. And anyway, this isn't a place to linger over sweets. Someone is always anxious for your seat. 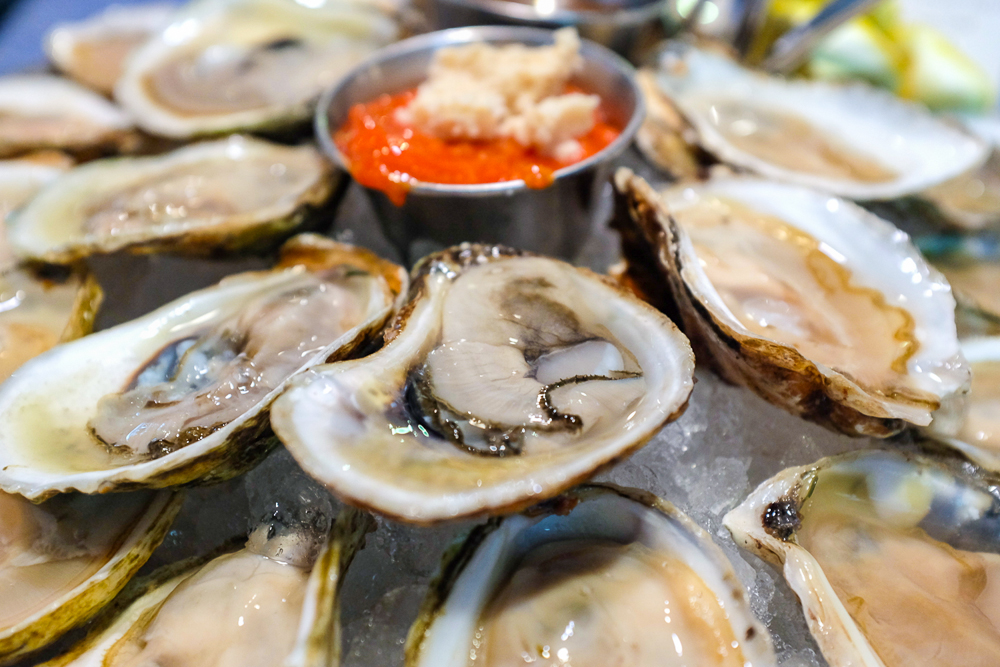 While Neptune feels timeless, B&G revels in its mod vibe. Hexagon mosaic tiles cover a wall in groovy shades of chocolate and shale. Chandeliers, covered in glass resembling flowers set in amber, hang over tables with a metallic finish. Barbara Lynch's intimate seafood bar, which she launched in 2003, sits partially subterranean on a picturesque stretch of Tremont Street in Boston's South End, and the multigenerational clientele reflects the neighborhood's diversity.

Lynch's team—led by chef de cuisine Stephen Oxaal, a New England native—brings in designer regional oysters like Naked Cowboy (appropriately fleshy), Taylor Bay (briny to the hilt), and Little Island (minerally and with cupped shells so pretty you'd collect them on a beach). They're piled under ice in one corner of the center three-sided bar, where one staffer stands tirelessly shucking.

But here, a platter of oysters is as much opening salvo as centerpiece. Gulp down a few and then bask in summer with a salad of grilled, sliced peaches drizzled with yogurt and scattered with crumbled feta and golden raisins. Share a plate of golden smoked shrimp beignets, snatched fresh from the fryer. 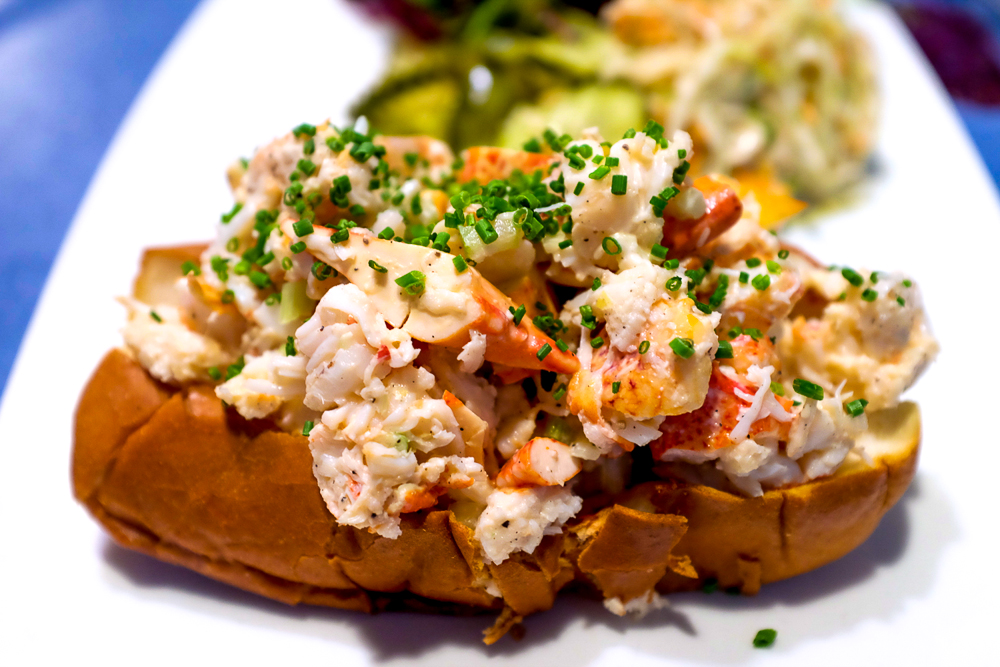 Don't stray too far from the theme, though. Chubby cavatelli sluiced with dried tomato sauce and blanketed with Jonah crab? Pleasant enough. But I'm all in for the fried clams, cleaner tasting even than Neptune's and suitable for gobbling with only a squeeze of lemon. As for the lobster dishes, they will cost you, but they are masterful. The chef touches are subtle in the $29 lobster roll (which comes with fries, house-made pickles, and slaw). Bits of celery and mayo merely perfumed with lemon and garlic keep it homey, and the chives, besides adding their glittery green, infuse a delicate onion nip into each bite. The claw and tail meat tumbles out of a hot dog-style bun. The $30 lobster BLT, with the same accompaniments, could easily be lunch for two. It's a towering act of engineering, with two slices of ciabatta sandwiching a generous mound of lobster salad, which is partly held in place by a lettuce leaf acting as wrapper. Not wanting to concede to knife and fork, I had to attack the thing at angles with two hands. The ripe tomato was splayed at the sandwich's base, and with each bite its juices bled more into the bread, creating a pronounced acidic counterpoint. Ingenious.

I love the town-and-country sense of place at B&G. The food tastes of refined coastline cooking, but you walk out into an urbane block—surrounded by five-story brick apartment buildings, a wide thoroughfare dotted with shops, and cobblestone sidewalks nearby—and you can't be anywhere but in Boston.

Our review of Neptune Oyster

Cost
Freshly shucked oysters vary by market prices: Our ranged from $2.60-$2.90 apiece. Appetizers $11-$17, sandwiches $19-$27, entrees $29-$38.
Sample dishes
Daily selection of oysters, buttermilk johnnycake, fried clams, hot buttered lobster roll.
What to drink
Stay with classic seafood pairings: a crisp white or rose from the short but savvy wine list, or a local beer like the Grey Lady Ale (a Belgian White) from Massachusetts' Cisco Brewers.
Bonus tip
The restaurant doesn't take reservations, and it is a popular destination for locals and visitors alike. With only 15 seats at the bar and 27 seats at tables, the wait for a spot can be upwards of an hour or more.

Our review of B & G Oysters

Cost
Oyster prices fluctuate: Ours cost between $2.85 and $3.10 apiece. Appetizers $13-$17, entrees $26-$32, desserts $7-$9.
Sample dishes
Oysters, lobster BLT, traditional (mayo-based lobster roll), seasonal dishes like grilled peach salad.
What to drink
The wine list isn't cheap but it delves richly into the world of French whites: Burgundies, Loires, and of course Champagne all spark with oysters and lobster.
Bonus tip
People clamor for this place, so be sure to reserve as much ahead of time as possible. The downstairs patio out back would be peaceful on a mild New England evening, and it is available only for walk-ins.