The Road to the 38: Oleana and Sarma in Boston

Share All sharing options for: The Road to the 38: Oleana and Sarma in Boston

It's heartening to find the flavors of Turkey and the Middle East emerging in ambitious, finer dining restaurants across America. The nutty luster of tahini, the wafts of cinnamon and earthy za'atar, vegetable salads lolling in olive oil, spiced lamb in every permutation: Their prominence in our national culinary identity is overdue.

Ana Sortun was an early ambassador for these cuisines. She studied at the famed La Varenne cooking school in France and then moved to Massachusetts, working for a Tunisian-born chef, Moncef Meddab, then running the kitchen at Casablanca restaurant in Harvard Square. In 1997, Sortun travelled to Turkey where she encountered pomegranate molasses, spice blends as brain-teasing as jigsaw puzzles, and airy pita pulled fresh from the oven. Four years later, she opened Oleana in Cambridge, celebrating these sun-dazed flavors and demonstrating how nimbly American ideas can meld with the ingredients of the "Mediterranean" (a Middle Eastern restaurant euphemism ripe for retirement).

Is Oleana still relevant 13 years later, in the age of Yotam Ottolenghi's cookbooks and fusion fattoush? I visited both Sortun's flagship as well as Sarma, the new small plates restaurant in Somerville (a couple miles northwest of Boston) where Sortun is a co-owner. 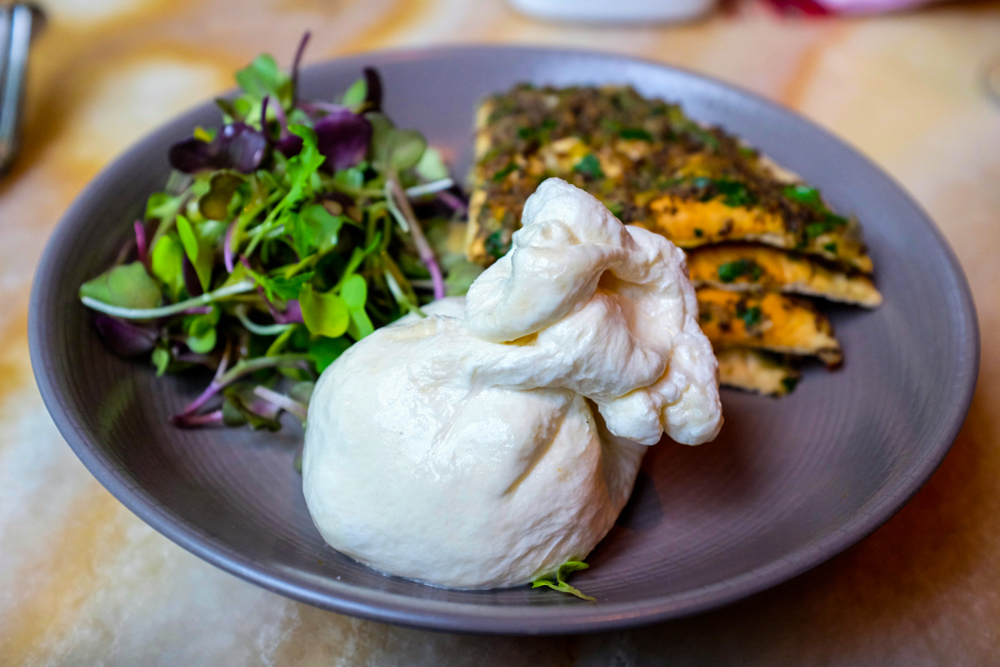 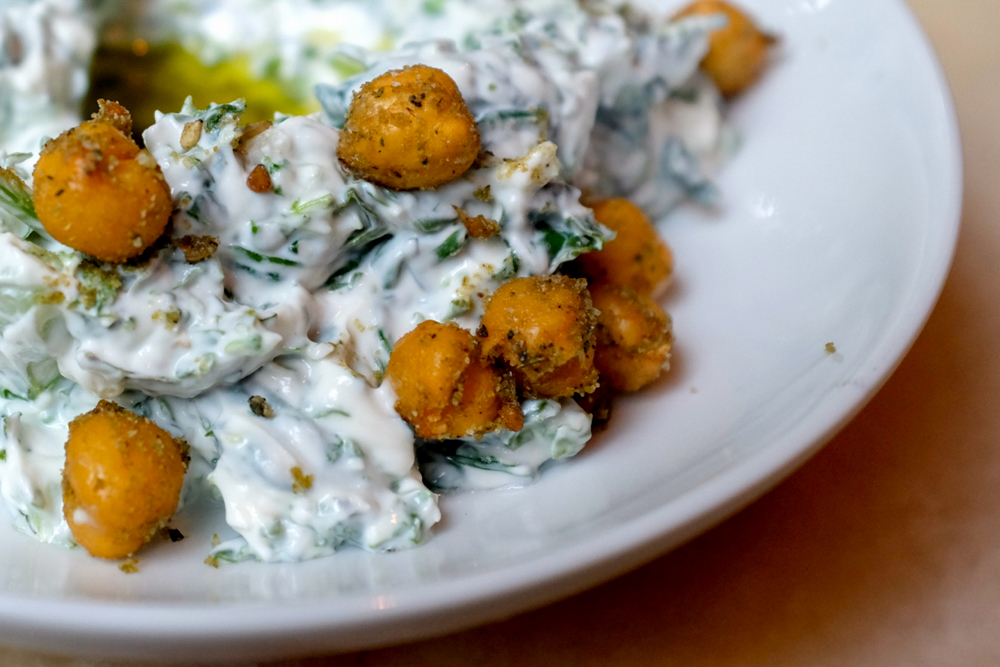 Our warm-spirited server nearly lost my attention when she began to describe burrata as a special. Let's formally designate the milky-buttery mozzarella as the molten chocolate cake of the 2010s. But then she went on: "The kitchen hollows it out and fills it with labneh flavored with za'atar and serves it with grilled pita spread with chopped morels and green garlic." Hmm. Stuffing burrata with yogurt strained to the thickness of cream cheese did sound tempting …

It was, in fact, a dairy rendezvous—a meeting at the intersection of smooth and delicate. The yogurt gave the cheese shell a tangy new angle. The lemony za'atar merged with the mushrooms and garlic on the pita, intensifying each bite in the same way that herbes de Provence adds fragrant depth to ratatouille.

The lesson: If the choices at Oleana seem overwhelming, just look for yogurt and all will be right. Cacik, a classic Turkish dip, blends labneh with spinach, mint, cucumber, and garlic. It comes in a circle, dotted with spiced chickpeas and indented in the center to hold a pool of olive oil. Orbs of spinach falafel sprawl over a magenta bed of yogurt and beet puree, so soothing against the fried garbanzo's crunch.

Yes, Oleana remains very much germane. Sortun and chef de cuisine Cara Chigazola have mastered a tricky symmetry: Their food, even when occasionally pulling from current American trends, tastes true to the lands of their inspiration. The plating is modern and pretty without detracting from the crucial interplay of flavors.

Take the chickpea terrine, an igloo-shaped mold of hummus, firmed up with pureed potato, and filled with braised greens, golden raisins, pistachios, and dried apricots. Tahini sauce is spread across the top like freeform frosting, flecks of Aleppo pepper look like bacon bits but taste tart and hot, and a shallow well at its crown contains a tablespoon of pomegranate molasses. All the elements flirt with one another. In another special, a pebbly beach of quinoa salad with date puree disappears under a tide of carrot-saffron soup poured tableside. The soup's complex sweetness offsets crisp crab croquettes floating in the center of the bowl. Ouzo aioli acts as a rich-toned backup singer to a duet of grilled broccoli and firm sfela cheese crusted with walnuts and sesame seeds.

Sortun's husband, Chris Kurth, grows the produce for the restaurant at the couple's farm: The quality shines through in dishes like a reinterpreted shawarma, with lush shreds of lamb snug in crackly phyllo with pickled turnip greens, bright and pleasantly bitter. And don't leave the cozy dining room without having dessert. Longtime pastry chef Maura Kilpatrick opened nearby Sofra Bakery with Sortun in 2008. Kilpatrick sees Oleana's thematic through-line to dreamy conclusion with creations like Turkish profiteroles filled with brown-butter cream, slicked with sesame caramel, and finished with crumbled halva and cashews.

On the side I ordered what became the meal's only off-note: A gritty, muddy cup of Turkish coffee. I much preferred sipping on a sour cherry spritzer of sorts that came with bohsalino, a rectangle of pistachio paste scattered with fresh cherries. In the sour cherry drink bobbed a popsicle made with mastic, the edible resin popular in Turkey that hints of pine. 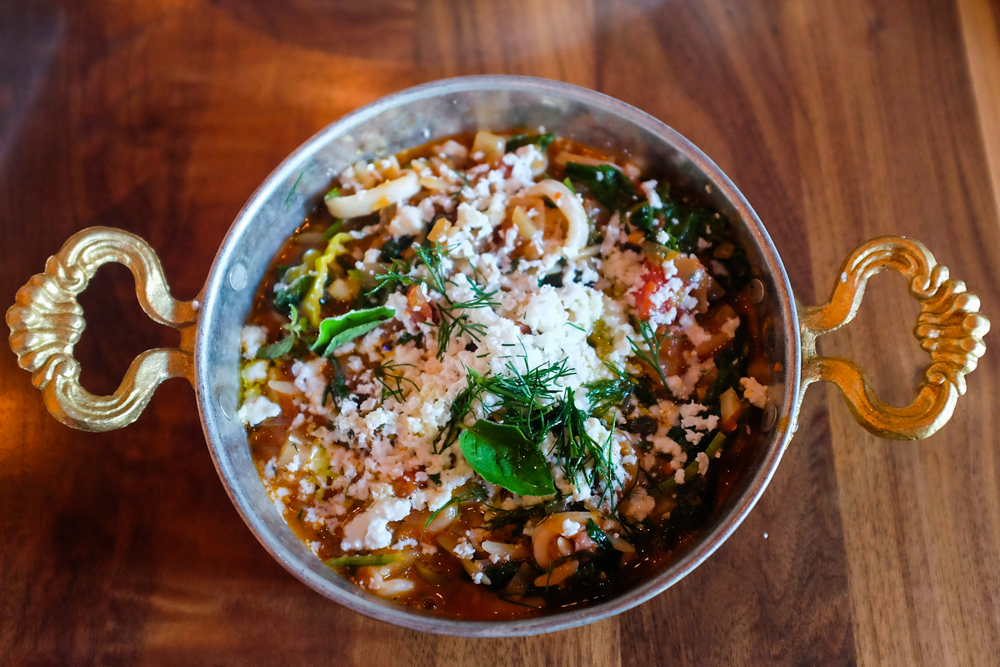 Sortun's latest project is a partnership with Cassie Piuma, Oleana's former chef de cuisine whose previous gigs include a stint at Providence's Al Forno. It opened this past September, and in a reflection of the times it's a more casual restaurant, modeled after Turkish tavernas known as meyhanes. Fittingly, a large bar with neon-green stools takes up nearly half the space. Ornate plates purchased in Istanbul line one turquoise wall, setting the scene stylishly against the dominant motif of exposed brick. The setting at bistro-like Oleana calms; the scene at Sarma rouses.

Likewise, Sarma pushes boundaries more playfully. The kitchen focuses even more squarely on small plates, broken up into categories like meze, shish (foods cooked on brochettes), savory pancakes and pies, and the namesake sarmas, or rolled and stuffed dishes. Young, engaged servers encourage diners to kick off the meal with riffs on bar snacks—perhaps dates stuffed with goat cheese and fried in sheer batter, or sesame-coated haloumi fries with white fig ketchup, the next generation's mozzarella sticks with marinara. Balls of labneh coated with za'atar harken to yesteryear's chevre balls rolled in herbs. Here, too, there are many dairy-sluiced seductions.

And after we've ordered squid saganaki (a stew heady with olives and ouzo), straightforward lamb souvlakia (threaded on a skewer and grilled), and a version of fattoush with strawberries and arugula that strayed a little too far from the original for my liking, another server approached the table. He was circulating specials from a tray, dim sum-style. First up: hunks of boneless fried chicken, with sesame, nigella seeds, and green chile enlivening the rippling crust. Fried chicken is the universal language of food. Sure, why not?

The staff parceled out the dishes evenly and thoughtfully: A meat dish would arrive with a seafood or vegetable counterpart. Aromatic cocktails, local brews, and glasses of appropriate wines like Greek Xinomavro went down easily. Ultimately, I preferred the more finessed cooking at Oleana, but both restaurants have obvious value. For residents well acquainted with Sortun's culinary dimensions, Sarma is a plucky, fresh vantage on those balmy flavors. For visitors or those new to Middle Eastern cuisines, Oleana stands strong as a local—and national—treasure.

Our review of Oleana

Cost
The focus is on Turkish/Middle Eastern meze (small plates); most are priced between $6-$13. The six or so fish and meat entrees go for $25-$27, desserts are $11-$14.
Sample dishes
Burrata with labne (a frequent special), cacik (garlicky herbed yogurt), quail kebab, broccoli and sfela cheese, Sultan's Delight (tamarind-glazed beef with smoky eggplant purree), lamb shawarma, Turkish-style profiteroles. Vegetarians have over a dozen options.
What to drink
The beverage program is beer and wine only but fashions cocktails out of sparklers and offers a list of aperitifs and sherries that buoys the food. The smart wine list, with bottles from Greece and a few from Lebanon among the more typical regions, is organized by flavor profiles. Some examples: "apricot, rose, and orange blossom" (German and Portuguese whites); "persimmon, ginger and nasturtium" (mostly Italian whites); "barberries, sumac, and hibiscus" (lighter French and Italian reds).

Our review of Sarma

Cost
Bar snacks (like haloumi fries and hot dates with goat cheese) $7-$10; most meze and other small plates $7-$16. Desserts (frozen Greek yogurt or ricotta doughnuts) are $5 plus $2 each for toppings like halva caramel and cherry-ouzo sauce.
Sample dishes
Hot dates, squid saganaki, keftedes, Moraccan fried shrimp, lamb souvlakia, frozen Greek yogurt.
What to drink
Unlike its older sibling, Sarma has a liquor license. Home in on cocktails like The Pugilist, a refreshing but complex potion of Cardamaro, Fernet, Punt e Mes, mint, and lemon.