The Road to the 38: Al Forno in Providence, RI

Share All sharing options for: The Road to the 38: Al Forno in Providence, RI

Ask what's hot in the Providence dining scene and Rhode Island food mavens will likely mention North, a 30-seat boîte run by three cooks who take cues from the Momofuku playbook of small plates and tremendous flavors. (One of them, James Mark, worked for David Chang.) Plates of country ham and fried oysters gussied with pickles share menu space with bowls of dan dan noodles and roasted chicken ramen. Inquire after the area's upscale favorite for anniversaries and the answer might be Persimmon in Bristol, a nearby seaside town. Its chef and co-owner, Champe Speidel, marries local tradition (elegant, fritter-like clam cakes poised over a lush clam chowder) with primo ingredients and modern notions (striped bass tartare, duck breast with foie gras-stuffed morels).

But the first name in Providence restaurants remains the same one that first drew national attention over thirty years ago. Johanne Killeen and George Germon opened Al Forno in 1980. They'd met at the Rhode Island School of Design, where she studied photography and he focused on sculpture and architecture. Their mutual zeal for Italian cuisines led to running a place that initially only served during the day, the idea being that they could both concentrate on their art after the lunch rush. Customer enthusiasm quickly convinced the couple (who married in 1981) to switch to dinner, and cooking has been their main form of expression since.

The building in which the restaurant resides, once a stable near the city's waterfront, is the kind of space that artists would love—quirky and boxy, with plenty of nooks and long, narrow dining rooms on two floors. Predating the current debate in food circles by decades, Al Forno has long rejected the idea of reservations. Show up early or late or there will usually be a wait. A friend and I arrived around 6:10 on a recent Wednesday and hung out for only 10 minutes before a table was ready. We briefly ducked into the upstairs bar, snug and beckoning with its backlit shelves and marble tiles. I asked a staffer for a cocktail list. "Nah, we don't have anything like that, we're a classic bar," he said. A Negroni then, please, sir. 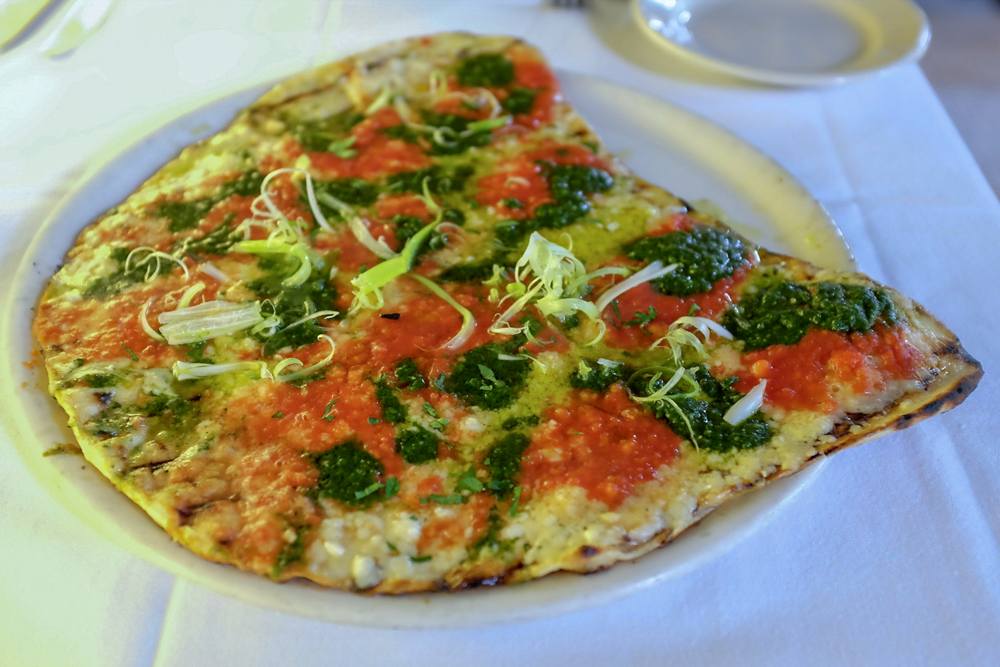 Once we sat down to eat, the first order of business was obvious: Which grilled pizza should we order? This dish, more than anything, put the restaurant on the national radar. The story goes that Germon was talking with a fish supplier who'd recently come back from Italy and was raving about the grilled pizza he'd tried in Florence. It turned out that the guy was confusing a grill with a wood-burning oven, but the idea stayed with Germon. When he and Killeen experimented with dough cooked directly on the grilling grates, they were taken with the charred pockmarks left by the flames, and the texture that seesawed between crisp and chewy.

Al Forno's pizza deserves its pedestalled status. We chose one dotted with Tuscan kale pesto, which arrived in the shape of a flattened, stretched-out boomerang. Grill marks on the crackery crust were visible through a base of fontina and pecorino cheeses, topped with pools of tomato sauce, the roughly pureed pesto, and scallions strewn like confetti. If I lived in Providence I would eat it as often as possible, vacillating between this version, a simple margherita, and perhaps a variation zapped with chile oil. I would leave the one topped with fried onion rings for the college students eating here with their parents. 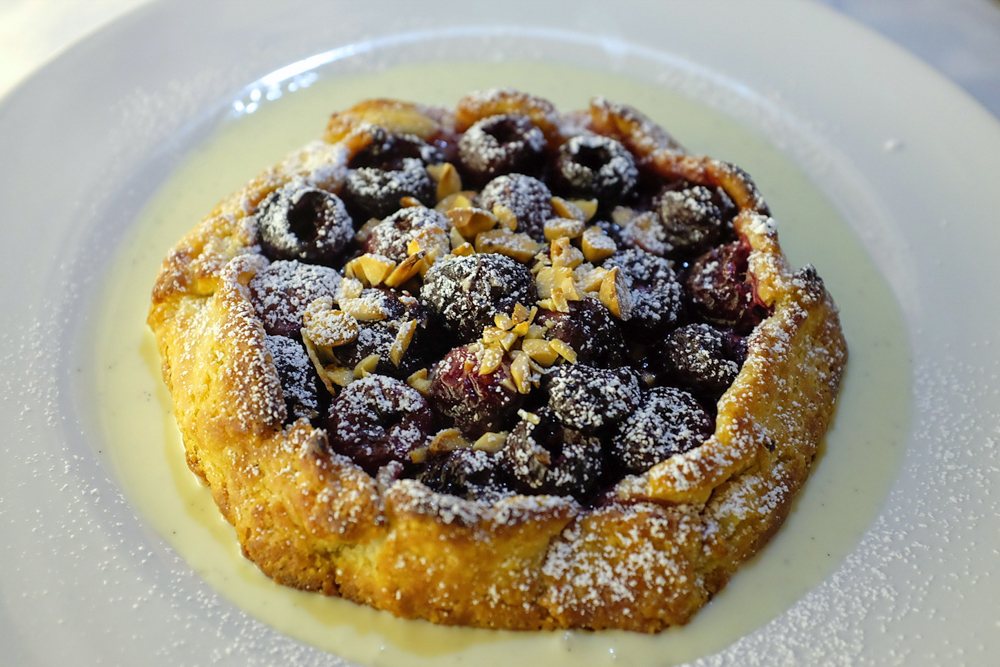 The restaurant also does something brilliant that other ambitious (non-tasting menu) restaurants should emulate: It asks diners to order desserts at the beginning of the meal, because the kitchen bakes cookies and tarts à la minute. I love this approach. It gives carefully prepared sweets their deserved respect. They become a thematic consideration rather than an afterthought. We anticipated our finale all through dinner, and were rewarded with a rustic bing cherry-almond crostata enriched with vanilla bean crème anglaise, and a bowl of dense, silky, freshly made caramel ice cream studded with candied nuts.

The beginning and the ending left the most memorable impressions, though the kitchen delivered other pleasures in between as well. Panko-crusted cod cakes came decorated with spoonfuls of smashed avocado for cool, smooth contrast, with slices of lemon tucked underneath to cut the fish's saltiness. Hot, freshly grilled croutons gave an otherwise textbook Caesar salad some pep to its personality. Clams were paired with hunks of spicy sausage, a combination with roots in the local Portuguese community. A blob of mashed potatoes, suffused with butter and heavy cream and with flecks of red skin visible, put the dish squarely in the realms of Americana comfort. 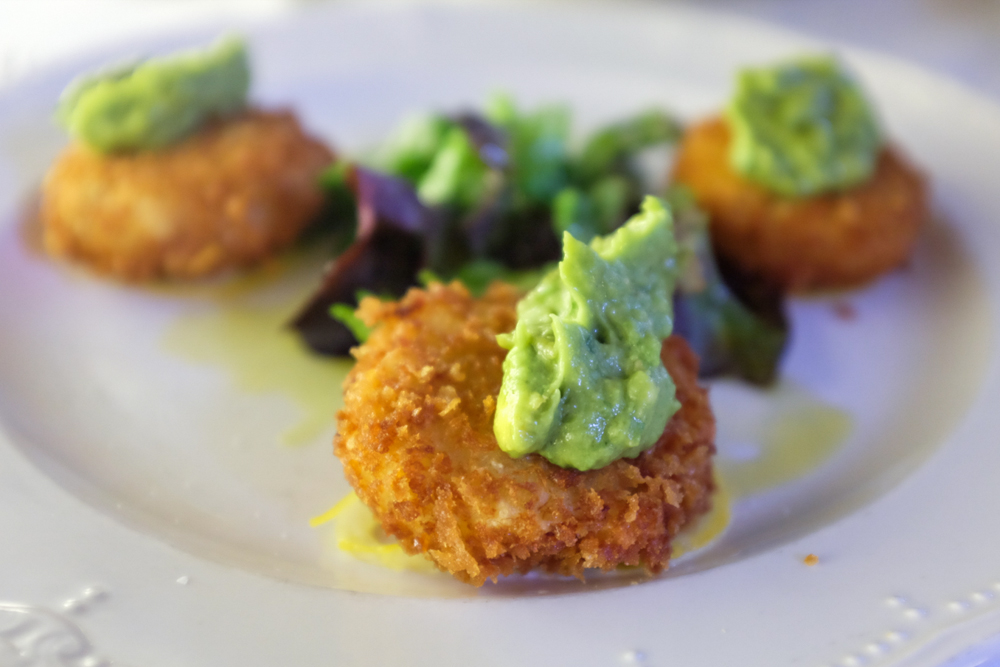 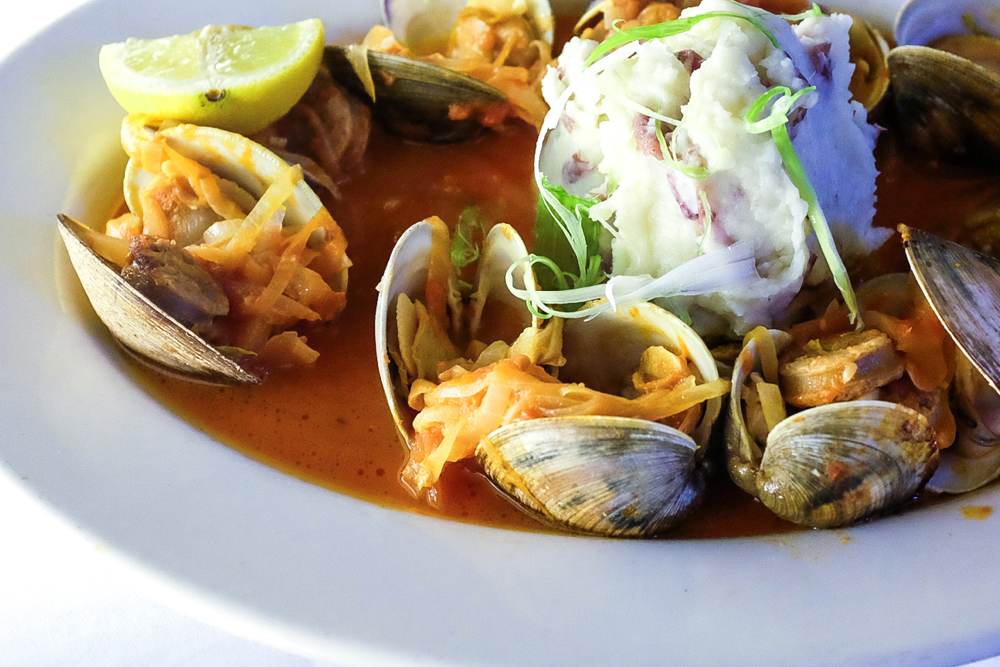 Interestingly, the most traditional Italian preparations were the least compelling. A rolled veal cutlet stuffed with Gorgonzola was endearing in an old-school-red-sauce-joint sort of way, but the meat emerged from the wood-burning oven chewy enough to tire the jaw muscles. And I'd been advised by another food writer to try a baked pasta number like shells with tomato, cream, and five cheeses. I veered and went for the free-form lasagna with meatballs; the ingredients didn't coalesce and the tomato sauce was soupy. It would certainly have been better the next day. Lesson learned: Next time I'll keep strictly to the standards that have given Al Forno its astounding and largely deserved longevity.

Our review of Al Forno

Cost
Salads and appetizers $13.95 - $24.95, pastas $23.95 - $33.95, entrees $23.95 - $34.95, desserts (large enough for sharing) $11.95 - $19.95.
Sample dishes
A grilled pizza and a rustic seasonal fruit tart are musts. Other highlights include cod cakes with smashed avocado and clam roast with sausage and mashed potatoes.
What to drink
The wine list, not surprisingly, leans heavy on the Italians. Our otherwise informed server didn't know much about wine and kept running back to the bartender to relay our questions: We finally settled on an easygoing Carmignano (Sangiovese) from Tuscany.
Bonus tip
Al Forno does not take reservations and is the city's most famous restaurant. Plan accordingly.