Now that the list of Eater Young Guns semi-finalists has been released, it's time to get to know these rising stars. Check this space for regular introductions to each of the 50 semi-finalists and tune in on June 24 to find the list of winners. 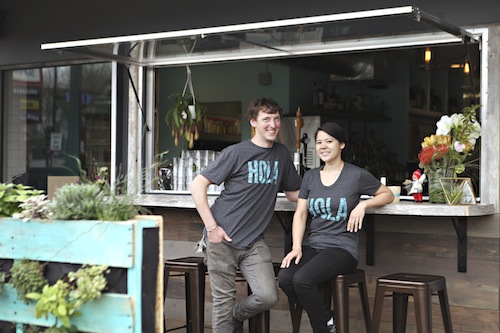 When they launched their bright turquoise food truck Hola Arepa in Minneapolis in 2011, co-owners Christina Nguyen, 30, and Birk Stefan Grudem, 28, weren't expecting lunchtime lines 50 people deep. Not only were they taking a risk in entering Minneapolis's then-nascent food truck scene, but also in introducing bold flavor combinations (and a little-known foodstuff) that were far from the city's typical midday fare. The gamble paid off. Their griddled corncakes, which ranged from classic fillings like slow-roasted pork and cotija to specials like mushroom and huitlacoche with truffled goat cheese, quickly gained a rabid following.

Nguyen and Grudem recently translated Hola Arepa's success into a 115-seat brick and mortar restaurant, where they turn out exciting dishes like shitake cachapas with huitlacoche, truffle oil, and poached egg to huge crowds every night, proving that Midwesterners have a hunger for more than just meat and potatoes.

The pair met and hit it off in 2006, when Grudem brought his screen-printed t-shirts to the local clothing store that Nguyen then owned. They came up with the idea for Hola Arepa in 2010 as a creative, but still approachable, way to bring the Latin flavors they loved to their hometown. Before launching the truck, neither of the two Young Guns semi-finalists had any kitchen experience; Nguyen had worked as a server at a Chinese restaurant and Grudem as a bartender, mixing drinks at some of Minneapolis's top cocktail destinations, including Bradstreet Crafthouse and the now-defunct Town Talk Diner.

They learned as they went, doing much of the cooking and prepping themselves and sometimes working from 6 a.m. to midnight to prep and serve a single lunch service. With the opening of their brick and mortar, they now not only run the kitchen, but also manage every aspect of their month-old restaurant, from scheduling their 35 employees to ordering to refinishing and painting the tables and chairs. And, of course, they also create the restaurant's seasonally-changing food menu (that's all Nguyen) and about half of the cocktails (Grudem's territory), both of which feature the vibrant flavors they've become known for.

Here, Nguyen and Grudem chat with Eater about introducing arepas to the Twin Cities, the appeal of casual dining, and the importance of being willing to do the dishes.

So, why arepas?
Grudem: We had tried them all around the nation, and nowhere else in Minneapolis was doing them. We thought they were a really creative and cool new vessel to serve something in, not just a taco or a burrito or a sandwich. But still very approachable and very comforting. In Venezuela, they're so common and such a staple, we thought we should bring it to the Twin Cities to showcase something new.

Nguyen: In general, we always love Latin food, especially all the vibrant flavors and the versatility of it. So we figured that the arepa would be a good vessel for not just authentic Venezuelan fillings but also all the different other Latin flavors that we wanted to incorporate into our food.

What was it like to introduce arepas to the Twin Cities?
Grudem: It's been fun. Because our truck has been around for a few years, a lot of people know our food. But now, with the restaurant, we're kind of going through that introduction again, where a lot of our customers from the truck are bringing people in who have never had our food before. For me, the people I get most excited about are the extremely meat and potatoes and burgers people who come through the door with reservations about the menu, but then they leave extremely happy.

How would you describe your approach to cooking and developing your dishes?
Nguyen: I think because of my Vietnamese background, I always try to take that approach to how to balance a dish. We always try to incorporate the savory umami, something bright and acidic, balancing sweet and salty. Pretty much hitting all of these different notes in every bite. Some of the small plates are dishes we've tried in our travels in Central or South America, and then we put our own spin on things.

How did you decide it was time to open a brick and mortar?
Grudem: There's something really special about being able to share your evening with a bunch of different people, which is why I got into the restaurant industry. A lot of regulars from the truck have been coming by. For one example, there's one guy who always orders double meat on his arepa. I've never actually exchanged names and had a conversation with him, but he came in and we were actually able to meet him and get to know him a little bit more. And that's really what I missed about the food service industry and why I really wanted to get back into front of the house.

What attracts you to casual dining instead of fine dining?
Grudem: There's less barrier between the service and the guest. It's overall more of a feeling of community, because you're going to get people who are going to dine with you twice a week or three times a week, or at least hopefully a couple times a month, versus the fine dining end of it.

Nguyen: I think as far as this being an extension of our food truck, the food truck is approachable, it's for everybody, and we wanted the restaurant to be like that, too.

You're both involved with all aspects of running the restaurant. What is that like, especially with going from the truck to a big brick and mortar?
Grudem: I've worked in some restaurants where there are general managers who spend all day in the office. And probably I could stand to be in the office a little bit more. But the places I've always enjoyed working at the most are places where everybody feels involved. It's important to me to be involved in service. Even if that's just bussing tables, or helping host, or helping food run, or helping do the dishes, it changes the morale of the staff, showing them that you're willing to do it all.

Nguyen: We do everything. We plunge the toilets.

What else do you want to accomplish in the future?
Nguyen: Obviously, since we hadn't had much cooking experience before the food truck, it's always fun to continue to learn and grow and develop a cooking style. In general, we want to keep changing our menu, we want to be able to introduce more new, exciting dishes that people haven't heard of before, and pulling things from all sorts of Latin cuisines that you wouldn't normally find in Minneapolis. Like doing feijoada from Brazil or mofongo from Puerto Rico in the winter. Right now, we're trying to do these couple things and do them well, but later we'd like to expand and explore and play around a little bit more with our cooking.

Grudem: In the immediate five-year future, probably another Hola Arepa or some other concept in the Twin Cities. We have tons of crazy ideas.
— Claire Stanford
· All 2014 Young Gun Coverage [-EN-]