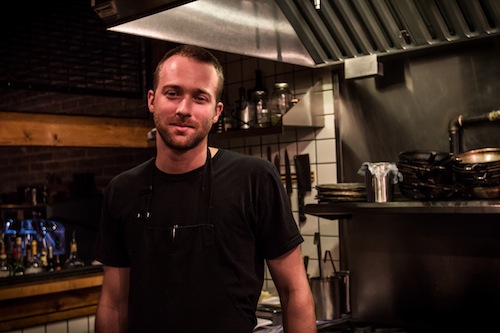 If, perchance, you show up to chat with Eater Young Gun semi-finalist Marc-Alexandre Mercier on a weekday afternoon in May at Hôtel Herman in Montreal's Mile End, it may take some time to coax the reserved 29-year-old chef from the kitchen. You may have to wait while he tends to the restaurant's backyard herb garden, fiddles with the DIY gym locker smoker, or gently ribs one of his younger charges.

Ultimately, you may have to summon the assistance of Dominic Goyet and Ariane Lacombe, Hôtel Herman's owners, to trumpet the gifts of a chef who has co-led a movement away from the punchier brand of cuisine that has put Montreal on the map over the past decade. While facile to label Mercier's food as terroir-driven, vegetable-centric fare (he is more versatile than those terms suggest), the artful, accessible plates that unfurl from his kitchen feel like a mindful salvo in the face of so much foie gras.

As Goyet explains, "He's the talent but it's like we're his managers. He's very humble and likes to keep things low key."

Low key, much like Mercier's origins in Saint-Cyrille-de-l'Islet, 200 miles outside of Montreal in Quebec's Chaudière-Appalaches region.

"We always push him," jokes Lacombe, "because when we have people who want to talk to him he's always so shy. He always stands up for what he's doing if people ask but he won't be the first to talk about it. "

"He wasn't the chef, but he was doing things perfectly, like it was his own restaurant. I was really impressed. But his reaction was always, it's not me, it's Sam [Samuel Pinard, La Salle à Manger executive chef]."

"At one point he lived just next door to La Salle à Manger and even on days off he would come in and announce 'I have an idea! I have to try something!'" remembers Goyet.

It eventually dawned on Goyet to create a platform for the chef he had worked with since Mercier's graduation from the Institut de tourisme et d'hôtellerie du Québec.

"We wanted to have something lighter and more delicate and more minimalist," says Lacombe. "And we had Marc-Alex but we didn't know what kind of kitchen he'd do. We knew he was a perfectionist, but he had never had his own kitchen."

"And coming from La Salle à Manger, I wanted to do something in reaction to it," explains Goyet. "We had hearty food."

"Exactly. I wanted something more delicate."

Enter Mercier, who was thrust into the position of chef de cuisine for the first time in his career when Hôtel Herman opened in July 2012.

"He does whatever he wants and we support him and act as his portes-parole," says Goyet.

For his part, Mercier credits early mentor Philippe Sarrail, as well as Pinard, for his start in the business and describes his style of cuisine at Hôtel Herman as part of a natural progression. His peculiar sensitivity to ingredients came, in part, from an immersion in West Coast seasonal fare at the now-defunct Fuel in Vancouver and a crash course in charcuterie in Italy. A deft use of heavy proteins as garnish and obvious devotion to wild edibles like ox-eye daisy capers and sea buckthorn berries feels like a Nordic nod to his stage with René Redzepi in 2011.

"I went to Noma and that was big," he says. "But you have to keep it in perspective. I was there six weeks and I've been cooking for 14 years? But I did learn a lot and the philosophy behind Noma; ça me touche."

Mercier's modesty is most evident when he talks about the day-to-day grind that comes with the job. When he first started as a chef, he worked 100-hour weeks, learning about organization and execution in the kitchen. It left him feeling like a zombie.

"Cooking-wise, it took me a year to get to where I thought I was on the first day," Mercier says. "At some point, you realize you can't do everything yourself and you learn how to delegate. But I try to delegate with my attitude and not by giving orders."