Share All sharing options for: KFC Says That Incident Involving 3-Year-Old Girl Was a Lie

After days of allegations and endless scrutiny from the public, KFC has concluded its investigation into the incident involving a three-year-old girl in Mississippi and reveals that there's "no evidence" that the episode occurred. The family of Victoria Wilcher claimed that they were "kicked out" of a KFC restaurant because of the child's facial scars. As CNN reports, KFC released a statement today regarding the two investigations (one was carried out internally; one was completed by a third-party company) it opened up in light of the recent allegations:

"Neither revealed any evidence that the incident occurred and we consider the investigation closed. We are honoring our commitment to make a $30,000 donation to assist with Victoria's medical bills. We hope everyone keeps Victoria in their thoughts and prayers. She will certainly be in ours."

Three-year-old Victoria Wilcher's tragically scarred face has been at the top of the news cycle for days. The girl was badly scarred in April after being attacked by a family member's pit bull. Last Monday her grandmother, Kelly Mullins, told the press that she took Victoria to KFC after a doctor's appointment, and a restaurant employee asked them to leave because "the girl's scars frightened other customers." After the story broke, the family received a staggering $30,000 in donations meant to go to Victoria's care. Doubts about the validity of the story emerged earlier today. That's when the family posted their final plea on 'Victoria's Victories,' a Facebook fan page of sorts that was taken down a few hours ago. 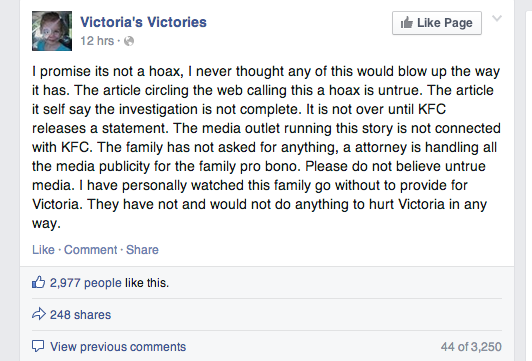 CNN also reports that the CEO of the fund-raising webpage GoFundMe, Brad Damphousse, issued the following statement regarding the funds pledged to Victoria Wilcher and her family:

"In lieu of the ongoing uncertainty surrounding the 'Victoria's Victories' online fundraising effort, GoFundMe has temporarily suspended the campaign until the full truth is made clear."