Highlights From the First-Ever Welcome Conference

Share All sharing options for: Highlights From the First-Ever Welcome Conference

Yesterday's Welcome Conference in New York City started with Jean-Georges general manager Alex Wolf carving a pineapple to the tune of "Sympathy for the Devil." Then, Will Guidara (Eleven Madison Park, The Nomad) and Anthony Rudolf (formerly of Thomas Keller Restaurant Group) welcomed guests to their all-day hospitality conference. It was the first symposium of its kind in New York or anywhere else for that matter. Throughout the course of the day, some of the big names from the restaurant universe took the stage to share their personal hospitality philosophies.

Here's a roundup of the memorable moments, and the most quotable lines: 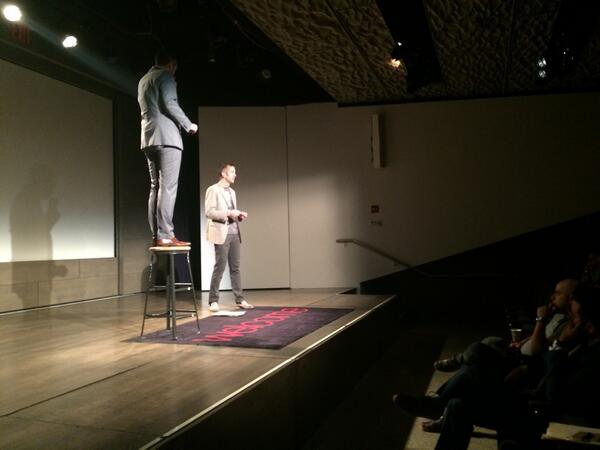 [The Canlis brothers at Welcome Conference]

After the introduction by Guidara and Rudolf, Mark and Brian Canlis, the brothers that own and operate Canlis in Seattle, took the stage. Brian mentioned the lesson he learned from his father of "seeing the dining room through the eyes of the customer." He and Mark also broke down various elements of running a restaurant into the idea of "rules versus strategy." Brian remarked: "Making profit? It's a rule, not a strategy to win. You can loose money some years — we have and we're really good at it — but you can still win the game." Mark also touched upon the mutual respect that goes hand in hand with hiring an employee:

In our company, when we interview someone, there's one question that matters: How will working at Canlis help you become who you want to become? Why would anything else matter? Because if you can't prove that to us, then if I know that you working for my company is going to help you become someone that you don't want to become, then I'm using you. I'm not here to build your resume. There's no time for that. I care who you're becoming.

Brian ended their segment by quoting the poem at the bottom of the Statue of Liberty, to rousing effect.

Rita Jammet then took the stage to share her thoughts on operating and closing the famed La Caravelle in Midtown Manhattan. One memorable quote: "Hospitality, as we were intimating before, it's intangible. You can't touch it. It's a very positive attitude, positive mind, it's a positive approach. It doesn't cost you much, and yet you can have a huge impact with it."

Simon King, the Group Front of House Operations Manager for The Fat Duck, talked about the challenges of integrating technology into the hospitality world. He explained that The Fat Duck had to switch from phone reservations to an online system, but something got lost in the process: "It's one way of overcoming a bit of a challenge, but what happens is that, you do lose that human interaction. It's about people. We're about people — this industry is about people." His team has taken a number of steps to make the rest of the experience more interactive and engaging to the diner.

Gabe Stulman, of New York's Little Wisco group, gave a very inspiring speech about how he created his small empire of neighborhood restaurants. Stulman developed his style of service by thinking about how he felt as a server in his younger days at a restaurant in Tribeca, and how he had to throw on a uniform at the beginning of his shift: "I started to take off my layers of individuality and I started to put on my all-black outfit and I felt this thing happened — it was like part of my identity was being peeled away." He created a restaurant group where his employees feel comfortable and excited about the restaurant that they work for. Stulman also revealed one of his company's unusual policies: "Every night you have to pick one person in the dining room that you've never met before and give them something on the house…If we make this special and we make this fun, we're going to be a neighborhood restaurant." 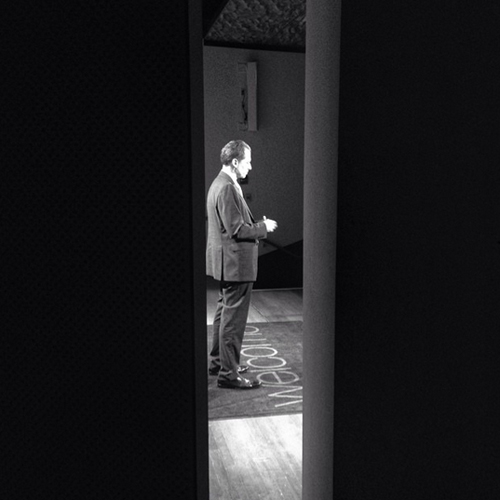 At the start of session two, former La Grenouille maitre d' Charles Masson talked about the keys of a good restaurant, which are food, service ("the mortar that holds the stones together"), decor, and ambiance. Mr. Masson noted that for people who care about hospitality "the obstacles are just not there. If it's bad, you're going to fix it" no matter the cost. He also talked at length about how understanding flowers and gardening can be a key to understanding the seasons and the food of his restaurant. Mr. Masson also touched upon the importance of discretion, especially when it comes to powerful rivals wanting to dine at the same time in his dining room. The restaurateur also offered a quote from a longtime regular: "You throw money out the windows, and it comes back through the door.' That's the generosity of service."

Will Guidara (Eleven Madison Park and The Nomad) spoke about how his mother's life and death — she had brain cancer and was a quadriplegic for most of his childhood — taught him the importance of being present and emotional: "Know how good it feels to be fully present with the person you're with and how good it feels to have a person be fully present with you... the importance of being vulnerable, of being emotional, and being raw with the person you're with."

Jeff Katz (Del Posto) talked about how to carefully choose and treat your work family. "Treat the restaurant family like your real family and stick it out," he remarked. His advice was also geared to those just starting out: "If your resume has six jobs in five years, you have to ask what's the problem." And he also geared his speech to managers and GMs: "As a GM it's your job to defend the jobs of those who work for you against those who would jeopardize those jobs...You're a boss, act like it, be in charge."

Randy Garutti (Shake Shack) was the star of the second session. His talk was at once funny, inspiring, and engaging. He opened with a story about how Will Guidara goaded him into talking to his wife for the first time. He brought a video and slides, and he told jokes. Randy stressed that Shake Shack is trying to change the concept of fast food. He specifically zeroed in on the idea that a fast food restaurant can be a community gathering center, can have food made from great ingredients, can include incredible architecture and input from the community, and can offer high wage jobs. "We win by doing everything everyone else is unwilling or unable to do," Garutti remarked. He also quoted Maya Angelou: "I've learned that people will forget what you said, people will forget what you did, but people will never forget how you made them feel."
And, as a special treat, Randy showed Danny Meyer's first notebook sketch of the Shake Shack ideas. Other potential names were Frosty Shake and Custard's First Stand.

· All Coverage of Welcome Conference [~ENY~]