Colin Anderson of Pittsburgh's Cure on Historic Cocktails and $40 Martinis

Share All sharing options for: Colin Anderson of Pittsburgh's Cure on Historic Cocktails and $40 Martinis

This is the Barkeepers, a feature in which Eater meets the fine ladies and gentlemen behind the bar at some of the world's hottest cocktail parlors. 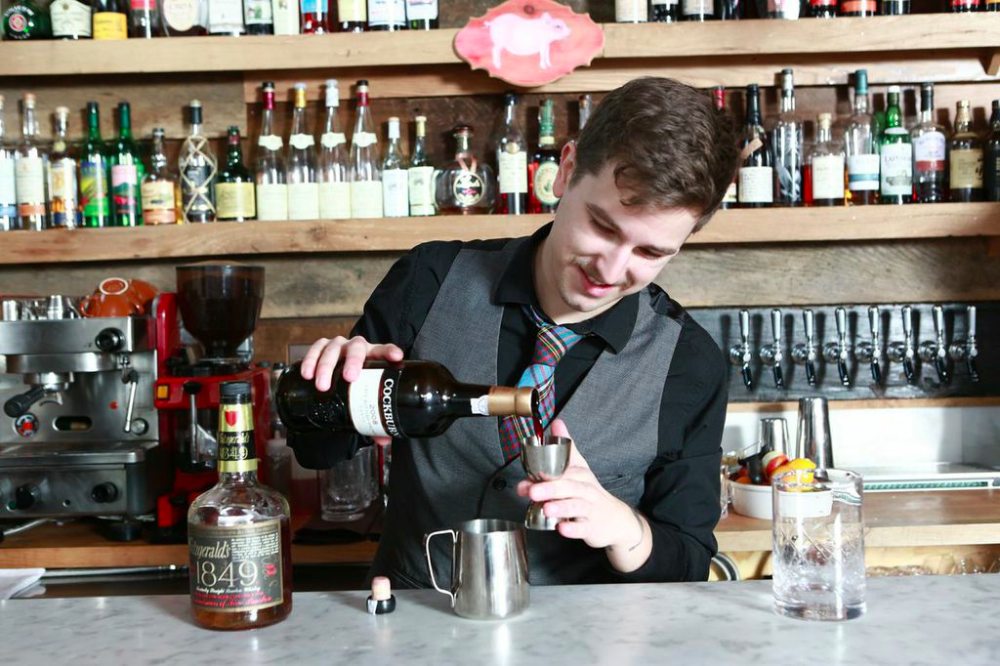 When acclaimed chef Justin Severino opened his Pittsburgh restaurant Cure in late 2011, guests had to pair his progressive charcuterie plates (featuring duck speck and lamb pepperoni) with whatever beer or wine they could grab at the liquor store: The restaurant was BYOB. But after a few months, Severino decided to build the popular restaurant a proper bar, bringing in Colin Anderson to craft a cocktail menu with a similar playfulness: Anderson's approach to drinks borrows from old-school ingredients like sherbet powder and siphoned seltzer, but experiments with more modern techniques.

The bar revamp ultimately took six months thanks to issues with securing a liquor license, but since May 2013, Anderson's been manning the tiny (four-seat) bar, re-creating traditional, historically accurate flavors. "I'm a purist," Anderson says of his drink recipes. "There's no revision in anything I do." Eater recently talked with Anderson about the difficulties starting a bar program at an established restaurant, why Pittsburgh seltzer is among the best in the country, and how a $40 martini ended up on the Cure menu.

What was it like starting a bar program for a restaurant that was already pretty well-known?
It was really difficult at first because the servers had their whole [system] figured out. And I came in and just sort of blew up their thing. It became: "Now, there's a whole 'nother set of things that we need to learn." For the first two months, I was twiddling my thumbs [because of the liquor license delay]: I was doing stuff and no one had any idea what was going on. Justin built that bar six months before the license came. People were staring at it, like, "Hold on, we can't buy any booze? You don't have a license, but the bar is there?" At first, it was really difficult. I was just running around every single day because I knew what I wanted to do, but it wasn't until about six months ago that I was like, "I did it. I did what I wanted to do." It took me well over half a year to take it to that point. I was just playing catch up the whole time.

You're known for having what's been called a "historical" approach to cocktails. How do you think history emerges in your drinks?

I love not only the story behind the drinks, but how accurate I can be to the original.

I think a lot of people focus on Prohibition-era drinks. There's some books that I read a lot: Most of them written by Americans who were escaping Prohibition by going to Paris or London and working in cocktail bars. So, they're bringing us this progressive, American focus to a scene that isn't adulterated at all: They've already accumulated their own ideas, proportions, and things like that, using a lot of cool ingredients you're not able to get in the United States. I read a lot of those books.

We're all reading Jerry Thomas and trying to figure out what the hell a "pony" is, or a "wine glass of whiskey." And then, some of the more specific early books: One that's really important to me is Cooling Cups and Dainty Drinks, where they're talking about the idea of a "cup" and "What is a cup?" It's a wine-based drink with seltzer water, cooling herbs, and all this other stuff; some of the earliest drink recipes were published there. History's awesome, and I love not only the story behind the drinks, but how accurate I can be to the original. 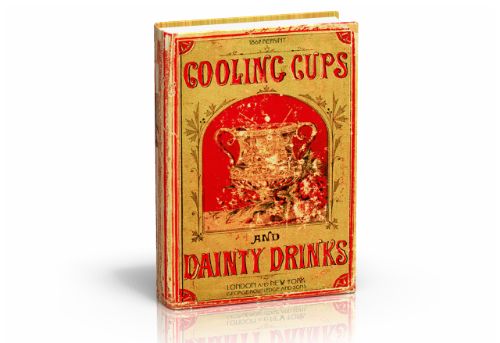 So how do you reconcile the idea of being "historically accurate" with Cure's more progressive or playful elements?
In a lot of instances, I'm reading about recipes or ingredients that aren't made any longer, or are impossible to find, so a lot of it is re-creation. I have access to all these fancy tools — like a Cryovac and a dehydrator — so a lot of times, we're making an old ingredient in a way that's going to make sense [for us now]. Before I worked in a place where I had all these fancy tools, I was taking grain alcohol and soaking fruit or whatever ingredient I'm trying to make in a mason jar for a month. [Laughs] Now, I just do it in one day.

You can learn what works and what doesn't work in a matter of hours.

Creme de Noyaux is an example of something that we make [using new technology]. The recipes call for — and you're not finding any recipes for this past the 1920s — almonds and apricot pits. So last year, when we got apricots in the kitchen, I took all the pits, roasted them, pulverized them, and soaked them in grain alcohol. The way that do that is not some ancient process that's going to take us a month or two months to do. It's just like: Cryovac, grain alcohol. It makes it so that you can progress very quickly, and you can learn what works and what doesn't work in a matter of hours.

Do you have a favorite drink to make?
Yeah, I keep talking about it lately, but I do like the cup. It's a classic drink because it uses sherbet powder, which is an English thing, originally... it's baking soda with sugar and citric acid, maybe cream of tartar, and then some sort of fruit flavoring. In Cooling Cups and Dainty Drinks, they talk about it being an important part of the cup; the way that translates to me is that it's intended to give the drink a foamy heady quality... As soon as the sherbet hits the liquid, it starts to bubble. And it'll bubble for 10 minutes. You'll just sit there and have this weird powdery head on top of it.

I build a lot of my drinks at Cure because we use really good seltzer water. We have old-school siphons. There's a company called Pittsburgh Seltzer Works: They have this seltzer-making machine that was built around the turn of the 20th century. It breaks all the time: Sometimes, we don't get it; like last week, we just couldn't get any. But I can build this cup because as soon as I hit it with the soda siphon, it shoots so harshly and so quickly that it mixes the drink together. And the bubbles of the seltzer are so big and bright that dilution is different. It's very cool. 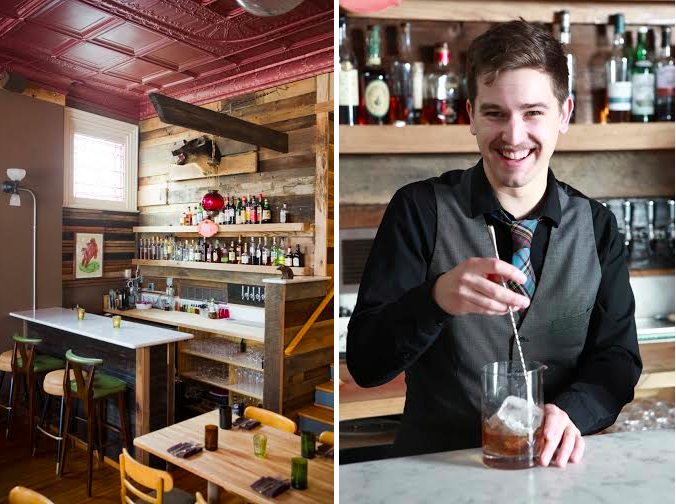 What's the guest reaction if you put this crazy bubbling drink in front of them?
Almost always they're like, "What the hell did you just do?" Then, I have to explain to them that this is an ancient practice and, to my knowledge, it's as accurate as we can possibly get it.

Is there an appreciation for that?
Yeah, definitely. I think so. To some extent, a lot of what I do is lost because I'm not doing it in front of a large group of people that are all staring at me. It's not like the focus is on the bar, which is great as far as I'm concerned. Sometimes, people sit down at my bar because there's nowhere else to sit: It's the last seat in the house, we're full every night at seven thirty. Sometimes, I get people that really don't want to be there. They don't care what I'm doing. It's about adjusting the way you're doing things or reacting to people: Sometimes [given the reputation of the bar], people come sit there and stare at me [and say]: "Make me everything."

I wanted to ask you about the $40 martini on the menu. How did the idea for this high roller drink come about?

"How can we can preserve this? Let's put it into alcohol."

This is the chef's idea, 100 percent. I have to give 100 percent credit to him for this. Our friends who are foragers and have a little farm stand down the street have these Appalachian Perigord truffles. We usually get a certain amount of them, and Justin had exhausted what he was doing with them: He was like, "How can we can preserve this? Let's put it into alcohol." Initially the idea came about with a conversation that Justin and I had in the very beginning about how his father made dirty martinis. He was like, "I hate them. I think they're disgusting." I was like, "Me too. I don't want to have anything to do with making dirty martinis." And he was like, "All right then. Let's figure out a way that we can clarify umami, clarify earthy flavors into a cocktail."

The first time we ever really did it was about this time last year. We infused ramps into gin, so we used gin to make a traditional martini: two parts ramp gin, one part dry morel mushroom-infused vermouth, and then we made bitters of celery root. It was really fun. And we've re-created it a whole bunch of times; I have probably six bottles of ramp gin sitting there. That's where the idea originally came from. So with 70 grams of truffle leftovers, we literally just micro-planed mushrooms into vodka.

How often do people order that cocktail?
Not often. [Laughs] It's most certainly the least ordered cocktail on the menu. I'd say we make one a week. But sometimes, people come in like, "I want to ball out." Also, it's fun to give to our friends. Justin really likes to do that: "Hey, my friend's here, and he's going to get a large salumi and also a $40 martini." It's great.

Finally, what's your must-have bartender tool?
I love to talk to people. I love their stories. I actually like my job: It's like an impact study of sociology. That sort of drives me in a way. I love observing, and [not just] being able to observe, but having the ability to have conversations with people about food, about drink, or about life in general.