The Road to the 38: Minibar in Washington DC

Share All sharing options for: The Road to the 38: Minibar in Washington DC

As six of us, the evening's first klatch of diners at Minibar, filed in from a waiting lounge to the main dining room, executive sous chef Johnny Spero stood behind the pale oak counter where we took our seats. He was making us a welcome cocktail, a hot and cold iteration of the pisco sour. The first step for the drink: a sorbet made from pisco and lime syrup, frozen in seconds by a modernist cook's handiest chemical element, liquid nitrogen. The freezing mist rolled out of a canister, as thick as fog on a summer afternoon in San Francisco. For a moment the vapors completely engulfed Spero — we could only see his short-sleeved arm continuing to whip the mixture. The drink turned out smashingly—warmed egg white foam melted the sorbet to make it drinkable—and the bit of spectacle relaxed the crowd. The next few hours would be anything but stuffy. 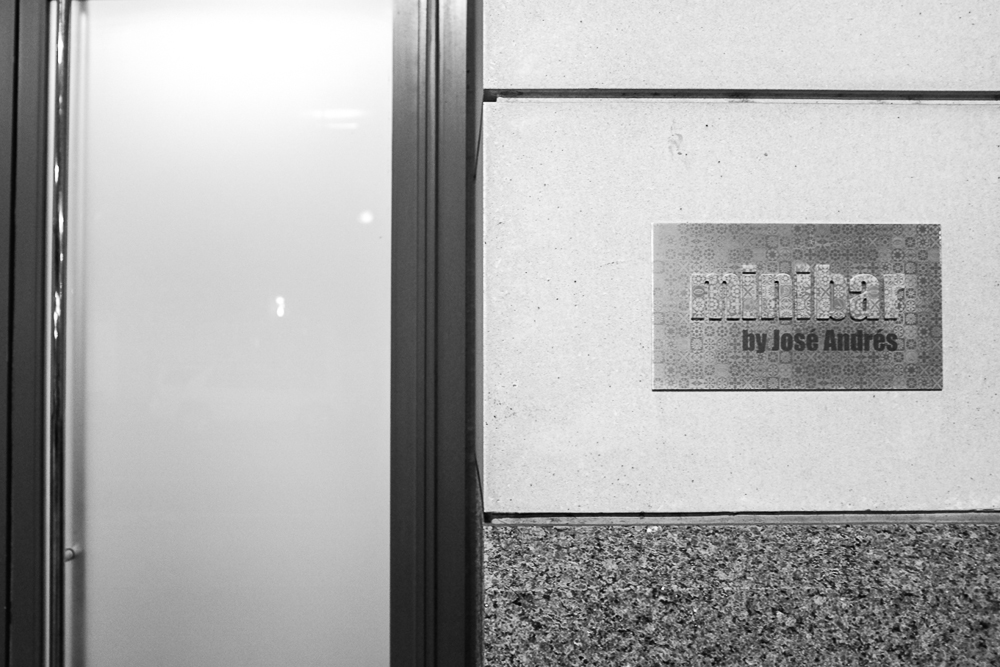 Comparing Minibar, José Andrés's 12-seat restaurant in D.C.'s bustling Penn Quarter, to a theatrical experience is unavoidable. The two counters that comprise the dining area angle toward an open kitchen area; diners are also the studio audience. But it doesn't feel so much like The Chew as much as it does a culinary Cirque du Soleil blended with the heady themes of a Sondheim musical—pageantry, but also cooking as wry social commentary. You can spend the night absorbed in the tasks of the kitchen's many cooks, who are always twiddling with pans and tweezers and gizmos. A seductive waft of ham-scented broth may drift from stage right while you're absorbed in a plate of white gazpacho solidified into cubes that resemble tofu. And if you're so inclined, the meal can prod rumination: If familiar dishes are deconstructed and reassembled into something both recognizable and foreign, does it push the eater deeper into a comfort zone or alienate them altogether? 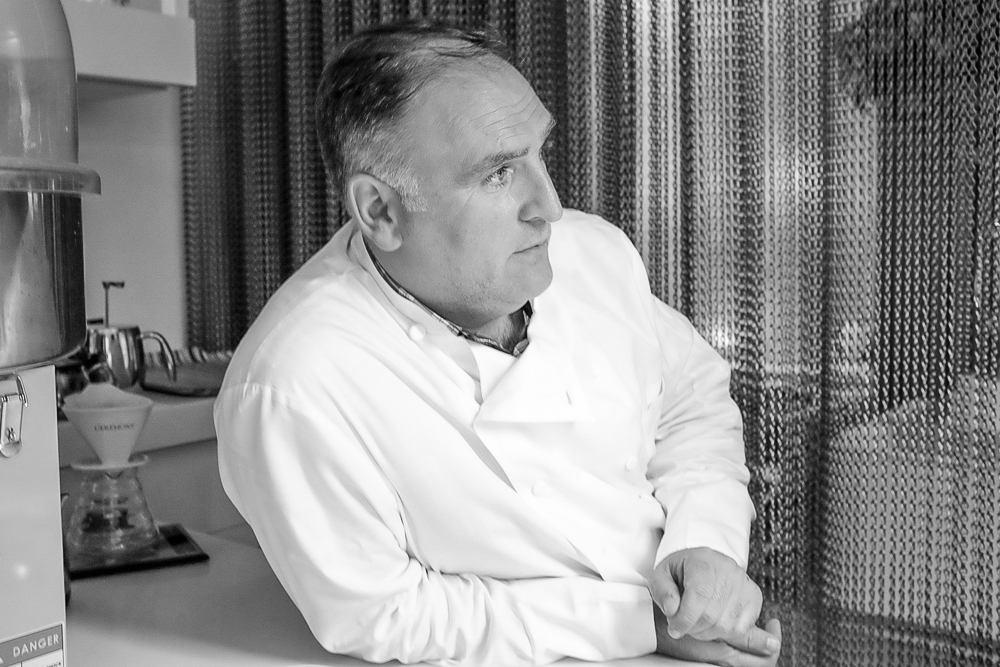 Questions like that, of course, have been at the heart of this kind of cuisine since the late 1990s, before the term "molecular gastronomy" was banned by the cooks who practice it. Andrés helped usher D.C.'s dining scene into the new millennium with stellar small plates restaurants like Spanish-inspired Jaleo and Mediterranean-themed Zaytinya. The first six-seat incarnation of Minibar opened in 2003 in Andrés's now-closed Cafe Atlantico. Conceits like lobster emulsion served in a plastic syringe and mango soup sprinkled with Pop Rocks stemmed from Andrés's tutelage under El Bulli's Ferran Adrià. The early experimentations paved the way for Andrés's restaurant Bazaar, with locations in Los Angeles and Miami, and é by José Andrés, a six-seat tasting menu room that's part of the Jaleo in Las Vegas's Cosmopolitan hotel.

In the beginning Minibar charged $65 per person; today it costs $250 before beverages. I gather from what I've read recently and over the years, though, that I caught the restaurant in its most masterful phase yet. Yes, there were plenty of trompe l'oeil small bites and lab-rat remakes of iconic foods from around the globe. But the progression of 25 or so dishes also had enough substance that I left sated, not merely amused or provoked. 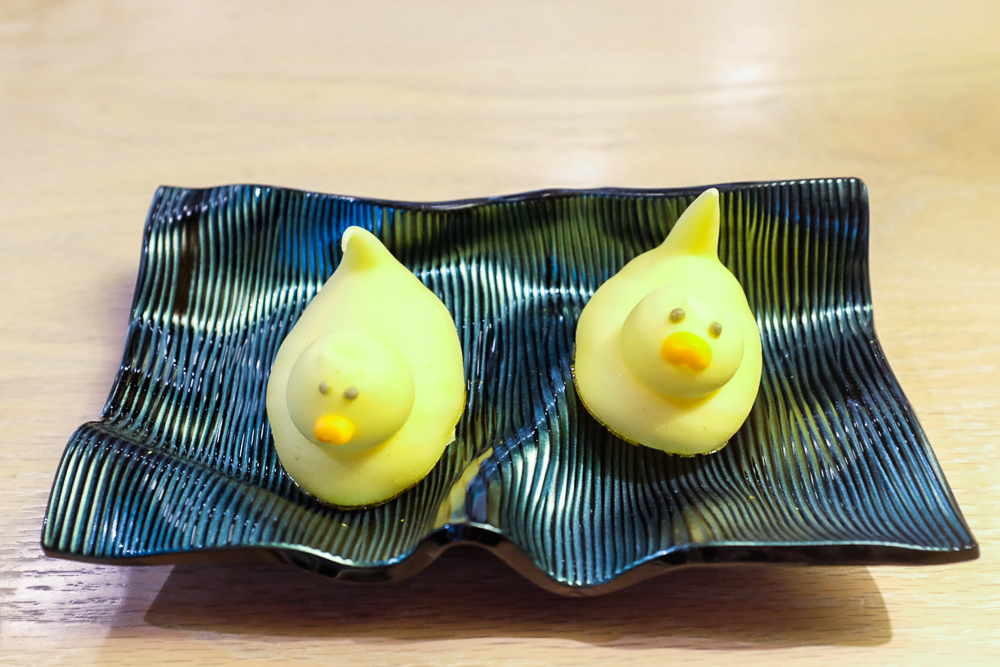 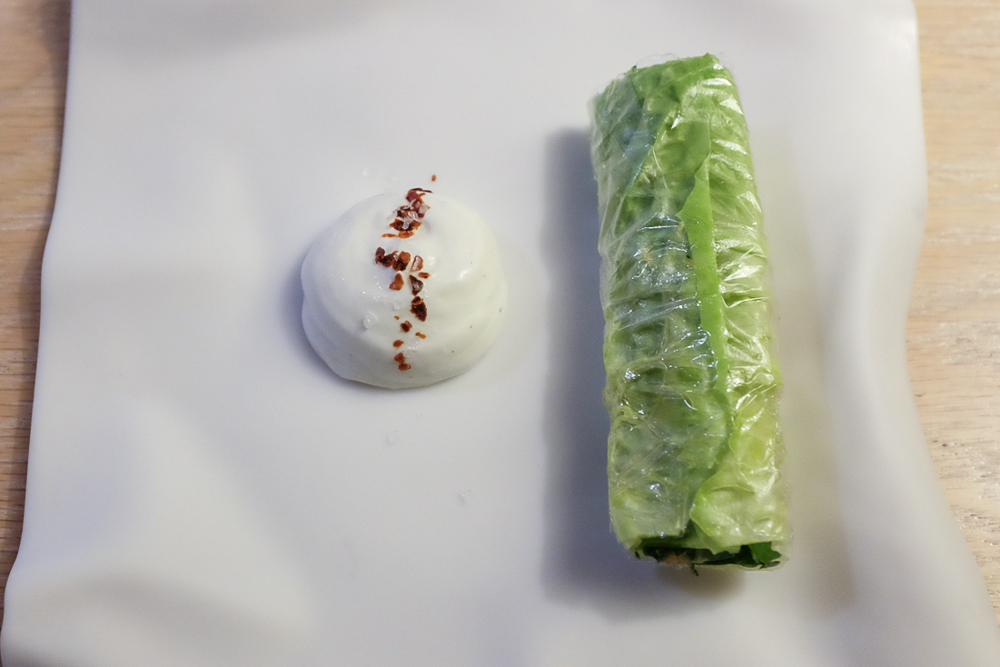 Befitting the performance atmosphere, the menu is divided into three implied acts. First came the warm-up of sharp flavors. It started in the front-room lounge, with edible flowers pressed into oblate—transparent potato starch paper from Japan—and brushed with St. Germaine liqueur, rosewater, and fennel pollen. They came tucked inside a guidebook for wild flowers. Cute. Once inside, several tidbits arrived while we sipped our pisco sour: a savory twist on canelé pastries made with Parmesan, pineapple shortbread presented in a tin cookie box, a slice of "pizza" made with the oblate paper, and a frozen cup of blitzed Marcona almonds and cream containing whipped queso de Valdeón and passion fruit reduction. The "dessert" of this group: an apple-scented meringue in the shape of a rubber ducky filled with sultry foie gras ice cream. The chain of dishes even wrapped up with its own late-night snack, a riff on chicken shawarma swathed in oblate with crackly chicken skin, herbs like mint and cilantro, and a dollop of Greek yogurt alongside dusted with Aleppo pepper. 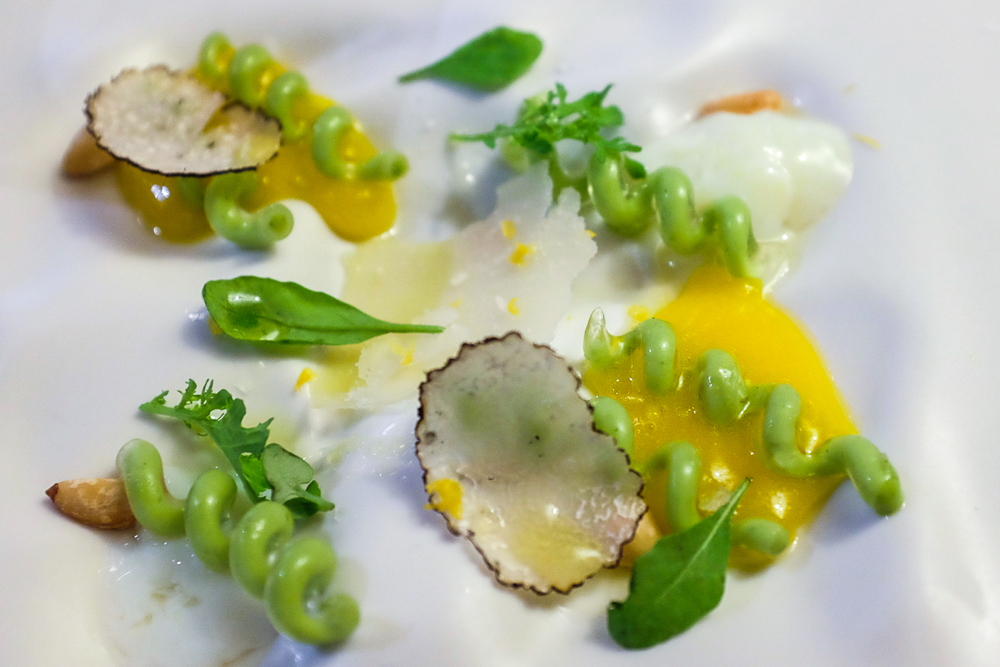 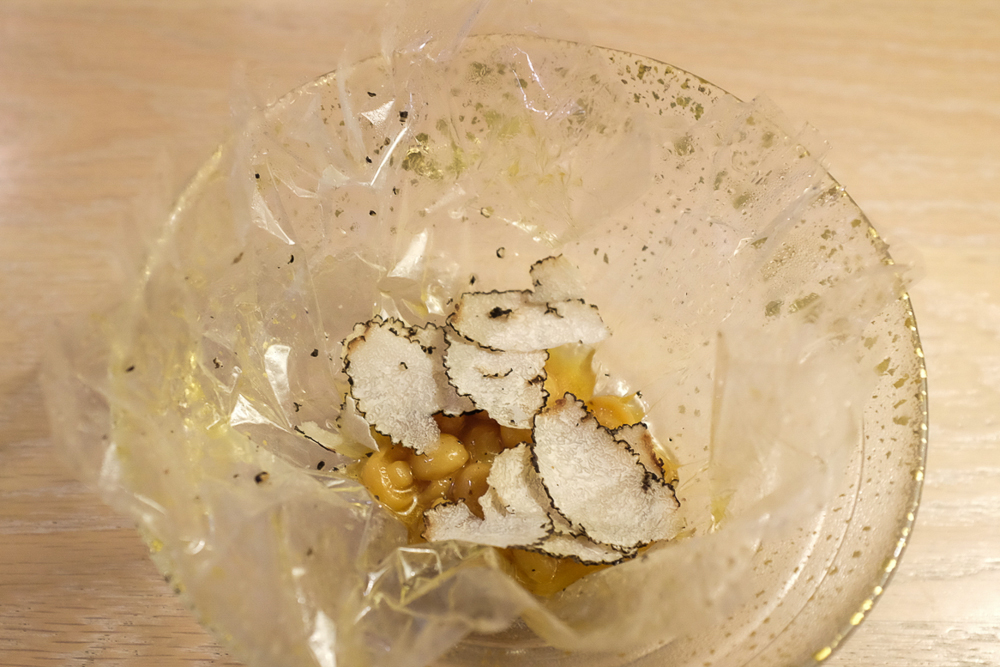 Reset for act two, the heftier plates. This sequence limbered up with an ode to Vietnamese street food—a pig's ear, fried chicharrón-style, into a puffy cup holding pork shoulder braised in curry with pickled vegetables, Thai basil, and a dropper of chile oil on the side so we could add our own level of heat. No tricks, just a handful of potent flavors. The technical alchemy showed up most overtly a couple of dishes later with pesto fusilli. The pasta was made from water and gellan gum: Cooks dipped cold corkscrews into the mixture, which formed hollow "noodles" that were injected with extra-pureed pesto. I don't always go in for these shenanigans, but the faux-fusilli was satisfyingly al-dente and the pesto flavor more intense and direct than the traditional method. 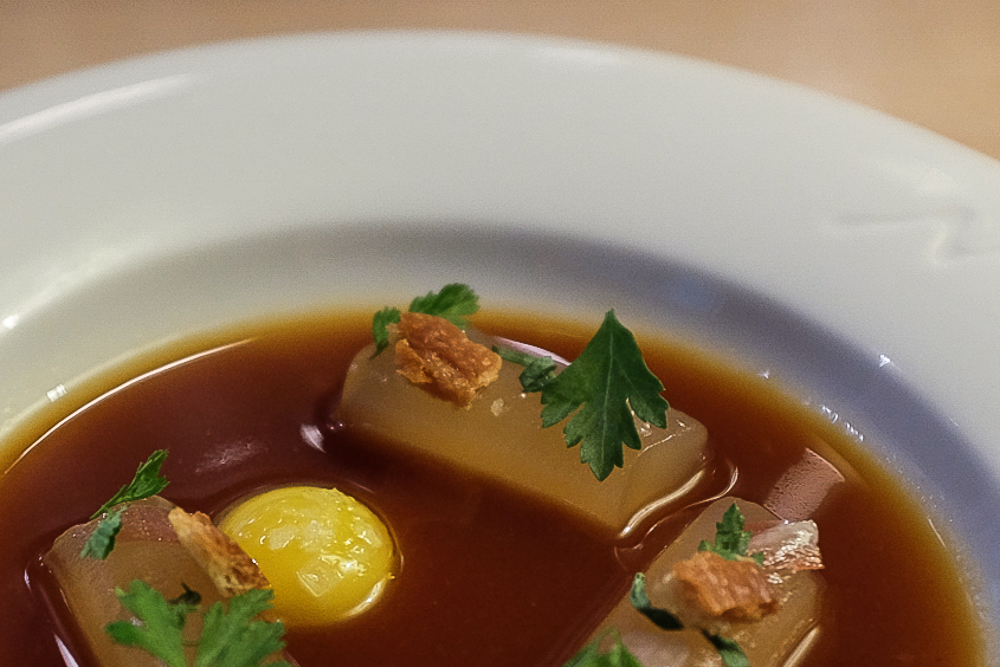 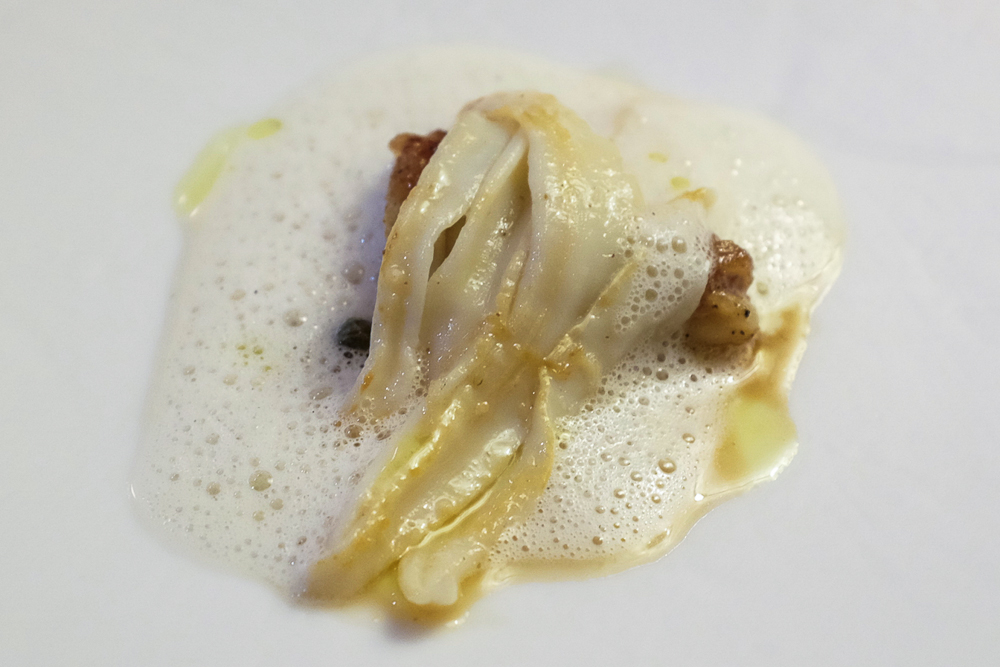 I was similarly hooked by a dish called "Ibérico tendon," where noodles fashioned from Ibérico ham consommé and Japanse kuzu root mimicked the translucent chewiness of beef ligament. It steeped in a fragrant caramelized onion broth given body by raw quail egg yolk. And I was astonished in a different way by the next course: espardenyes, or sea cucumber—which I officially proclaim as the "it" echinoderm among the country's fine dining chefs. I also ate the creature recently at Saison and Benu. Spero said the team that develops the Minibar recipes (which includes Andrés, Spero, and Ruben Garcia, director of research and development) was fascinated by the texture and decided to serve it, draped with bone marrow, well into the meal after trust had been established with the guests. Searing the sea cucumber on a plancha helped assuage its gelatinous chew. 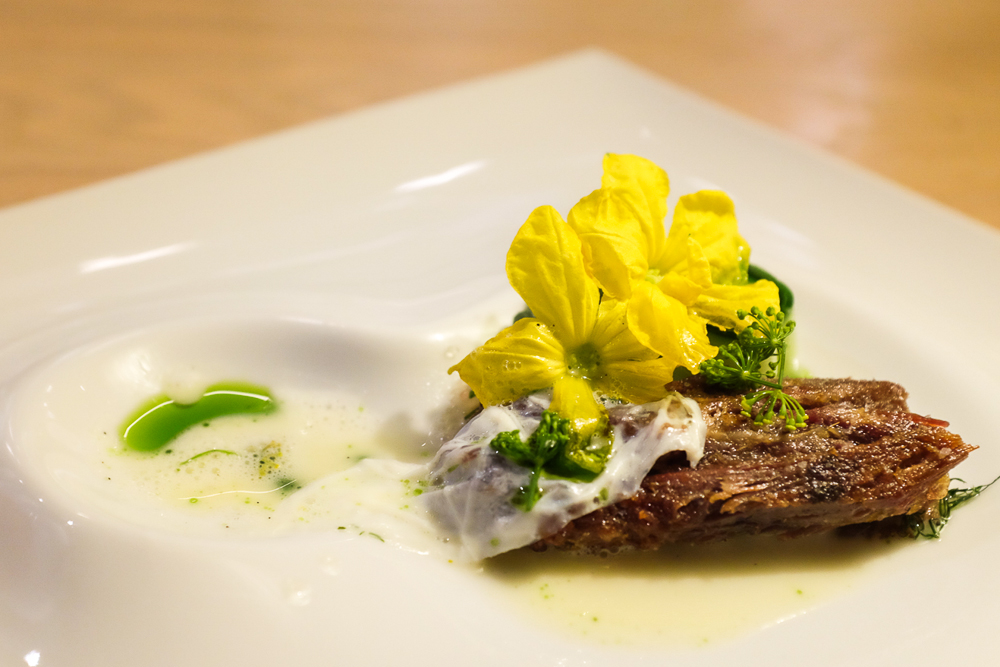 Lamb shoulder with whey and dill

Spero staged at Noma and worked at D.C.'s Komi, and his experience with Danish and Greek cooking merged in the night's most generous dish, lamb shoulder seasoned simply with whey and dill. A take on After Eight dinner mints, a disc with a liquid chocolate center, closed this portion of the dinner. 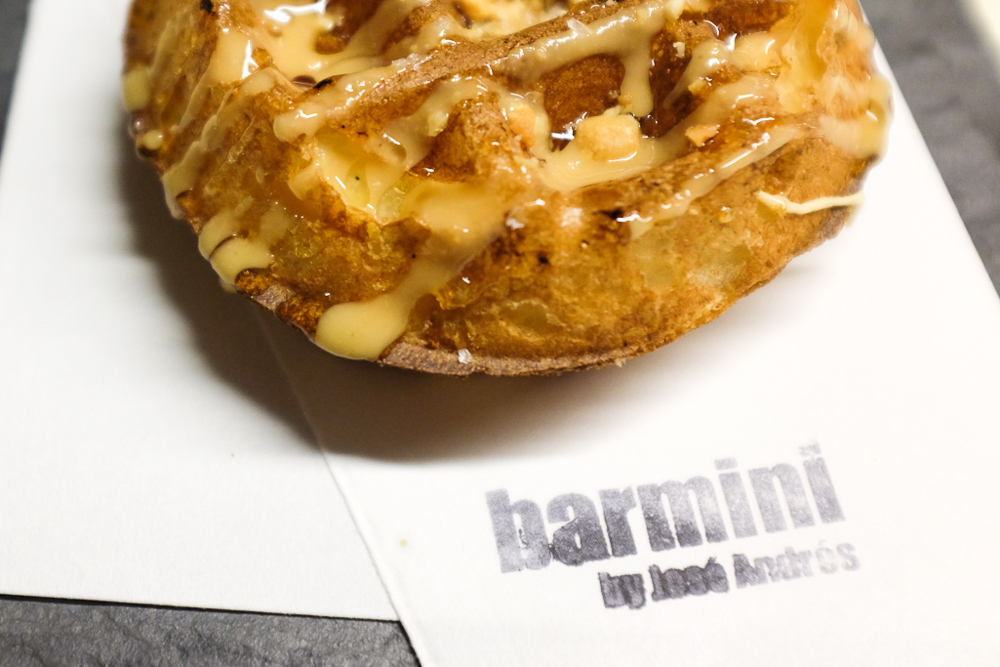 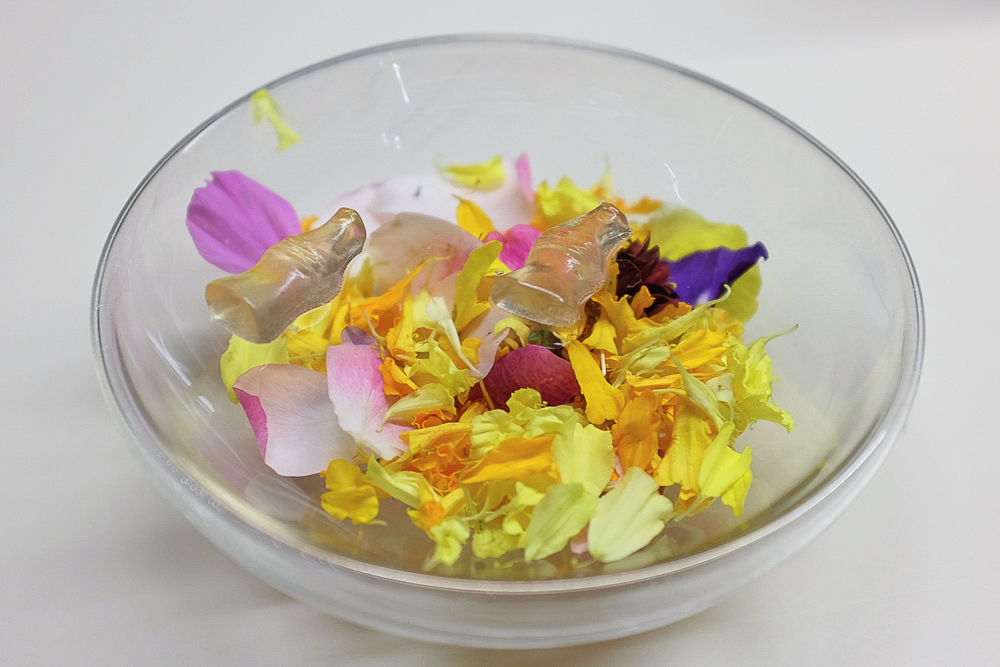 Then we were whisked into spunky Barmini next door for act three—a series of sweets, including the restaurant's version of chocolate dipped Pocky sticks, saffron pâte de fruit, a coconut bon bon encasing raspberry puree and freshly grated wasabi, and a chocolate "doughnut" filled with Krispy Kreme ice cream. The evening whizzed by, and the meal's breadth impressed: the zigzag between European, Asian, and American flavors, and the balance between modernist and straightforward preparations. Andrés was in town and stopped by to chat with guests before they departed. The night ended as it began—with edible flowers. These came in a bowl encased in plastic wrap, upon which sat two gummy candies shaped like bottles and flavored with aged Japanese whiskey. A fitting nightcap. Curtain down.

Our review of Minibar by José Andrés

Cost
The price for Minibar's set menu is $250 per person.
Sample dishes
Several hours of theatrical dining, which includes three settings—the main one being a comfortable counter seat in the kitchen, where chefs prepare many of the 25 or so small courses in front of you.
What to drink
Most guests opt for a beverage pairing. The restaurant offers four: well-conceived non-alcoholic options ($55), including drinks like chamomile and hibiscus tisane with orange blossom water; "Experience," a traditional wine pairing with the occasional cocktail or glass of sake ($75); "Celebration," a favorite that focuses on bubbly (including Okunomatsu, a sparkling sake) for $125; and the $200 "José's Selections," which breaks out upgrades like Chateau Musar's 2012 rosé and the sherry-like 2008 Domaine de Montbourgeau "l'Etoile Cuvee Speciale" from France's Jura region.
Bonus tip
Scoring a reservation is no easy task. Minibar has two staggered seatings—6/6:30 p.m. and 8:30/9 p.m.—Tuesday through Saturdays, for a total of 24 seats per night. Also, the restaurant opens slots by season: For example, on June 1 it began booking for the summer season, July through September (though note: the restaurant closes for its annual research and design development break August 10-September 4.) Reservations for the fall will be accepted starting September 1. And there is no calendar on the website to consult for openings. Email the restaurant your request, and a staffer responds with options (if there are any). There are waitlists; openings occasionally happen. One less stressful consolation prize is Barmini, the next door cocktail lounge with a Barcelona vibe and a frequently revolving menu of clever bar snacks. It's fairly easy to snag a last-minute reservation for Barmini, particularly during the week.