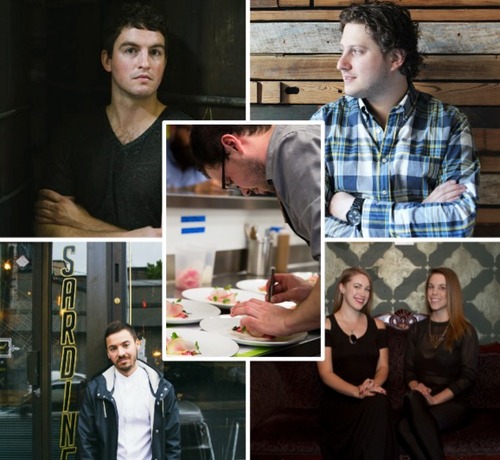 Maxwell Leer, 30
What he does: Wine director, Bestia, Los Angeles
Why he stands out: Has worked in some of the top restaurants in Los Angeles and is incredibly knowledgeable on esoteric wines.
CV highlights: Served as General Manager/Wine Director on The Tasting Kitchen's opening team. Went on to four-starred The Bazaar as Wine Director and now continues that title at top Italian restaurant Bestia. Also, Maxwell makes his own wine in conjunction with Filippi Winery in the AVA of Cucamonga Valley East of Downtown Los Angeles.
Why he's worthy of a Young Gun nod: "When Maxwell walked into the restaurant he looked about 16 years old and from Minnesota when we got to talking about wines I believe we only understood the first couple minutes of the conversation, after that it was way over our heads. That's when we knew he was perfect for Bestia." — Bestia chef Ori Menashe

David Schmidt, 29
What he does: Owner of Maïs, Café Sardine/Iwashi, Datcha, and Le Mal Nécessaire
Why he stands out: Responsible for upping Montreal's cocktail game.
CV highlights: Started off managing bars. Opened Le Chien Fumant at age 24. After selling the business to an associate, he went on to launch Cafe Sardine, which morphed into Japanese izakaya Iwashi by night. Then came Maïs, a casual taqueria. Datcha, a nightclub, followed. Most recently, Schmidt soft opened tiki bar Le Mal Nécessaire.
Why he's worthy of a Young Gun nod: "Dave Schmidt is as responsible for the recent improvement and upturn of Montreal's cocktail culture as anyone. His projects - whether nightclub Datcha, tiki snack bar Le Mal Nécessaire, or café cum izakaya Sardine/Iwashi - are earnest, well-thought-out places where people gather comfortably to drink and eat. Perhaps most importantly, Schmidt has a knack for choosing spaces in interesting, not altogether obvious parts of the city and transforming them into seamless and welcome additions to the neighborhood." — Eater Montreal Editor Ian Harrison

Aaron Gottesman, 29
What he does: Chef de cuisine, The Fat Ham, Philadelphia
Why he stands out: "The opening of The Fat Ham was exciting for Philadelphia because it was a fairly new concept for our area ... [Aaron] continues to deliver big flavored, soulful food in a rustic style with refinement." — Chef Marcie Turney
CV highlights: Was promoted from numerous line cook positions at Sbraga to chef de cuisine of The Fat Ham in about a year and a half. Between stints with chef Sbraga, Gottesman opened a new commercial space at Reading Terminal Market in Philly for Border Springs Farm, one of the premier lamb farms on the East Coast.
Why he's worthy of a Young Gun nod: "Aaron's true talent as a chef shines in his ability to be creative and think outside of the box, while maintaining respect for the ingredients and culinary traditions from the South. He is a 'young gun' and just a general badass chef! I can't think of anyone else that I would rather have, or trust, to be in the kitchen at The Fat Ham." — Chef Kevin Sbraga

Joel Stocks, 26
What he does: Chef, Holdfast Dining, Portland
Why he stands out: As one of his public nominations noted, "Trustworthy, experienced, intelligent, loyal and incredibly hard working ... everything you want in that gunner on your side."
CV highlights: Attended the CIA in Hyde Park and landed an externship at the French Laundry. Served as sous chef at Graham Elliot's namesake flagship restaurant in Chicago. Now runs Holdfast Dining, an underground restaurant in his hometown of Portland with friend Will Preisch. The pair cook/serve a nine course tasting menu to 14 diners three nights per week.
Why he's worthy of a Young Gun nod: "Joel was never late, his station was always ready and clean for service, I didn't have to worry about the product he had prepared, I knew it was good quality, there was a trust I had with him that I rarely had with other Sous Chefs I had in my past ... It takes a great deal of care, forethought, intelligence, training, love and mastery of touch to be good like Joel, I definitely learned a few things from him while he worked in my kitchen ..." — Grand Cru Hospitality Owner Patrick Miller

Christina Dylag, 26 & Pamela Dylag, 30
What they do: Co-owners, Velveteen Rabbit, Las Vegas
Why they stand out: "Christina and Pamela are the scrappy underdogs who make Las Vegas great. They bought a burnt out building in a neighborhood that sorely needed some TLC and made it into a destination for those who want creative cocktails." — Eater Vegas Editor Susan Stapleton
CV highlights: After working at MARKET in Del Mar, Christina took a five month trip to India, Nepal, and Thailand, and while traveling, she was inspired to open a craft beer and cocktail bar in Las Vegas named Velveteen Rabbit. Pamela bounced from Portland to Tokyo to a sustainable living project in the jungle of Misiones, Argentina. Both sisters are mostly self-taught mixologists. The sisters have also launched a cocktail consulting company, Spirit Forward Ventures, with one of their bartenders.
Why they're worthy of a Young Gun nod: "I cannot think of two more gutsy, well-traveled and keenly focused young women than Christina and Pamela Dylag ... I look forward to the Rabbit's seasonal menus—which are always audacious, and which always teach me something new—as much as I look forward to seeing what's new on tap. This is a rare conundrum for me: whether to have a beer or a cocktail because both lists are so strong." — Vegas Seven Senior Dining, Beverage & Nightlife Editor Xania V. Woodman
· All 2014 Young Gun Coverage [-EN-]