OpenTable By the Numbers: From Launch to $2.6 Billion

Share All sharing options for: OpenTable By the Numbers: From Launch to $2.6 Billion

Today travel reservations giant the Priceline Group announced they'd acquired online restaurant reservations leader OpenTable for $2.6 billion. That is an astronomic amount of money. Of course, that's nothing in the tech world, where WhatsApp went to Facebook for $19 billion, but it is in the neighborhood of acquisitions like Google's Nest deal ($3.2 billion) or Apple's deal with Beats ($3 billion). But the question is: how did the 16 year old OpenTable get to $2.6 billion? And is it actually worth that much money?

Bloomberg crunched the numbers on the deal itself, and notes that the $2.6 billion purchase price is 53% higher than the company's average stock price over the past 20 days: "That's the highest premium since 2007 for a North American Internet deal of more than $1 billion." Forecasts look good for the company, and revenue is expected to grow 19%, which has them at $226 million in revenue for 2014.

Still, OpenTable certainly appealed to Priceline enough to fork over a huge amount of money for it. Forbes notes that there's a trend in reservations websites "offering activities beyond transportation and lodging." Hopefully they're prepared to take on the super-crowded restaurant tech sphere, though: both Bloomberg and Forbes bring up the fact that stocks for related companies like GrubHub, Groupon, and Yelp rose after the acquisition was announced.

And let's not forget the baby boom in restaurant reservations tech recently. Nick Kokonas just released a massive bomb of data concerning his ticketing system, which, while small, is turning quite the tidy profit for his Chicago restaurants. Apps like Resy and others address the issue of nabbing hard to get reservations.

Obviously none of these have the market share of OpenTable, but every company starts somewhere. Below, Eater takes a look at the history of OpenTable's growth by the numbers, starting from the very beginning. 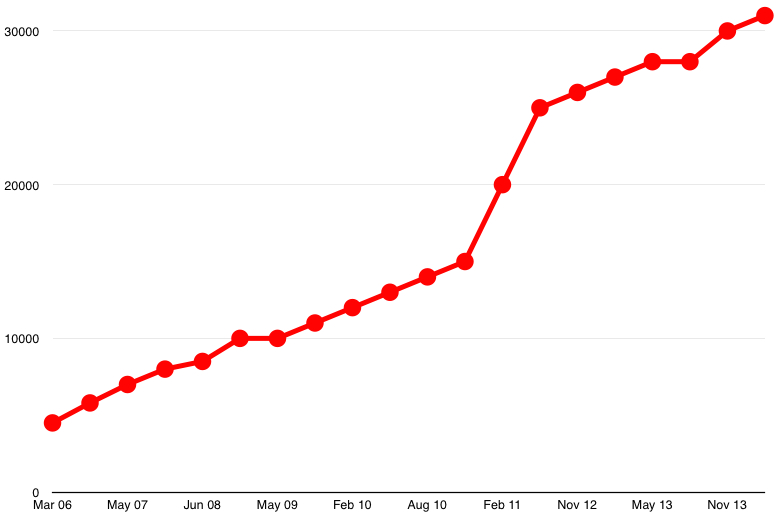 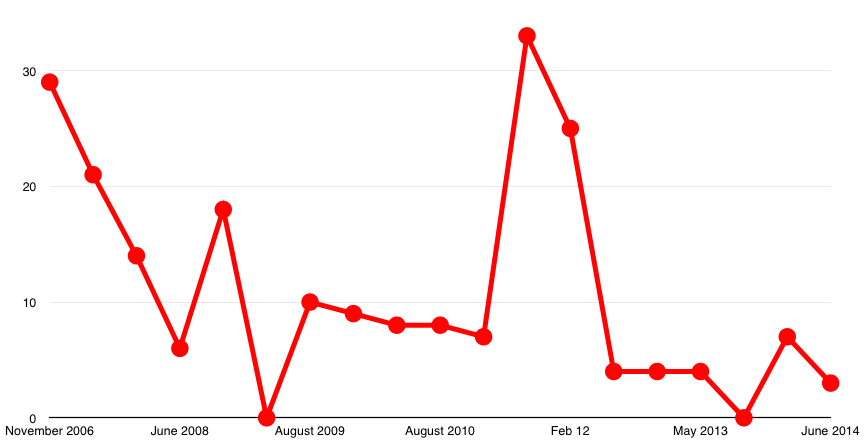 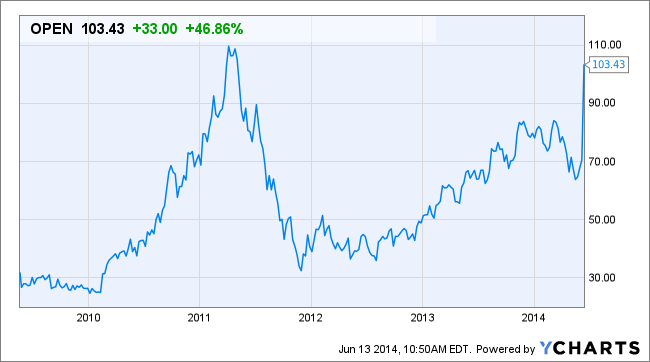 This chart shows the stock performance of OpenTable (OPEN). The spike at the right side of the chart reflects the surge in share pricing after today's acquisition news.

OpenTable's History, By the Numbers

Chuck Templeton founds OpenTable after noticing "the difficulty his wife faced while trying to book a dinner reservation by phone." Fortune notes that in 1998, most restaurants didn't even have computers. Templeton raised $36 million over two years.

According to Fortune, in 2001 OpenTable was hemorrhaging money: despite operating in 50 cities, they were spending $1 million a month and bringing in just $100,000 in revenue. Needless to say, investors weren't happy.

July: Priceline acquires Booking.com, a European hotel reservations website, for around $133 million in cash. TNooz.com called it "the most profitable travel deal of the 2000s."

January: OpenTable files registration for proposed IPO. According to their S-1, there were 30,000 reservation-taking restaurants in the US at the time. OpenTable claimed 10,000 of them as customers.

May 21: OpenTable's grand stock market debut: the initial public offering consisted of 3,000,000 shares at $20.00 per share. The Wall Street Journal called it "better than expected."

Early 2011: According to the San Francisco Chronicle, OpenTable "seated more than 22 million diners at restaurants worldwide" in the first quarter of 2011. Meanwhile, competitors like Urbanspoon's Rez have started to pop up.

April: OpenTable claimed almost 25% of Bay Area reservations, although the Peninsula Press writes that only 9% of reservations were made through the website nationwide.

November: Priceline acquires Kayak for $1.8 billion. In a press release, Priceline explains: "the transaction values KAYAK at $1.8 billion ($1.65 billion net of cash acquired) or $40 per share of KAYAK (subject to the collar described below), with the Group paying approximately $500 million of the consideration in cash and $1.3 billion in equity and assumed stock options." Per Bloomberg, the $40 per share price tag "represents a 29 percent premium over yesterday's closing price at $31.04" and Priceline's biggest acquisition to date. Priceline announces that Kayak will continue "independent operations" under its current management (as in the OpenTable acquisition in 2014).

July: OpenTable "partners" with competitor Urbanspoon's reservation service. OpenTable acquires UrbanSpoon's Rezbook reservation system, which was launched in 2010 as a more affordable option for online reservation making. The terms of the deal are undisclosed. 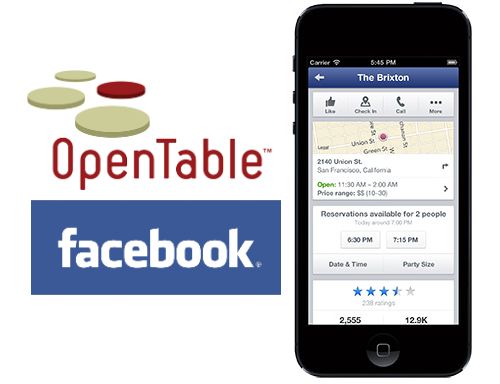 August: Facebook partners with OpenTable to offer reservations at 20,000 restaurants direct from restaurants' mobile Facebook pages. The terms of the partnership are private, but presumably OpenTable gets a windfall.

December: Apple files a patent application for their very own reservation and ordering system. Immediately OpenTable stock dips, going down by some 3.51% in a day.

December: OpenTable acquires "guest management system" developers Quickcue for $11.5 million in cash. The move to purchase a company known for sophisticated mobile waitlist technology may or may not be a response to Apple's patent application. OpenTable stock is slightly up from the dip after the Apple patent reveal.

February: OpenTable acquires the "personalized reservation recommendations" app Ness for $17.3 million in cash. According to TechCrunch the transaction "comes with cash in Ness's coffers that brings the net value to $11.3 million." OpenTable's plan is to discontinue the app and integrate its technology into the OpenTable recommendation platform.

June: Priceline acquires OpenTable for $2.6 billion in cash. OpenTable will continue to operate as an independent brand under its current management. Per a company statement: "You'll have the same real-time availability at more than 31,000 restaurants worldwide, the same super-convenient mobile apps and the same rewarding points program. We will also continue to rollout our new payment product that lets you easily pay with your OpenTable mobile app without asking for the check."

The Wall Street Journal reports that Priceline "offered $103 a share in cash for the company, a 46% premium over its closing price Thursday." Per Yahoo, OpenTable closed yesterday at $70.43 per share. OpenTable share prices today have been hovering just above Priceline's $103 offer price, having hit $104.32.