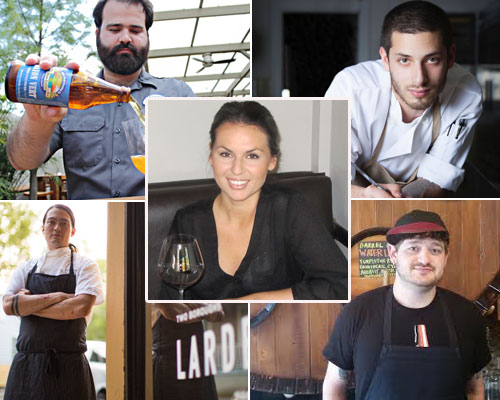 Chris Hathcock, 27
What he does: Sous chef, Two Boroughs Larder, Charleston
Why he stands out: As one of his public nominations noted, Hathcock's charcuterie is "life-changing" and his pasta dishes "exquisite."
CV highlights: Began in the business at 15, as a dishwasher/prep cook for a catering company in Savannah. Worked as a sous chef at East West Bistro while in college, and then at The National, both in Athens, Georgia. He later moved to their sister restaurant Empire State South, before taking on his current position.
Why he's worthy of a Young Gun nod: "I think his work is incredible. He truly has a grasp on the science and art of fermentation. I had the pleasure of working events with him in Atlanta when he was at Empire State South, and I've eaten his food since at Two Boroughs Larder. They were very wise to bring him from Atlanta.... I think he's going to become a force in cooking on a national level over the next few years." —Chef/restaurateur and Young Gun Committee member, Ashley Christensen

Josh Nebe, 27
What he does: Cook, Radiator Whiskey, and founder of the German pop-up Dackel, Seattle
Why he stands out: He helmed his first kitchen at 23 and is making a name for himself in Seattle with his charcuterie. Related: Nebe says his favorite dish to prepare is a hot dog, because "there's something hilarious to me about being in a badass restaurant and making a hot dog and serving it on a bun." But the menu at Dackel (translation: dachshund) shows he's not joking around when it comes to his taken on German cuisine.
CV highlights: Began cooking at 18 at Ferrara on Vashon Island, and then moved on to man the wood-burning oven at Seattle's Brasa. (Both are now closed, but a decade later, he's back to working with the Ferrara team.) Did a stint at the Steelhead Diner in Pike Place Market and at Barrio, before running the kitchen at Unicorn, where he worked on and off for three years. Has also worked as a chef at places like Marjorie and Blind Pig Bistro.
Why he's worthy of a Young Gun nod: "Josh Nebe has been cooking since he was a teenager, building a slow, steady following: Before his post at Radiator Whisky he cut his teeth in Seattle kitchens including Barrio and Marjorie. If and when his excellent Dackel project will remain a pop-up or morph into a brick-and-mortar is yet to be seen, but I'll go wherever Nebe serves his insanely good spaetzle with sauerkraut." —Sara Billups, Eater Seattle Editor

Amy Racine, 25
What she does: Wine Director, Sons & Daughters and The Square, San Francisco
Why she stands out: Quickly earning her sommelier certifications, while moving up the ranks from sommelier to wine director of two restaurants in San Francisco.
CV highlights: Knew she wanted to be a chef as a kid, and launched her career at 15 as a hostess at a Red Robin in Ohio. Attended the CIA, where she externed at The Greenbrier, before discovering her passion for wine during a class in school. Upon graduating, she immediately enrolled in a 9-month wine and beverage program and then landed a job as a sommelier at Utah's Amangiri Resort. Joined the Sons & Daughter's team in 2012, and recently passed her Advanced Level III sommelier certification.
Why she's worthy of a Young Gun nod: She's only been in the business for a few years, but Eater San Francisco editor Allie Pape says Racine's "already a 'name' in the the local sommelier community."

Jarrett Stieber, 25
What he does: Pop-up chef, Eat Me, Speak Me, Atlanta
Why he stands out: His impressive collaborations in the Atlanta food scene, plus strong nominations from the public. As one person put it, "He is steadily expanding his creativity in dishes via wild and delicious explorations while remaining faithful and dedicated to local farmers. Basically, he makes delicious food and I will eat anything he puts in front of me."
CV highlights: Kicked off his career at Alon's Bakery and the now-shuttered Jöel, while he was still in high school. During culinary school he interned at Restaurant Eugene, before transferring to Holeman and Finch. Worked at Abattoir for a year, and then took a position as a butcher/charcutier at Empire State South.
Why he's worthy of a Young Gun nod: "Chef Jarrett Stieber's semipermanent pop-ups are an asset to Atlanta. His food is consistently tasty, thoughtful, and beautifully prepared, especially considering he's essentially running a one-man show out of other people's kitchens. Much of the city is looking forward to the future and seeing what he could do in a place of his own." —Sonia Chopra, Eater Cities Editor

Shannon "Sam" Wynne, Jr., 29
What he does: Co-Founder, Braindead Brewing and partner at Rodeo Goat, Dallas/Fort Worth
Why he stands out: His indefatigable commitment to beer in Texas. In 2009, he became the youngest cicerone in the country and was also one of the founding board members of North Texas Beer Week. One of his nominators pointed out Wynne's efforts to raise funds helped lead to over $50,000 in donations to the charity Pints for Prostates.
CV highlights: Started as a bar back at 18 at beer stop Flying Saucer, before moving up to bartender and, later, training staff, aiding in the opening of new locations and finally earning the title of assistant beer director for the growing brand. Became a partner at beer-centric burger joint Rodeo Goat in Dallas, and is now launching the brewpub Brain Dead Brewing.
Why he's worthy of a Young Gun nod: "It's fun to watch him work. I feel honored to call him a partner because he really gets it and if he doesn't, he'll be the first to tell you. I become a better person being in the room with him. He possesses a certain self awareness that escapes many younger people. But where he truly shines is in the articulation of an idea. No matter the audience, he's able to adjust accordingly in order to communicate in a language that the people will understand. It's a sight to see." —Jeff Fryeman, Wynne's partner at Braindead Brewing
· All 2014 Young Gun Coverage [-EN-]