In what cities are its residents most likely to have a little alcohol in their blood? According to data collected by smartphone Breathalyzer device BACtrack — which allows drinkers to self-administer a test estimating of the percentage of alcohol in their blood — boozers in Dallas and Oakland reported the highest average BAC ratings, at 0.091 percent in both cities. (The "legal limit" to avoid a DWI in both states is 0.08 percent.) Users in Scottsdale, Arizona and Las Vegas followed closely behind, while Houston BACtrackers reported the lowest average, at just 0.034 percent. 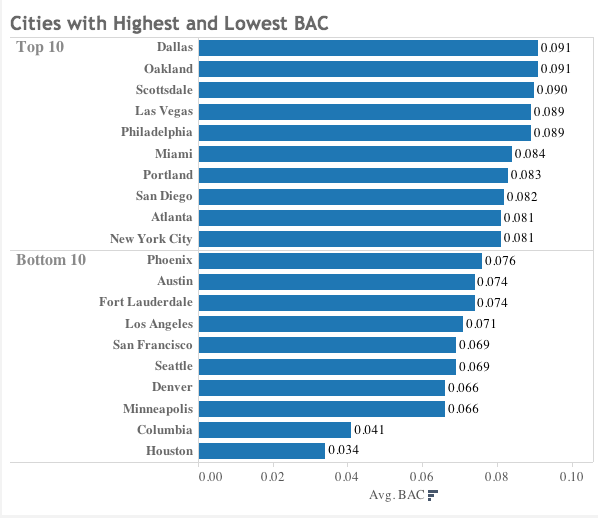 But while Dallas, Oakland, and Scottsdale reported the highest BACs, that doesn't mean they're the "drunkest" cities in the nation: In an explanation of methodology, BACtrack explains its Consumption Report uses data aggregated from consenting users who have enabled location services, and "does not represent data from all users." And because BACtrack itself is self-administered test, the higher numbers could also be as a result of more cautious drinkers (who are more likely take the test before getting behind the wheel of a car), or more app users. (According to data, BACtrack users in Minneapolis, Denver, and Portland test themselves most frequently; Portland lands at #7 on the highest BAC list).

The data also reveals the largest drinking days of the past year, in terms of app users: Unsurprisingly, the highest Breathalyzer score averages occurred on New Year's Eve and Super Bowl Sunday. Randomly, America also got extremely drunk on Sunday, June 22, 2013, with an average BAC of 0.115.