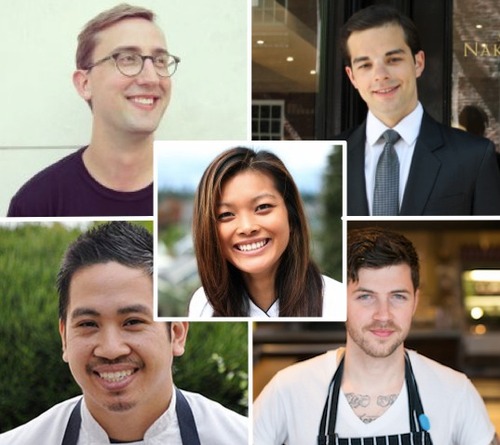 Jon Bautista, 29
What he does: Chef de cuisine, George's California Modern, San Diego
Why he stands out: Per Eater San Diego Editor Candice Woo, "George's California Modern is a pretty amazing showcase for what can be accomplished when the best in local ingredients combines with a kitchen's cooking prowess; Jon Bautista is definitely on the front lines of young talent in San Diego. Plus, he's always posting cool food photos on his Instagram."
CV Highlights: Was on the opening team of Michael Voltaggio's ink. in Los Angeles. Ran dining at Kitchen 1540 at San Diego's L`Auberge Del Mar at age 28 and now works under one of the city's top chefs, Trey Foshee. Presently serves as chef de cuisine and oversees day to day operations for one of the top restaurants in San Diego.
Why he's worthy of a Young Guns nod: "Jon is the kind of CDC that sets the example. He enjoys working and enjoys spending time with the crew. His work ethic and consistency sets the tone for the kitchen." — Chef Trey Foshee

Mitch Bates, 29
What he does: Chef de cuisine, Momofuku Shōtō, Toronto
Why he stands out: As one of his public nominations noted, "Opened best new restaurant in Toronto after coming from 2 Michelin star Ko in NYC."
CV Highlights: Was a line cook at Vong, Morimoto, and Cru. Went from lead line cook to chef de cuisine at Ko then relocated to Toronto a couple years ago and has been running the show there ever since.
Why he's worthy of a Young Guns nod: "There's a creativity Mitch has that I don't think anybody I know has. Simply put, he made probably the best dish I think Momofuku has ever made … it's a corn pudding ravioli with chorizo oil … he makes amazing and delicious food and most importantly he's a fun guy. Totally goofy and you never know what he's going to say." — Chef Dave Chang

Doug Hopkins, 24
What he does: Service director, Sushi Nakazawa, New York
Why he stands out: Is a certified sommelier and manages front of house at Manhattan's hottest sushi restaurant, one which also received a perfect four stars from the NY Times and three stars from Eater's Ryan Sutton.
CV Highlights: Worked at restaurants in Long Island before being hired by Jean Georges as front waiter at age 22.
Why he's worthy of a Young Guns nod: "Douglas is an integral part of our operation at Sushi Nakazawa. I strongly believe part of our success can be traced directly to Douglas. Besides being organized, attentive, and professional, he is one of the most loyal people I have ever met. His commitment to Sushi Nakazawa is unparalleled." — Sushi Nakazawa Owner Alessandro Borgognone

Lieu Hoang, 27
What she does: Sous chef, Brimmer & Heeltap, Seattle
Why she stands out: "At first glance her passion, enthusiasm, and drive are palpable. She is well respected and adored by our crew and guests ... it's great to see a new, fresh face that you know without a shadow of a doubt will rise to the top at some point in her youthful career." — Brimmer & Heeltap Owner Jen Doak
CV Highlights: Was on track for a business degree in college but made a game changing decision to leave behind a full ride scholarship to pursue a culinary passion. Landed a gig as a prep cook at Seattle's celebrated small plate eatery Poppy and within two years became sous chef. Decamped to travel in Vietnam and was later recruited to be sous at lauded newcomer Brimmer & Heeltap.
Why she's worthy of a Young Guns nod: "Mike and I initially did not set out to hire a Sous Chef. It wasn't until Lieu was introduced to Chef Mike and he recognized the potential she had to support us with her drive, and creativity." — Brimmer & Heeltap Owner Jen Doak

Sieger Bayer, 26
What he does: Chef/general manager, Leghorn Chicken, Chicago
Why he stands out: In addition to being a rockstar chef, Bayer was also an early contestant on The Taste and writes the satirical column Grubbin' for Element Collective's Rabbit Hole magazine.
CV Highlights: Cooked at Old Town Social and Nellcôte. Helped develop all original recipes for newbie hotness Leghorn Chicken. Despite having just begun, Bayer is leaving Leghorn on June 21 to serve as sous chef under Tony Quartaro at the upcoming Formento's.
Why he's worthy of a Young Guns nod: "I'm incredibly proud to have someone as talented as Sieger on our team. He brings sound technique, passion, a balanced sense of humor, and a commitment to reaching the highest standards on a daily basis. He is in this business for the right reasons, to learn, teach, and develop himself and others around him. For all of his cooking skills, he's an even better person and he's going to go far in his career." — Chef Tony Quartaro