The Road to the 38: Michael's Genuine Food & Drink, The Cypress Room in Miami

Share All sharing options for: The Road to the 38: Michael's Genuine Food & Drink, The Cypress Room in Miami

Miami will never come up short on high-wattage, wallet-draining dining: The city's genetic code demands glitz and excess. But in the last few years, several Miami restaurant groups have emerged with smart, mid-scale restaurants to help counterbalance the glitter factories—including Miami Beach successes like Pubbelly (gastropub meets Korean and other Asian cuisines) and Yardbird (unabashed Southern cooking with fried chicken as the showpiece).

Who kicked off this trend? Michael Schwartz. The Philadelphia native had cooked in South Beach restaurants for years, but in 2007 he migrated to Miami's then-transitional, now-luxe Design District and launched Michael's Genuine Food & Drink. He grilled whole fish in a wood-burning oven and made lilting salads out of vegetables culled from area farms. That may sound typical to many parts of the country; in South Florida, Schwartz's approach was radical. More than any other chef, he introduced the local-seasonal ethos to Miami. Crowds mobbed the place. The city's restaurant industry took notice.

Fast-forward seven years: Schwartz's company, The Genuine Hospitality Group, now operates five restaurants, seven if you include his seafaring ventures aboard Royal Caribbean cruise ships. As a frequent vacationer in South Florida, Michael's Genuine has been an old favorite. I worry, though, when chefs become more businesspeople than cooks. Does the original restaurant lose the moxie that brought them acclaim in the first place? I went to check in on Schwartz's firstborn and also to his latest Design District venture, The Cypress Room, a cozy fine dining throwback that opened last year. 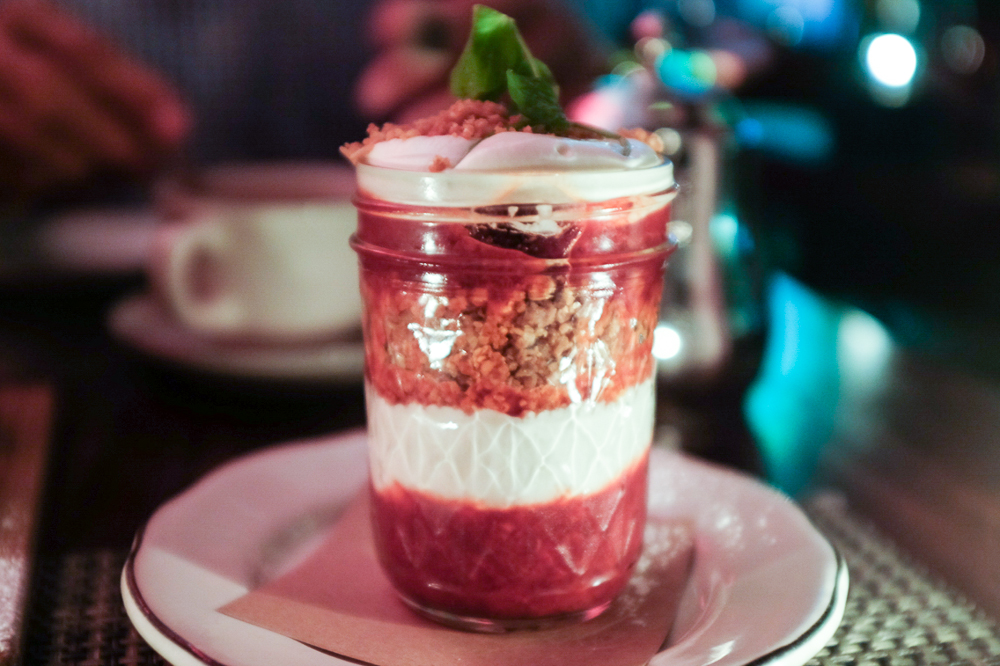 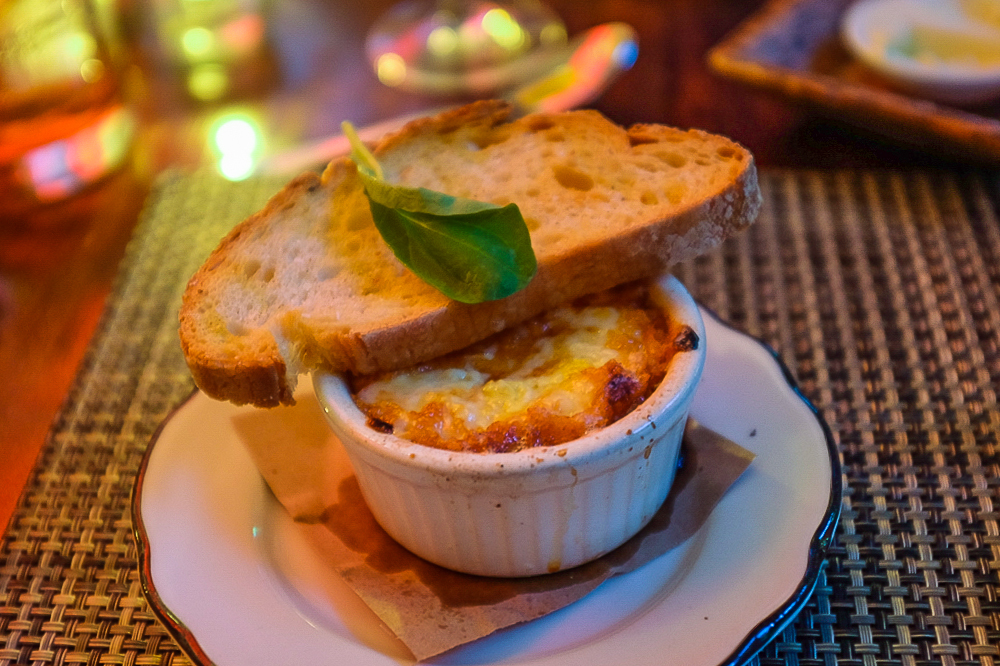 I'll start at the finale: There's doubtful a better pastry chef in South Florida—or likely the whole state—than Hedy Goldsmith. The child-like pleasures of her desserts belie the technical savvy she employs to achieve such apparent simplicity.

I ordered a strawberry-rhubarb parfait at the end of a long meal—it was the option that most conjured spring. What arrived was a fruit crisp re-engineered to fit in a jar. A fresh, thick confiture mingling rhubarb's tartness and strawberry's sunny sweetness had been layered with crisp, oatmeal-studded streusel and drifts of mascarpone custard. I took one spoonful and didn't look up until I had finished scraping the glass spotless. Only then did my attention turn to two beautifully misshapen doughnuts with a small dish of raspberry jam for dipping and a crock of lemon pot de crème for smooth, invigorating contrast.

Without dessert, I probably would not have left Michael's Genuine quite as ecstatic. The meal was reminiscent of a small-town fireworks display: It began with a bang but then sputtered through the middle before rallying for an eye-popping finish. The menu is divided into plates of four sizes: small, medium, large, and extra-large. I wanted to try a dish from each section. When two of us asked to share the roasted chicken from the extra-large options, our server said, "Oh! Did you know that dish takes an hour?" Hmm, no. Might be helpful to include a note about that detail.

Like a small-town fireworks display, the meal began with a bang, sputtered through the middle, then rallied for an eye-popping finish

So we filled the time with memorable dishes made with the top-notch ingredients on which Michael Schwartz hangs his reputation: a rich concoction of farm egg, gruyere, and tomato baked until bubbly and crusty on top; nicely singed octopus with a salad of gigantes beans, roasted peppers, and a scattering of herbs; an entree of locally caught, grouper-like wreckfish sparked with a Meyer lemon vinaigrette and a bouquet of arugula. And we had plenty of time to soak in the scene around us. Few seats on the restaurant's patio—a plant-filled courtyard surrounded by clothing stores—or in the dining room stayed empty for long. As daylight fades, the restaurant's interior takes on a crimson glow from massive square fixtures overhead: They look like Rubik's Cubes with whom someone grew impatient and painted a solid red.

Finally our chicken arrived. It was fragrant from its time in the wood oven, comely with its crown of plumped raisins and pine nuts … and dry. It had cooked about ten minutes too long. So had a side of roasted broccoli—the tips of the florets tasted dusty they were so desiccated. 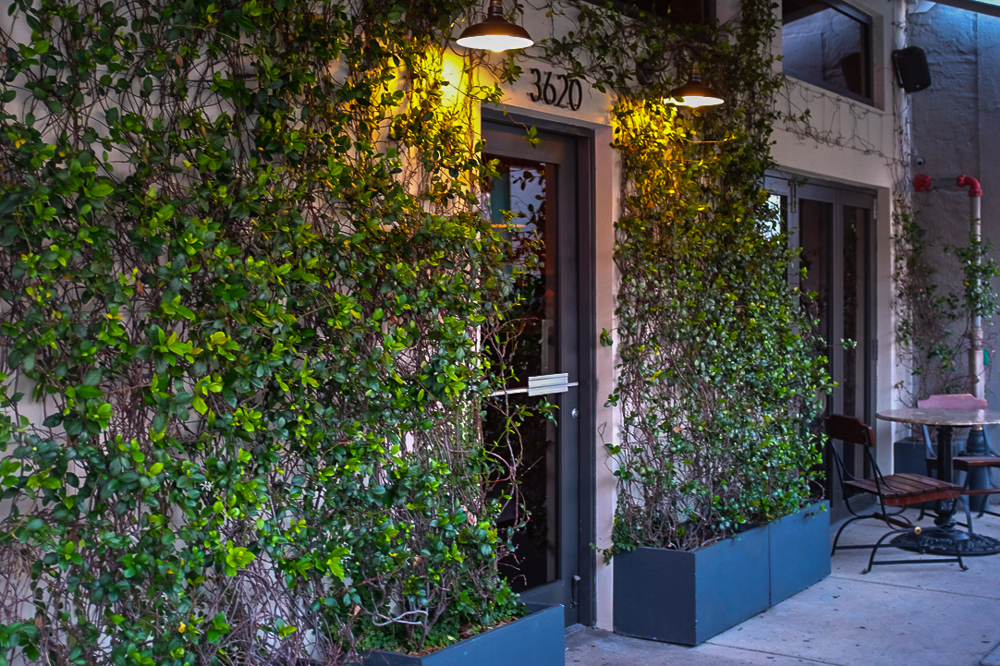 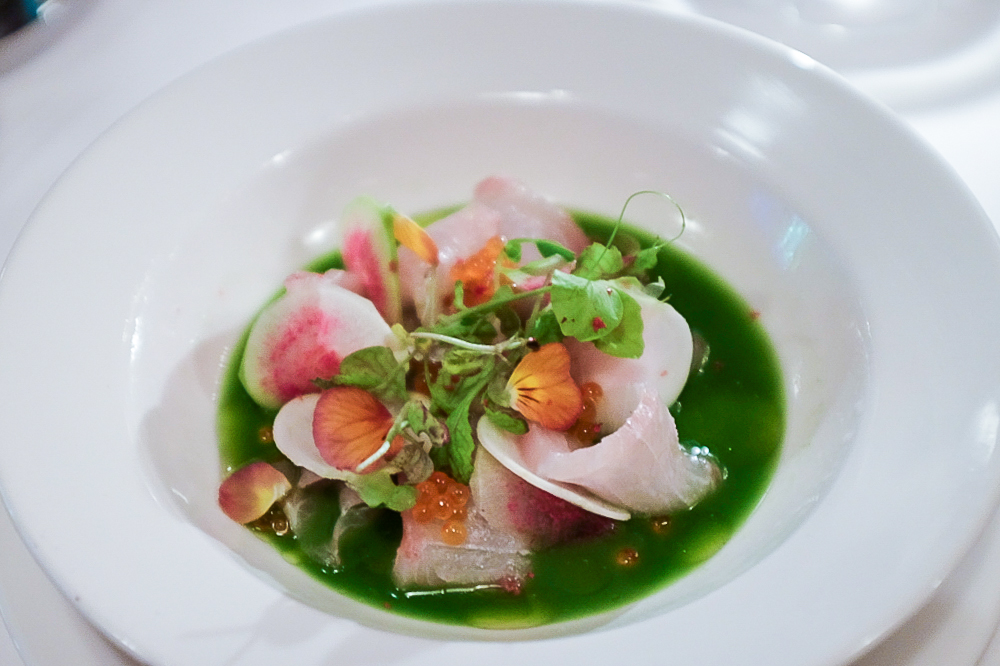 General manager Amanda Su was resetting the table next to us. We watched her drape a thick white linen cloth over its top—and then she busted out a portable iron on the spot to steam out its wrinkles. When was the last time anyone gave that kind of attention to appearances in our age of casual dining?

The Cypress Room, which opened in March 2013, is five blocks away from Michael's Genuine but sits on a much quieter stretch, away from the crush of shops. Stepping into the restaurant feels like you're traveling much farther. Schwartz wanted the restaurant to evoke a 1920s supper club, decorating pecky cypress paneling with taxidermy (as in deer and boar heads) and other walls with ornate rose-and-cream papering. Crystal chandeliers hang from the ceiling, and the tufted banquette is a shade of pale green that evokes funky midcentury Florida motels. The elements together create an odd, wonderful formality that doesn't take itself too seriously.

The restaurant might be out of character for Miami, but diners don't seem concerned: We scored the last free reservation on a recent Monday night. And the staff immediately ushered us into a gracious cocoon of comforts, beginning with some finely tuned cocktails. The Thunderball (Atlantico Anejo rum, orange, pineapple, Cardamaro) harmonized in calypso rhythms along with red shrimp sashimi bathed in coconut milk and lime and dotted with puffed rice for a pop of texture.

Schwartz and chef de cuisine Roel Alcudia (who previously held the same position at Jonathan Waxman's Barbuto in New York) create a menu that interlaces the past and the present—with steakhouse classics like bone marrow, onion soup, and filet mignon in red wine jus emerging from the same kitchen cranking out modern upscale plates. We leaned toward the more of-the-moment dishes, like cobia crudo in cucumber juice with asparagus, snow peas, a teaspoon or so of salmon roe—ideal food for the Florida weather. Lamb (rosy saddle and merguez sausage) was arranged over a ratatouille whose flavors had been merged slowly and seductively.

We all have our burger fetishes; I lean toward thick, blushing hunks of beef rather than stacked thin patties. The Cypress Room's pudgy boulder of burger—made from ground chuck and the trimmings from dry-aged côte de bouef (which the restaurant serves for two) and oozing onion marmalade and a tangy New Hampshire cheese—pushed all my happy buttons.

And of course we couldn't leave without sampling one of Hedy Goldsmith's desserts. As befitting the Cypress Room's tonier vibe, she dresses up her tomboyish playfulness with a bit of culinary lipstick: A coconut cake, for example, is cut into squares and splayed in a crescent moon shape over a puddle of white chocolate cream, with a side of lime ice to revive the palate after a luscious meal.

How much does it cost?: Small plates $9-$13, medium plates $13-$20, large plates $19-$24, extra large plates $39 (roasted chicken) and $85 (dry-aged bone-in ribeye for two)
Ideal Meal: wood-roasted farm egg with aged gruyere, house salad (ever-changing with seasonal ingredients), local fish (such as wreckfish with Meyer lemon vinaigrette), and whatever among the outstanding desserts looks most appealing.
What to drink: The options on the wine list include glass pours from the Coravin, the devise that pierces through a bottle's cork without spoiling the wine inside. Oenophiles can score, say, a glass of Montrachet for $45 rather than buying the whole bottle.
Bonus tip: Reserve well in advance if you're planning on a weekend meal; weekday reservations are much easier to score.

THE CYPRESS ROOM
3620 Northeast Second Avenue, Miami
305-520-5197
website
Open for dinner Monday-Thursday 5:30-11 p.m., Friday-Saturday 5:30-midnight; lunch Monday-Friday noon-2:30 p.m.
How much does it cost?: Appetizers $14-$23, most entrees $24-$49, desserts $13-$16
Ideal Meal: fish crudo (changes daily), lamb with ratatouille and broccoli rabe, the burger, a dessert made with seasonal fruit.
What to drink: Don't miss the outstanding cocktails, including barrel-aged beauties like the Old Pal (Campari, Basil Haden bourbon, and two kinds of vermouth).
Bonus tip: Street parking is scarce; the valet is hidden toward the back of a lot to the left of the restaurant.


Email Bill at bill@eater.com and follow him at @BillAddison.
Best New Restaurants