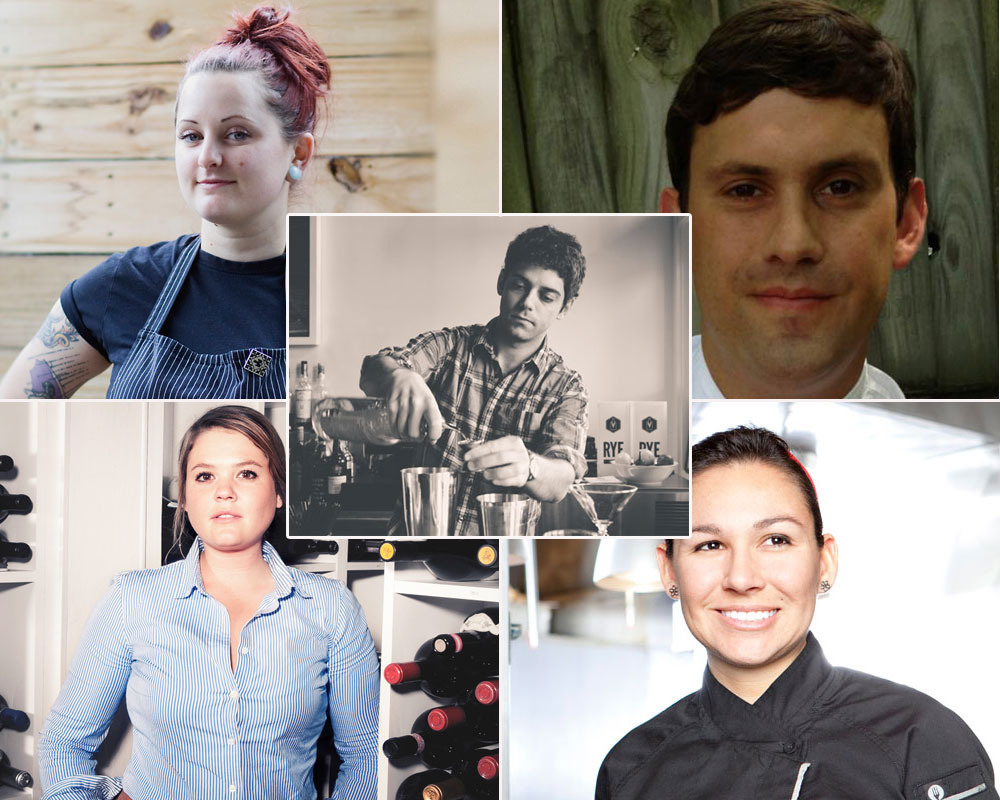 Thousands of Eater Young nominations have been whittled down to 53 outstanding semi-finalists. Now, it's time to get to know the most promising talent in the industry. Over the next few weeks, Eater will introduce the world to this pack of up-and-coming chefs, cocktail savants, GMs, sommeliers, and many more.

The experience these newbies have collectively racked up is impressive, as are the testimonials they've garnered from their bosses, Eater editors, and the selection committee. But, please, do heap on the praise. Send in your letters of admiration and testimonials for these 53 semi-finalists right here.

Carlin Karr, 28
What she does: Sommelier, Frasca Food and Wine, Boulder
Why she stands out: After being in the industry for just four years, she's a sommelier under Bobby Stuckey; helped start Frasca's popular Istituto per Il Vino wine dinners.
CV highlights: Running the front of house at San Francisco's Sons & Daughters, starting in 2010. Took the job as a sommelier at Frasca Food and Wine in 2012, was named one of Wine & Spirits Magazine's best new sommeliers in 2013. Passed the Advanced Exam from the Court of Master Sommeliers in 2013.
Why she's worthy of a Young Gun nod: "She's the antithesis of most young people her age. Young people want this rapid movement: they want to be a master sommelier today or do an accelerated MBA program. Carlin Karr contacted us a couple years ago, when she was already the GM and wine director of a Michelin-starred restaurant, Sons & Daughters in San Francisco. She said, 'I want to come work for you. I want to better build my foundation of hospitality, wine service and service in general.' To me, that is such a long view that so many people don't have. I look at someone like Carlin, who said at a young age, I'm going to take a step back to better build my platform, so I can be impactful for a long time to come." — Bobby Stuckey, owner and master sommelier at Frasca Food and Wine 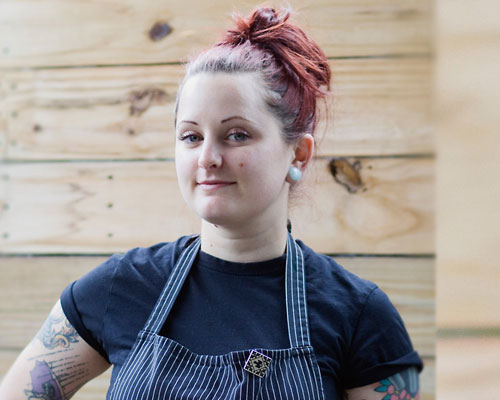 Sarah Mispagel, 28
What she does: Pastry chef, Nightwood, Chicago
Why she stands out: A nod from Eater selection committee member and the chef/owner of Avec Paul Kahan.
CV Highlights: Baked at Delphina's Artisan Bakery in Portland, Oregon and Sugar Plum's in Cincinnati, before heading to Chicago. She worked as a pastry chef at MK and as a pastry sous at Sofitel prior to landing her current role.
Why she's worthy of a Young Gun nod: "Pastry people are...different. Something about spending day after day meticulously testing and adjusting recipes gram for gram changes them. The word "crazy" gets thrown around. True to form, Sarah is...different. Crazy in the best possible sense. Her dedication to her craft is stunning. Her wild excitement in the presence of new and perfect product borders frightening. That she manages to value her kitchen environment and coworkers as highly as her product and plate is an unparalleled asset. There is no doubt in my mind, or the mind of anyone that gets the opportunity to work with her, that she will accomplish greatness." — Benjamin Lustbader, executive sous chef, Nightwood 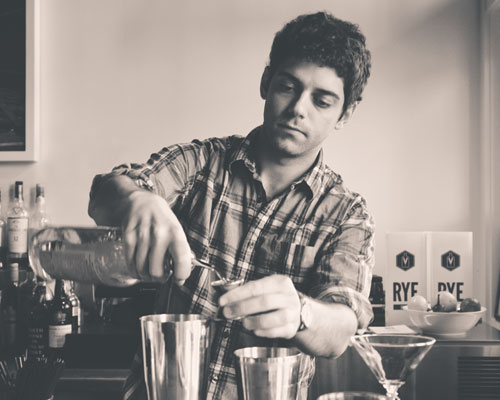 Doug Petry, 26
What he does: Bar manager, Rye, Louisville and founder of the Louisville Cocktail Competition
Why he stands out: He started as a bartender at Rye with no formal experience back in 2012 (previously, he was going to college in Boston and then did a stint at a bike shop before moving back to Louisville).
CV highlights: Studied cocktail books and shook up drinks at home, and then convinced Rye owner Michael Trager-Kusman to hire him. Two years later, he's running their bar program, where he caught the attention of former Young Gun and Jack Rudy Cocktail Co. owner Brooks Reitz (who was one of the people who nominated Petry). He also launched the Louisville Cocktail Competition, which is in its third year, and helps with the coffee program and bottled cocktails at Atlantic No. 5.
Why he's worthy of a Young Gun nod: "I really think Doug's changing the culture of bartending in Louisville, and I mean that in the best way possible. He's putting some respect back in that position...and he's making it more of an art. He's eager to change our cocktail program and always progress it forward. He really pushed the limits on how drinks are made here, and how we should perform. It's been a great progression." — Michael Trager-Kusman, CEO of MTK Products

Kirstyn Brewer, 29
What she does: Executive chef, Victor Tangos, Dallas
Why she stands out: She's helped turn 10-year-old Victor Tangos from a long-standing staple to one of the hottest spots of the moment.
CV highlights: Worked as a lead cook at The Bazaar by Jose Andres in Beverly Hills, and then as a sous chef at Westside Tavern in LA and at Hibiscus in Dallas, before taking the position she now holds.
Why she's worthy of a Young Gun nod: "Kirstyn Brewer left her hometown of L.A. to move here back in 2011 and worked her way up to executive chef last year at the ripe old age of 28. Since then she's gradually transformed the VT menu into a representation of her truly original style, replacing the old guard of mac and cheese and chicken and waffles with unusual dishes like grilled celery root with tonnato sauce." — Whitney Filloon, Eater Dallas editor 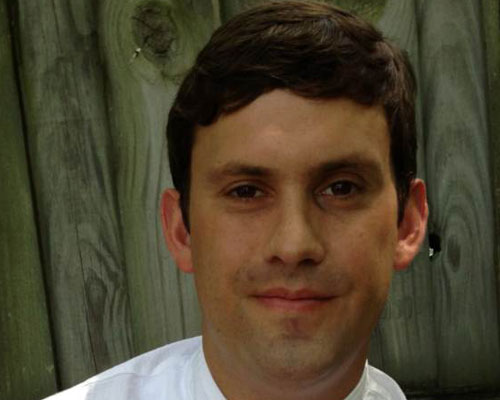 John Lasater, 28
What he does: Executive chef/GM, Hattie B's Hot Chicken, Nashville
Why he stands out: He created a spice blend for hot chicken that's garnered some national attention. Now, he's working to open a second Hattie B's, where he'll be the GM.
CV highlights: Staged with Michael Anthony at Gramercy Tavern, interned in the test kitchen at Saveur, worked "every station" at Capitol Grille in Nashville and then as the executive chef on the catering side of Porter Road Butcher. He moved over to Flyte World Dining and Wine and then joined the Hattie B's team before the opening.
Why he's worthy of a Young Gun nod: "Anyone that meets John and tastes his food immediately gets a clear picture of the passion he has for cooking. Utilizing his background in more upscale dining, he has worked (and honestly still works) to perfect the spice blend that has helped put Hattie B's Hot Chicken on the national map. They may not have been the first, but they are the new ambassadors of Nashville hot chicken, bringing it to, and making it relevant for, a whole new generation. And John has been a major part of their quick success." — Matt Rogers, Eater Nashville editor
— Katie Abbondanza
· All Young Guns 2014 Coverage [~E~]