Share All sharing options for: The Road to the 38: Night + Market, Pot, Sqirl in LA

I have much eating to do in Southern California before I compile Eater's first list of the essential 38 restaurants in America at the year's end. In this first pass through, I tried the wonderful Republique, a somewhat modern day Campanile; compared the tasting menus at the boundary-pushing Trois Mec and Alma; drove out to Bell to sample the authentic Mexican dishes at La Casita Mexicana; hunted down some of the best xiao long bao in the city at Din Tai Fung; dropped serious cash at one of the country's most expensive sushi restaurants Urasawa; and weighed in on a trio of established and new standouts Animal, Chi Spacca, and Maude.

What follows are the final three standouts from my Los Angeles explorations. 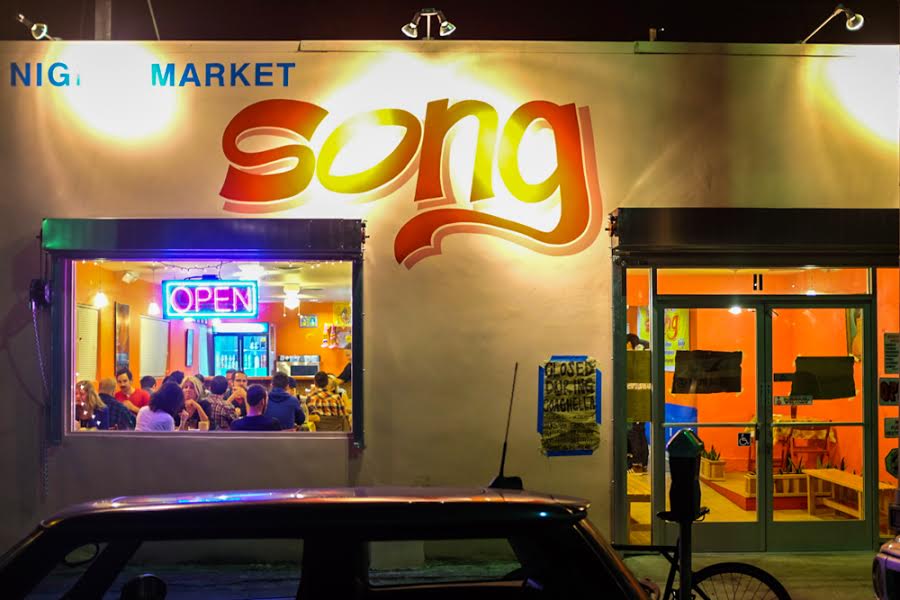 Cindy Crawford, in her 1989 poster wearing nothing but jeans shorts, stares out from the neon orange wall of Kris Yenbamroong's second Northern Thai restaurant. Its presence could be considered a joke—Yenbamroong gets the word "hipster" thrown at him a lot—but it can also be looked at as a talisman from the chef's childhood, a reminder that this colorful hole-in-the-wall on one of the more forlorn blocks of the Silver Lake neighborhood is an eating place born of two cultures: true-minded Southeastern Asian cooking and American chutzpah.

Yenbamroong has received plenty of deserved attention since 2010, when he opened the first Night + Market in West Hollywood in a space adjacent to his immigrant parent's restaurant, Talesai. While Talesai serves the dishes familiar at most Thai restaurants in America—chicken satay, crispy duck with ginger, massaman curry—Night + Market went for the culinary jugular: It homed in on the pungent, funky, meat-intense specialties of Northern Thailand that Yenbamroong first sampled on a trip as a teenager. His food found a fast audience.

Night + Market Song follows suit, though it just opened in March and, as Yenbamroong said on his website, it was in "soft open mode"—meaning it didn't yet offer any of the potent natural wines or beers that the original location serves. And I caught the restaurant in between Yenbamroong's stressful gig at Coachella.

All that said, the food rocked. I immediately understood the hubbub over the pork toro—pieces of fatty neck offset by the meat's intense char and the galangal-spiked chile dip on the side. My nose twitched at the unapologetic stench of prik gapi, a relish of shrimp paste and tiny bitter eggplants accompanied by fried eggplant slices in lacy egg batter. Honestly, it wasn't something I gobbled down, but if this restaurant existed in my neighborhood (and I wish it did) I'd keep revisiting the dish until my palate acclimated. My taste buds relaxed at the first bite of "Bangkok mall pasta," a tangle of spaghetti buzzing with the straightforward flavors of garlic, chili, basil, peppercorns, and, for the signature Thai sharpness, bits of dried, salted fish.

Yenbamroong's cooking has become a celebrity magnet—for famed chefs and otherwise. If the real Cindy Crawford showed up to savor this food, I wouldn't blink. 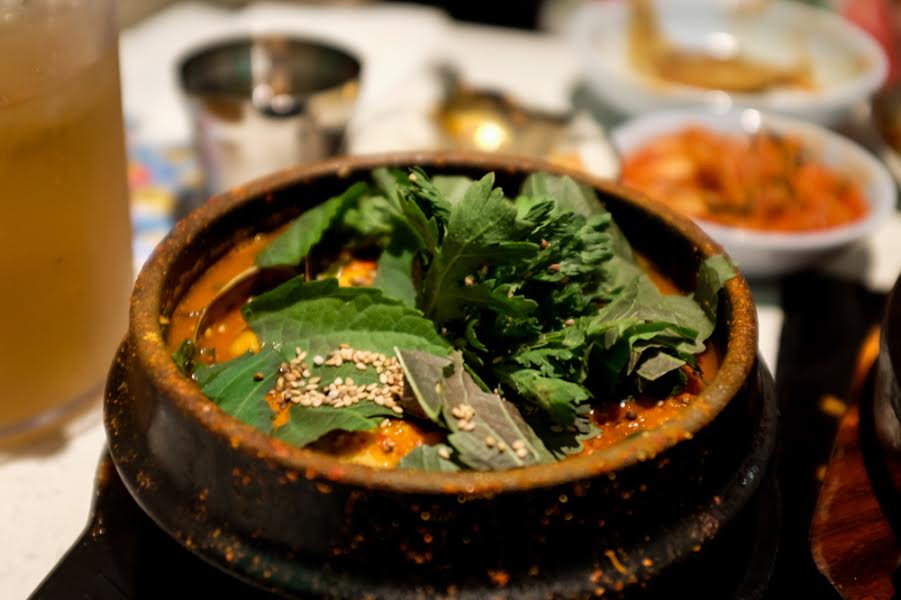 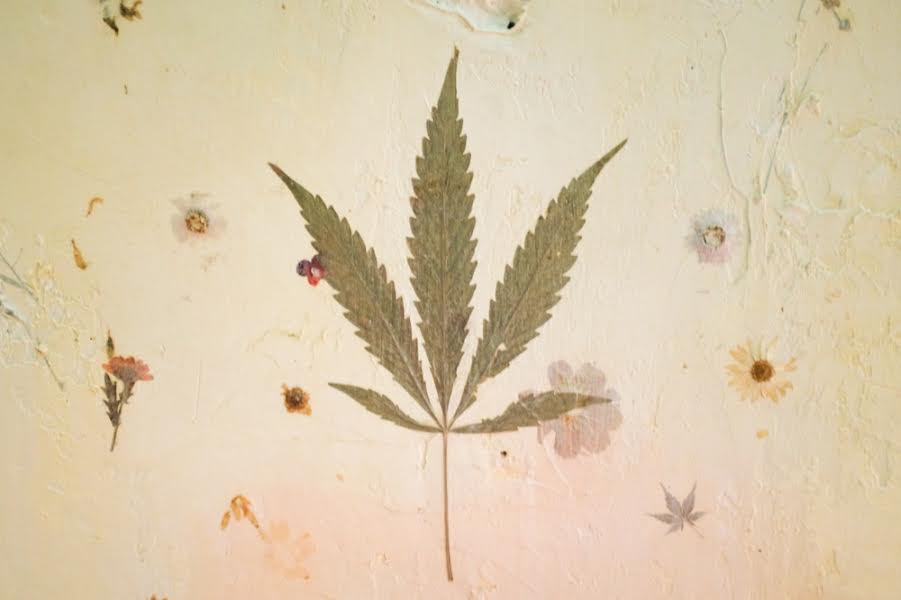 "Quick, stir the fried rice before it burns on the bottom," said my Korean friend, motioning to the sizzling platter in the middle of our table already crowded with dishes. We jabbed a hole in the poached egg on top of the dish to let the yolk run, then we folded it into the rice, ruddy orange with kimchi. The blackened morsels blistered from the plate's base were as satisfying as the scorched edges scraped from a pan of lasagna.

Then we submerged our spoons into a seafood soup called the Fisherman's Wharf, crammed with cod, shrimp, mussels, clams, and tofu. The stew exuded the traditional warmth of red chile paste, but the seasoning was more intense and immediate than I've ever tried before in Korean cooking. It took saltiness to the same enjoyable brink as the dishes at a restaurant like Animal. It tasted distinctly American in that way.

Welcome to chef Roy Choi's latest triumph Pot. Choi is of course most famous for his Kogi BBQ food truck, which brought Asian-Mexican tacos to the world. He, along with David Chang, ushered in Korean cuisine's ascendance into pop culture, a long time in coming. (Ruth Reichl wondered why Korean food wasn't more popular in the pages of the New York Times in 1993.) Choi's other restaurants, including A-Frame and rice bowl-themed Chego, blend global flavors overtly. Pot fixes more directly on Korean flavors, but through Choi's personal sensibilities. That's likely why Choi gives the seafood soup a catchy moniker that conjures the San Francisco icon, rather than calling it by the Korean name, mae-un-tang. All the hot pots on the menu have similarly quippy titles, like "Inside Story" (featuring offal) and Boot Knocker (a riff on a dish called "troop soup" with origins in the Korean War). Choi grew up in a Korean restaurant, but these aren't his family's recipes.

Pot is housed in the Line Hotel in the heart of L.A.'s Koreatown, and it forever rewires the notion of a hotel restaurant. The space is trippy, a sort of otherworldly cafeteria, with an eighties-era dropped ceiling and twinkly recessed lighting, hanging ferns, and imprints of flora and fauna on the wall—including a cannabis leaf to help fuel the inevitable pot double-entendres. Diners often start with a drink in the ring-shaped bar. I didn't take a shine to the uni cocktail that's all the chatter: My version was pummeled with cumin. But I can't wait to return to the restaurant itself and explore more of the huge menu presented on newspaper.

On the night I ate at Pot, a few weeks after its opening, the crowd was predominately Asian. The neighborhood is embracing Choi's vision. I've no doubt the rest of the world will follow. 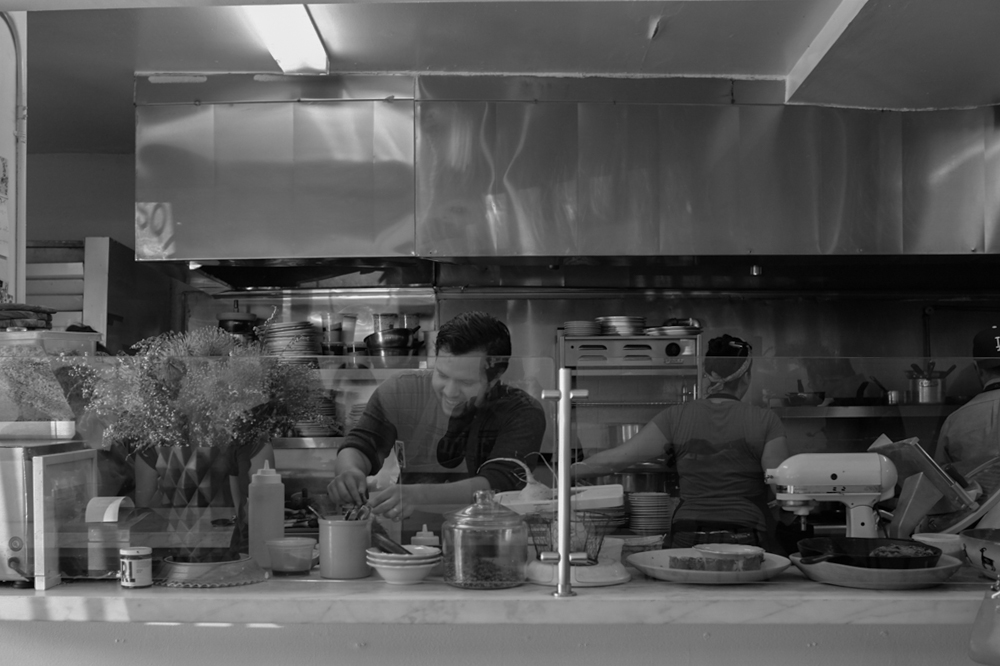 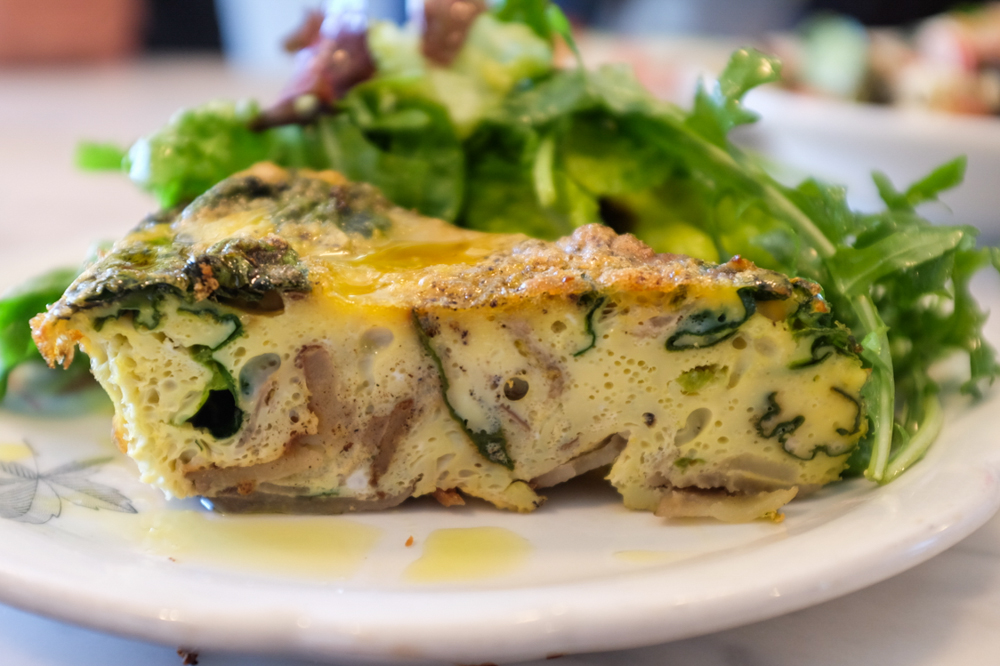 Sqirl is compact, the prototype for small Southern California restaurants: a collage of metals, woods, and white surfaces, with inside seating that's either communal or along a counter, and a scattering of tables on a sidewalk patio. It started out even tinier. Chef-owner Jessica Koslow, who began her business making sublime local fruit jams and selling them at farmers markets, expanded the space last summer.

There is a line to order and it moves glacially. But everyone around me looks unusually content while they eat. The chalkboard menu lists both breakfast and lunch menus. It includes brioche toast with sweet or savory toppings; salads and a Kokuho Rose brown rice bowl with sorrel pesto, preserved Meyer lemon, black radishes, and feta; and more substantial mains like roast chicken and lamb tagine.

I'm ornery with hunger and greed by the time I reach the front of the line and order a toast with jam—choosing all three options of blueberry-rhubarb, blood orange marmalade, and strawberry-rose-geranium— as well as a farro salad, a slice of quiche, and a macchiato.

I didn't realize the kitchen slathered the jam right on the toast: My slice looks like a flag to a nation I'd gladly pledge allegiance. The salad is a pile of greens, radishes, cucumbers, chewy farro, and tangy sheep's milk feta, made bracing with a lemony vinaigrette. Thin potato slices give bite to the gossamer quiche. I feel nourished and energized after the meal; after visiting most restaurants I simply feel stuffed. Sqirl is literally the neighborhood restaurant of my dreams. I would happily eat this cooking daily.

Email Bill at bill@eater.com and follow him at @BillAddison.
Best New Restaurants