Eater's continuous James Beard Award coverage from the David H. Koch Theater at Lincoln Center in New York City starts now! The Beard Awards are the highest honor for food and beverage professionals working in North America. Here's the list of tonight's nominees. Updated: The liveblog is over, here's the complete list of winners.

Calm before the storm at Lincoln Center [Photo: Hillary Dixler]

6:06 Nothing's happened yet. There's still a mob of people waiting to go in outside the theater.

Now they're herding everyone inside and only five minutes after the event was supposed to start. This is going to take some time.

6:12 In the meantime, here's the menu of what attendees will be eating tonight.

My seat at the @beardfoundation awards. Glad I was born at high altitude. #jbfa2014 pic.twitter.com/HxKthf7iPU

NO SELFIES WITH BLOOMBERG #jbfa pic.twitter.com/JTvcqGdt6U

6:18 Bloomberg is here. No large sodas in sight.

6:25 The festivities begin and James Beard Foundation President Susan Ungaro is on stage thanking the lengthy list of sponsors.

6:29 Host Ted Allen is now on stage talking about chefs who play instruments and making jokes about hipster chef bands.

6:32 Mario Batali is now on stage talking about the menu for tonight which is music-inspired.

6:35 There's a preview for a film about James Beard.

6:40 Todd English is on stage presenting the award for Rising Star Chef of the Year

6:49 First America's Classic inductee is Sokolowski's University Inn which has been around since 1923. Here's a great video of the restaurant.

6:55 WINNER Outstanding Bar Program: The Bar at the NoMad Hotel. Beverage Director Leo Robitschek sweetly thanks his mom and admits he's a lot more sober than when he won the award last time.

7:02 Bloomberg is here to present the Lifetime Achievement Award to Sirio Maccioni and jokes about opening a Mexican restaurant with him.

7:14 Pretty sure Garrett Oliver is wearing a green velvet suit. He deserved to win just for that alone.

7:16 Barbara Lynch and Daniel Boulud are too blind to read the teleprompter so they are reading off of their phones. Lynch drops a couple of swear words.

7:21 WINNER Best Chef Northeast: Jamie Bissonnette, Coppa. Excellent acceptance speech: "I'd like to thank my father for putting up with all the dumb shit I did as a kid."

7:24 First half of the Who's Who Inductees: Journalist/food writer Edward Behr, chef/restaurateur/man with beautiful hair John Besh, chef and restaurateur David Chang

Will they play The Who for the Who's Who of Food and Beverage?

7:33 Pretty sure they're playing Smash Mouth as Patterson makes his way to the stage

7:40 Carla Hall does taco night every week with Mario Batali.

7:40 They are playing an instrumental version of Get Low by Flo Rida. Seriously. "Apple Bottom Jeans and boots with the fur" is now stuck in everyone's heads.

So many congratulations to all Beard winners but especially my good friends and heroes @dcberan @dcpatterson and all other chefs named DC.

7:49 This pig is chillin' at the iberico carving station in the media room.

#jbfa wow, Holly Williams and Chris Coleman of Kings of Leon playing for the awards ceremony.

7:55 Apparently there is a fancy musical performance going down. Hoping it involves what appears to be the theme of the night: random chart toppers from the 90s and 00s

8:06 MARTHA is making an appearance tonight.

8:15 Who's Who inductees don't give acceptance speeches for some reason. Caught a brief glimpse of John Besh. His coif is as lovely as ever. 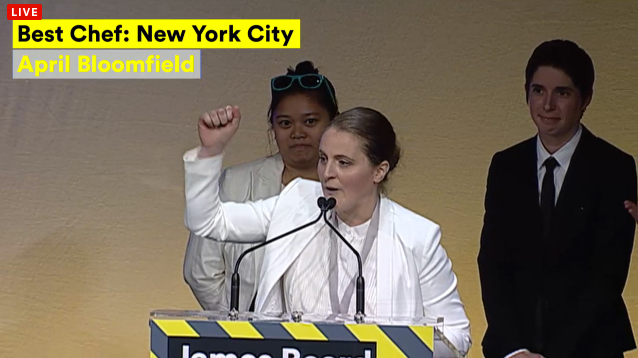 8:28 The term "foodies" has been dropped twice tonight.

Makes them tender and moist, protein dries out ! RT. @ChrisGill9: @Mariobatali a simple question, why put breadcrumbs in meatballs?"

8:41 Batali still finds time to answer cooking questions in between giving out awards.

8:43 Humanitarian of the Year: Restaurateur Matt Haley. "My life is no longer about the center of the plate, it's about how I am involved in my community, locally and globally." On the culinary world: "I'm a member of the most compassionate, caring industry in the world."

9:07They are playing an instrumental version of "In Da Club" as Lynch walks up to the stage.

9:08 Lynch is very visibly moved by the honor. This is the second year in a row that a woman has won.

9:17 Paul Kahan doesn't agree with one of the winners.

9:20 Silverton is the 4th woman to win the Outstanding Chef award.

9:22 Someone on live cast shouts "Let's get out of here." Crowd and hosts agree. And that's a wrap. Expect a very hungover restaurant industry tomorrow.

Updated: The liveblog is over. Here's the full list of winners.