Growing up in a farming family in Fort Atkinson, Wisconsin set the early groundwork for Sam Kincaid's future in baking. From an early age, she was inspired by her father's career as a vegetable farmer, which later led to her love and appreciation for local and seasonal produce. In 2010, without much prior experience, Kincaid landed an opening stage position at Tim and Elizabeth Dahl's Nostrano restaurant in Madison, WI, and in less than a year and a half they promoted Kincaid to full time pastry cook. After two and a half years at Nostrano, she and husband Jon Nodler, also a cook, yearned for a bigger city experience, and the couple decamped to Philadelphia.

Blame it on talent and perfect timing: In 2013 they were both hired aboard Ellen Yin's stalwart Fork restaurant, which blew up last year thanks to new executive chef Eli Kulp, an export out of New York's Torrisi. Yin and Kulp's partnership proved so successful that they've since expanded from one restaurant to three, plus a wholesale operation. Recently, Kulp was even honored as a Food & Wine Best New Chef. Meanwhile, Kincaid has been part of the Fork family since January 2013, and in a quick year and a half Yin/Kulp have promoted her from Fork bread baker to pastry chef responsible for multiple dessert programs at three of Philly's hottest restaurants (Fork, High Street on Market, a.kitchen), in addition to a separate wholesale division, all at the age of 29.

Says Kulp, "Sam is a total ninja. She is one of the most dedicated chefs I have ever had the chance to work with. Every bit of this recognition is deserved. You won't find a harder working chef than Sam … seriously, she works 100+ hours a week to make sure her product is of the highest quality. She has a very bright future and I'm glad she's on my team."

Below, Kincaid explains what appeals to her about pastry and where she's going with her career.

Why pastry? I think it's the same qualities that I love about farming, which is getting my hands really kinda messy and dirty and turning something rough and messy into something clean and lovely. And I just like the process. Of bread, especially.

Can you tell me about the history of Fork? Fork proper has been open for 16 years. There was an attached cafe but it was really casual. It was just kind of a side note. But High Street on Market is number two. And we took over ... chef moved over to take over the food program at a.kitchen in Rittenhouse Square, kinda a tony neighborhood, and then bread and pastry consult, so we sell our desserts and bread to other restaurants. Essentially it's three restaurants and now we are supplying entirely all the bread and pastry for Rival Bros coffee shop in that neighborhood. 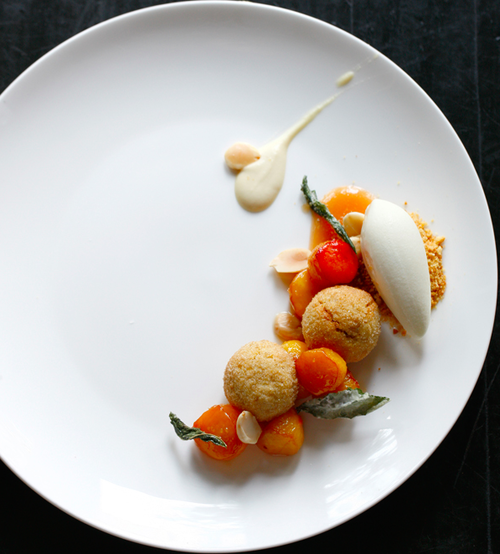 How have your responsibilities changed from one to three places? It's more management of labor and organization and figuring out how to streamline recipes and using different components across the board. It's really been a lot of learning how to manage and simplify, so that quality can be the best it can be.

How do you come up with your desserts? What inspires you? I always go back to this, but mostly really great fruits and vegetables. I really love grains. And the nuances of different grains. And we have a terrific local source for those.

Your menu changes seasonally? Yeah. I, myself, am of Norwegian descent ... and Scandinavian cuisine has been huge for years, but I really skew my taste in that aesthetic.

Can you give me some examples of anything on your menu that is heavily Scandinavian influenced? I really love malt ... right now it's finishing up with the end of winter but brown butter in a tart with malted pickled apples and aged buttermilk. We make the cultured butter in house.

What's the biggest lesson you've learned from working with chef Eli? Not to be afraid to try anything. Every idea is worth investigating and to move it all you just need to try something and work through it. And just scrap it if it doesn't work but you will always learn something from a crazy idea or a mistake. He comes up with some seemingly ridiculous ideas and you think that it's insane but then there's always some hint of inspiration in it. I think he just forces people to feel free to be creative.

Future plans? Being with Eli and Ellen — my husband John and I are so lucky to be in that situation, so we really want to see that through. And then the ultimate goal is to someday open a place with John. We don't know where that is or what it'll be exactly, but we'll definitely work with local farmers ... it will be a beautiful space ... but we're not sure what that is yet.
· All 2014 Young Gun Coverage [-EN-]
[Photos by Jason Varney]