The Road to the 38: Bar Tartine in San Francisco

Share All sharing options for: The Road to the 38: Bar Tartine in San Francisco

Nicolaus Balla spent several of his teenage years in Hungary (where his father has roots) and later homed in on Japanese flavors at Bay Area restaurants where he cooked. But at Bar Tartine, where he's co-chef with Cortney Burns, the menu's Asian and Eastern European influences may not immediately pop out on first glance. One might take note of the rainbow trout and brown rice, kale with sunflower tahini, and sprouted lentil croquettes and think: tiresome hippie food.

Those impressions dissolve within the first few bites. 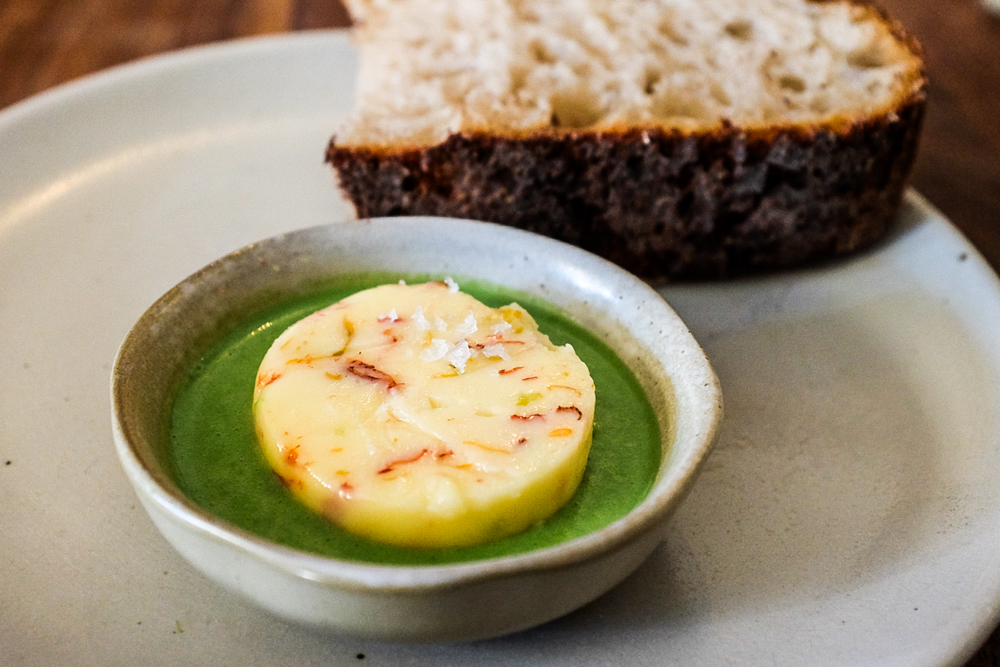 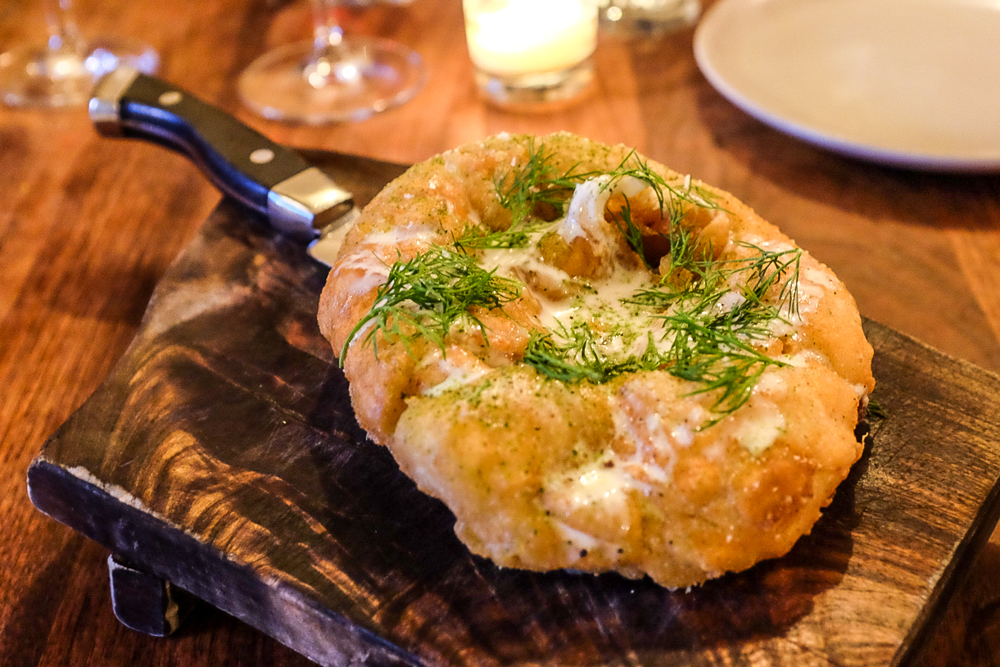 First, there's the bread. Don't flinch at the $3 charge for a few thick slices. This is, after all, an extension of nearby Tartine Bakery, Elisabeth Prueitt and Chad Robertson's game-changer in the Mission neighborhood that bakes the country's most transcendent sourdough. Prueitt and Robertson opened Bar Tartine in 2005 and installed a 15,000-pound oven during a remodel in 2011, the same year that Balla came on board. This bread—tangy, smoky, crusty but with an interior like set pudding—ruined me for others when I lived briefly in San Francisco last decade. I want a hunk of it to be part of my last meal on earth.

There are spreads for the same price as the bread, also worth the cost. A pat of butter comes flecked with chopped nasturtium petals, sitting in a pool of buttermilk verdant from pureed nasturtium greens. A ruddy, glossy paste of lard and paprika is essentially a porcine compound butter.

Balla and Burns are DIY freaks. They've received ample attention for the ways they incorporate fermentation—a vital part of bread-baking and thus a natural extension of the bakery's essence—into the foods they serve, but almost every dish has an element they've also pickled, cured, inoculated, or dried. The lard I mentioned? They render it. The paprika? They make that from scratch as well. Their compositions look simple—and pretty, showered liberally with herbs and multihued sprouts—but quickly reveal beguiling depths. 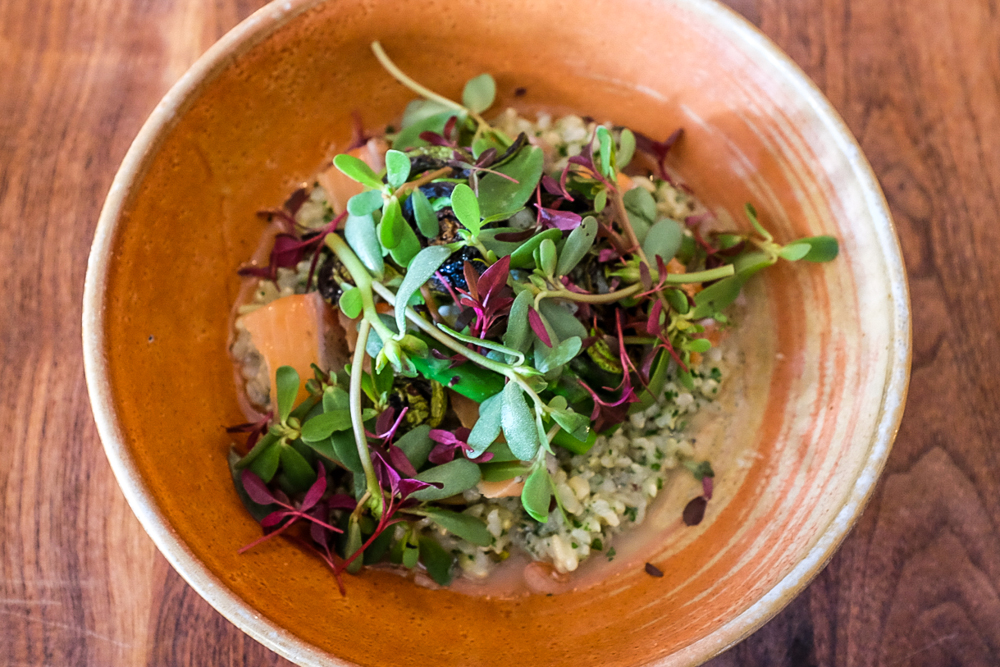 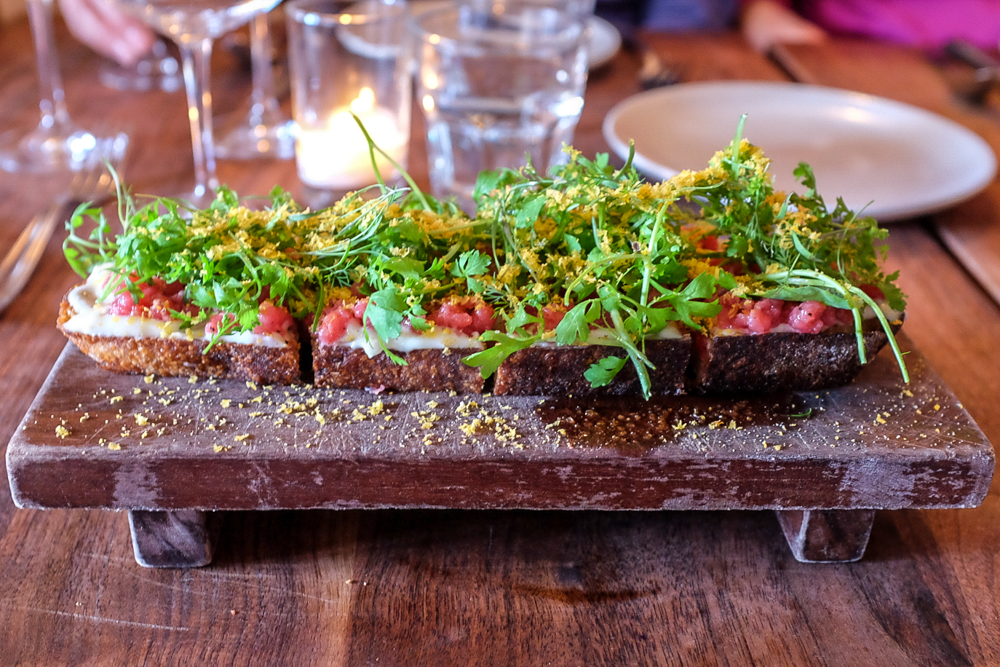 The bland-sounding trout and brown rice is actually an exploration of narezushi, a centuries-old Japanese method of preserving fish and cooked rice. Balla and Burns combine rice and trout with lacto-fermented brine left over from pickling. It was an experiment in which they found that the rice takes on the complex flavor of the brine and the fish absorbs some of the rice's nutty earthiness. They finish the dish by simmering the rice in dashi (the broth that includes fermented bonito, which of course they make themselves from fish that Balla's uncle sends from Florida) and scattering bite-size pieces of the trout on top. The textures are creamy and the tastes are clean yet mysterious.

Beef tartare is a signature dish, itself a meta-fermentation of techniques and cultural collusions. The bread, draped with silky wisps of lean eye of round, is baked with koji, fermented rice cultured with a fungus that's long been used as a base for soy sauce, miso, and other Japanese condiments. It lends a sweet, salty base note rich with umami—a Barry White rumble that evens out the tinnier tones of freshly shaved bottarga. For creaminess and further harmonics, the bread is slaked with a sauce of shio-koji (a salty version of koji, which I'm banking will be a hot ingredient nationwide in the next few years), pureed potatoes, butter, and beef fat. Presented on a wooden board, the tartare resembles Danish smorrebrod, but the Japanese overtones propel it into a unique dimension all its own. 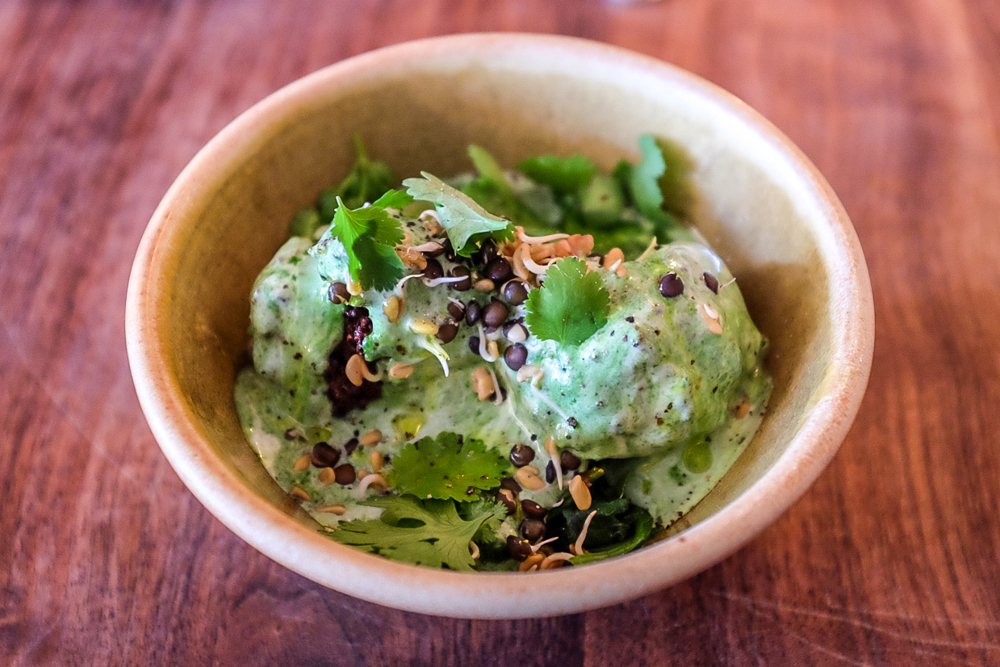 These sound complicated, but they are immensely comforting to eat, which is why this cheerful, charmingly cramped space on busy Valencia Street is always packed. Know, without thinking too hard about them, that similar refinement and energy go into pleasures like langos—a puffy Hungarian potato bread spiked with sour cream, garlic, and dill—and smoked potatoes with black garlic and an aioli often sharpened with pickled ramps. Spinach, beet sauce, yogurt-like kefir, turmeric oil, and bright cilantro chutney bring substance and zing to the sprouted lentil croquettes. The dish hints at Middle Eastern flavors, the next region that Balla and Burns are gazing toward for inspiration.

Bar Tartine's desserts—well, they sparked quite the conversation at my table of four. The kitchen avoids white sugar, finding it one-dimensional. I'm down with that, but I found the fermented notes in the creations like steamed black rice koji cake and a cheesecake made from astringent farmer's cheese a bit jolting. The friend at the table who tends to avoid dessert liked them the most. I prefer cakes and other treats that aren't too sweet but that have satisfying degrees of salt or tartness. In these the sour taste dominates. Something as straightforward as a bowl of ripe, glorious California fruit with homemade yogurt and honey would fall in line with the aesthetic. Or a gentle fruit soup?

Burns acknowledged in a phone conversation that the koji cake in particular was challenging for some palates. She and Balla are ever-curious cooks who swap menu items constantly. They've created such a singular culinary microcosm, I've no doubt they'll conjure a sweeter ending to their meals.

Our review of Bar Tartine