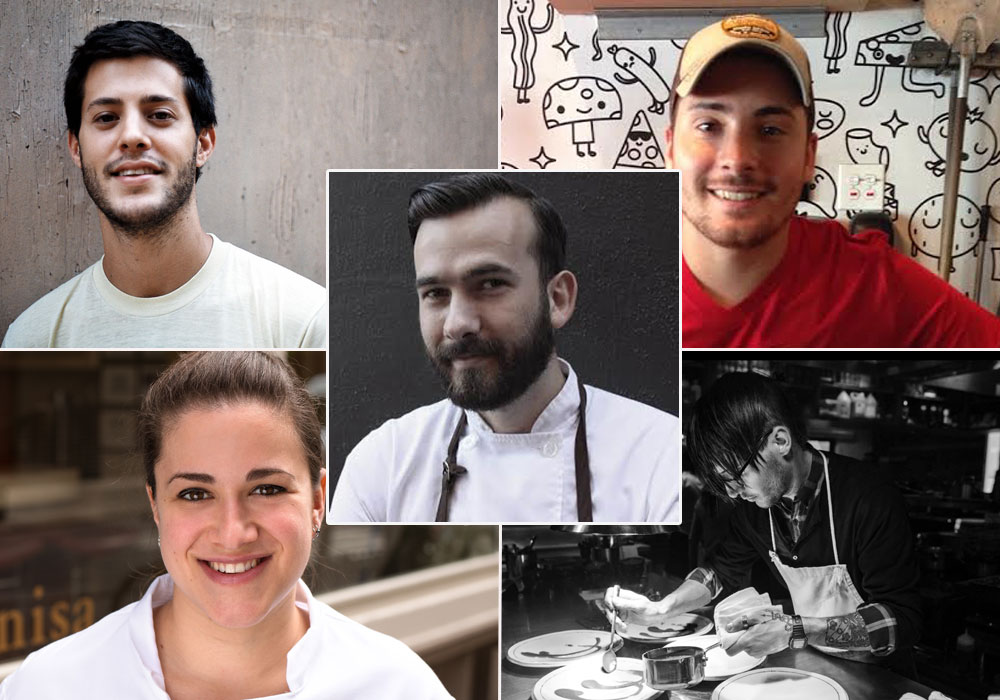 Mary Attea, 30 and a chef for under five years
What she does: Chef de cuisine, Annisa, New York
Why she stands out: Per Annisa's chef/owner Anita Lo, "Under her care, Annisa earned a third star from the New York Times and maintained its one Michelin-star rating."
CV highlights: Started at Annisa as an intern in 2011 and kept getting bumped up the ranks, from garde manger to the grill to sous chef. Eighteen months ago, Lo created the restaurant's first chef de cuisine job for her.
Why she's worthy of a Young Gun nod: "...Mary Attea has it all—a great palate, a fine eye for detail, exceptional intelligence, a calm, focused demeanor, speed, organization, good business sense, and a creative ability well beyond her years of experience. Mary first came to Annisa as an intern, much like Annisa alumnus and 2012 Eater Young Guns Semifinalist, Titus Wang. She quickly moved up the ranks, mastering each station with ease. I remember Titus saying when we were speaking about one of Mary's earlier promotions, 'Mary? She can do anything.' If this is what she is able to do in just under 3 years experience at Annisa, she is certain to make big waves in the future. —Anita Lo

Rob Jacob Drennan, 25
What he does: Chef de partie, Qui, Austin
Why he stands out: As one of his public nominations noted, Drennan "Killed it at Uchiko. Killing it at Qui."
CV highlights: Started out as a line cook before working as lead cook at the Renaissance Hotel and then as a sous chef at The Metro Wine Bar, both in Oklahoma City. Staged at Blanca in New York and Alinea in Chicago. Hired as tournant at Uchiko in 2011 and moved to Qui in 2013.
Why he's worthy of a Young Gun nod: "I recently promoted him to chef de partie here at Qui. He has an amazing touch with food. I can make a plate, show him the plate and he can make it that much better." —Chef and Eater Young Gun committee member Paul Qui

Steve Martin, 24
What he does: Chef de cuisine, Harry's Pizzeria, Miami
Why he stands out: He gets to work at 6:45 a.m. to start braising short rib for pizza, and doesn't leave the restaurant until 11 p.m., when he goes home for a glass of bourbon. (Here's much, much more about his typical day.)
CV highlights: Interned at Naples Yacht Club while in culinary school, and was later hired to work the line and at banquet events. Took at second job at TruLuck's before joining the team as a cook at Michael's Genuine in Miami. Promoted to sous chef at Harry's Pizzeria and given his latest title eight months ago.
Why he's worthy of a Young Gun nod: "...In the last couple of years, we've watched him grow up a lot. [He's] super-creative, hard-working, stubborn, does his homework, reads a lot, takes criticism well (that's a big one for me). He'll be a superstar chef." —Chef/restaurateur and Eater Young Gun committee member Michael Schwartz

Nick Muncy, 25
What he does: Pastry chef, Coi, San Francisco
Why he stands out: Name-checked by chef and Eater Young Gun committee member Michael Voltaggio for translating Coi's focus on farming and vegetables into the dessert program. As he puts it, "The whole meal makes sense from beginning to end."
CV highlights: Began as a savory cook at the Fairmont Hotel in Newport Beach. Graduated culinary school in 2009, and got a job at Cyrus, where he eventually switched over to pastry. Did a stint at The Bazaar before moving on to Saison, where he worked with pastry chef Matt Tinder. The two moved to Coi, and Muncy was promoted to pastry chef there in 2013.
Why he's worthy of a Young Gun nod: "Nick produces consistently delicious food. His work ethic, attention to detail, and creativity are a vital part of our kitchen." —Chef Daniel Patterson, Coi

Nick Wiseman, 27
What he does: Partner, DGS Delicatessen, Washington, DC
CV highlights: Started in the kitchens of DC at 15 at restaurants like Marcel's by Robert Wiedmaier. Went to UC Berkeley and continued to work in the back of the house during his summer breaks. Moved to New York and cooked at Alto for a year and the now-shuttered Fiamma. Realized his hometown of DC was lacking a proper deli, and in 2012 he and his cousin David Wiseman opened DGS Delicatessen.
Why he's worthy of a Young Gun nod: "Nick strikes me as a smart entrepreneur. DGS is stellar and seems so well run. I also wish I could eat there for lunch every day." —Eater features editor Amy McKeever