The Road to the 38: Saison in San Francisco

Share All sharing options for: The Road to the 38: Saison in San Francisco

It's the thirteenth course of my meal at Saison, and my brain can't quite reconcile that I'm listening to Billy Ocean's "Caribbean Queen" while nibbling on a crackly chicharron made from the skin of sea cucumber. The song hurls me back to my Dorito-munching, VH1-watching teenage self—a kid whose only contact with chicharrones was bagged pork rinds from Southern gas stations, and who couldn't possibly imagine a version being fashioned from a slimy marine creature. The relentlessly eighties playlist messes with my head the whole evening. My table sits ten feet from the gleaming stoves: I watch the cooks in one of San Francisco's most serious kitchens maintain their stony expressions even while Lionel Richie's "All Night Long" bounces overhead. 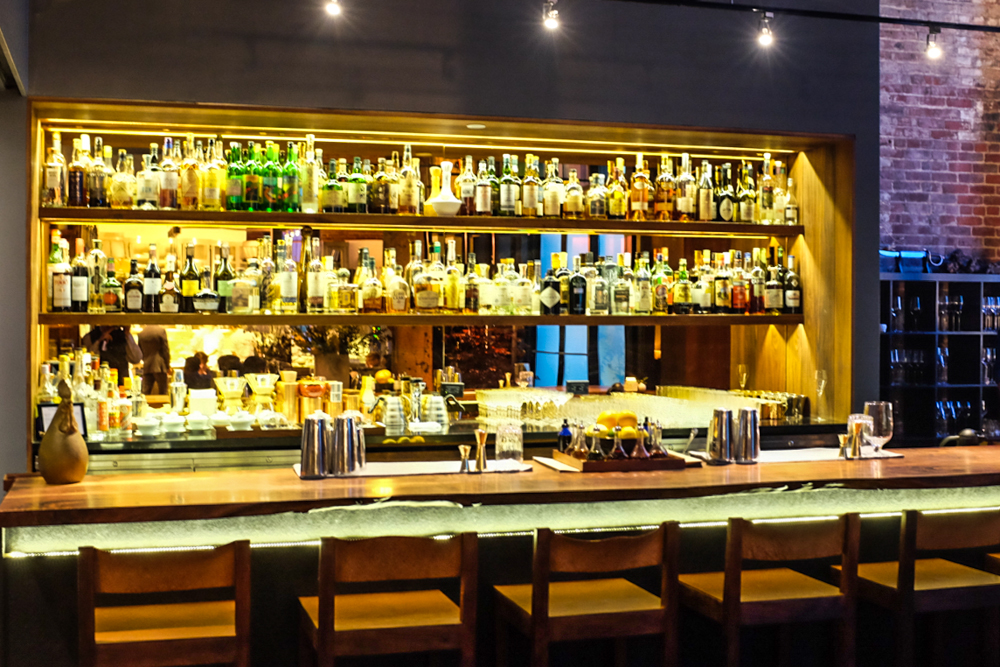 The bar at Saison

Despite the throwback music, Saison is the country's most modern iteration of an ultra-luxury restaurant. Executive chef and co-owner Joshua Skenes didn't spend years working his way through fine dining strongholds. The 34 year-old attended the French Culinary Institute in New York and then worked briefly for Jean-Georges Vongerichten and with chef Anthony Ambrose in Boston before moving to California in 2005.

Skenes and sommelier Mark Bright (both had been employed by chef-restaurateur Michael Mina) began Saison in 2009 as a Sunday-night-only pop-up in a former stable in the Mission neighborhood. At the time Skenes was also serving lunchtime sandwiches, soups, and salads from food cart he called Carte415. For Saison, Skenes and Bright started out offering a multi-course meal for $60, with $30 optional wine pairings. Even then there were glimmers of what Saison would become: Guests were greeted with a glass of bubbly. The kitchen was open and relaxed enough then that diners could occasionally mosey through. Stunningly prepared seafood and vegetables, still Skenes's primary palette, anchored the menus.

The restaurant's evolution—and its owners' ambitions—went into warp speed. When word spread, reservations were often booked two months in advance. Skenes and Bright began serving three, four, and then five nights a week; within a year they leased the space and the pop-up became permanent. A hearth and a Molteni stove (essentially a cooktop Lamborghini) were installed. Last year the restaurant moved to an elegant 1800s building that once housed the California Electric Light Company in SoMa, near AT&T Park. Its industrial starkness received some initial chilly reception, but a recent remodel that included hardwood flooring for the kitchen and carpeting in the dining area helped warm the space and boost its local star rating.

At every step, Skenes's cooking intensified, the ingredients grew more rarified, and the prices escalated to match. Last year the restaurant offered a fixed-price menu for $298 per person in the 18-seat dining room, with a truncated $88 tasting menu in the bar. At the moment there is no bar menu, and in the dining room guests select from a $248 base option or the $398 "discovery menu." The optional wine pairing? Also $248, though the staff will also suggest several by-the-glass options to carry the meal. Of course there is also Bright's wine list, so massive now at 3,300 bottles that there are separate tomes for whites and reds.

Easily one of the most expensive and remarkable meals of my life.

I wanted to experience the full measure of the restaurant's powers, particularly to compare other tasting menus I tried on my trip to San Francisco, so I opted for the discovery prix fixe and the wine pairings. With one cocktail, tax, and tip, it was easily the most expensive meal of my life. I dined solo, and the bill came to $863.91. 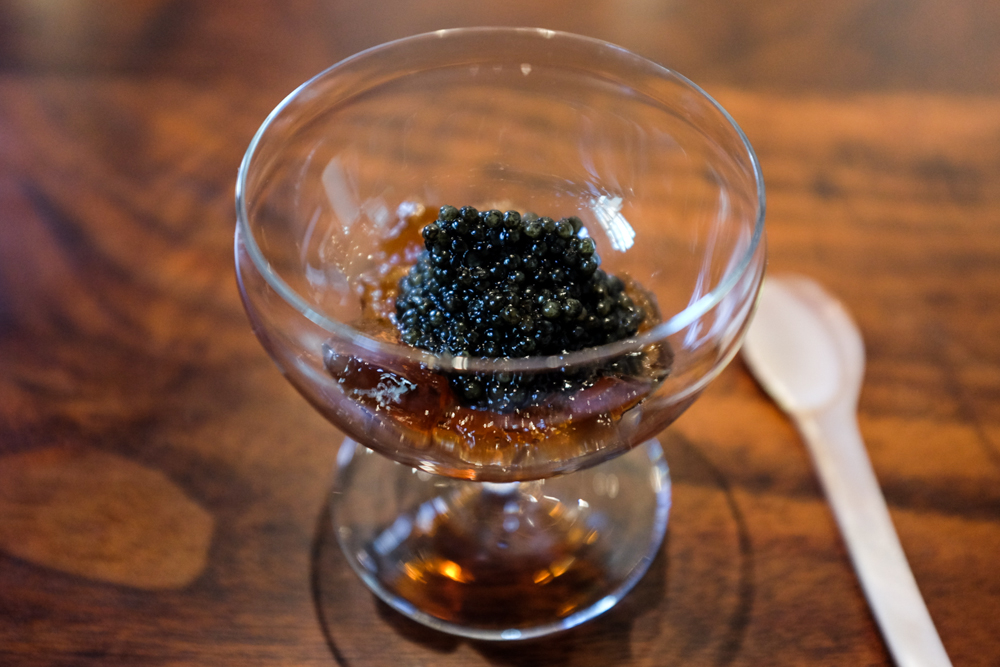 The meal was also easily among the most remarkable of my life. After a tea of Meyer lemon and herbs, a hand towel, and a splash of Champagne, the first course arrived as an indulgent balm to banish the thoughts of money—a glass goblet filled with a liberal tablespoon of white sturgeon caviar. It came over cured, smoked sturgeon belly and a gelee made of the fish's grilled bones. The smoked and grilled elements perfumed each spoonful of caviar without overwhelming it, and the flavors summarized the primordial themes in Skene's cooking: ocean, fire, distillation.

Next came a riff on Provençal barigoule, artichoke with scallop in a gently astringent, palate-priming bouillon steeped from wild thistle. Then, a succession of one or two bite seafood dishes that danced the line between raw and cooked: a square of Japanese butterfish, one edge quickly pressed against coals; bonito basically waved over heat and served with a dot of black vinegar made from the fish's head; an angular piece of pickled horse mackerel on thin toast with crème fraiche. Two marvels followed: roasted abalone in a sauce of its liver and capers, topped with threads of laver seaweed, and then one perfect lobe of uni lolling over a piece of toast from unrivaled local bread company Tartine, the bottom soaked in vegetable juice.

How to define the food? Maybe we should just call it Skenesian.

How to define the food? You don't really. Like other brilliant, hell-bent American chefs of his generation, Skenes draws techniques from cooking traditions around the world and weaves them into a personal mosaic. With its nods to Asian and French cuisines boosted by those warm campfire overtones that our nation adores, I suppose the default label is Californian. Maybe we should just call it Skenesian.

Speaking of which, Skenes had just returned from his honeymoon in Japan and wasn't in the restaurant when I dined there. But his team, led that night by executive sous chef (and Eater Young Gun) Mitch Lienhard, executed the dishes with clinical precision. The cooks occasionally stepped away from their stations to deliver dishes to the tables themselves, an unusual breach of the fine-dining fourth wall that I appreciated, particularly considering that the kitchen is on full display like a stage set. 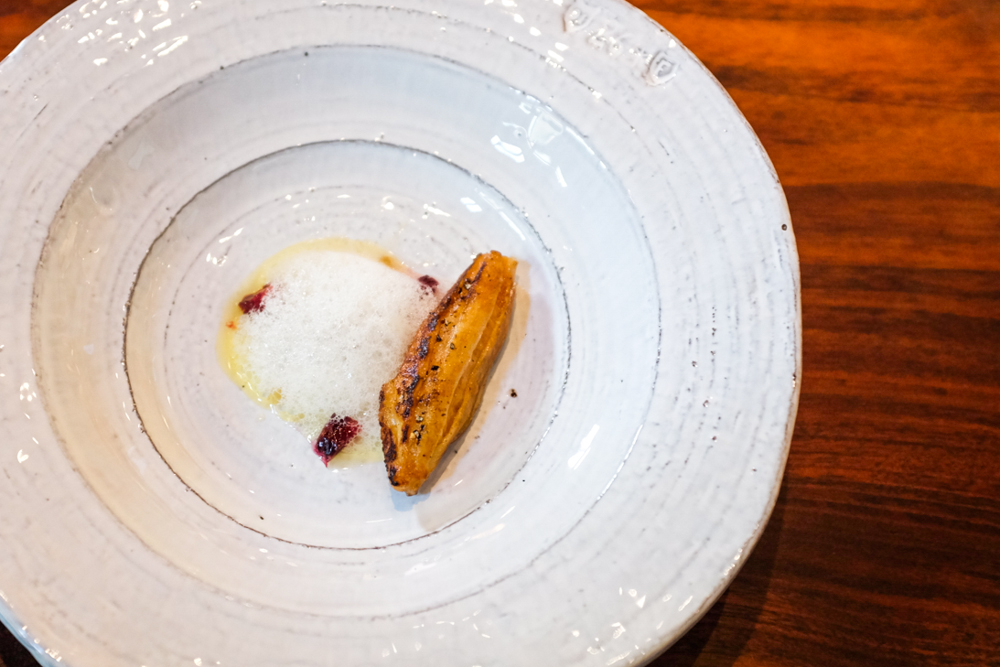 As the meal progressed, the two-dozen dishes waxed and waned between the familiar and the curious. Smoked trout and an oyster swathed in Krug sabayon proceeded two sea cucumber dishes: Before the chicharron (made by drying the leathery skin and then frying it in oil until it puffed up), there were sea cucumber "ribs"—interior muscles grilled and served in a frothy sauce of innards lightened with cured citrus peel. It went down much easier than it sounds, particularly because grilling firmed the sea cucumber's usually gelatinous texture. 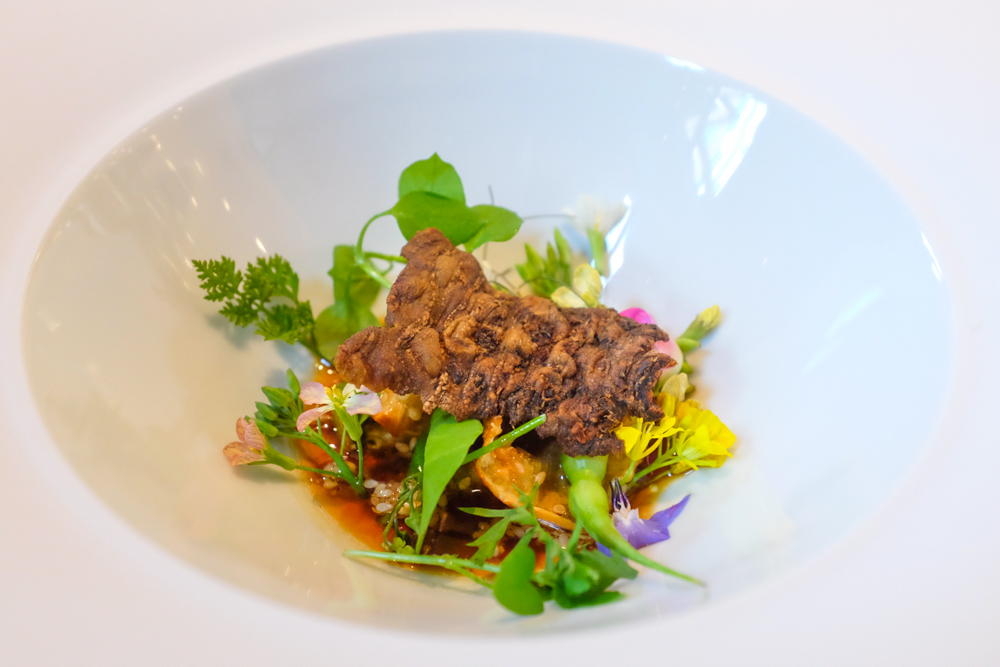 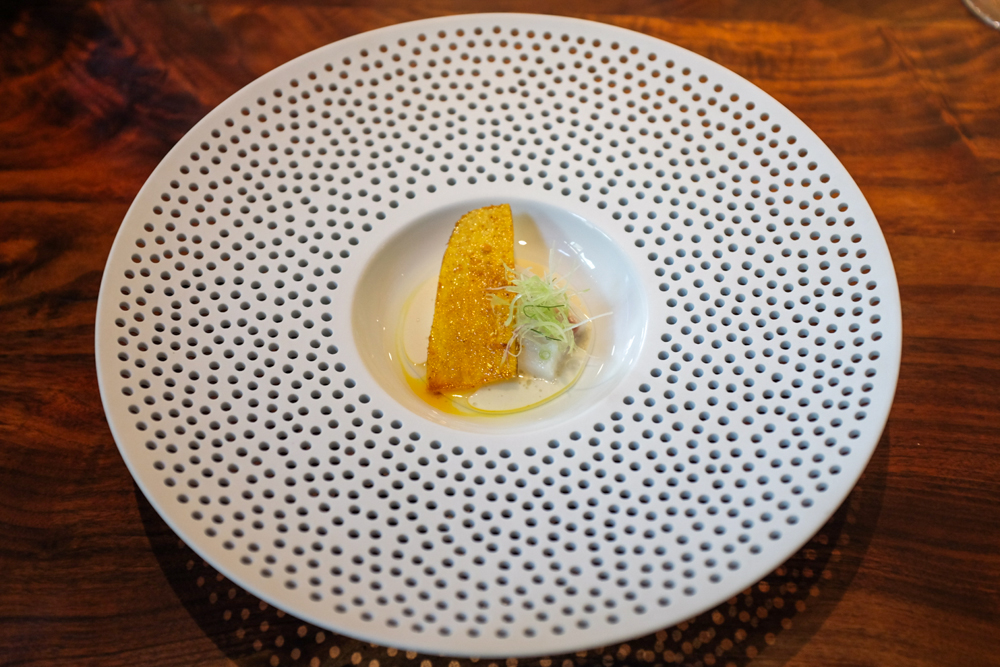 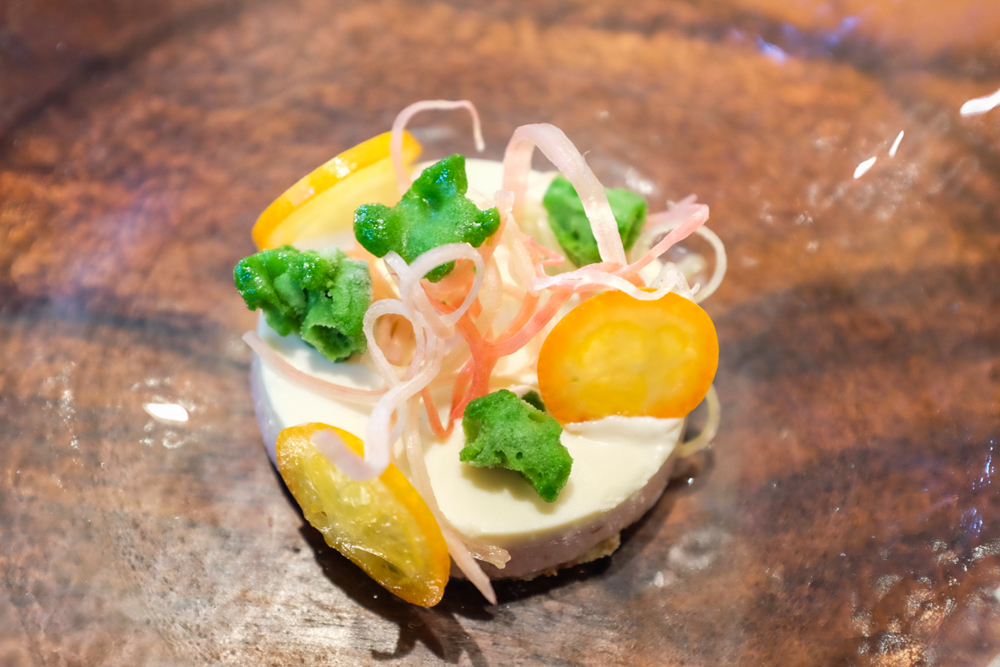 A Gallic-inspired "white asparagus royale"—a custard of stems under a foamy cloud, with grilled tips, smoked pine nuts, young pine shoots, and clementine—was followed by halibut poached in seawater (a meditation on the fish's origins; very Skenesian) and then grilled with swarnadwipa, an Indonesian curry powder. The fish sat in a shallow pool of yogurt sauce tinged with coconut oil. In another creation, herbs and flowers from the restaurant's plot of land in Marin County cradled a gnarly hunk of celeriac "crackling." It looked like an ogre in the Garden of Eden. Six Parker House rolls sweetened with brown butter appeared; I scarfed down three and had to push the rest away.

Beverage pairings mirrored the food's Eastern-Western push-pull: There were four whites from France's Loire Valley among the wines but also sake and red rice ale from Japan with the early seafood preparations.

The homestretch: a savory cookie showered with foie gras snow and stuffed with minced livers, and wood pigeon scented with coffee beans paired with paper-thin circles of pear dusted with red peppercorns and nutmeg. And then several desserts, the centerpiece of which was pastry chef Shawn Gawle's black walnut soufflé, gossamer and not too eggy but rich with the nut's tannic edge. 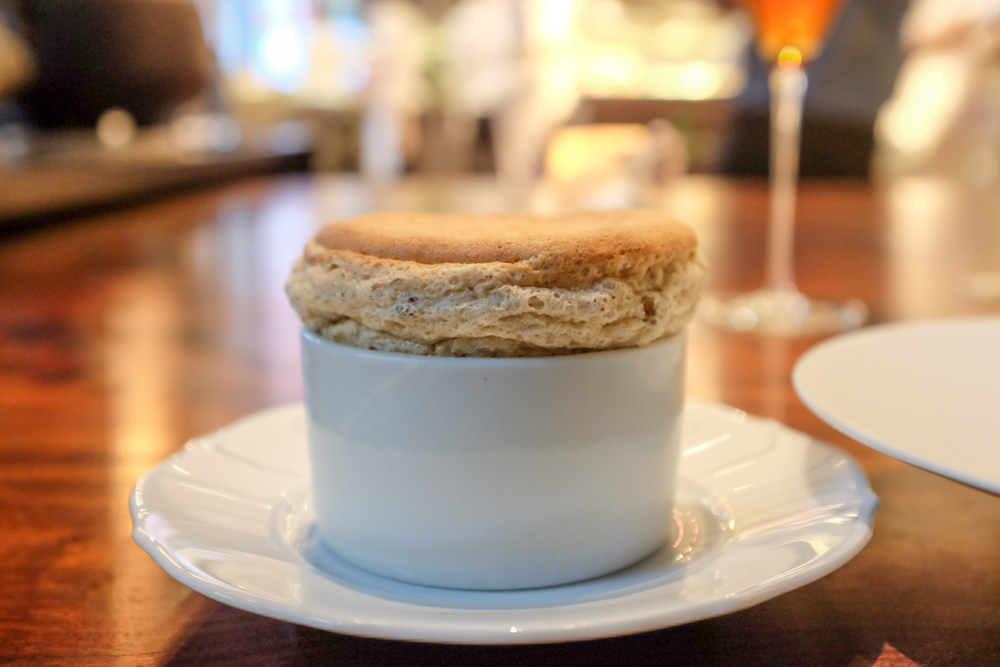 My meal lasted three-and-a-half hours; I was never bored and the service staff kept me gracious company. I drifted into a balmy San Francisco twilight, grateful that Uber is so ubiquitous in the city. I had hoped the last eighties tune upon my exiting might have been a bookend of sorts, something like Billy Ocean's "Get Outta My Dreams, Get Into My Car." It turned out to be "Almost Paradise" from the Footloose soundtrack. Appropriate enough.


Saison
178 Townsend Street, San Francisco
415-828-7990
website
Open Tuesday-Saturday, 5:30-9:30 p.m.
How to get in: Look for a reservation at least several weeks in advance on OpenTable; it's usually possible on weekdays to find a time slot either early or late. Note the cancellation policy: Provide a week's notice or the restaurant will charge parties the full price of the meal. It's extreme, but so is the chef.
What to expect: There is no set menu, and diners aren't presented with a list of dishes until the meal's end. As of spring 2014 the restaurant has two fixed-price options: $248 or $398. Anticipate a multi-course meal, full of flavors that evoke both the East and the West, rife with the world's most luxurious ingredients.
What to drink: Mark Bright's collection of the 3,300 wine bottles includes labels from all over the world but is especially gratifying for Burgundy geeks with deep pockets. There are around two dozen wine options by the glass. The culinary cocktails also deliver: For something to start, try the herbaceous Amerigo with amaro, Cocchi vermouth, and Byrrh Grand Quinquina.
Bonus tip: Valet is $20, though the fee goes up to $30 if the Giants are playing a home game at AT&T Park. There is also plenty of street parking, though if you order the $248 wine pairing a taxi or Uber is advised.

Our review of Saison