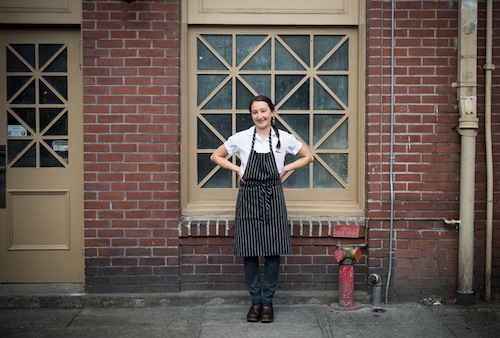 "...You don't actually need dessert to survive, you know?" Nora Antene, 29, says, mid-interview. "So it can be more of a thing you have fun with." The Eater Young Gun semi-finalist is a pastry chef who also believes being on the sweet side of things demands she put in all the more effort to create dishes that will intrigue and delight diners. That's what she's doing at James Beard Rising Star winner Gabriel Rucker's Le Pigeon and at Portland's pop-up Limited Company. Her plates that are visually interesting, often free-form and occasionally fanciful, like a recent mango gargouillou.

It seems fitting that Antene wound up at a modern interpretation of a bistro. She grew up in a "big, food-oriented family" (she's one of nine kids...yes, nine), and nabbed a degree in French before heading to culinary school in 2008. There, she focused on the savory, only dabbling in desserts during an internship at L'Etoile Restaurant in Madison, Wisconsin, before taking a job as a pastry assistant at MK in Chicago.

"I fell in love with pastry there, and just stuck with it," Antene says. She stayed at MK for a year, and then moved out to Portland, where she got a job at Rucker's Little Bird Bistro before moving into her current role six months ago. Here, she talks with Eater about cooking in a smaller city, running a pop-up with her boyfriend and the decision to drop French in favor of flour.

What's your style? I guess it's a little cliche, but I like to use things that are seasonal and regional in Portland as a guide. After that, I like to do things that are kind of whimsical. And above all, really delicious. I'm not reinventing, exactly, but taking a more playful approach to something you may have already had. But I would say I'm still developing a style...

And I want to echo Gabe's menu in a way. I try to make it a seamless transition from savory to sweet, so when you get your dessert, you're not like, oh, I'm at a totally different restaurant. I like to do desserts that are kind of...show-stopping, especially at a place like Le Pigeon, where the place is so filling, when dessert comes, you have to try a little harder to convince people to eat a little more.

You have a degree in French...did that influence you at all? It did in that I got to spend semester in Paris, when I was in college. I'm still kicking myself, because I didn't actually eat anywhere notable, besides the little cafes and things. I was definitely inspired by the markets. There was a big market outside my apartment that I went to almost every day. Even if I didn't buy anything, just to walk through and see everything was pretty cool...just this whole other food culture. In that way, it's been pretty helpful.

Did you think you'd become a chef? I grew up in a big, food-oriented family. We cooked all of the time, and I read a lot of Gourmet, Ruth Reichl, and M.F.K. Fisher. Food was central, but working in a restaurant wasn't on my radar. Throughout college I found myself interested in my studies but unable to pick a career from among them. Aside from French, my primary concentration, my favorite classes were art and food science courses. Meanwhile, I had a rolling pin, a bag of flour, and vanilla in my dorm room closet...it should have been obvious to me?

And what about your time in Portland? I'm so amazed by how many small restaurants there are...it's amazing, you see restaurants open every day and you think, 'how can they all exist?' But...it's a nurturing place. I could have stayed in Chicago, but I might still be a pastry assistant. I could go a lot farther a lot faster here, just because it's smaller.

Tell me about your involvement with the pop-up Limited Company.... My boyfriend, Andrew [Mace], is one of the sous chefs here and he started doing this about a year ago and asked if I wanted to help with it (before we were dating). He thought that we might think similarly, even though we didn't really know each other at the time. He has a really awesome style. It's fun to do that, too, because we can really do whatever we want to do. We don't really have any guidelines.

What do you see for yourself in the future? I'm not sure. I know I want to stay in restaurants. I've been having a lot of fun baking bread in the past year...I have a sourdough starter and I've been trying to bake bread a couple of times a week. That's something I like, but I don't think I could ever work in a bakery or own a bakery. I'd like to incorporate that into a restaurant.

I like doing everything, so a restaurant is a good spot for me, so I'm not tied down to one thing. I'll be here for a while, since I just started six months ago, but after that I'm not sure.
—Katie Abbondanza
·All Eater Young Guns Coverage [-E-]