Share All sharing options for: Mesamérica 2014: The Quotable Alice Waters

Yesterday at the Mesamérica conference in Mexico City, legendary Chez Panisse chef and activist Alice Waters hit the stage for a half-hour talk about sustainability, agriculture, and what she calls "the pervasive and toxic global presence" of fast-food culture. Amid her rumination on edible landscapes, community projects, the biggest problems of the modern day, and presidents who were also farmers, Waters dropped gems of prose on the audience. Here now, the Quotable Alice Waters:

On Diana Kennedy: "I can never be anywhere in Mexico, really, without thinking about my friend Diana Kennedy. ... She's gathered and translated a wide range of Mexican recipes and catalogued so many of the traditional ways of cooking. And, at 91, she's still at it. I think I learned everything I know about peppers from Diana. In a sense, she's created a deep, practical library of indigenous Mexican ingredients and practices. It's such a huge treasure chest."

On fast-food culture: "It's distracting us from the real issues. It's causing us to lose a true sense of what a connection to the land feels like, and how that connection feeds us. And if we don't counteract the insidious and almost invisible forces of fast-food culture, I fear that we're lost."

On World War II-era Victory Gardens: "More than 20 million Victory Gardens were planted, and they produced more than nine million tons of fresh vegetables and fruits. The Victory Garden movement not only helped our country through a very hard time, but it also helped many people, including my own family, realize we could grow our own food."

On the White House Garden: "I find it incredibly inspiring that in Washington now, the White House has a kitchen garden again after too many years without one… I think any government building anywhere that has a vegetable garden or an edible landscape on its grounds is sending a vital message about stewardship of the land." 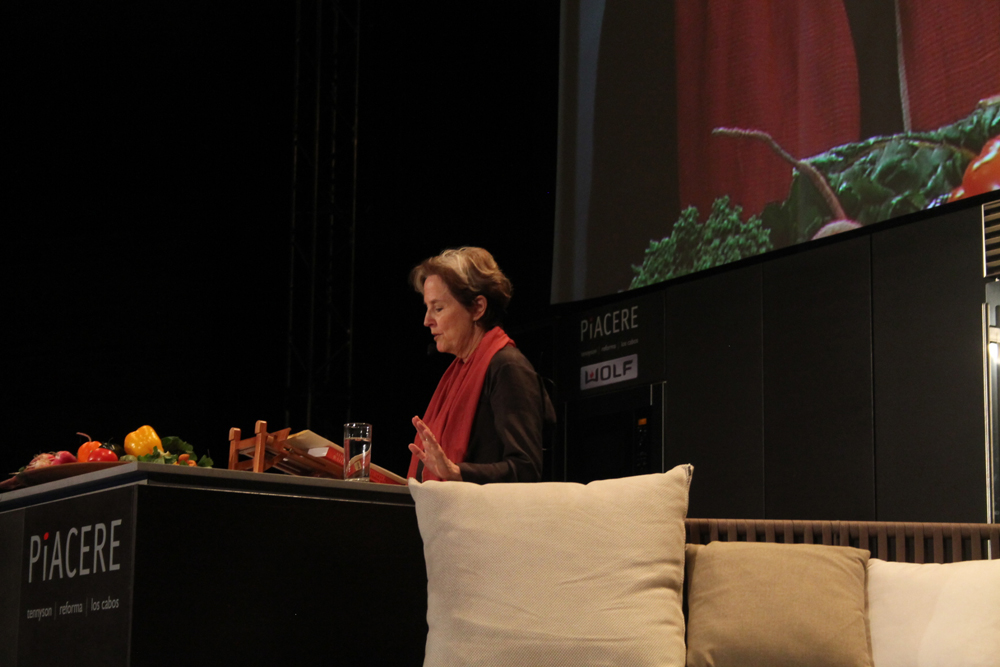 On the network Chez Panisse has cultivated: "This fostered our own kind of underground sustainable economy, free from the constraints and contradictions of the larger, more pervasive industrial economy. Besides bringing delicious food into the restaurant, this network also connects everyone: cooks and patrons alike, to the land. And it makes us all by association stewards of the land."

On the lack of organic feed for animals: "You might be raising animals in a humane way, but feeding them non-organic grain is inherently inconsistent."

On food markets gone wrong: Waters talked about food markets that "pretend to be real" and offered the "tragic example" of the Les Halles food market in Paris, which moved to a modern facility and gave priority to international vendors rather than sustainable ones: "This dramatically changed the food, not only in Paris, but all over France." She later noted, "Fast-food culture can invade farmers' markets and fool us into buying products that look the part, but are in fact far from it."

On the Edible Schoolyard project's inspiration from a county jail program: "The garden project was so successful in transforming the lives of its participants that when they were released from jail, they wanted to go back. And so I figured if that's happening in a jail, it could certainly happen in a school."

On the Green Rooftop project in Mexico City: "I find it so beautiful that in a modern metropolis, which was built on top of an ancient Aztec city, very famous for its floating gardens in the lake, that now there are these floating gardens in the sky which are doing so many of the things that I'm talking about: feeding people, forging connections to nature, restoring the environment." 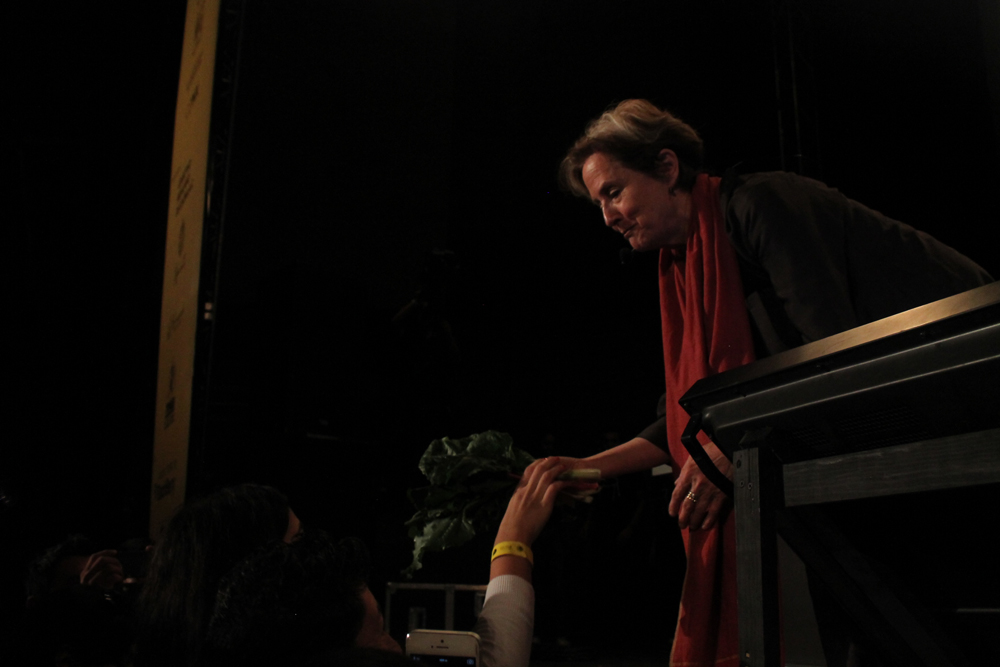 On Ron Finley's "provocative" Green Grass project in South Central LA: "Wouldn't it be great if all cities and towns planted edible landscapes right now when hunger is so prevalent? Wouldn't it be fantastic?"

On how she's still learning: Waters recalled a Slow Food meeting in Puebla when Carlo Petrini said that cooks need to be gardeners and gardeners need to be cooks in order to ensure the stability of our food system. Waters said, "And I always thought that I understood what Carlo meant. But recently, because of my reflections on growing food in my own life, I've come to a much deeper understanding of what that means: We truly are what we eat. And when we eat fast food, we digest not only the adulterated ingredients, but we digest the values of that culture. The values of fast, cheap, and easy. Everything the same. Available 24 hours. … But when we eat slow food, we adopt the values of another culture. The values of the land."

On Thomas Jefferson as "a slow food president" and a farmer-gastronome: "I just love knowing that he planted a thimble-full of lettuce seed every week so that he could always have a salad on his table. Today Monticello, where he lived, is more than a landmark. It's a national treasury of heirloom seeds, a place of enduring values, where I believe the roots of American democracy still thrive. Or I hope they do."

To close it out: "I believe that all of us need to bring back respect and support for these practices and values, not only for the pleasure of our lives, but for the survival of this planet. We cooks and restaurateurs and people who eat with intention, we're on the frontlines. We're the leaders. And we can revive the spirit of the Victory Gardens and inspire a global phenomenon. And if we do this in our cafes, in our food trucks, in our restaurants, in our hospitals, in our jails, our homes, but most importantly in our schools, we can bring everyone back to their senses.

And what a delicious revolutionary idea this is, that by demonstrating the vital link between what we're eating and the land, we can bring about a powerful cultural shift. One that will nourish us and will bring back the meaning and duty to our lives."