The Road to the 38: Three Critics at La Grenouille in NYC

Share All sharing options for: The Road to the 38: Three Critics at La Grenouille in NYC

A slim woman, wearing a red dress and perhaps slightly inebriated, leaned toward us over her Grand Marnier soufflé. Her table was nine inches away. "You guys must be foodies, the way you talk about what's in front of you," she said.

"Don't curse us with that label," replied Robert Sietsema, my colleague. "But we do enjoy eating," added my other comrade, Ryan Sutton.

The three of us, Eater's trio of critics, were dining at La Grenouille, Manhattan's last remaining bastion from the heady days of French haute cuisine. The restaurant opened in 1962 and outlasted gilded contemporaries like Lespinasse (which closed in 2003) and Lutèce (it shuttered in 2004). Its sumptuous room—a trademark extravagance of towering flower arrangements, white tablecloths, scarlet banquettes, heavy mirrors, and the dining room's flattering, drawn-butter glow—remains a sanctuary for the wealthy, attended by tuxedoed servers with thick Gallic accents. 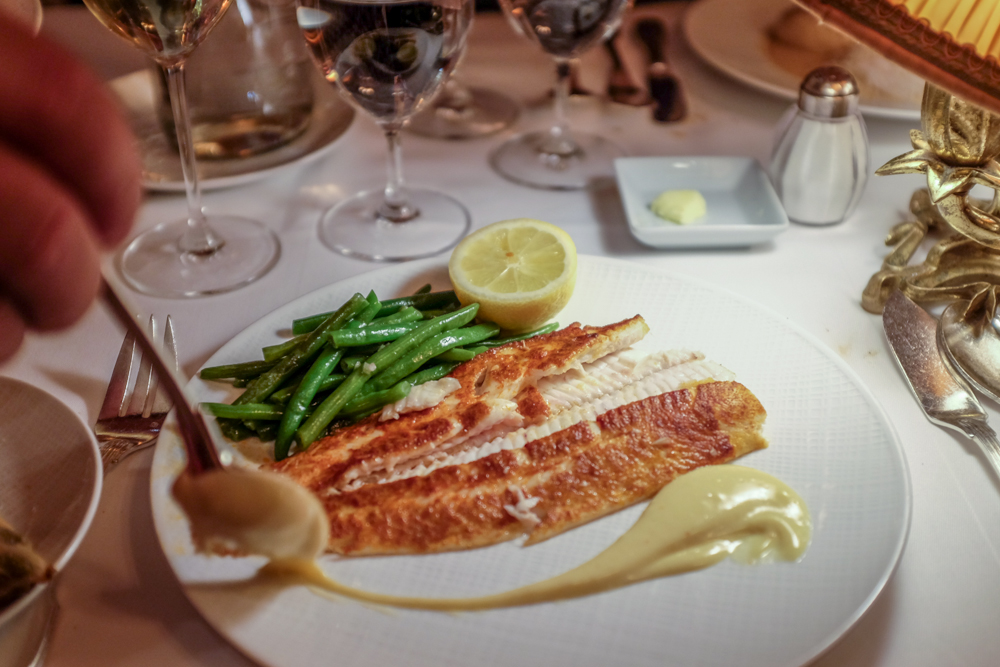 Sietsema, Sutton, and I were bandying emails a month ago, discussing a restaurant to visit together when I'd be passing through New York in early May. We realized that none of us had ever been to La Grenouille. There was also a timely angle: In March, front-of-house manager Charles Masson Jr.—son of founder Charles Sr. and his widow Giselle, who still owns the restaurant—left the place in the wake of a family schism. He's replaced by his younger brother, Philippe. Charles Jr. had presided over La Grenouille for much of four decades; his departure caused a titter among New York society types. (When I emailed the restaurant to ask if Philippe was thinking about making changes, this was the wisecrack response: "He said he plans on putting in a pool hall and bordello.") We three may have had no previous context with the restaurant, but we were still curious about the quality of its timeless (anachronistic?) cooking.

"This is the best smelling restaurant I've ever been in," said Sietsema, motioning to the lilies and cherry blossoms streaming out of huge vases. The maître d' led us straight through the front room of VIPs—there was fashion maven Andre Leon Talley holding court in a blue and white muumuu of sorts—and directed us to a table in the rear. Warm gougères arrived. We gaped at our menus full of yesteryear's rich splendors: lobster bisque, pike quenelles in Champagne sauce with caviar, oxtails braised in red Burgundy, mustardy veal kidney flambéed in Cognac, soufflés, and floating islands. 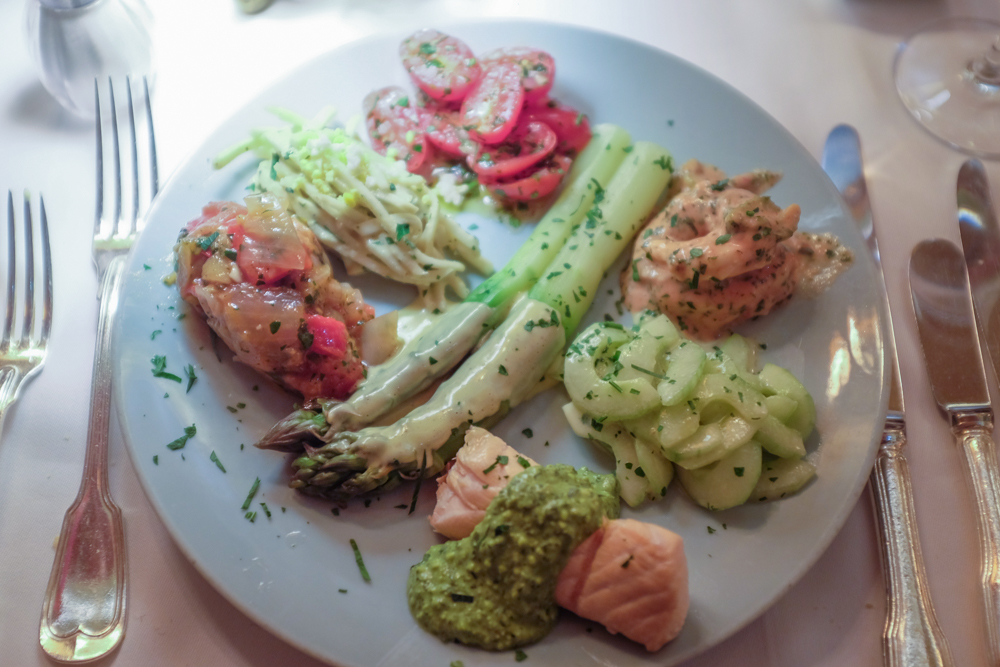 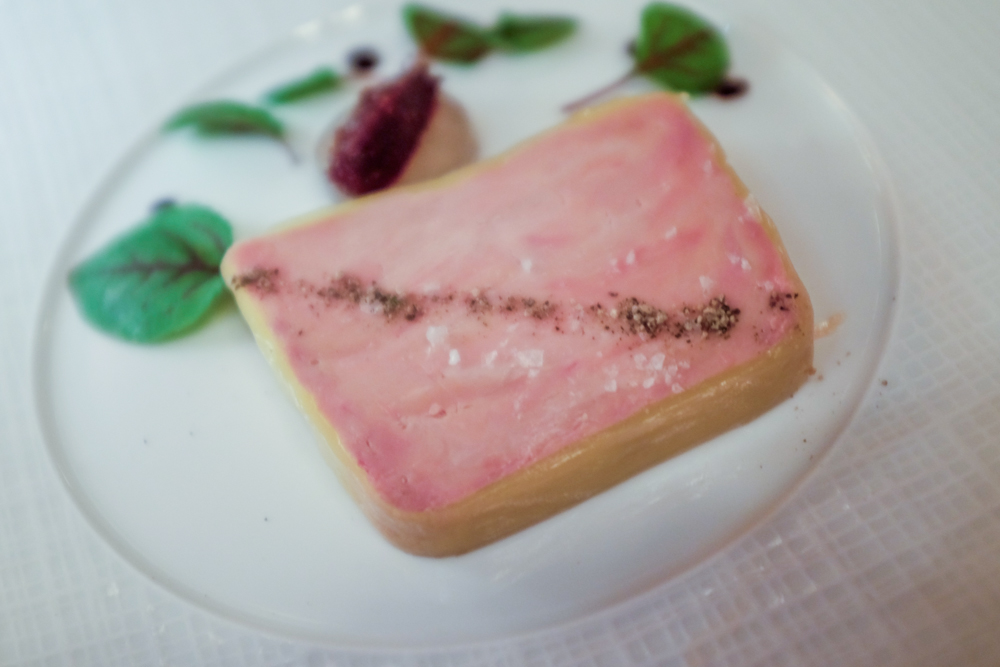 During our meal, the conversation drifted, touching on places we've traveled, the fake names on our OpenTable accounts, and our disparate backgrounds. Meanwhile, the finesse of La Grenouille's food was surprising us at every course. Sweetbreads over hen-of-the-woods mushrooms had been sautéed to exterior crispness and interior creaminess, and foie gras terrine with brioche and fig compote was textbook luscious. The shocker among the starters was Sutton's assortment of cold salads: asparagus, cucumber, julienned celery, ratatouille, cherry tomatoes, shrimp in rémoulade, and cold-poached salmon with pesto. This could have been a throwaway dish, a concession to dieters, but each element on the plate had been prepared with thought and precision. We ordered an extra course of garlicky frog's legs, the restaurant's signature and namesake. (La Grenouille is French for "the frog.") 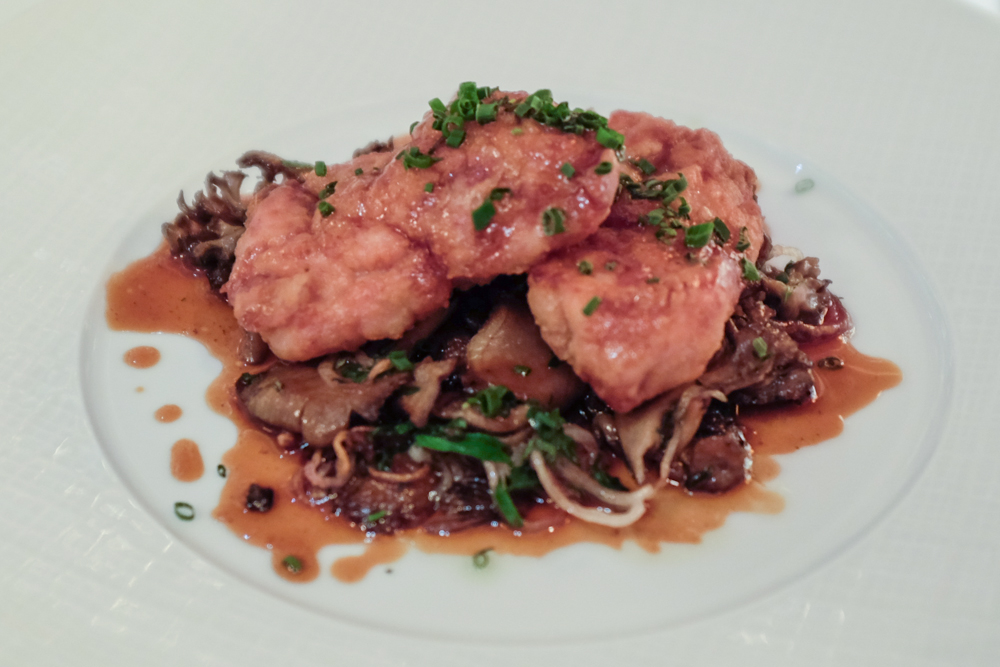 We prodded Sietsema into ordering the most modern entree: duck breast with turnips, wild rice, and rhubarb, a pleasant enough composition. The bird came out a just-rosy medium, as we requested. I ordered a beautiful classic: Dover sole gently grilled, with an artful slick of mustard sauce painted on the plate tableside by the august service captain. But the winner of the evening went to Sutton, who smartly opted for the pike quenelles. The fish forcemeat was poached into evanescent clouds, bathed in Champagne cream sauce, and thrust into luxury with generous hillocks of California sturgeon caviar atop. It was a dish that showed how impeccable technique and frank decadence can still dazzle—and remain relevant.

I have a thing for Grand Marnier soufflés, which remind me of indulgent meals in Continental restaurants with my parents as a child. I didn't realize until I went to college in Boston that this breed of dining was going extinct. At La Grenouille, I liked the sprout-green pistachio version, an occasional special, even more than the Grand Marnier option. It was a window to the past, mine and countless others, and it made me nostalgic and content to discover it in the present. 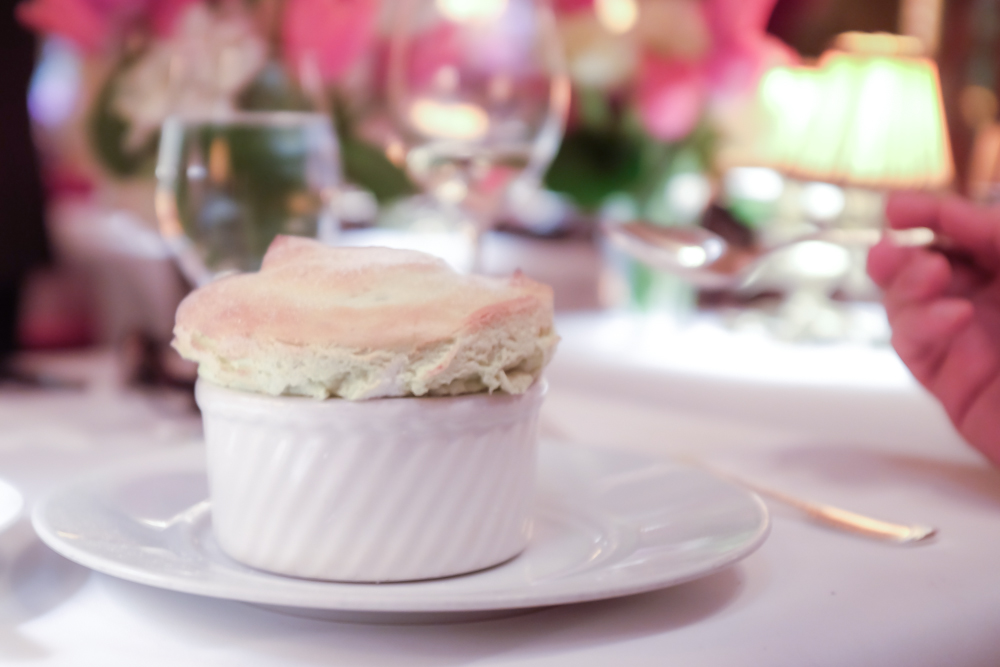 Ryan Sutton and Robert Sietsema had their own takes on the meal.

Sietsema:
I thought the frog's legs were, quite surprisingly, exquisite—like tiny delicate fried chicken wings only with a garlicky boost.

The service captain was one of the high points of the meal. Once he figured out we were weirdos, he took an interest in us and superintended our meal, but not in a bad way. He had this way of looking at us skeptically with his head cocked to one side, as if to say, "Are you guys capable of enjoying all this antique French food?"

Once the service captain figured out we were weirdos, he took an interest in us and superintended our meal, but not in a bad way.

I would definitely go again: It was expensive, but not that expensive, and fun to see the ancient menu of the 1950s French restaurants that once dominated the city still mainly intact. The place is an antidote to many modern restaurant notions, though I found the decoration—the searing orange color and humongous flower arrangements that threatened to consume entire tables—somewhat over the top. And those annoying little lamps at each table. The cord on ours interfered with me crossing or even itching my legs; there was no way to deal with it other than straddling it.

Really, the prix fixe wasn't that much more expensive than at a modern Fort Greene bistro, though all the supplements [additional costs for dishes like the foie gras and the soufflés] definitely increased the total. The wine list was great, but that's another place where you end up spending more money than in a bistro.

One of the best parts about dining with you guys was finding out we all had different tastes in food. I loved Ryan enjoying the caviar; I would have just as soon put it in a pea shooter and taken aim at some of the other guests, who often seemed like cartoon characters. I guess we did, too. 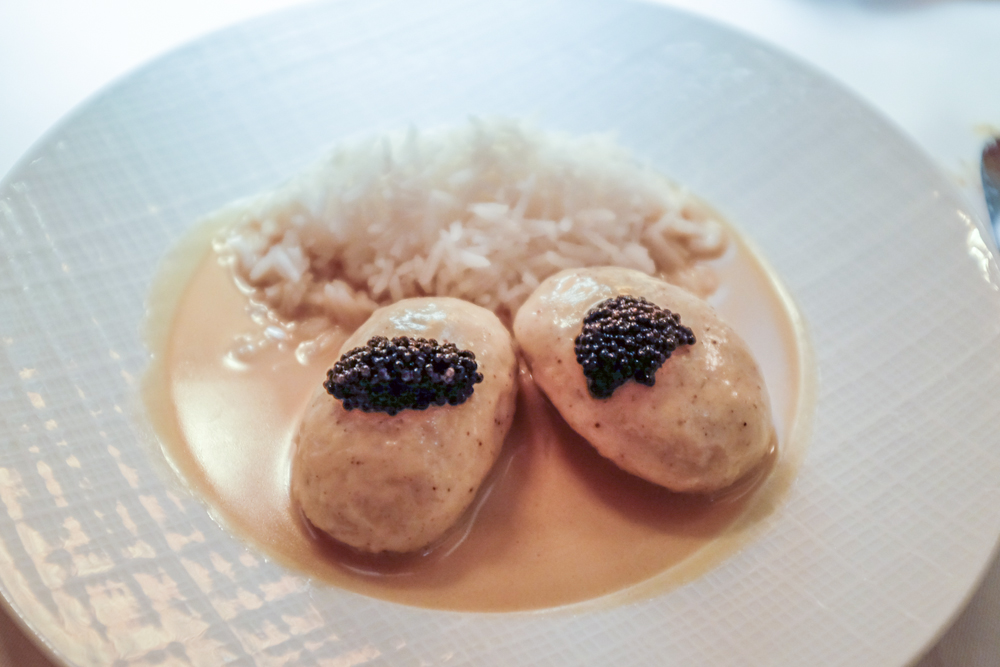 Sutton:
The pike quenelles were stunning: They were like the îles flottantes of fish. I eat a lot of caviar. It's one of my favorite things in the world (I probably have my Russophilia to blame). I can say without qualms that was one of the best composed caviar dishes I've had in quite some time, and it's the most significant portion of sturgeon caviar I've witnessed without having to pay a supplement for it.

I can say without qualms that was one of the best composed caviar dishes I've had in quite some time.

I like my soufflés just a hint drier and a touch less eggy (though on the scale of things, I'd say I still like my soufflés eggier than most), but these were awesome. My ideal is Shawn Gale's buckwheat soufflé from Saison in San Francisco.

I found the restaurant a bit more expensive perhaps than Robert did. At $104, this is one of the city's most expensive three-course prix-fixe menus, even without supplements. Generally speaking, dinner at, say, Momofuku Ssam Bar or Hanjan, with a few shared plates, plus drink, tax, and tip, will cost me $100 max, and often closer to $70 or $80. After supplements, tax, and tip, Le Grenouille can easily approach $200 per person if martinis and wines by the glass are involved.

Still, I think Le Grenouille was definitely "worth it." Even though the standard meal is three courses, we had a nice leisurely repast that wouldn't have been a whole lot shorter than, say, the tasting menu at Momofuku Ko. And while I'll take a longer tasting menu over an expensive three-courser any day, because that's just the way I like to eat, Le Grenouille made me unwittingly remember the loveliness of short-form gastronomy. I really want to bring my parents here.

What to order: Foie gras terrine, assortment of cold salads, poached pike quenelles with Champagne sauce and caviar, Dover sole with mustard sauce, Grand Marnier or pistachio soufflé.
What to drink: The wine list leans French and is predictably high on the markup. For example, we ordered a Chablis premier cru—a 2012 Jean-Paul et Benoit Droin "Vaillons" that retails for $25.99 and that the restaurant offers for $105.
Bonus tip: The restaurant is on OpenTable but often appears to be completely booked, particularly on or near the weekend. I scored a Friday night table later in the evening by calling the restaurant directly. You can also try scooting up to the bar, which serves the restaurant's full menu.

Our review of La Grenouille