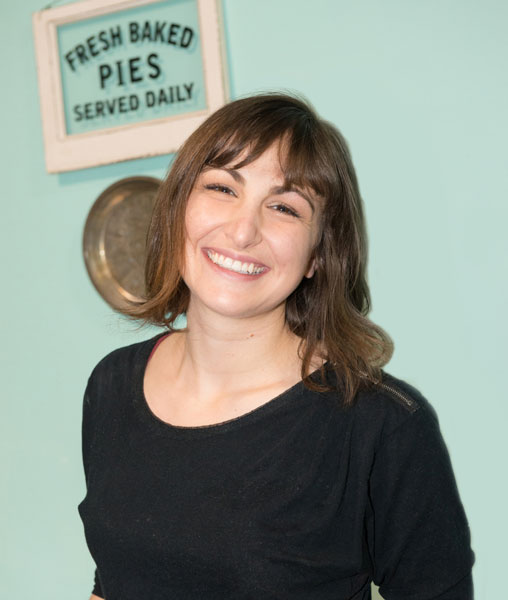 Eater Young Gun semi-finalist and industry newcomer Briana Warner, 30, is all about pie diplomacy. The proprietor and baker at The Maine Pie Line spent her twenties working as an economic officer in the foreign service, constantly baking pies for her meetings and introducing foreign diplomats to the classic American dessert. (The verdict: "Everyone gets excited about sweets.")

While experimenting with her take on crust, Warner would tuck whatever ingredients were on hand into her pies, like avocado and mango while in Guinea. As she traveled and lived around the world with her husband, she would take note of interesting flavor combinations. "I'd have a really good dessert, and think, 'How can I turn this into a pie?'" she says. When she opened The Maine Pie Line in October, the menu reflected her global-meets-local philosophy.

Here are 10 things you should know about Warner and the Maine Pie Line:

1. Maine was always part of the plan.
Warner's husband is from Bangor, and the two dreamed of coming back to New England. She lived abroad for over a decade, but she loves all the innovation in the Portland food scene.

2. Warner is self-taught.
Pastry is notoriously tricky to master, and she spent years fine-tuning her version before opening the shop. "I quested after this perfect pie crust," Warner says. "Everything on top of that is just fun experimentation with flavors."

3. She's confident the career change was a solid idea.
Warner left the foreign service because she wanted to work with her hands, build something from the ground up and create meaningful jobs. "I want to do something that means a lot to me...and take my international experience and international flavors and put them into something that can be really bland. I realized it was stupid to dream about it, and I should just go for it."

4. Her background in economics is still working for her.
Lots of young chefs go the pop-up route before committing to a space, but Warner decided to go the wholesale/retail route instead. She found a spot in Portland's food hub, a former taxi warehouse she shares with three other businesses. But as Warner puts it, "It's pretty easy to get people to invest, once they have pie."

5. The Maine Pie Line is NOT a pie shop (yet).
While it's possible to duck into the store to buy a 9-incher to go or a couple of hand pies, it's not a place to sit and savor a slice over a cup of coffee. Warner and her staff put out a rack of all the options, and customers pick a pie based on whatever they baked up that day.

6. Warner's become a personal pie chef to 15 or 20 different businesses.
Within Portland, restaurants and coffee shops have started turning to her for their dessert menu. "We're working with a lot of restaurants to tailor really unique pies to them," she explains. "It's fun to sit down with restaurant owners, and listen to their vision for their main ingredients." To wit, she recently created a green tea chocolate meringue pie with toasted sesame seeds for an Asian-fusion place in the city.

7. Plain apple is not an option.
Warner wants to expand people's concept of what a shell and filling can and should be. As she puts it, "I think people think [pie] is just cherry or apple or blueberry, but you can really put anything inside of it and it can be a really exciting culinary dessert." In her shop, even the Maine standard get gussied up: blueberry is laced with mint and cardamom and apple gets the salted caramel treatment.

8. Warner still has global issues on the brain.
"We try to hire only from the refugee community," she says. "I have a lot of experience with international issues, and I totally have the experience of not speaking the language of where I'm living."

9. The menu is always changing.
In the retail shop, The Maine Pie Line keeps it seasonal, with strawberry-rosemary rhubarb showing up in the summer and Dave's Decadence, a chocolate ganache pie with a speculoos crust topped with Spanish olive oil, holding it down during the colder months. It's worth noting that Dave's Decadence is a customer favorite on the sweet list and the Portlander (portabello mushrooms, goat cheese, dried cranberries) holds it down on the savory side.

10. They're growing quickly.
In the seven months since they've opened, Warner has added three members to her team. While they ship finished pies, they recently started sending unbaked savory hand pies to stores as far away as Boston. In the future, she envisions expanding the shop to more of a sit-down place, and sending her unbaked pies all over New England.