Eater New York restaurant critic Ryan Sutton is on the road this week, filing on a meal at tasting menu restaurant Forage in Salt Lake City, Utah. He'll be back in NYC next week with a starred review.

Just as Manifest Destiny once expanded our young nation across the fruited plain to the mighty Pacific, divine gastronomic providence (or perhaps the influence of the World's 50 Best List) has given more and more Americans access to restaurants serving 18 precious little courses paired with 36 pours of wine.

Never mind recent moves by Danny Meyer and the like to focus on short form gastronomy. The Long Ass Tasting Menu, a staple of Japanese kaiseki cuisine that's since been internationalized by El Bulli, The French Laundry, Noma, and obscure dinner clubs in the deepest basements of Brooklyn, is here to stay. I know this is true because the Long Ass Tasting has established itself in the heart of Utah. Welcome to Forage in Salt Lake City, which serves a set menu of 13 - 16 courses in a little under three hours.

What makes the half-decade-old Forage as relevant as ever is that it's one of the more affordable and prudent practitioners of the American kaiseki experience. The Salt Lake City venue charges a modest $87 for dinner and advertises half orders of its wine pairing at $35, a boon for those who don't partake as much, as is common in these drier parts of the country. Chef Bowman Brown describes his first course as a "Utah take" on the gin and tonic: juniper soda with cold arugula sorbet and an herb salted rim. You knock back the cold, bitter beverage in a few seconds and you don't miss the alcohol. Righteous stuff. 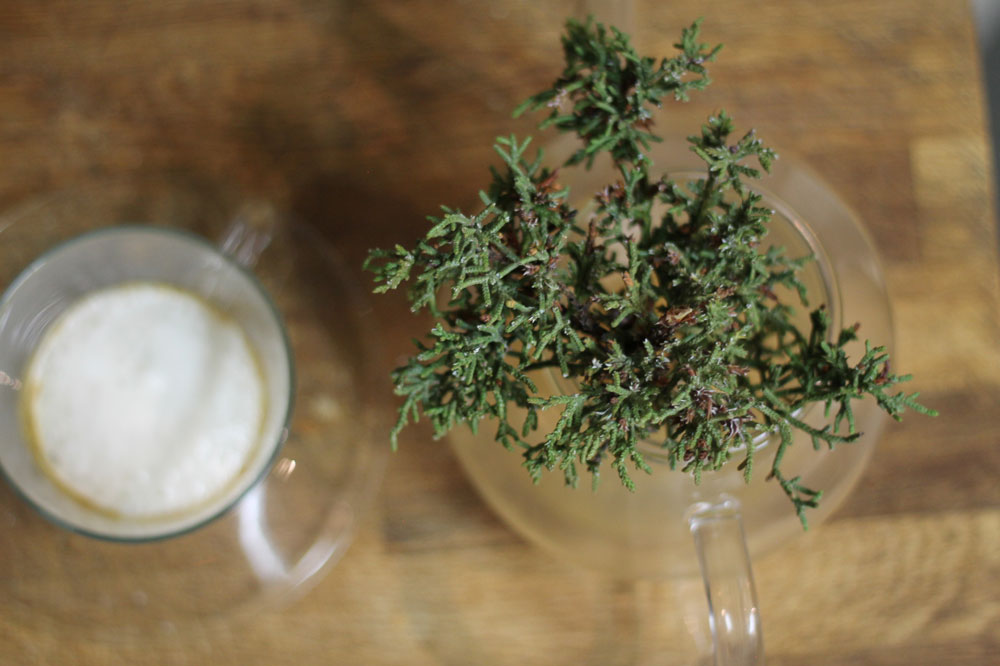 Call it a loss for tasting menu skeptics like Corby Kummer and a win for diversity, because this is how many of us like to eat. And the cost is crazy: the menu is about as expensive as Momofuku Ko's when it opened five years ago, even though Forage also opened five years ago. The full wine pairings are just $65.

Forage serves food that could hold its own in Chicago, New York, or any international dining capital.

If this were the Eastern Seaboard, Brown would surely be charging tons more and rightly so, because Forage, based on my single meal, serves food that could hold its own in Chicago, New York, or any international dining capital. "I do feel like here in the valley there is a price ceiling somewhere around the $90-$100 range," said Brown during a phone interview, while adding that he could possibly charge $125 "up in the mountains" — the state's posh vacation resorts. He's probably right. In Deer Valley and Park City, where I was skiing, one can encounter $34 fried chickens and $53 elk steaks, 61 percent of the price of Forage's menu, where elk carries no supplement.

Now you know. The folks out here like elk. So does Brown, who cooks the loin rare and adds a touch of wildflower honey, just enough to take the edge off the iron-y game but not so much as to cover it up. Brown, who's worked at Gary Danko in San Francisco, knows what he's doing. The dude picked up one of those Food & Wine Best New Chef awards in 2011, along with his former co-chef at Forage, Viet Pham, who remains a co-owner.* 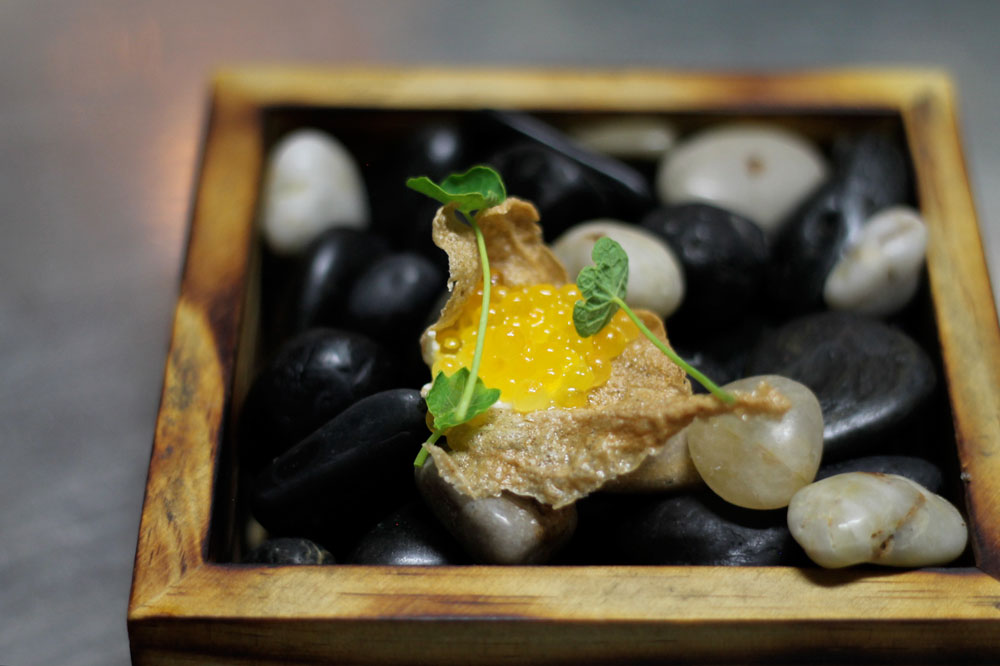 So expect food that's delicious and precise. He whips up potato foam that's airier than Paul Liebrandt's (I know my foams) and he tops the spuds with a dollop of fresh trout roe, like a pat of oily maritime butter over pommes puree. He purees black walnut with beer, pipes it into the shape of a stick, fries it, dots it with yogurt, dusts the faux-foliage with dried Douglas fir needles, and tosses it into a mini-terrarium. We've seen such Pier 1 preparations elsewhere and I'll tolerate them as long as they're as sweet, bitter, and awesome as Brown's.

Forage, incidentally, is located in East Central Salt Lake, and the city, surrounded by mountains and all their natural beauty, felt as de-populated as one of those movie towns that's about to be ravaged by a giant lizard. Forage itself is situated on a stretch of East 900 South that could pass for a residential block in any quiet suburb of Long Island or Northern Virginia — I almost walked by the restaurant because I mistook it as someone's home. 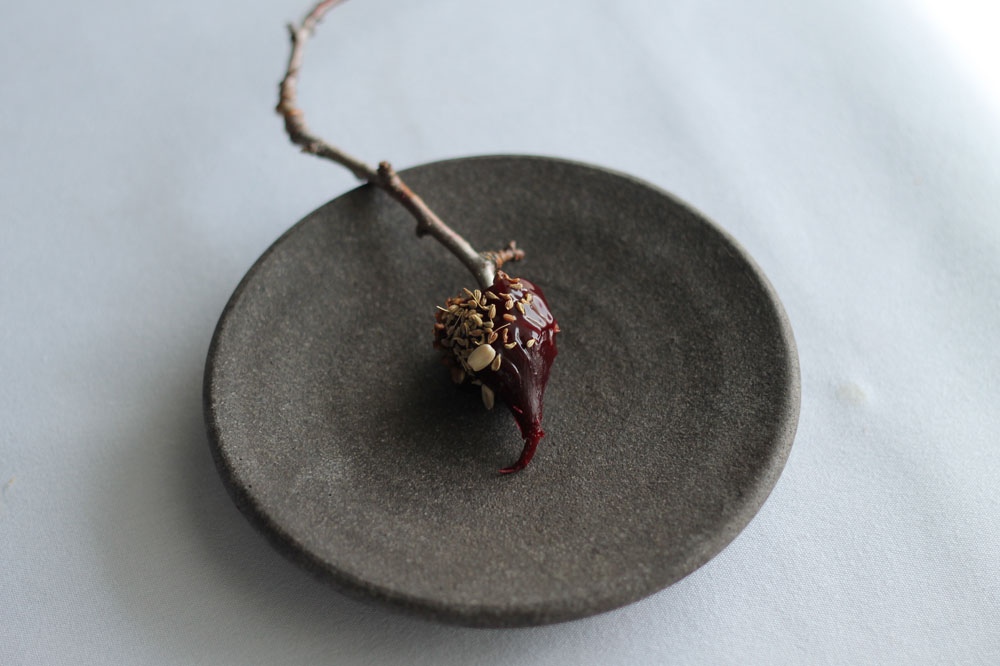 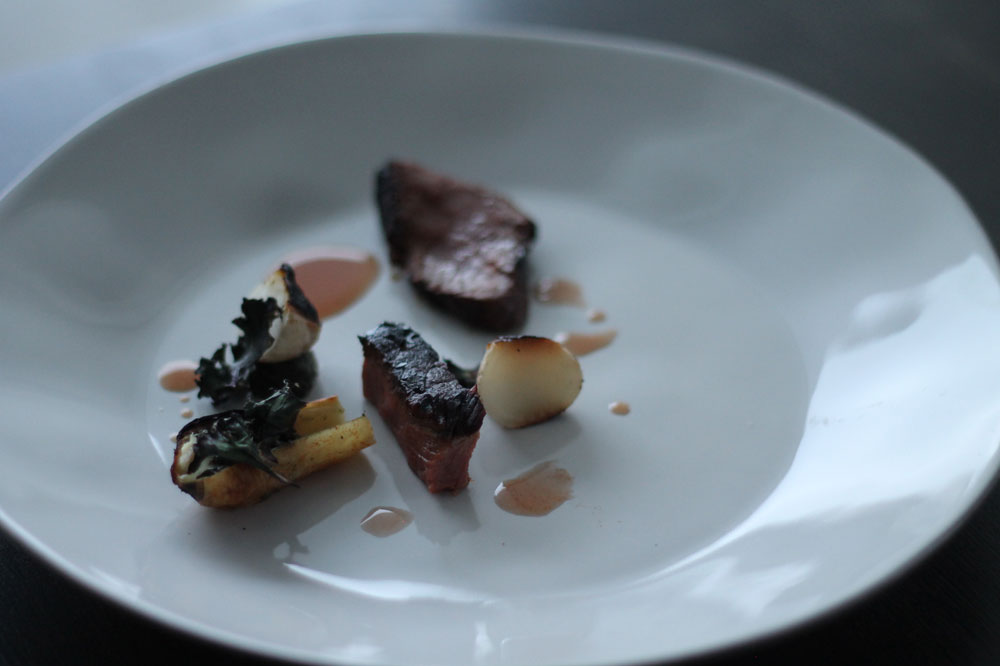 Beet with toasted grains; Elk with roots and charred kale

Sit down and true to form for any modern no-choice joint, the food starts coming. First, there's that gin-free tonic, then a succession of one or two-bite amuses: a buckwheat cake with a quail egg (meh), a fermented yellow bean meant for dipping in egg emulsion (my type of crudites), grain-coated baby beets (the cruel veal of the vegetable world), and finally, a slice of trout smoked over pinion wood, topped with apple vinegar gel and finished with a sweet cicely leaf. There's your Utah sashimi — sweet, oily and fruity.

Then come the proper courses. Raw lamb, aged five weeks, is balanced by the tartness of fermented carrots. Fresh cheese, surrounded by foamy whey, is topped with forsythia flowers that start sweet and finish bitter. Where do the flowers come from? "A very kind neighbor six houses down," says Bowman. Cool. He grills sturgeon with leeks and follows that up with a clear consommé of the fish's bones in a cedar bowl; the broth tastes of clean wood and ocean.

But best of all are the Spanish sweet onions, stuffed with heady chicken sausage, glazed in a sticky onion reduction, cooked over hot coals (the bitter char tempers the sweetness) and paired with pickled onions. The meat seasons a three-way degustation of onions rather than the other way around, a brilliant dish that wouldn't be out of place at David Kinch's Manresa or Joshua Skenes' Saison.

Eliminating choice allows Brown to focus on serving the best products, instead of kowtowing to the whims of the customer.

Sorrel, nature's best lime impersonator, helps wind down the meal, in the form of an airy meringue and a bright sorbet. Sugar-baked rhubarb is paired with onions to bring out its vegetal side, and then topped with sour buttermilk sorbet to remind you this is still dessert. Soft acorn cake is soaked in warm acorn milk, taking on a gorgeously musky quality that I can only describe as the dairy equivalent of aged meat. And there's your meal.

So say what you will about the inevitable march of the long tasting (which I've generally been a supporter of). Forage is the type of restaurant our country needs more of, challenging the diner, charging a fair price (perhaps too fair), leaving you sated (but not stuffed), and eliminating choice to allow the chef to focus on serving the best products, instead of kowtowing to the whims of the customer. This Bud's for you, Bowman Brown.

*Correction: In the original version of this piece we incorrectly stated that Viet Pham was no longer involved in the restaurant. He is a co-owner.

Our review of Forage

Cost
About $200 per person after full wine pairings, tax and tip.
What to drink
Half wine pairings at $35; full pairings at $65. If you plan on skiing the next day, I do not recommend finishing every glass of the full pairings. Trust me.
Bonus tip
Forage is a 15 minute cab ride from the Salt Lake City International airport. Those staying in Park City can ride the municipal bus into town, which takes about an hour. Getting back to Park City will require a private ride, at about $100. Or you can drive, if you have a license, like many people outside of New York apparently do. Same-week reservations are easy enough to come by on OpenTable. Bowman says ski season is busiest, while business drops off "quite a bit" in the fall. Forage is considering serving a shorter 7-course menu on Tuesdays, Wednesdays and Thursdays, at $61.

Where Trust Grows Alongside Produce