Not only is Elise Kornack of Take Root behind one of the rare female-run tasting menu-only dining rooms in this country, but she's conquering it all by her lonesome. At age 27. Her wife, Anna Hieronimus, oversees front of house, while Kornack handles every last point in the kitchen from prep to plating. This here is a two woman show at its finest, with all ingredients, inclusive of bread and butter, made onsite.

Kornack expanded her resume from chef to restaurateur in January 2013 when, at age 26, she soft launched Take Root, a three night a week restaurant (plating Thursday to Saturday nights) in Brooklyn's Carroll Gardens neighborhood. Prior to that she cooked under April Bloomfield at The Spotted Pig and most recently served as sous chef at Aquavit. In the last year plus, Kornack has won praise from the New York Times for her meticulous and beautifully plated tasting menus, for which she charges $85 to try 10 dishes in a tasteful, 12-seat shoe box-sized den. But for such a modest two woman show, dishes attack on a surprisingly confident and polished level — more like plates one would expect from a veteran chef.

Says San Francisco's Dominique Crenn, chef behind two Michelin-starred Atelier Crenn, another girl-powered tasting menu-only temple: "People need to allow for women to do something that is less 'rustic' and more innovative, and Elise is doing just that at Take Root. She is every bit as talented a chef as some of the young men behind tasting menus that are being talked about non-stop. She is so on point at such a young age and I, for one, am really excited to see how her career in the kitchen develops."

How did you end up at The Spotted Pig? I had applied for a job at Hearth and The Spotted Pig and had trailed at Aquavit in like 2009 and was kind of up in the air about what kind of experience I wanted. At the time I just wanted to get my ass kicked and be in the thick of it and be at work until 3 a.m. and drink after work. I was young, I was 21 years old. So, I though it would be fun to work at The Spotted Pig.

You've worked in some prestigious kitchens. How challenging has it been for you to be a female in a mostly male world? Honestly I don't feel it's difficult in the workplace. I personally haven't been exposed to that at all. I'd say in the media maybe a little bit. Only recently am I coming to understand that because I own my own place. 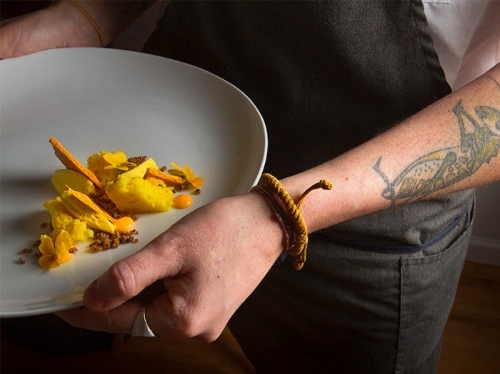 You opened Take Root at the impressively young age of 26. How did you know it was time to open your own place? At the time I left Aquavit they were undergoing some renovations, so we were kind of at a spot where I could stick it out for a few months while they finished and take a vacation or take that moment to reconsider my life. At the time my wife and I were engaged and we just moved to Brooklyn, had this huge garden, so I just dove right into gardening and then saw through that that I wanted to have an in-depth look at my career and just focus on finding my style and finding what it is about food that really connects me.

Many chefs push the farm-to-table thing and tout house-made ingredients. What makes your approach different? All of the chefs right now in the city are pretty much having the same ingredients if you're going to the greenmarket, but it's what you do with them. And introducing an ingredient in a way that people haven't seen it before, so that's definitely one way of doing it. And then the other is making my own bread and butter and stuff like that in house is just a little bit different because I'm one person, so everything being touched by just two hands takes that farm-to-table approach to really an extreme level.

What were your expectations for Take Root before it opened? I have goals for myself that are always going to be in my heart, in the back of my mind, certain places I want to reach in my career by a certain time. But that really isn't at the forefront of why we opened it. We opened it to showcase a different way of eating, a different experience. This is a deeply personal dining experience, it's very intimate. There are only 12 people and the people that are serving you are ... not only are we married and we're doing this together, we're also the only people here doing literally everything from decor to wine to food to everything ... we just felt like there wasn't something like this in New York.

You have 12 seats with one seating on Thursday, Friday, Saturday. What do you do the rest of the week? Prepping? Yeah. I'm only off on Sunday. It's 10 composed plates and every single thing I am doing, so if you can imagine how long it would take just to do one thing times that size.

What are some of the challenges of executing 10-course tasting menus by yourself? Not being too hard on myself. I am a total perfectionist and I am my biggest critic and without having somebody to bounce ideas off of sometimes it can be really hard to come to a conclusion on a dish and feel confident about something when I am feeling a little bit insecure about it.

How has Take Root changed since you first opened? It's literally a 180. We gut renovated the entire restaurant. It actually flooded on the last day of our honeymoon when we were in Mexico. It was pretty shitty. We came back and literally every single thing from floors to furniture had to be renovated except for the kitchen because it's closed off in its own space. So, it's a completely different experience now. Everything is really beautiful and very refined and we were able to get everything we ever wanted in terms of glassware and stuff. In terms of the vibe, we are confident in what we're doing and we're excited about it now and everything is really settled, so I feel like we are giving off that energy off to our diners.

What is one piece of advice you wish someone had told you before you opened Take Root? Patience. Because I think especially in the industry certain people can become massively hyped very quickly and for some people it takes years until they enter the scene. And that is very much a product of media and press and diners and you have to remember that. How things are happening is not indicative of your talent or of your space or what you're bringing to the table. It's so much about timing and everything else that's going on in the world. And I think it's very important to remain patient in the process and letting people find you and letting things unfold organically.

What else would you like to accomplish in the future? Everything! I just would like to be at a place where people really respect and understand what we're doing here.
· All Eater Young Guns Coverage [~E~]
[Photo: Elise Kornack]