The Road to the 38: Urasawa in Los Angeles

Share All sharing options for: The Road to the 38: Urasawa in Los Angeles

Watching Hiroyuki Urasawa as he made nigiri sushi felt almost intrusive. His expression was tender. He was smiling to himself. He looked like he was practicing tai chi, each movement studied and precise. Each time he coupled a sculpted piece of fish with its thumb-size portion of seasoned rice, Urasawa placed the sushi before him and paused for an instant to consider his handicraft. Then he lightly painted it with a soy sauce mixture. Some pieces would be dribbled with freshly squeezed yuzu juice; a few received a flurry of green yuzu zest.

And when, one at a time, he laid the series of ten or so morsels in front of his tiny band of customers, we snatched them in a flash. We were following instructions. At the onset of the extravagant sushi progression, the meal's pinnacle, Urasawa had told us to eat every piece within ten seconds. Dude was dead serious.

I had read about the "ten-second rule" in online reports on Urasawa. It's one of several commands to be obeyed throughout the evening—and one of several reasons why the self-named Beverly Hills hideaway is among the most polarizing restaurants in Los Angeles. In 2003, "Hiro" Urasawa took over the space, then called Ginza Sushi-ko, when its owner (and Urasawa's mentor) Masayoshi Takayama moved to New York to open Masa in the Time Warner Center. It took a couple years for the protégé to solidify his own style—less flamboyant and more tradition-minded than Takayama's, though certainly as luxurious—but Angelinos came to embrace him as one of their finest sushi chefs.

The ones who could afford it did, anyway. A meal at Urasawa currently starts at $395. Including one relatively modest half-bottle of sake, tax, and tip, my solo bill came in just under $650. The experience is based on kaiseki, the Japanese predecessor of tasting menus, with a choreographed sequence of small hot and cold dishes meant to kindle all the senses. Guests sit for hours while servers monitor every move, constantly replenishing drinks and explaining dishes in reverential whispers.

So is it worth it? Obviously it depends first on whether a person finds spending that kind of money on dinner impossible, revolting, or irresistible. Local critics, interestingly, are divided. Last year Jonathan Gold of the Los Angeles Times put Urasawa at number two on his list of L.A.'s 101 Best Restaurants, noting that "you will still find no better evocation of Japan in America." Los Angeles magazine just released their list of L.A.'s 75 best restaurants in its May issue, and the mag's reviewer Patric Kuh wrote a blog post explaining why he didn't include Urasawa at all: "A prohibitively expensive Japanese restaurant inside a real estate development feels, well, kind of passé."

Eight of us were the sum of the evening's customers.

I did find the location disorienting. The restaurant is ensconced on the second floor of a building that's part of Two Rodeo, an outdoor shopping complex near the corner of Dayton Way and North Rodeo Drive. Google Maps couldn't quite help me pinpoint the entrance to the underground parking. I was eight minutes late to my 7:30 reservation, and one of the soft-spoken servers was waiting for me by the door. She led me to the 10-person sushi counter and, with a nod from the chef, sat me directly in front of Urasawa. There was a group of three women to my right, a party of four to my left, and empty seats on either side of me. We were the sum of the evening's customers. The room was simple, with walls painted gold and sage and white. Urasawa was dressed in a black kimono-like haori with the sleeves tied back. Blowsy cherry blossoms splayed from a vase behind him. I was flustered from being late—not cool, I knew, in this regimented atmosphere. Then I ran my hands over the sandy-colored cypress bar, buffed down nightly, and exhaled. Its smooth touch relaxed me like grass under my feet.

The first dish arrived, a slice of seared toro wrapped around ankimo (monkfish liver) and crowned with a hillock of caviar. The seafood tasted like purity itself, with the pop of the roe offsetting the play of creamy and supple textures. It made quite the first impression. And so beautiful! I pulled out my camera, and one of the servers promptly appeared at my right shoulder: "I'm sorry, no photos." 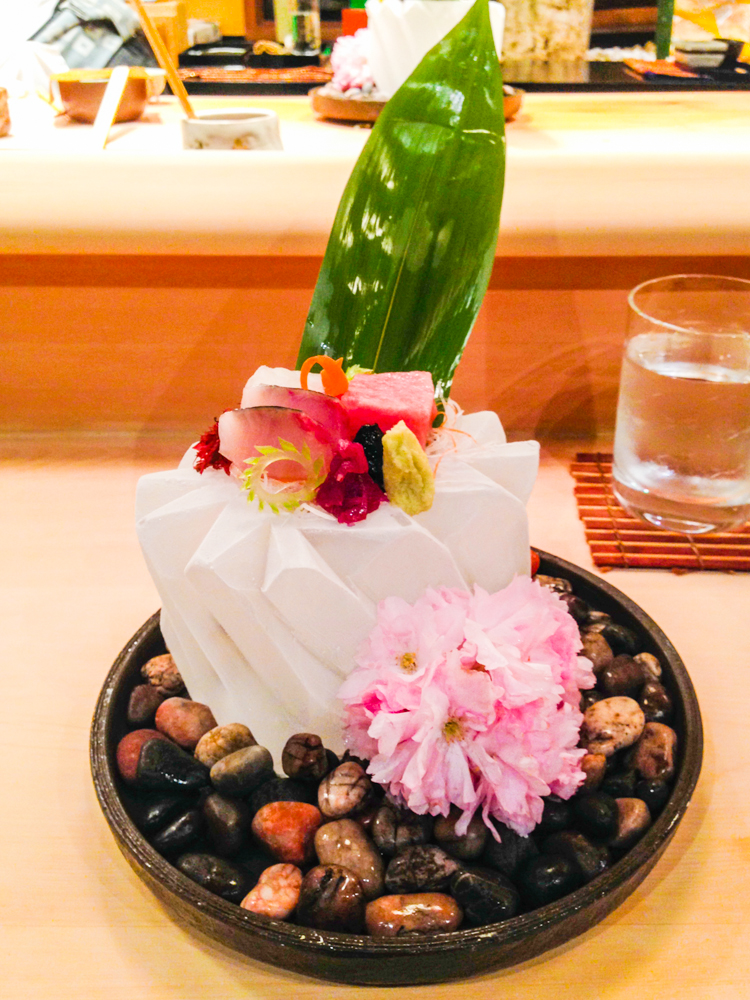 More wonderments followed, though: A variation on goma dofu, a dumpling made from black sesame paste, stuffed with uni and topped with a bit of edible gold leaf. There appeared a black spoon of half wagyu beef tartare and half caviar, finished with diced pickled radish. On the side was a small square of red pepper. "Eat the whole spoonful," Urasawa said. "Then eat the pepper." An earthy chaser after a decadent mouthful—I liked how it jangled the brain. One of Urasawa's signatures emerged: pristine sashimi (toro, Japanese snapper, Spanish mackerel) arranged over an ice sculpture that seemed to radiate from within, like Superman's Fortress of Solitude.

A shabu shabu course included various seafood and meats we swished around in broth and ate one at a time, in an order directed by Urasawa so each would be ideally cooked. Then the servers removed the vessel and returned with bowls of the cooking elixir. By this time I was in a trance. It wasn't until the next day I remembered the shabu shabu's climactic protein, foie gras, is banned for sale in California. Let's consider it the evening's one complimentary item. And it was extraordinarily silky.

I started trying to sneak iPhone pics until the server came back to admonish me more firmly. It made me angry, which is not something a customer should feel when they're shelling this much out. Despite the ban, the Internet is rife with blog snapshots from Urasawa, and I also noticed that no one in the favored party to my left—the host was in for the second time that week—was chastised when any of them whipped out their smartphones. 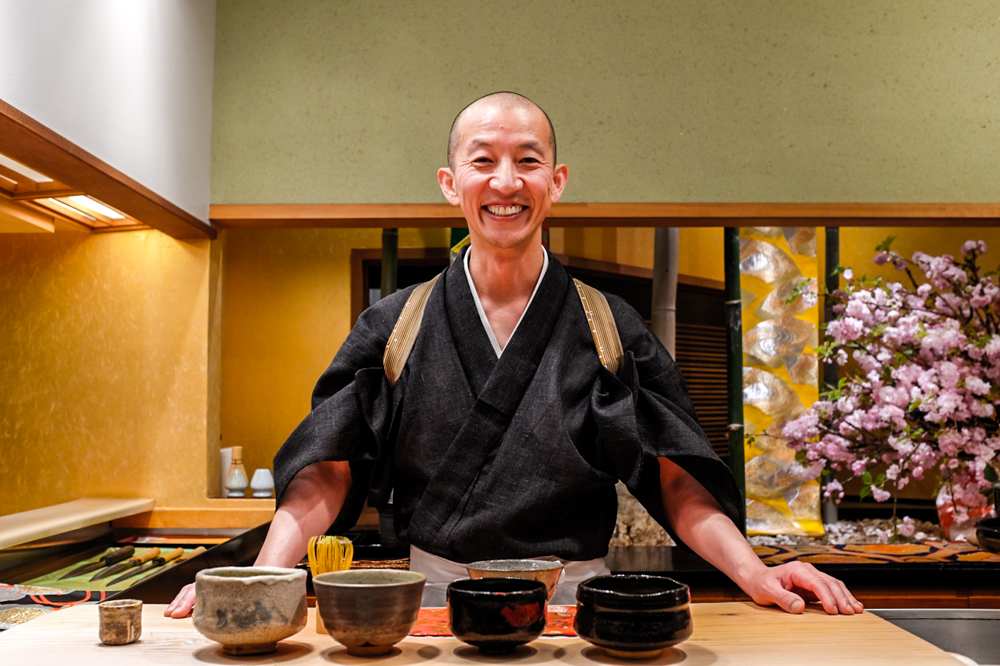 Not to slur that gracious bunch. They adopted me as their fifth, pouring me floral sake and folding me into their conversation. We whooped together over the sushi and sighed over dessert: a slice of blessedly ripe papaya fused with a layer of grapefruit gelée. On the side: one raw, intense yamamomo, or mountain peach. Urasawa, relaxed at meal's end, whipped frothy matcha tea with a whisk whose shape reminded me of an old-fashioned shaving brush. The group rushed in front of Urasawa and snapped his picture; I took one, too, with no resistance.

The dinner was astonishing; I'll be judging the sushi against all others for years to come. Would I return? Probably once in a decade, and only then if I was feeling especially flush. It isn't an accessible restaurant; it wasn't designed to be. I'll confess I feel guilty over the amount of over-fished (admittedly sublime) Bluefin tuna I consumed. Urasawa receives daily seafood deliveries from Japan and uses every part of the fish, but still. I'd request my next meal sans Bluefin. The very idea would likely befuddle or sadden Urasawa. More than any taste, I'll remember the pleasure of his concentration as he formed the nigiri. But that kind of ecstasy comes at a price—in more ways than one.

How much does it cost? $395 per person. Yes, it's one of the country's most expensive restaurants.
How to get in? Leave a phone message and a staffer will return the call. The counter seats 10 people and there's another, disconnected-feeling table off to the side. Despite the size it's possible to score reservations often in the same week.
What to expect? An exquisite progression of seasonal kaiseki (small hot and cold dishes) followed by eight or ten pieces of insanely fresh sushi.
What to drink: Sake (a knowledgeable server can guide you to something in line with your price and tastes) and green tea.
Bonus tip: Know that the idea of "the customer is always right" doesn't exist here. Give in to Urasawa's flow and order and the evening will be memorable.

Our review of Urasawa