Has Food Network placed Iron Chef America on ice? A tipster sends word that the culinary competition, which was adapted from its original Japanese format and premiered in January 2005, has gotten the ax after a nine-year run. A Food Network representative denies the cancellation rumor, writing "there is no truth to Iron Chef America being canceled," although season 12 of the series — which premiered in October 2013 — has received a noticeably slow roll out from Food Network: Only two new episodes have aired this year, the last premiering in early March.

But the network could be going the same route as Bravo did with its non-cancellation of Top Chef: Just Desserts, in which network representatives would not use the word "canceled," despite the show falling off its production calendar and schedule. (It has yet to return.) 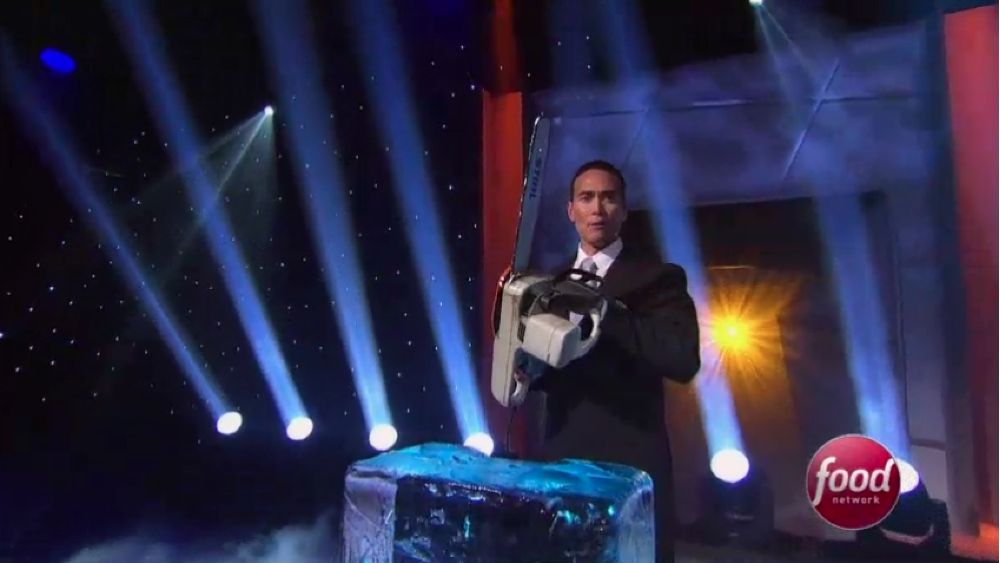 According to Nielsen ratings data from that March 2 episode ("Vegas High Rollers: Flay Vs. Sosa"), the hour-long program ranked #38 on Food Network for that week (with an estimated 877,000 viewers), far behind a new episode of its follow-up show Cutthroat Kitchen (1.339 million, the latter of which, of course, is also hosted by Alton Brown). January 26's episode of ICA, a "Big Game Day" mash-up featuring four dueling Iron Chefs on two teams, fared better in numbers (with 901,000 viewers) but still ranked #45 for the week amongst other FN programming. (Compare that number with a new January 21 episode of Chopped, which pulled in an estimated 1.456 million viewers and landed at #3 for the week.)

Recent changes to Iron Chef America's format (which have seen the addition of in-challenge "curveballs" and new timing requirements) have suggested the need to spice things up a bit. As evidenced by "Game Day" battle — which teamed up Michael Symon and Marc Forgione against Masaharu Morimoto and Jose Garces, Iron Chefs all — the show seems to be experimenting with Iron Chef teams/duos and a little bit of stunt casting: FN personality Bobby Deen was one-half of a team during a Thanksgiving/holiday themed episode that saw three chef-pairs battling it out.

Eater has reached out to Triage Entertainment, the longtime producers of Iron Chef America, for comment. The FN rep writes that "at this time, there is nothing additional to share" about Iron Chef America's future, but if you have a tip, send it here.