The Road to the 38: Din Tai Fung in Los Angeles

Share All sharing options for: The Road to the 38: Din Tai Fung in Los Angeles

I'm on board with the ramen rage as much as the next food obsessive. But I may be keener on the other trending, brothy wonder whose excellence also proves elusive—xiao long bao, the round soup dumplings that hail from Shanghai. Most XLBs reveal some sort of construction flaw when consumed: The pleated wrappers are too thin and they leak or rip when lifted from the bottom of the steamer basket, or the dough is too thick and they bloat unappetizingly. I've occasionally stumbled onto an optimal batch at a restaurant only to return and find them off. To butcher Emerson: Consistency is the hobgoblin of xiao long bao.

Din Tai Fung, a growing chain out of Taiwan, seems to have mastered the formula. The company opened its first U.S. location in 2000 in Arcadia, a city in the San Gabriel Valley (less than 15 miles from downtown Los Angeles), which is the country's epicenter for XLB culture. Lines can snake out the doors on weekends. Its popularity led to a second nearby restaurant, basically to handle overflow. Two outposts appeared in Washington State; one is coming to Orange County this summer. 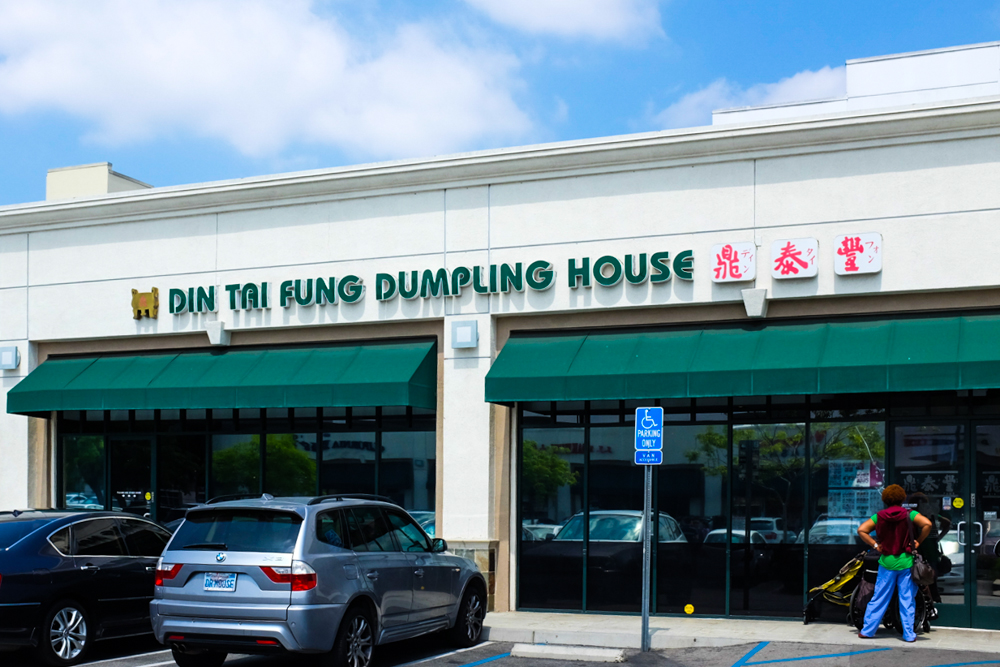 The third L.A.-area Din Tai Fung, launched last year, is a glossy affair in nearby Glendale that befits its surroundings in the Kardashian-friendly mall complex called The Americana at Brand. Those arriving at prime dining hours can expect a wait and a text message when a table is ready. Three of us came during the late side of lunch on a Friday and snagged seats immediately. The glass-front entrance led to an interior of woods and stones and neutral colors—the dumpling parlor as spa foyer. A server set down a sheet of paper with lists of dishes on both sides, and we ticked off our order and handed it back to him. 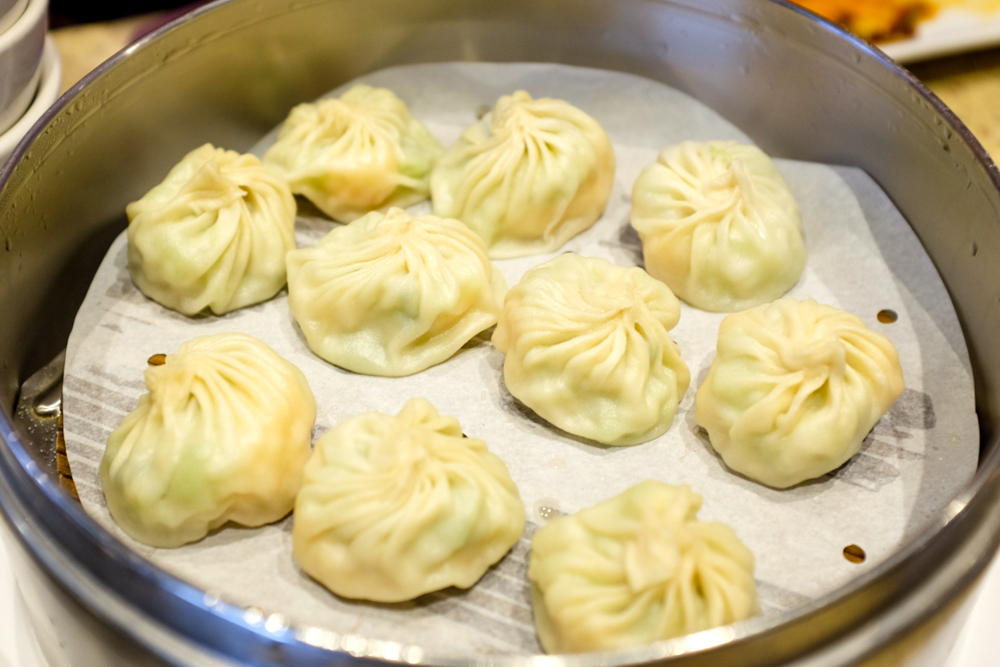 The XLB landed and … jackpot. These babies are the waterbeds of the food world, sloshy but sealed with precision engineering. We used our chopsticks to lift the dumplings onto a spoon, speckled them with black vinegar and a couple slivers of ginger, and then nibbled off a bit of the dumpling's top to slurp out the liquid. As the XLB cooled, we skipped the ritual and started popping them into our mouths whole.

Xiao long bao are the waterbeds of the food world, sloshy but sealed with precision engineering.

The time-honored XLB—listed on the menu as "juicy pork dumplings"—proved the most rewarding, with the meat and the viscous broth melding into a porcine cumulous cloud. I was also smitten with a soup dumpling variation of dim sum favorite siu mai, in which the dough is twisted into an hourglass shape and crowned with a small shrimp. A version with a dash of crab in with the pork? Too fishy. We tried a few other dishes: some mustard greens perky with ginger, chewy oval rice cakes (another Shanghainese specialty) sautéed with chicken and vegetables, a lumpy rice cake, rich with soy sauce, that reminded me of well-seasoned congee. All enjoyable enough, but the XLB easily commanded the spotlight. 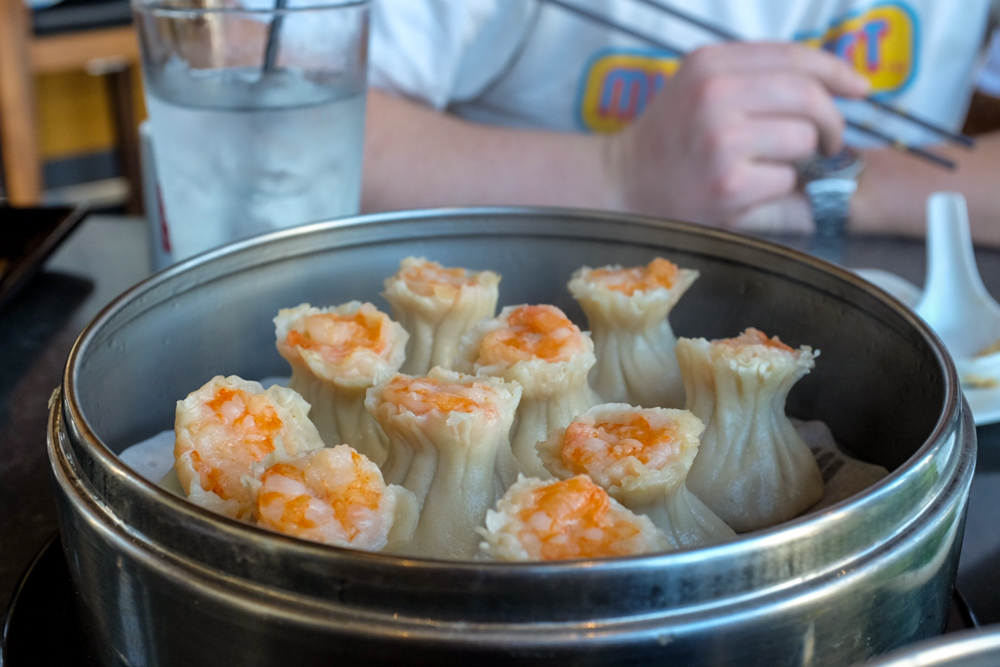 One dish on the list caught my attention: "Small dumplings with soup, weekends only, limited." I scouted online and saw that these have become something of a cult item. The old restaurant truism: Limited supply creates demand. But my curiosity was sparked, and frankly I wanted more soup dumplings. So the next day—a Saturday—I trekked out to the original (and much more humble) location in Arcadia and met some friends at 11 a.m. We scored our batch of small dumplings, and though they were as adorable as buttons, they didn't hold much broth. Verdict: Overhyped. 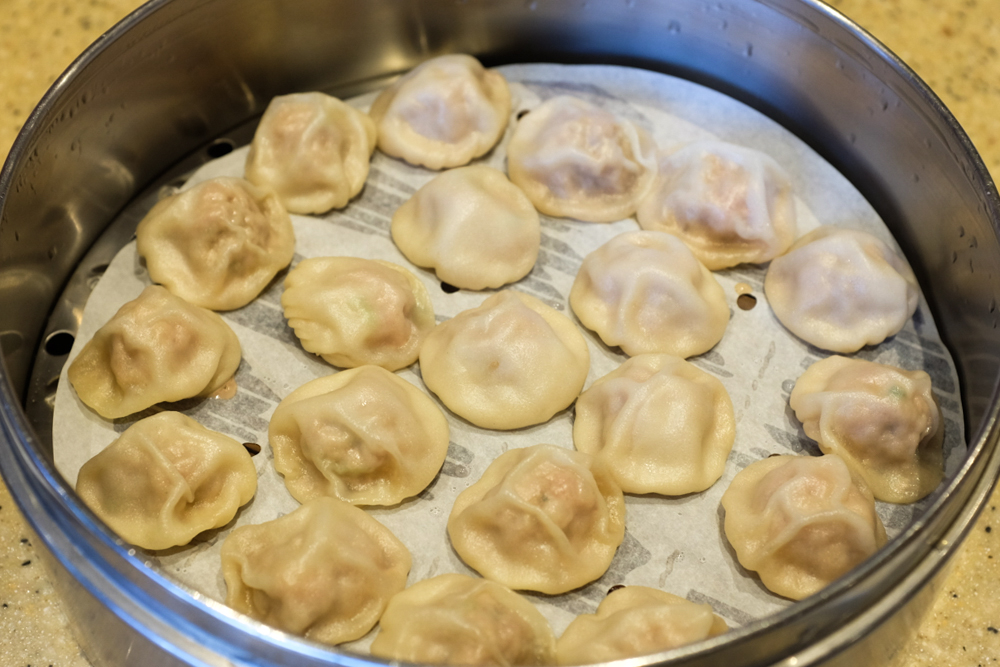 But the xiao long bao were outstanding, still hermetic but even more swelled with liquid. I like to think there's a competition between Din Tai Fung locations over which of them makes the finest XLB. I spied hunched-over crews crimping blobs of dough through windowed rooms in both restaurants. They wore lab coats and fixated on their labors with the concentration of jewelers. The workers in Glendale may toil in tonier digs, but the craftspeople in Arcadia make the better dumplings.

How much does it cost? Appetizers $3.80-$4.50; most dumpling, noodle, and rice dishes $7.50-$10; desserts $2-$5.80.
What to order: Xiao long bao (listed on the menu as "juicy pork dumplings"), shrimp and pork "shao mai," mustard greens with shredded ginger, Shanghai rice cake. If you have room for dessert, try the red bean dumplings.
What to drink: The original Arcadia location doesn't serve alcohol; follow the mostly Asian crowd and order tea for the table. The Americana at Brand location has a full bar and unusual concoctions like cold green tea topped with cream and sea salt.
Bonus tip: Go early or late during peak weekend lunch/brunch hours to avoid long lines.