To thoroughly enjoy the glory that is season seven of Kitchen Nightmares with Gordon Ramsay, please welcome Alison Leiby, who will be here every week to take us through the season. 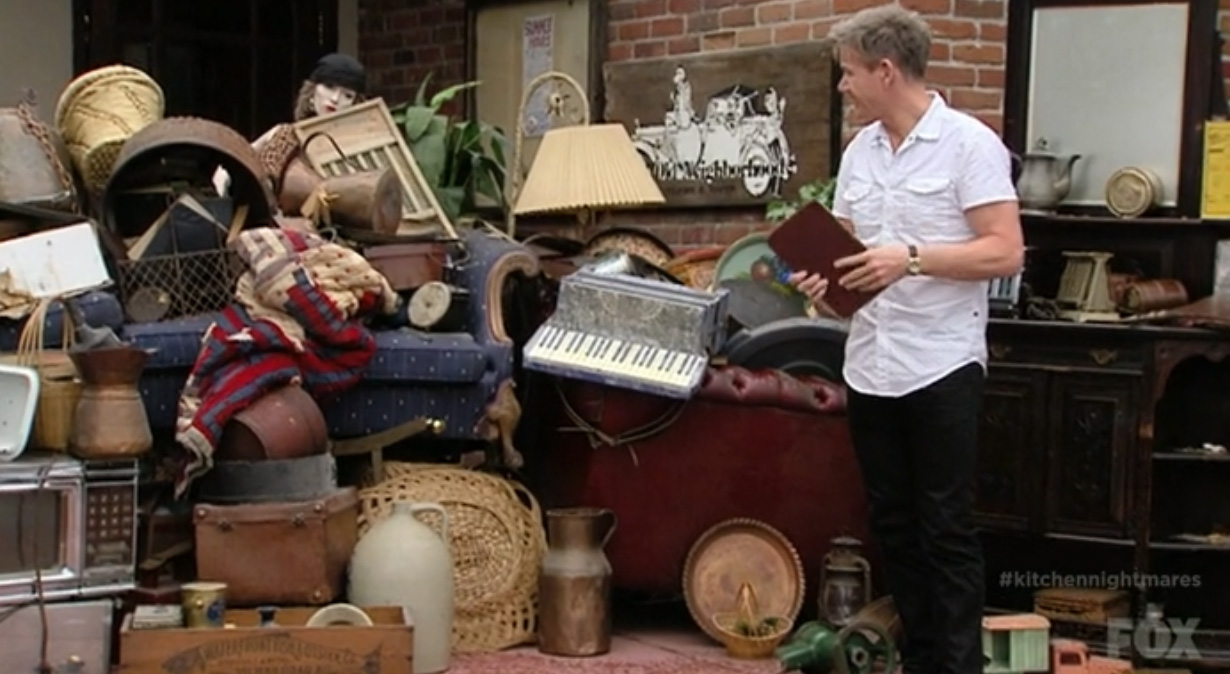 If you're looking for a new diet, I suggest that every time you think about eating, just watch the Old Neighborhood Restaurant episode of Kitchen Nightmares. You'll lose your appetite. Forever.

I have seen some very unsettling and gross things in my life. Once while walking down the street I saw a pigeon fly into a guy's face and its wing touched his mouth. I was nauseous for days, but that was nothing compared to the atrocities of the Old Neighborhood Restaurant in Arvada, Colorado. Well, I mean, I still have weekly nightmares about it, but still, this was worse.

Chef Gordon Ramsay arrives at the Colorado restaurant, and from just walking in the front door you know there's something really off about this place. If I had to point to the one thing that signaled to me things weren't right, I don't know, I'd probably say the terrifying mannequin in the entryway.

Before Ramsay can even survey the scene, he sees the mannequin and is rightfully upset. It's (she's?) wearing a baseball hat, a leopard print dress, and leather gloves, you know, just like a normal person does. He asks the owner Randy about it and he (MUCH too casually) says that her name is Fiona, and that his wife changes her outfits and takes care of her. He also explains that the gloves are there because someone stole her hands. Which, of course, that makes perfect sense. It would be creepy if the mannequin in the front of a restaurant who regularly changes outfits didn't have hands.

Once inside, Ramsay looks around the restaurant and notices not only the dated decor, but the sheer amount of crap everywhere. It was like a TGI Fridays, but if a boring ghost was in charge of picking out the memorabilia they use to decorate. 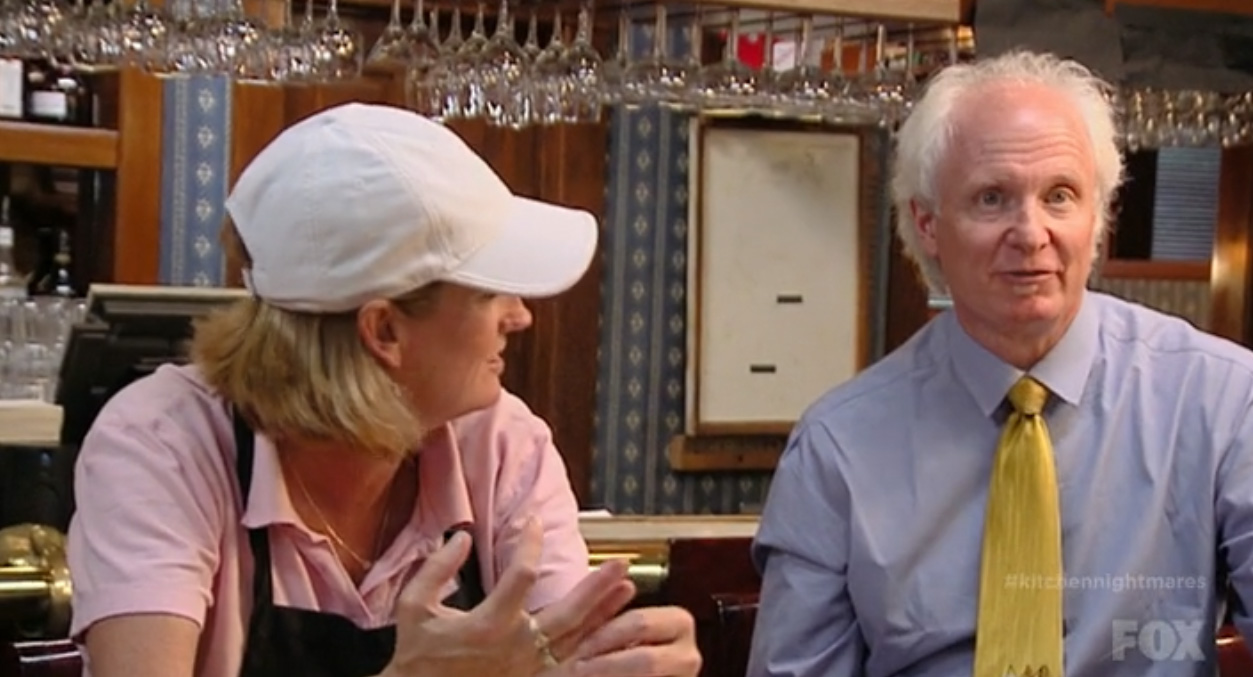 He then sits down with Randy and his wife/chef Alexa to discuss the restaurant a bit and see what has been going on. When he asks them how often they change the menu, they both have different answers, and it feels like both are lying. They settle on telling him once a year, which is clearly not true. The physical menu he looks at is at least several years old, not to mention dirty and covered in food.

While Ramsay is waiting in the dining room for his lunch, he takes a closer look at the restaurant's interior. The "antiques" lining the walls, ceiling, and any other open space are a result of owner Randy's hoarding problem. When I say "antiques" I'm mostly referencing old coffee containers and other similar garbage. He also notices that the chairs are all on wheels, but they have to be since the floor is carpeted. Everyone knows that the best flooring for a restaurant is difficult to clean carpeting.

The menu is extensive, but it makes absolutely no sense and is all over the place. Ramsay decides to try the New Orleans barbecue shrimp, the salmon special, and the Yucatan scallops. 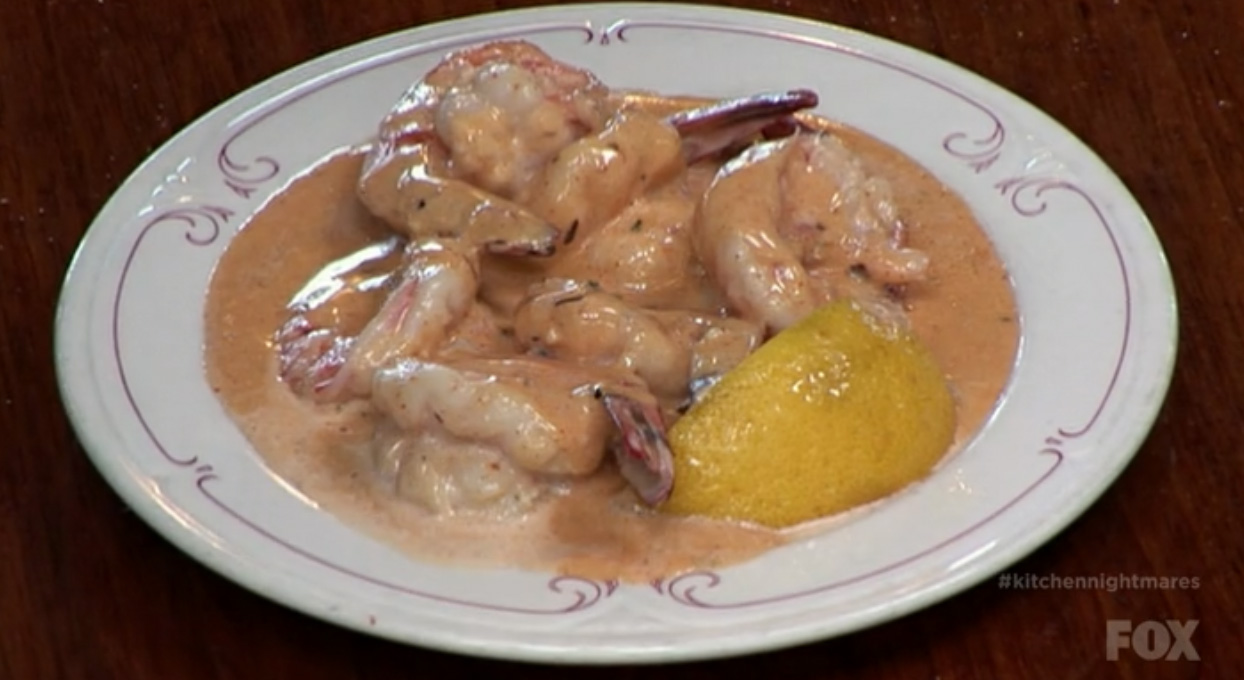 The shrimp dish comes out and Ramsay is wildly confused. Usually when you think of barbecue there's a certain color that comes to mind. Like a rich reddish brown. The dish he got had a much lighter color sauce, which was easily explained when the waitress tells him the sauce has cream in it. It looked kind of like when a kid goes to a restaurant and starts mixing up all of the condiments just to avoid eating his food.

Ramsay tastes the sauce, spits it out, and pushes the dish away from him. The salmon is the same way and arrives covered in a cream sauce. You know, that reliably tasty combination of fish and cream that you always see. 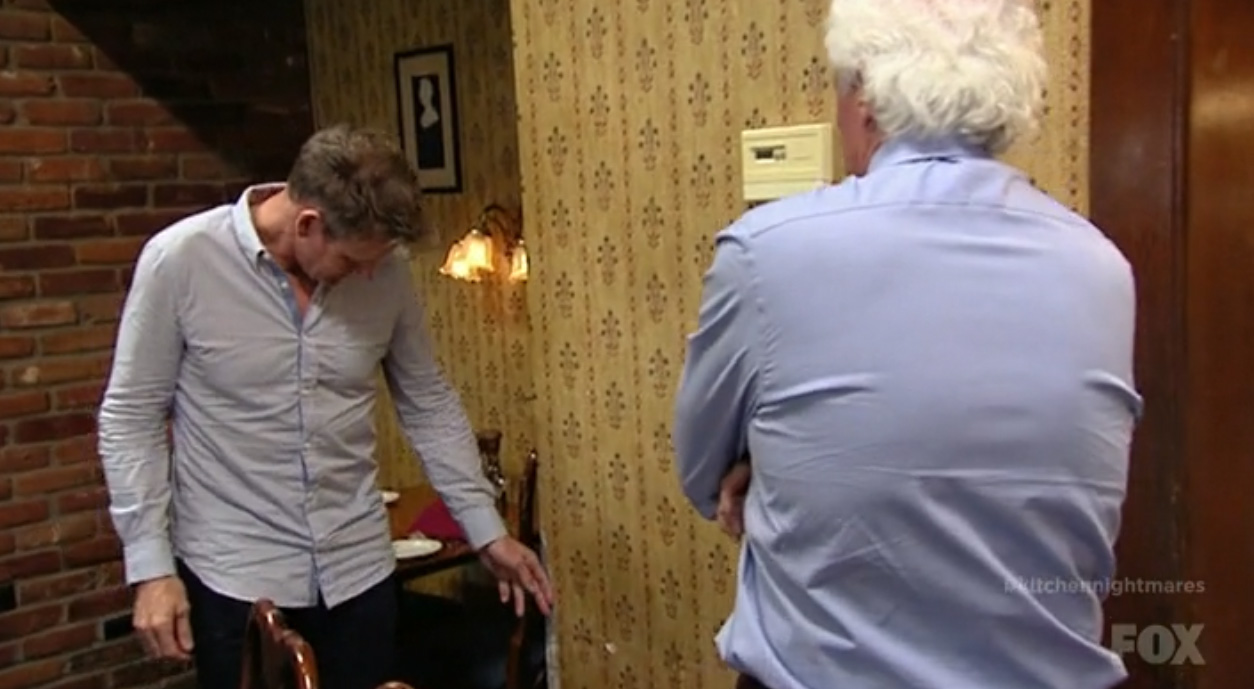 Midway through his meal Ramsay takes another walk around the restaurant after he notices the wallpaper is peeling off of the walls. He tells Randy, "This place looks and feels like it's been closed for the last ten years." Randy answers, "That's the look that the restaurant has." The interactions with Randy are tough to watch. He doesn't seem to think anything is wrong. He also doesn't blink that often.

Ramsay's Yucatan scallops arrive, and after tasting them he's equally as disappointed in the dish as he was in the other ones. He calls over Randy again and asks why it's called "Yucatan." Randy says it's because they use chipotle in the sauce. When questioned further he then says that the name may or may not be related to the dish, he isn't 100% sure. I mean, why would you want to name dishes something sensical when you could just pull a random word or region out of a hat and confuse people?

After his lunch that made a Lean Cuisine look like fine dining, Ramsay sits down with the kitchen staff to go over some issues. Alexa admits to not tasting the food she sent out, which at first sounded crazy and then I was like, well, to be fair, I wouldn't want to eat it either, so I don't blame her. Her reasoning was that she had made those dishes so many times that she didn't have to think about it. Sounds a lot like how I have sex. 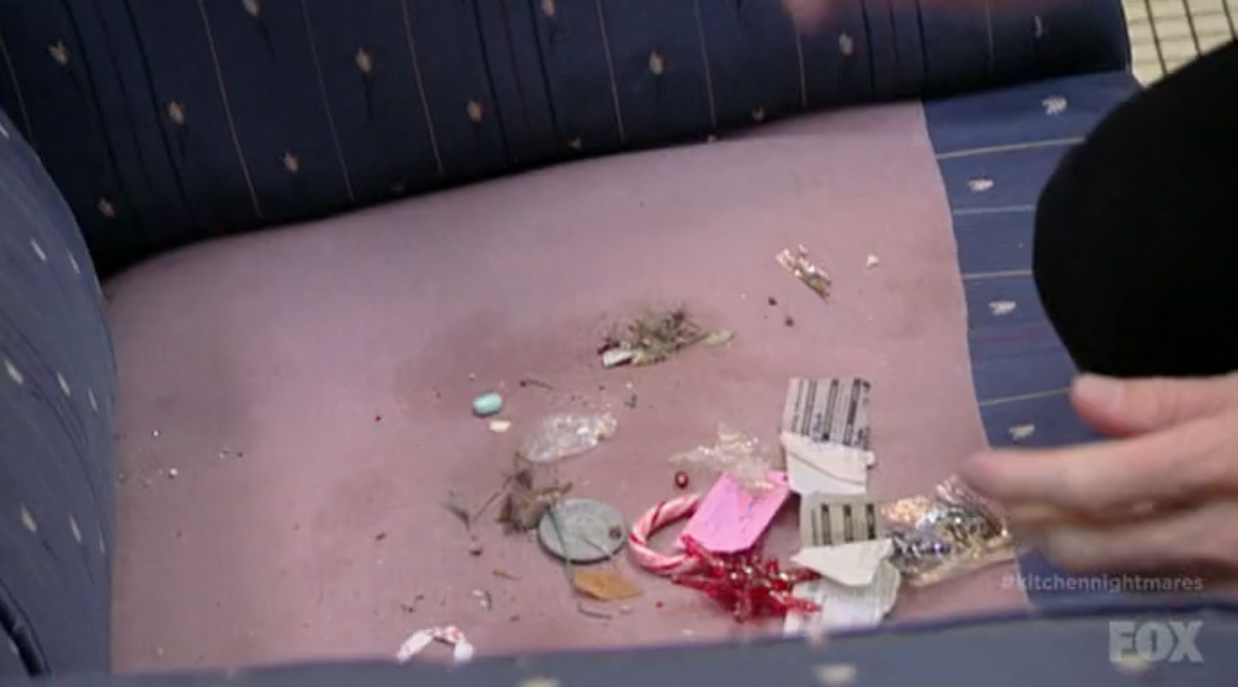 Ramsay returns to observe dinner service. He sits on a filthy couch in the front of the restaurant and starts to investigate exactly how dirty it is. This is where things start to get dicey in terms of not throwing up while watching television. In the couch cushions he finds a shocking amount of crumbs and garbage, as well as a half-eaten candy cane. Note: it is nowhere even near Christmas when they filmed this. 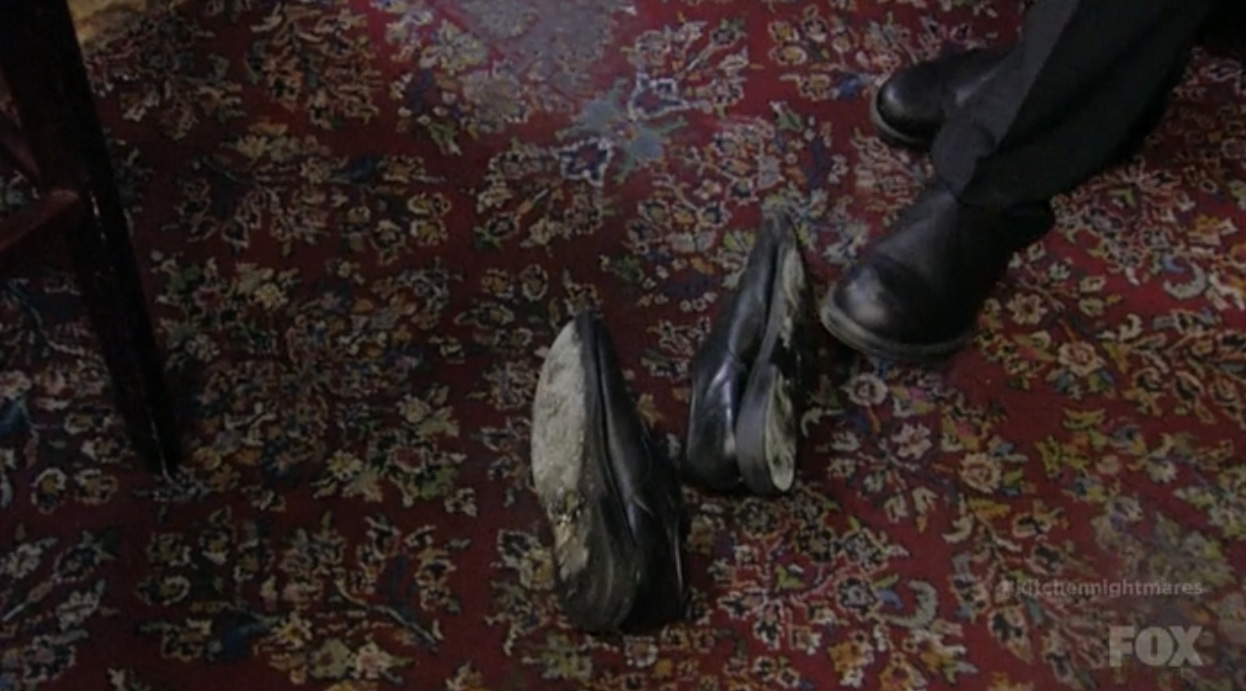 He then goes around to inspect more of the seating. He pulls up the cushions of the banquette at one table and finds an old crusty pair of shoes. He asks Randy, "Did the guy die?" kind of as a joke but also like, "Seriously what the hell is going on?" They never address where the shoes came from or whose they were or why they were there and I basically haven't stopped thinking about it since.

The kitchen is even more of a disaster. They keep the meat thermometers in a hole in the wall. Alexa sprays a non-stick coating directly onto the meat before putting it on the cooking surface. Normally, I think you spray the surface, not the actual food, but I'm no chef. 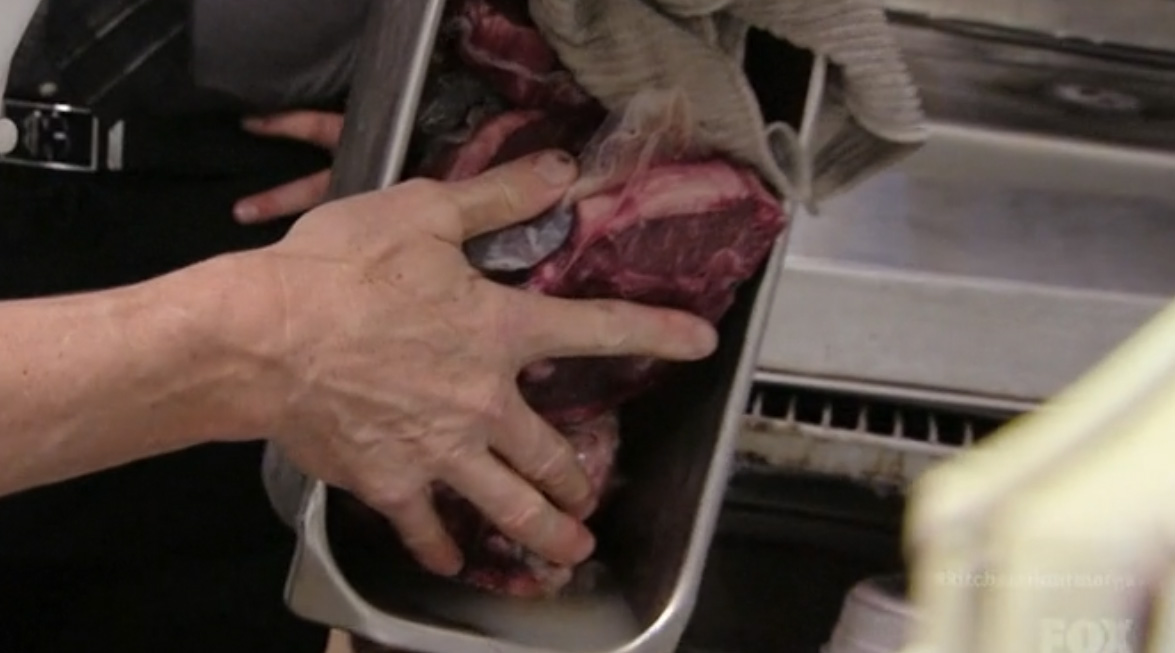 The trip to the walk-in fridge is something out of a horror movie because everything is covered in blood. They keep a chocolate pie on top of raw meat in the fridge. There is also mold and dirt and old food everywhere but again, I must stress the extreme amount of blood. Blood. Everywhere. Ramsay then finds a dead mouse. The dead mouse is a huge problem, though, once again, my issue is really with the amount of blood.

Ramsay orders Randy and Alexa's son Wiley to stop service. No more orders will go out. None of the food on tables should be eaten. He shuts the place down. 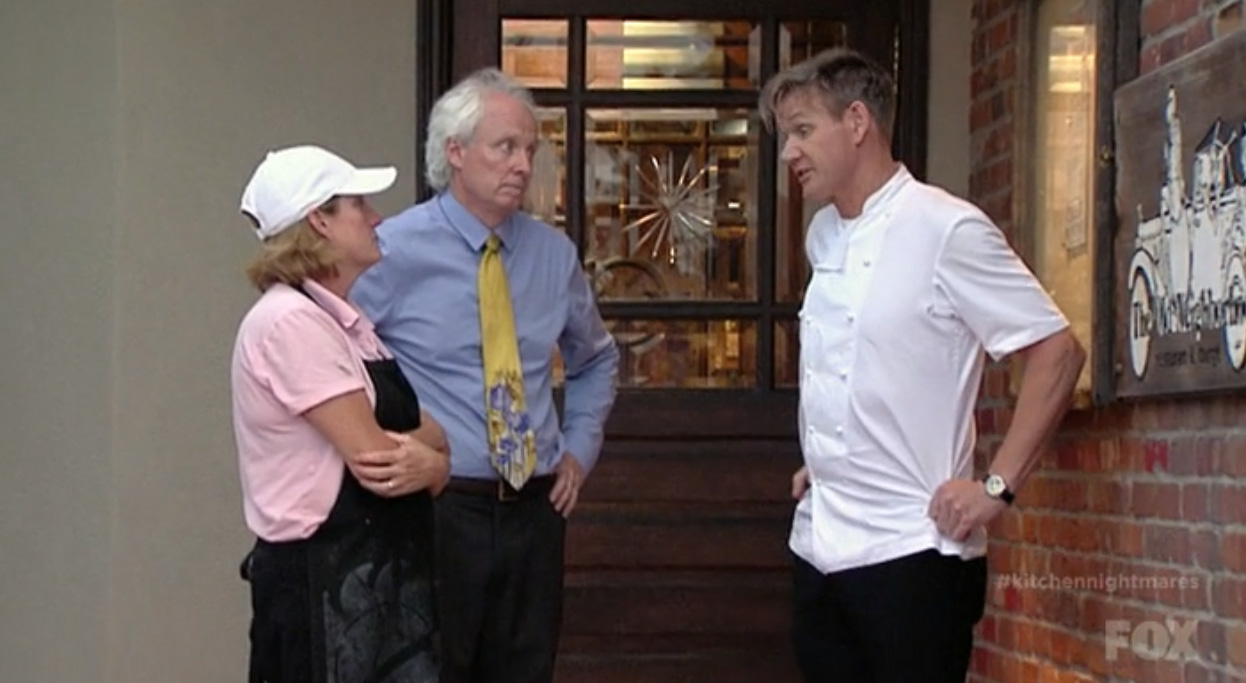 Once the patrons have left, Ramsay talks to Alexa and Randy saying he's not sure what to do. Alexa, crying, begs and pleads for him to stay. It's unclear whether Randy knows what is happening or even that he's on a television show. 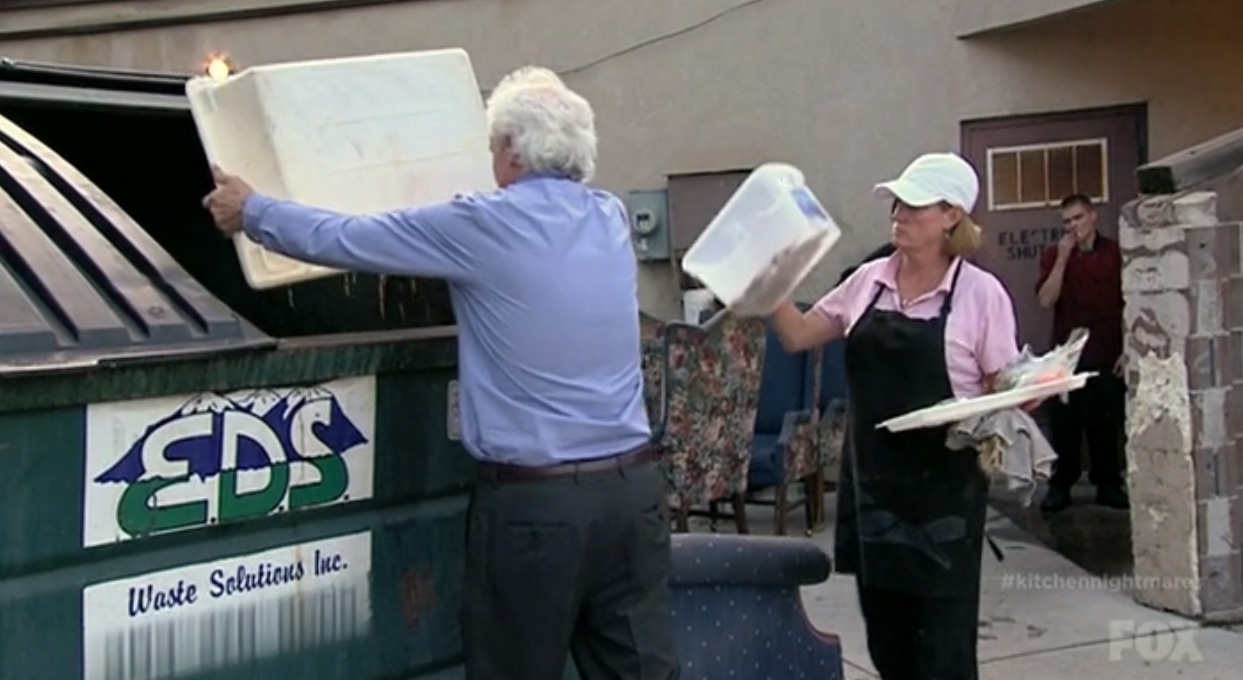 In order for Ramsay to stay he orders that they clean the kitchen. They spend all night working and throwing everything away. At one point Alexa hugs Randy and says, "We aren't good at what we do," and it's legitimately heart-breaking. It even made me tear up a little. Thanks a lot Kitchen Nightmares, you made me cry. Who do you think you are, my personal life? 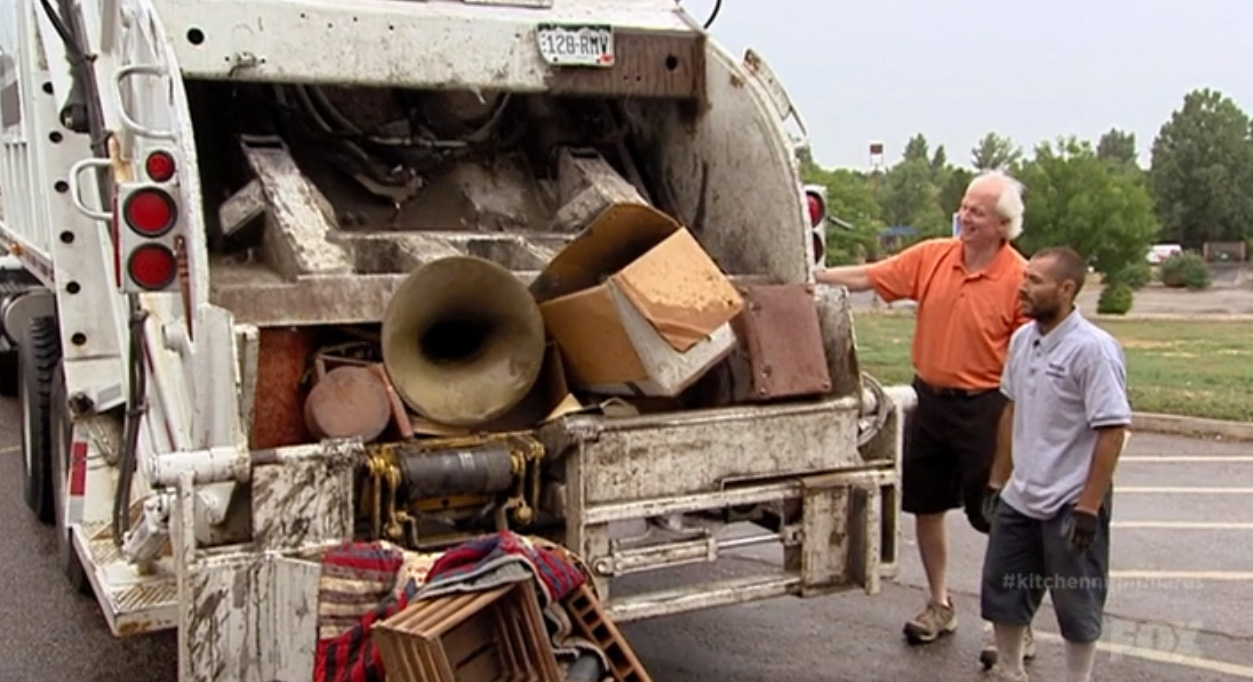 In the morning Ramsay returns and is pleased with what the staff had accomplished overnight. But in order for this restaurant makeover to truly take, he has rounded up all of Randy's garbage, I mean, "antiques," and wants everyone to pitch in and throw it all in a giant trash compactor. After everything is destroyed, there's one last item that needs to be thrown away: Fiona. Alexa happily tosses the mannequin into the truck and everyone stands around smiling and cheering as she is crushed, as if they were Roman royalty watching gladiators kill each other.

With all of of the "decor" now thankfully gone, Ramsay shows the staff the new and improved Old Neighborhood Restaurant. He replaced the upholstery and the furniture and the table settings to look new and fresh, though no word on whatever happened to the rogue pair of shoes he found in a booth.

The new menu has been reduced from 95 items to about 20, and presumably all of the dish names have some rhyme or reason behind them. No more Yucatan scallops or Austrian salad or Sub-Saharan tuna or whatever the hell they were serving. 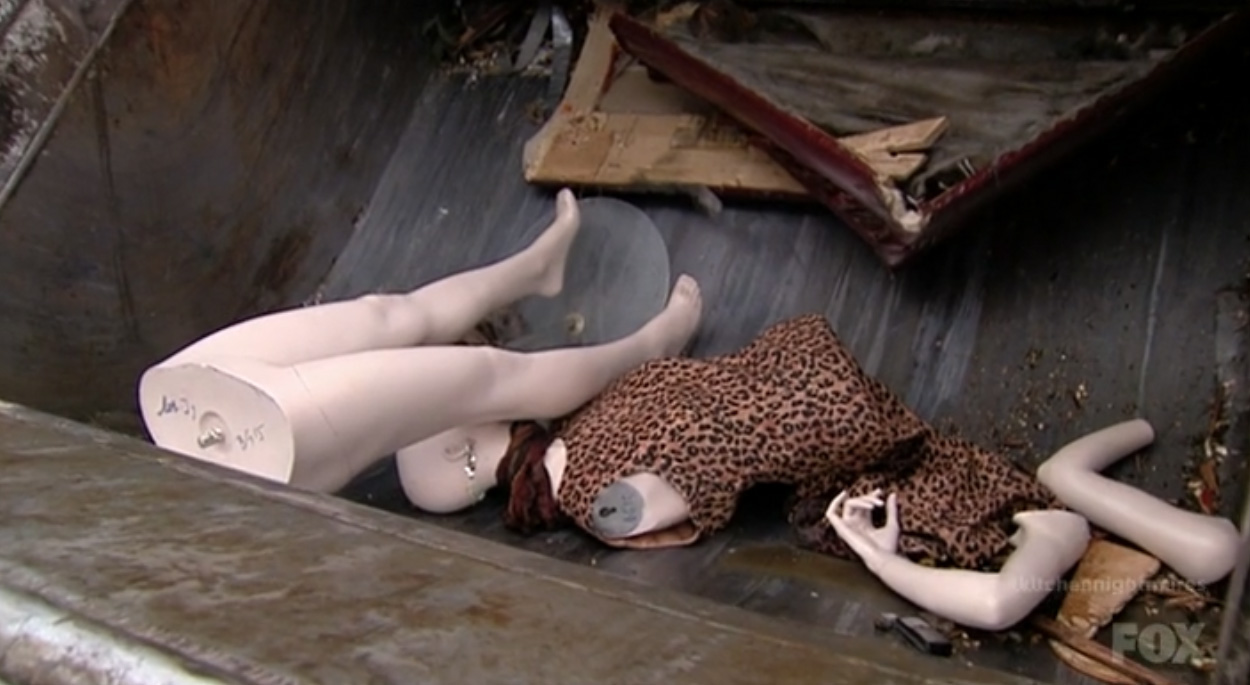 Diners are happy, Alex and Randy are happy, Ramsay is happy. Everyone has come out of this experience stronger and better. Except for poor Fiona.