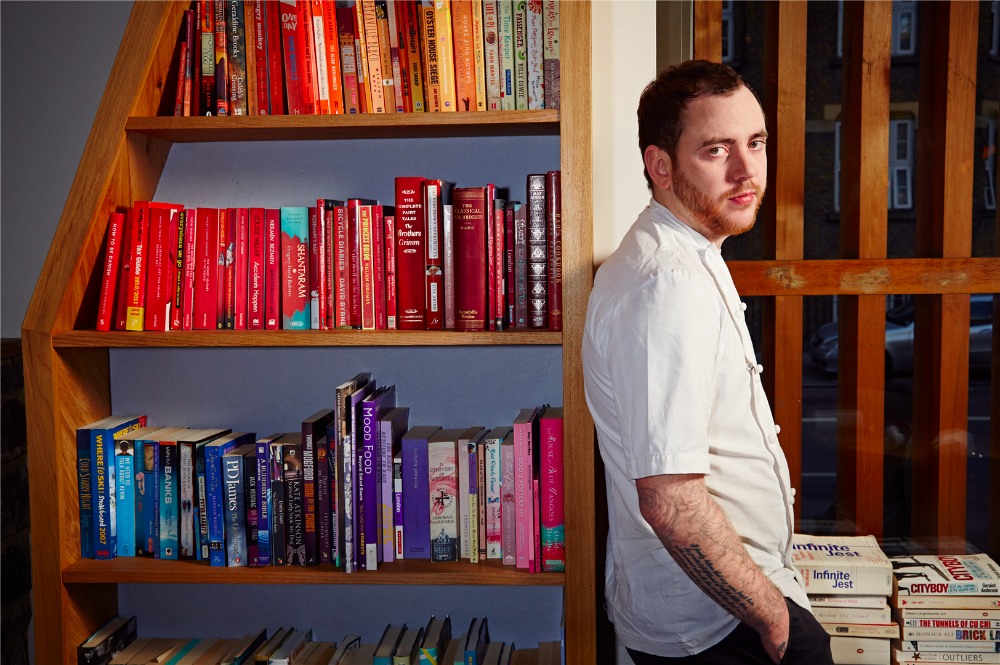 In the months leading up to the debut of Restaurant Story, the then-26-year-old chef Tom Sellers enjoyed a rush of almost unprecedented hype. The London media, first introduced to Sellers in a series of well-received "Foreward" pop-up dinners, latched onto his impressive resume (which includes stints working under René Redzepi, Tom Aikens, and Thomas Keller), the reported £2 million build-out cost, and a now-signature dish called "bread and dripping," which Sellers presented at the 2012 Young British Foodie Awards. Better known as the "beef candle," it's a solid taper candle made of beef drippings that melts and pools into its holder, where the diner can dip bread into the fat. (The Guardian restaurant critic Marina O'Loughlin, a judge at the 2012 event, still marveled at the candle during a later review: "It was that rarest of experiences: something genuinely new." It was also deemed "Bloody lovely.")

Just five months after opening, Restaurant Story was awarded one Michelin star, which Sellers now calls "an amazing feeling." As the restaurant's first anniversary arrived, Sellers spoke with Eater about the "relief" that came with Michelin, contemplates the early media pressures, and hints at more restaurants — in London and New York — to come, as well as the just-announced book hitting shelves in 2015.

Tell me about how the concept of Restaurant Story came about. You've said in interviews that the name came to you when you were 16.

We try really hard at Story to work with the narrative side of food.

I stumbled upon it when I was young. I knew that somehow, I was going to be telling my story... I think we try really hard at Story to work with the narrative side of food. It's important that the diner feels connected to it, so we work hard on finding the right produce and products, and we work hard on the way that we treat them... memory, time, or place plays a significant role in the dish when we serve it to the diner.

How do you know when a dish is "finished," or ready to be shared with the diner?
I don't actually ever do, really. I think as a cook, you're always looking to improve and evolve, and it's a decision that's made by the team in the restaurant. I think that we try hard not to overcomplicate that dish; what we try to do is as simple as we can. Ultimately, I think you want your food to speak for itself. It's about finding the balance of form and function, and I think that just comes with maturity. I think the more you go on as a cook, the more you're able to say "stop." 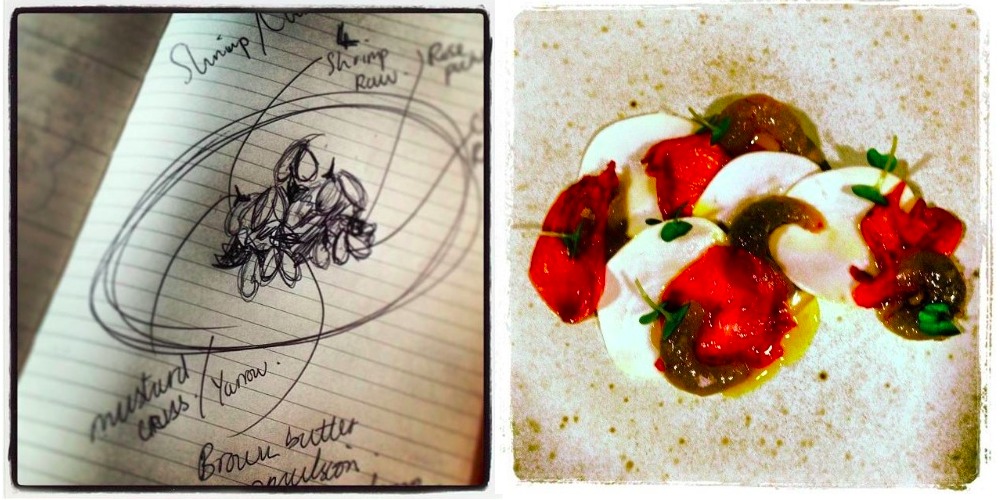 I noticed a photo online that shows a sketched out dish concept. Do you often draw your ideas on paper?
Definitely. It starts with a drawing. I think the creative side of cooking is something that I work with everyday, so, I'll get an idea in my head and write it down, I'll start to draw something. That's how it most likely starts, and then we dial and develop that idea... Ultimately, people eat with their eyes, so it's important. But I definitely don't start with, "Oh, if this dish looks good, it's going to be better." We start with the story behind it and the flavor and the way we put the dish together comes in [later].

You famously did a bunch of pop-ups before opening. How did that help inform the restaurant?
It was kind of a short window for me to go out and put myself out there. Ultimately, you make mistakes along the way when you open a restaurant, and it's how you deal with them [that matters]. The pop-up was just a way for me to use it as a short window and put myself out there.

Were you expecting all the media attention that happened during the pop-up process?

That was kind of a reality check on how popular food is at the moment.

No, not really, and that was kind of a reality check for me on how popular food is at the moment, and that people seemed to really enjoy what I was doing and wanted to know more about it. It was humbling at the same time.

How did build-out go? Any surprises?
Yeah, things always go wrong. It was a long, emotional journey. But ultimately, we got there at the end and I think that, again, it's a process that you go through. Mistakes are made and things go wrong, but it's how you deal with them that matters. Things like: We had a builder drill through a pipe in the latter stages of the set-up, which set us back quite heavily. It flooded the basement kitchen. So things like that. But you just have to deal with them as they come.

A lot was made of the fact that the restaurant cost two million pounds.
The figure wasn't surprising to me; we worked very hard previously and I knew what it was going to cost to go out there and open a restaurant of this magnitude. The media grabbing on that: I don't know, ultimately I think they try and build a picture of pressure at times. When that amount of money is mentioned, it magnifies that fact. I wasn't surprised they picked up on it, but for me, it's not as significant as they wanted to make it out to be. Ultimately, my focus is to make the restaurant as best as it can possibly be. 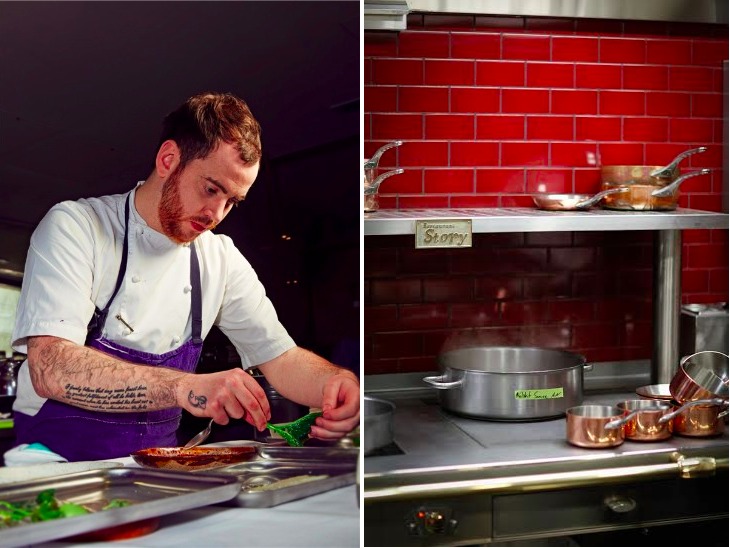 How was opening night?
Oh geez. A blur. There was a lot of pressure, a lot of attention, a lot of pressure on my shoulders to do things well. It was exciting; honestly, it all went by so fast. I was just trying to keep up.

What's your average crowd or guest like?
I think people that are into food: People who want the experience, or they're dining in every Michelin-starred restaurant. It's definitely that clientele. But we also have businesspeople, young people in the industry that dine with us a lot, and also we have local people that come and dine with us. We have a nice [mix] of people, which again, is credit to what we're doing. Ultimately, lots of people can come to Story and have a great time.

You just mentioned Michelin: What was your reaction when you got the news?

At the end of the day, I cook to make people happy.

Relief, I think. So many people in the lead up to that had mentioned it, or asked me if we thought we'd get it, or said we would definitely get it. So, it was just kind of a relief: Ultimately, it's an award that is probably the highest you can achieve as a chef. It's fantastic. It was a credit to the team unity and spirit of the restaurant and how hard people worked, and I was just very happy for everyone that worked with me at Story. It's a collective effort, and it's a huge honor to be awarded it. At the end of the day, I cook to make people happy, but you can never overlook things like Michelin stars. To be awarded something so prestigious, it was an amazing feeling.

So when you earn something that prestigious, where do you go from here?
It's easy to get carried away, but ultimately the goal is to keep the restaurant busy and the guests happy, and bums on seats, and to keep the food [up to the caliber it is]: Have a natural progression in the food and the service. And if on that journey, if Michelin wants to give me another star or people want to go out there and write nice things about the restaurant, that's amazing. But the focus has to be on the restaurant. 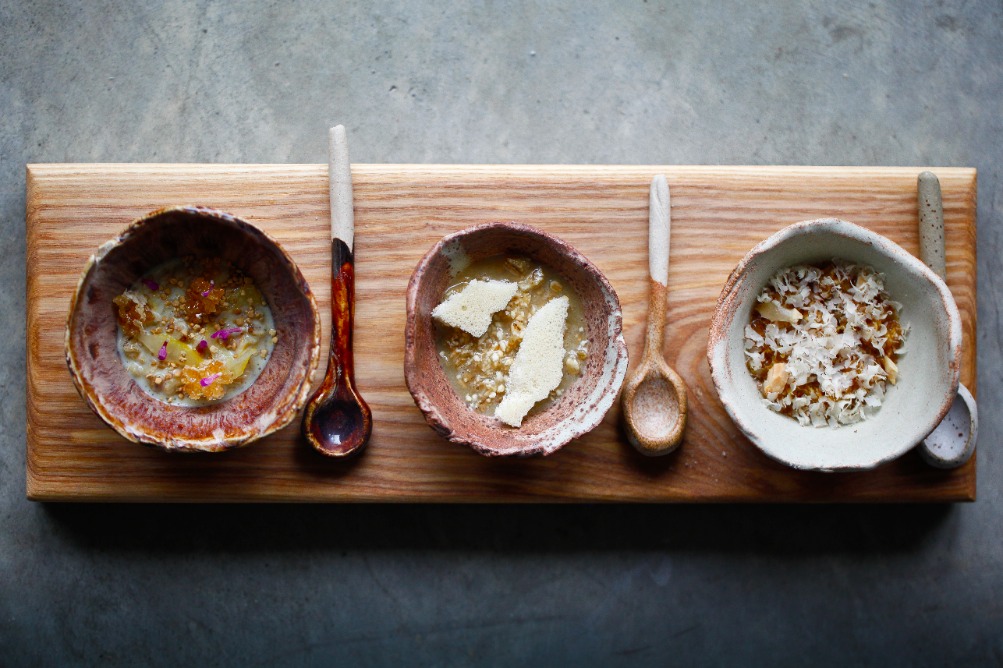 You've also mentioned that you'd like to open a restaurant in New York. Is that still part of the plan?
Definitely. New York is probably my favorite city; I spent some time there, worked over there, have friends over there, and have a relationship with the city. So one day, it'd be a nice thing to do. There's no concrete timeline. If there's going to be another restaurant, it'll be in London first.

Are there plans for a second London restaurant?
… Maaaybe.

Any details you can share?
[Laughs] No. No more.

So, where do you see the story going from here?

There will be more restaurants, I'm sure, in the future.

I think at the moment, we're taking it one step at a time. My publicist and agent work hard on things, there's a lot of things on the table now. I'm very lucky in that respect; I can look at a lot of different options. At the moment, it's just about taking each day as it comes, making sure that we maintain our integrity as a brand and as a restaurant, myself as a cook, and I make decisions as I go. But there will be more restaurants, I'm sure, in the future. There will certainly be more to the Story; we'll keep pushing the restaurant now. And other things: I'm in the process of writing a book, and that will come out next year. So, lots happening.