Republique Is the All-Day Restaurant That Los Angeles Needed

And the sublime pastries are better than ever

Share All sharing options for: Republique Is the All-Day Restaurant That Los Angeles Needed

This review, originally published on April 15, 2014, was updated on October 31, 2016 with annotations by Bill Addison to reflect a recent experience.

Campanile is dead, long live Campanile.In the two and a half years since I wrote this review, the ghosts of Campanile have been completely exorcised. Walter and Margarita Manzke have made République into one of the touchstones of modern, multipurpose dining in Los Angeles — the kind of place you can come for a celebratory dinner, meet colleagues for lunch, or swing by for coffee and (stunning) midday pastries while staring into your laptop.

Chefs Mark Peel and Nancy Silverton, then husband and wife, opened their marquee trailblazer in Los Angeles's Hancock Park neighborhood in 1989. It helped set an almost preposterous number of standards for how the country now eats. Other influential restaurants at the time centered their kitchens around the grill, or bought their ingredients directly from farmers, or entwined Italian and Mediterranean dishes among Americana staples. Campanile coalesced these notions of California cuisine under one roof. Soon glories like rosemary-perfumed lamb, fish over whipped potatoes, and luxury versions of ravioli proliferated across the land, as did nostalgic enticements like Campanile's grilled cheese night.

Silverton poured her soul into the restaurant's side business-cum-juggernaut La Brea Bakery. She upgraded fruit crisps and cobblers by sluicing pears or peaches with vanilla-bean brown butter, and her tangy loaves of sourdough redefined the genre. If today the words "La Brea" are as synonymous with bread as they are with tar pits, you can thank Silverton.

The couple split in the mid-2000s. Silverton left the business to focus on the Mozza empire with Mario Batali and partners, and Peel manned the ship until he lost his lease (Silverton's father owns the property) in October 2012. 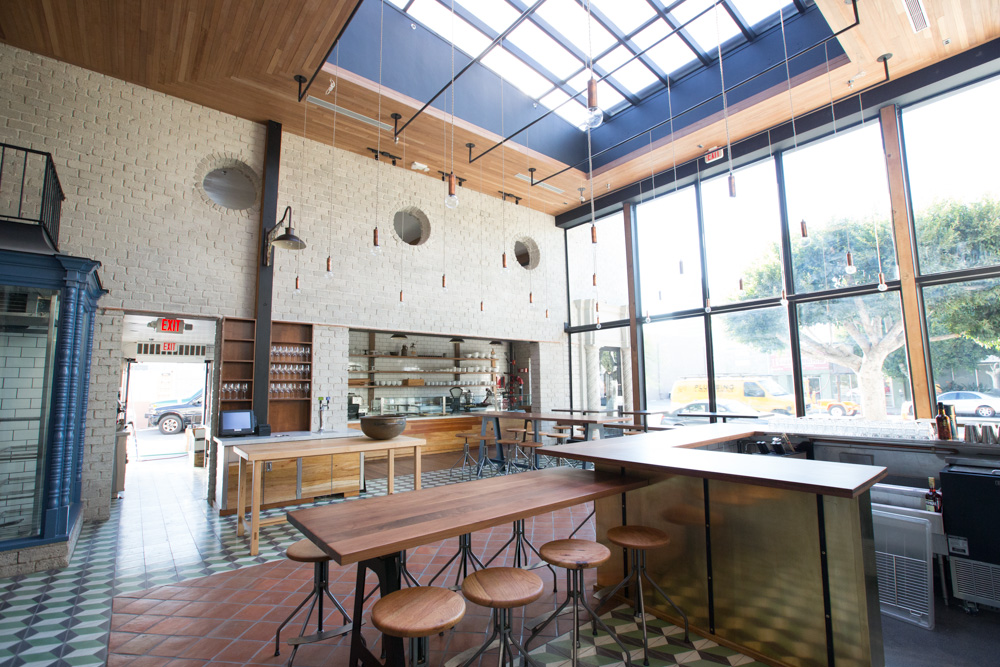 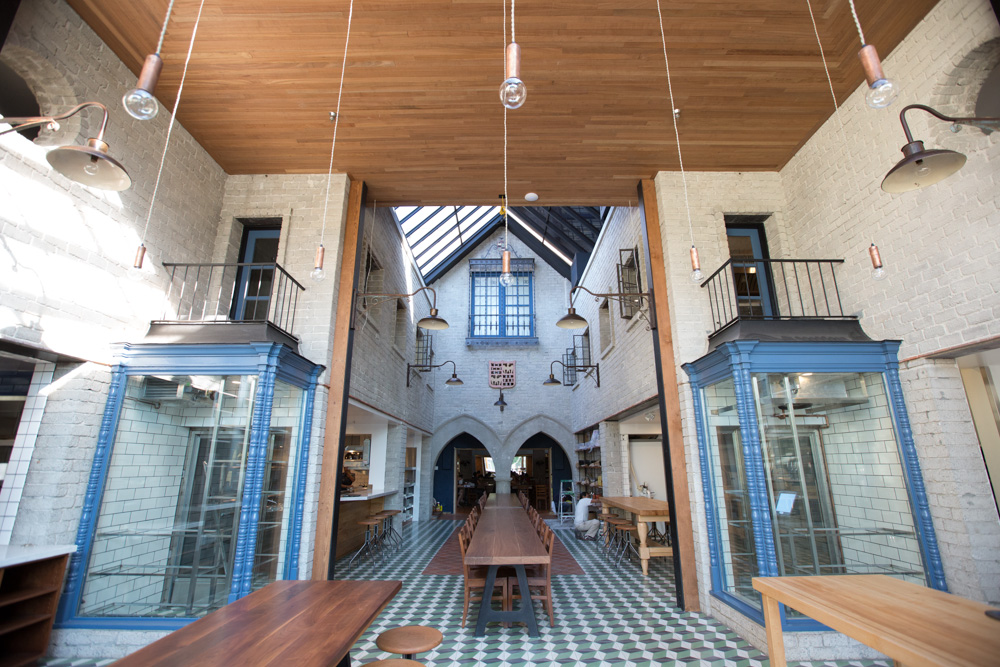 This brings us to Republique, the new tenant, which builds on Campanile's history to largely winning effect. Republique relies on the strengths of another husband-and-wife team, Walter and Margarita Manzke, who partnered with local star restaurateur Bill Chait and launched the venture in November. The space retains its Old Hollywood magnetism.Coming here never feels stale. It’s easily among the top five most beautiful restaurant spaces in LA. Charlie Chaplin, the story goes, constructed this stone-colored brick building as his office complex in 1929 and then lost it in a divorce settlement to one of his actress-brides. Chait and the Manzkes made some minor tweaks: They expanded the dramatic glass façade at the restaurant's entrance, and in the clamorous front dining room they laid green and white tiles that trick the eye like an Escher print.

The restaurant's name harkens to the bustling Métro station in the center of Paris. Walter Manzke, a Southern California native, mastered the French canon at high-profile gigs including glittery, defunct Bastide and downtown's Church & State. His menu at Republique presents a number of traditional Gallic pleasures: mussels and frites, escargot en croute, an Alsatian tart spread with bacon, raclette, and caramelized onions. But I wouldn't label this restaurant as French.At this point hardly anything about the menu conjures "French:" It’s a wholly Californian mix of Mediterranean, American, and occasionally Asian flavors. Intended or not, much of the food also comes straight from the Campanile playbook: flame-kissed proteins, of-the-moment salads, pasta tangled with seafood or filled with earthy purees. The most obvious parallel to the past is that Margarita Manzke, an exceptionally gifted pastry chef, sets up a daytime space to display her breads and pastries in the same wing of the restaurant where Silverton's masterpieces once drew long lines. 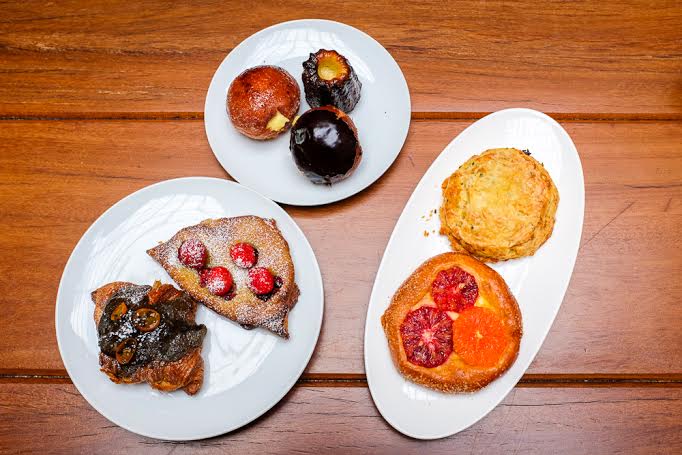 More on the sweet stuff in a moment. Wade into dinner at Republique with a collaboration from the Manzkes called "eggs on toast:"The eggs-uni-toast pleaser is at this point a restaurant signature, and if you’re trying to decide between it the eggs or the charcuterie, I say veer toward the eggs. rounds of baguette (textbook exterior crunch, still downy on the inside) overlaid with the most softly scrambled eggs and petals of uni, fresh from the waters of Santa Barbara, that arrive without a hint of the metallic funk so often present in sea urchin. Then tackle a board of house-made charcuterie, spread with a collage of salumi, rustic pâtés, and small crocks of pork rillettes and satiny duck liver mousse topped with diced pickled Asian pear. Order extra bread (it's worth the $3 charge) along with a novel side of pan drippingsThe baguette plus pan drippings now costs $7, and though that’s admittedly steep for bread and gravy I still can’t resist it. You’ll never finish all the pan drippings; take them home and serve them the next night as a side for roast chicken. from the wood oven—a beefy jus that's worlds better than the thin broth through which we swiped the French dip sandwiches of yore. Keep it around as embellishment for the bouquet of paper-wrapped fries that lands, as it should, on nearly every table. 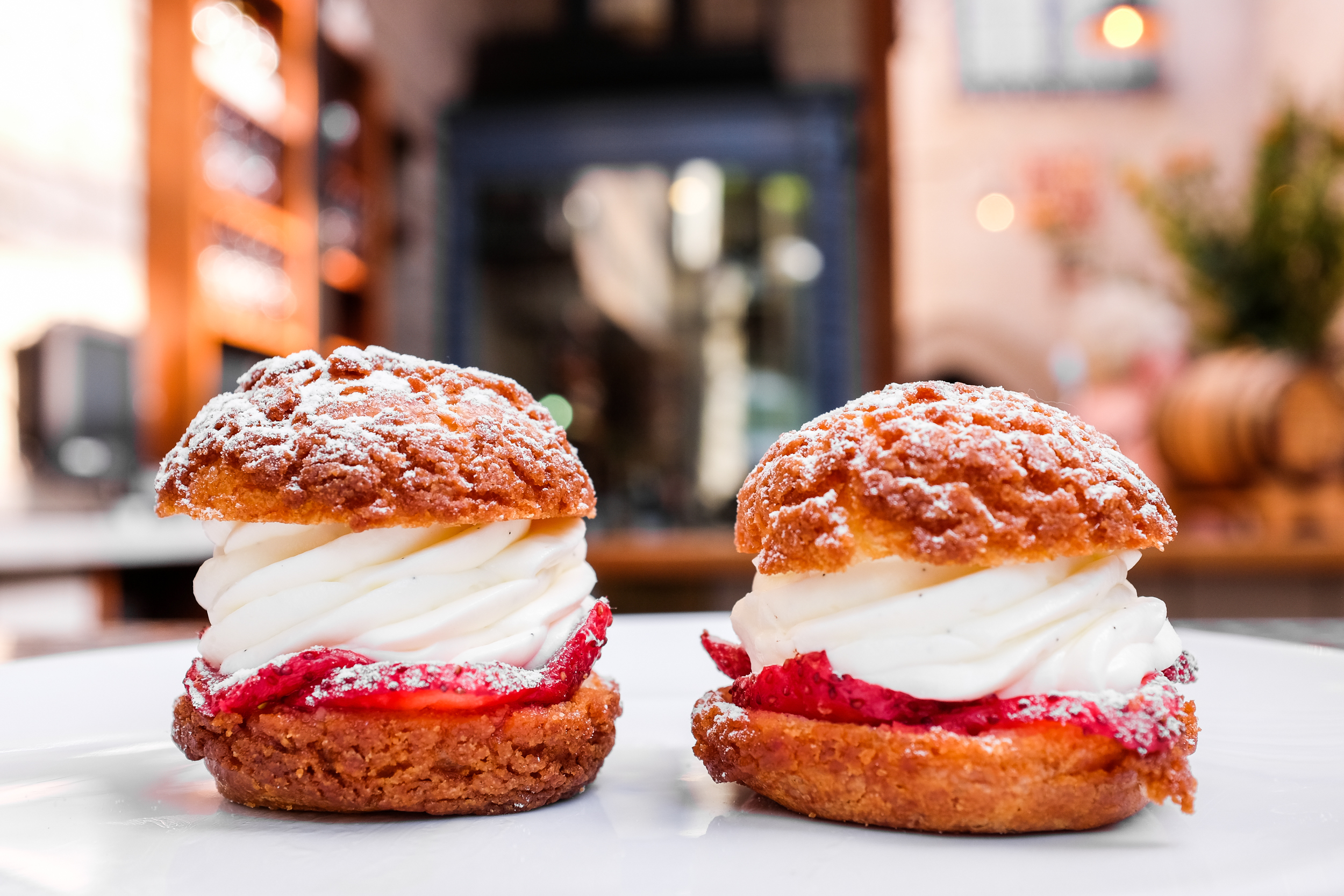 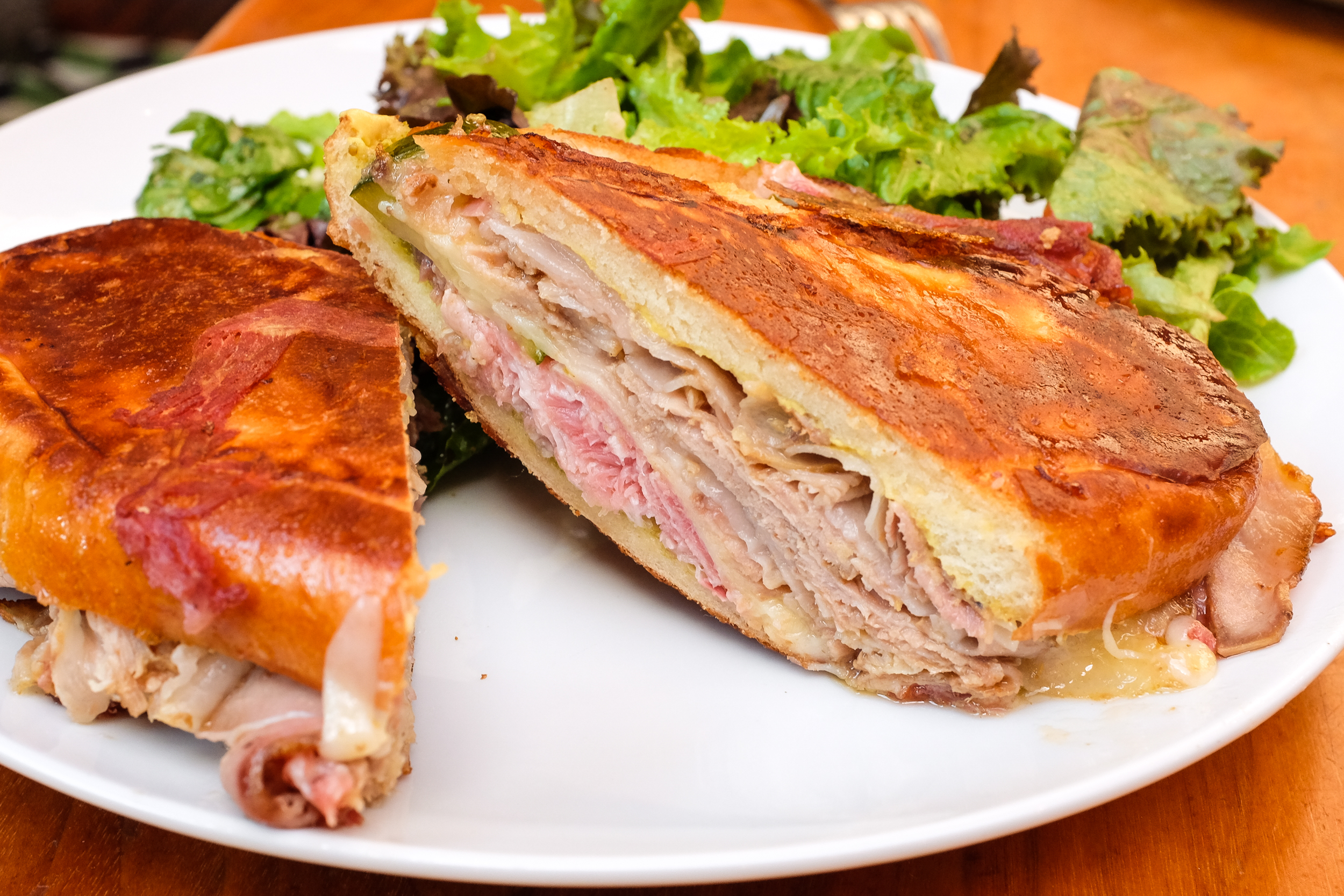 Strawberry cream puffs and a Cubano.

Shift gears with the raw spring vegetable salad:A recent autumn salad equivalent was a Caprese variation with Gioia burrata (the finest American version of that mozzarella hybrid), slivers of apple, and mild hunks of persimmon still possessing some bite. Peas pop between your teeth and lull around on the plate among arugula and parmesan. The vinaigrette croons a duet where hazelnut oil takes the tenor line and Meyer lemon tackles the high notes.

Now dive back in with the spaghetti rustichella,Another menu mainstay (though with ever-revolving seafood tangled among the thin noodles) and the one thing I would order every time I came here. This version showcased only Dungeness crab, with a backbeat of chile heat that highlighted its sweetness without overwhelming its delicate taste and texture. which was tossed with clams early in the restaurant's run but came paired with sweet, frilly strands of Dungeness crab during my recent dinner. Many of the entrees—branzino with gnocchi, pork chop with broccoli di cicco and polenta, lamb with roasted artichokes and salsa verde—mined the Italian lexicon. I was curious to experience Walter Manzke's cookingat its most French The meaty wonder at my most recent dinner was an impressive cassoulet, lush with pork belly and duck confit that enriched the white beans, and unorthodox but welcome roasted tomatoes atop that brought some welcome acidity. There was so much cassoulet that, after substantial servings at the restaurant, the friend with me fed her family of three with the dish the next night. though, so two of us shared 14 ounces of dry-aged côte de bœuf covered in a wild mushroom Bordelaise sauce that was glossy, but not sludgy.

A couple of savory dishes fell flat:Interestingly, two and a half years after my first take, I left my recent dinner with the same overall impression about the arc of the savory courses: the pastas and the full-throttle meat dishes impress more than the appetizers. The starter of roasted cauliflower with curried lentils, dates, preserved orange, and roasted hazelnuts sounded zingy and bright but tasted rather muted. And I'd probably reached my richness quota by the time I dug my fork into the hunk of pig's head with bacon and crowned with a frizzled-edged farm egg. I'm glad I gorged first on the more nuanced charcuterie. 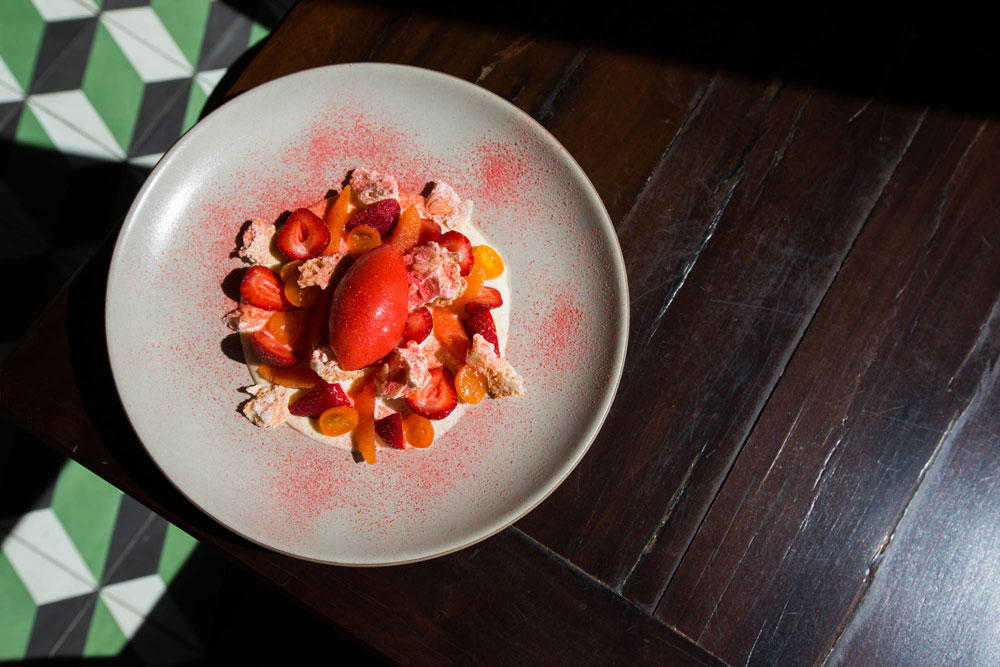 But, oh, the desserts. A fluffy mound of mascarpone sabayon buoyed just-ripe strawberries, Cara Cara orange segments, and a precise quenelle of potent strawberry sorbet. Confetti-like shavings of dehydrated strawberry around the plate added a subtle modern touch. There was nothing cutting edge about the dark wedge of chocolate cake with fudgy icing: It was downright patriotic in its hominess, and it made me want to try more of Margarita Manzke's handiwork.If you love desserts and are in Los Angeles, the sweets at Republique are mandatory: Margarita Manzke is at the top of her game, amazing with both plated dinnertime finales and the dazzling of array of daytime pastries spread along the front counter. Her team is particularly adept with treats like éclairs and cream puffs made with crisp, airy choux pastry. 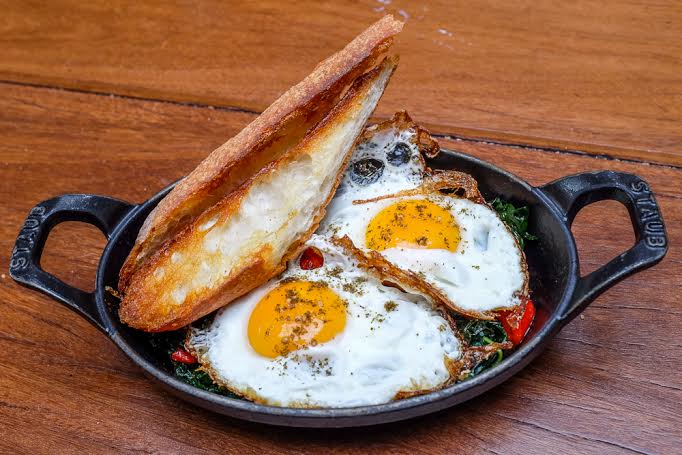 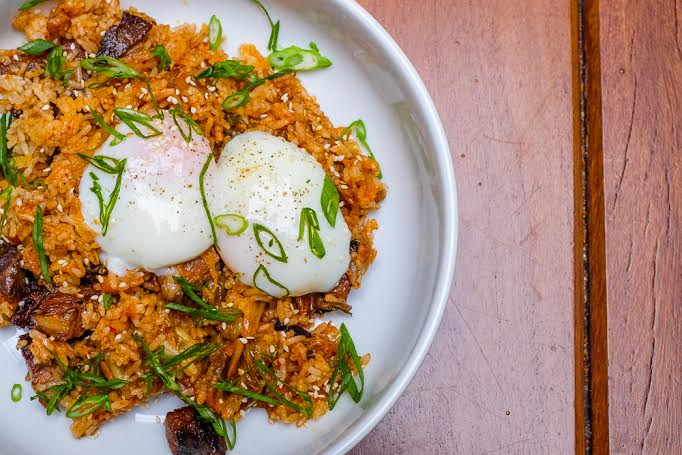 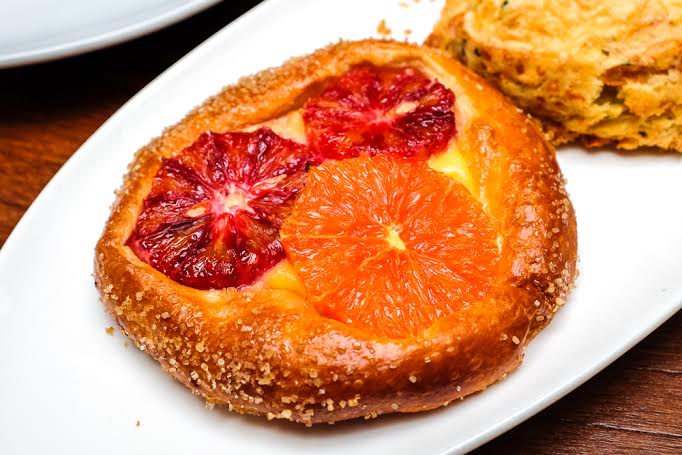 I returned to Republique on Saturday around 9:30 a.m. to find only a few people in line at the bakery. But what an array: croissants, tarts, hand pies, éclair-like bombolinis, sweet and savory danishes, fruit bread with plump raisins bursting from the crust. Why wasn't the place mobbed?Consider the restaurant  officially mobbed at this point in its history. Republique now serves breakfast and lunch daily from 8 a.m. to 3 p.m.. Breakfast jumbles sweet and savory dishes — waffles, ricotta toast, shakshouka, smoked salmon tartine — and the lunch menu (available after 11 a.m.) leans heavy on salads and sandwiches. I wolfed down both the dry-aged beef burger and a thick, zingy take on the Cubano. Apparently, the Manzkes have launched this part of their operation quietly, but I expect to find people trailing out the door the next time I return. The pastries are exquisite, never too sweet and finely tuned in texture and flavor. I'll be back especially for the custardy blood orange tart and the croissant filled with black sesame paste—and for another helping of Walter Manzke's feisty kimchi fried riceThe kimchi fried rice still delivers; even better on the breakfast menu (available until 3 p.m.) is arroz caldo, a gingery, garlicky version of congee with pork and egg that hearkens to Margarita Manzke’s Filipino heritage. with short rib chunks and poached eggs, a highlight of the brunch menu.

Will Republique spark the kind of revolution in American dining that Campanile did? Probably not. What I couldn’t see back in 2014 was how more and more ambitious chef-restaurateurs would embrace all-day dining, or "double-duty restaurants" as my Eater colleague Hillary Dixler has called them. These places offer not just, say, different lunch and dinner menus, but options tailored for various needs of their community — quick counter dining during the day, for example, and more formal meals in the evening. While restaurants across the country increasingly experiment with this format, Walter and Margarita Manzke have already proven themselves accomplished trendsetters. But it's nonetheless a promising successor helmed by two standout talents.

Bill Addison is Eater's restaurant editor, roving the country uncovering America’s essential restaurants. Read all his columns in the archive.